Part 2: A Monument for the Age of Air Travel 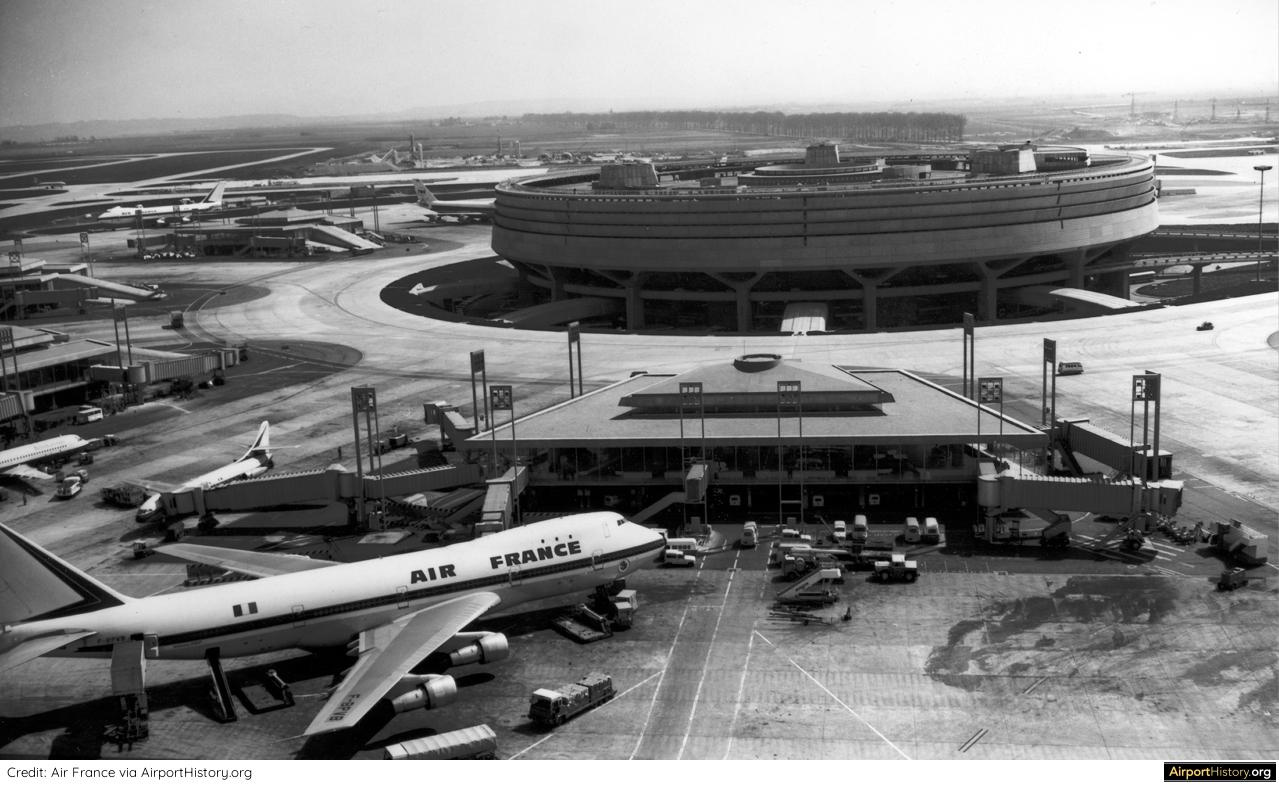 Welcome to Part 2 of our history on Paris Charles de Gaulle Airport. In this Chapter, we'll show many rare and amazing images of the construction and early years of 'CDG'. We'll also learn how critics responded to the airport's spectacular and unconventional design, as well as issues that arose early on. Finally, we look at some of the early developments and milestones, such as the start of Concorde flights.

Did you miss Part 1 about the planning of Paris de Gaulle Airport? Read it here.

In December 1966, site preparations commenced. Construction activities started in August 1968 with the roads and the bridges over the motorway A1. Work on Aérogare 1 started the following month.

A circular hole of 820 feet (250 meters) in diameter and 65 feet (20 meters) was dug and more than 3.5 million cubic feet (a million cubic meters) of excavated material was extracted.

The runway was inaugurated by the Ministry of Transport on September 9th, 1971. The earthworks of Runway 2 were started in 1972.

By September 1973, construction was finished and a few aircraft had landed -some by mistake. Originally named “Paris Nord”, and later “Roissy”, in October 1973, it was decided that the airport would be renamed after legendary French President Charles de Gaulle, who had died four year prior.

​The airport was assigned the IATA code 'CDG', which would become one of the most recognizable airport codes in the world.
GALLERY: CONSTRUCTION 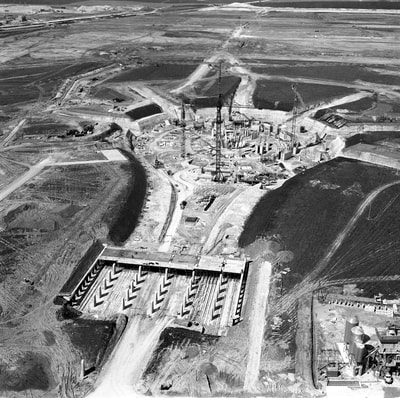 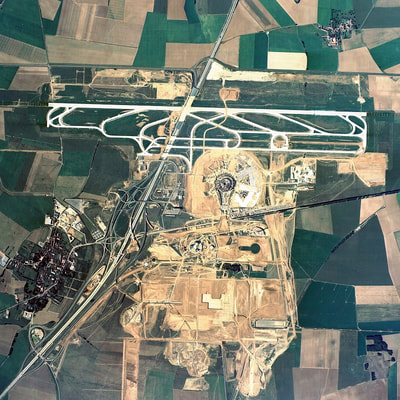 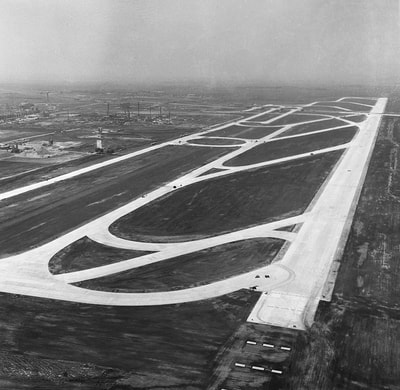 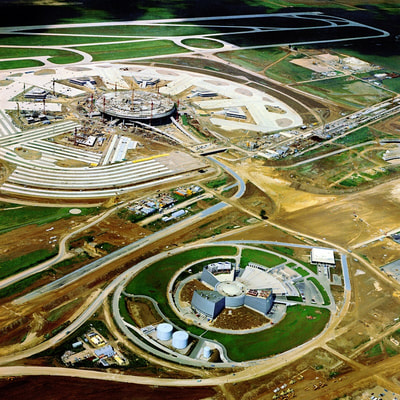 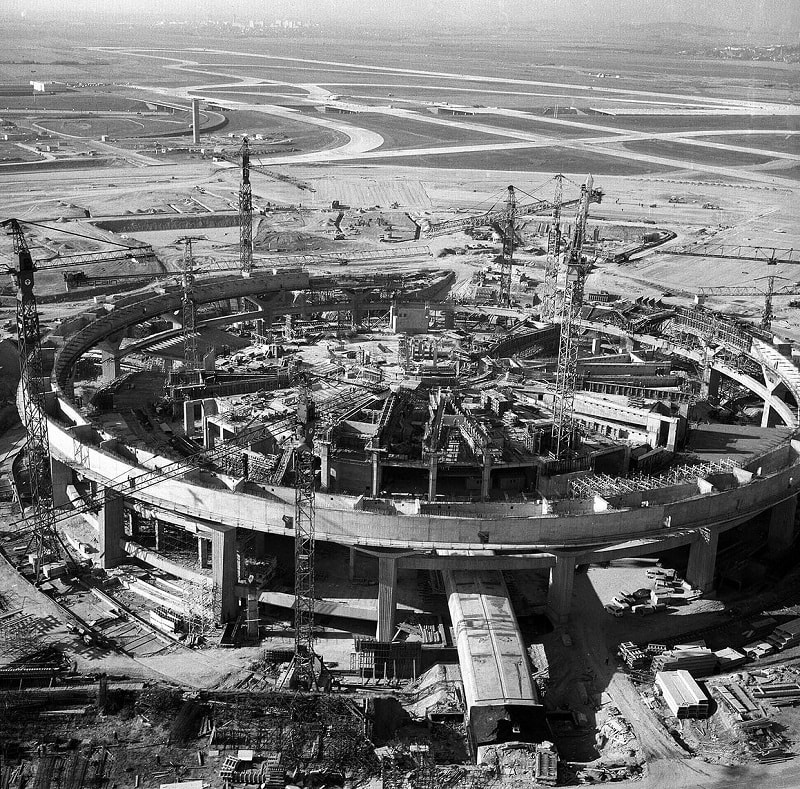 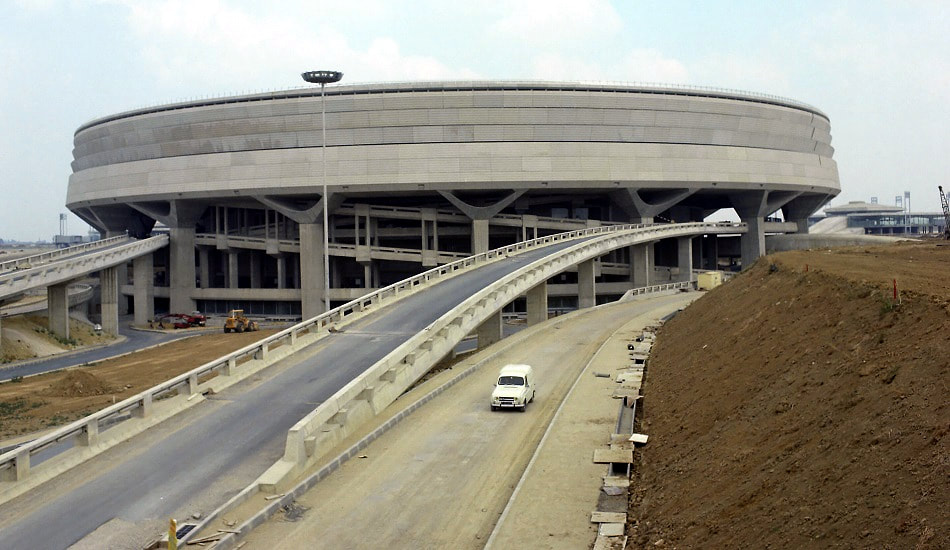 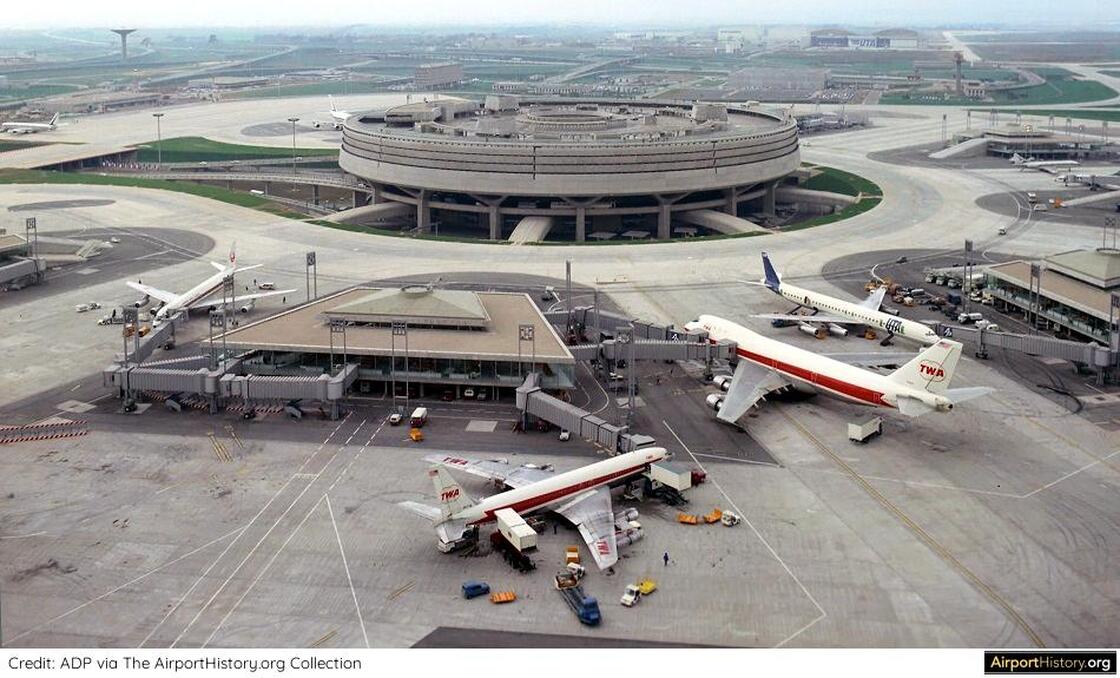 A 1976 aerial view of Aérogare 1. Each of the seven satellites was equipped with seven boarding bridges and could service five aircraft, including four Boeing-747 aircraft. TWA was one of the major foreign operators at CDG. Also visible are DC-8s belonging to Japan Airlines and UTA, which was France's second long haul airline until its absorption into Air France in 1992. Credit: ADP
IMAGE GALLERY: AERIAL AND EXTERIOR VIEWS 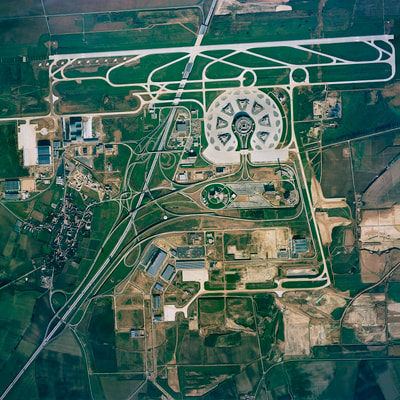 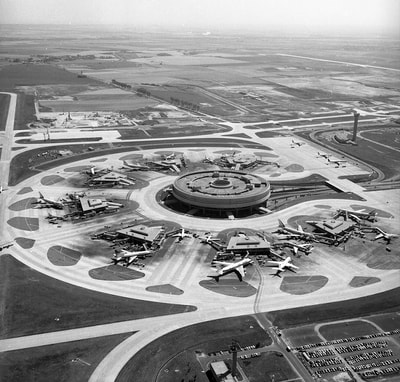 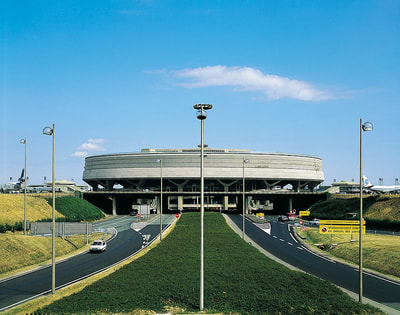 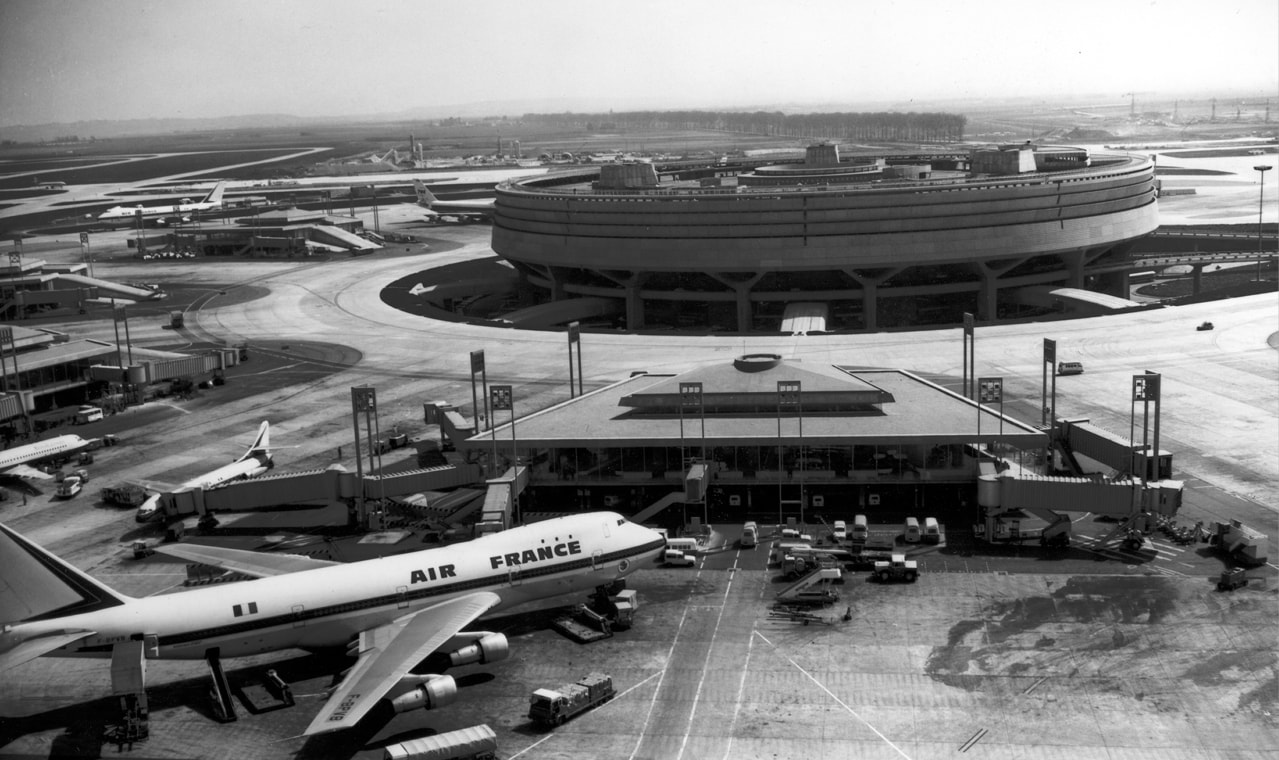 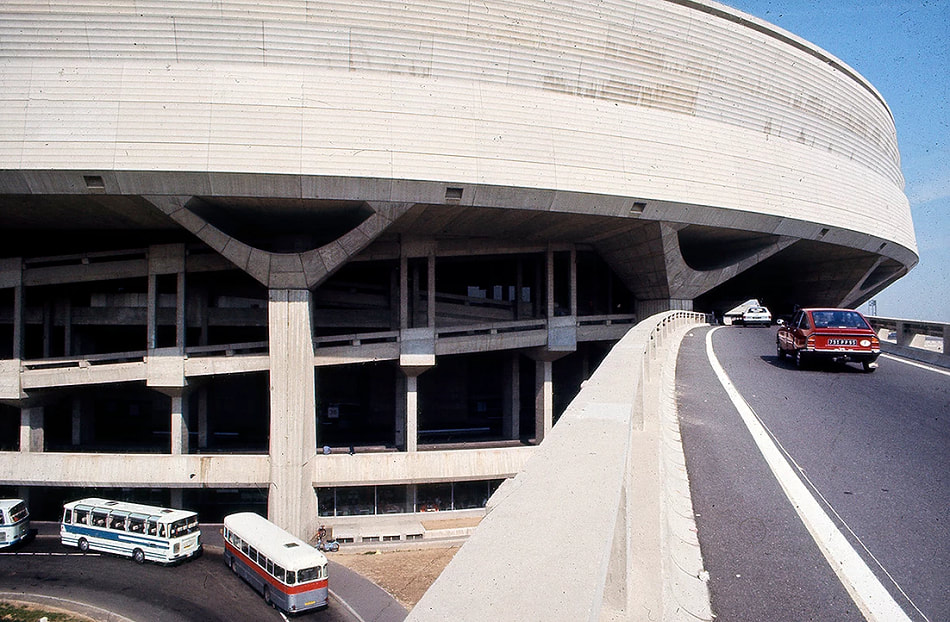 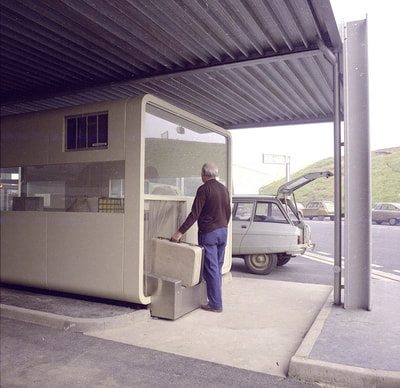 RECEPTION
​
At the time, Aérogare 1, which had quickly earned the nickname ‘le Camembert’ (a French round, soft and creamy cheese), was presented as a state-of-the-art airport for its design and operations. Aérogare 1 was described by some as strange, surrealist, fantastic, functional, practical and sober by others.
GALLERY: AEROGARE 1 - INTERIOR IMAGES 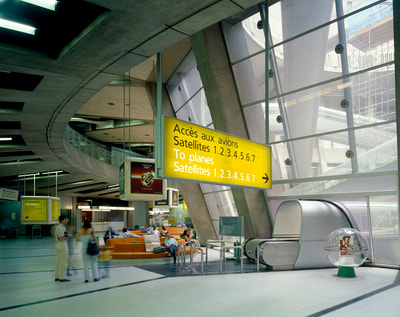 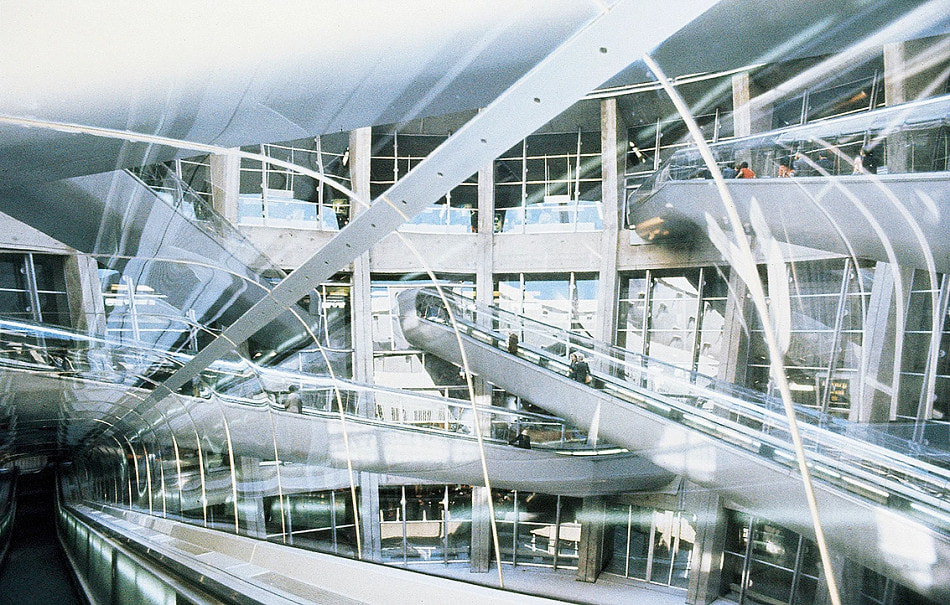 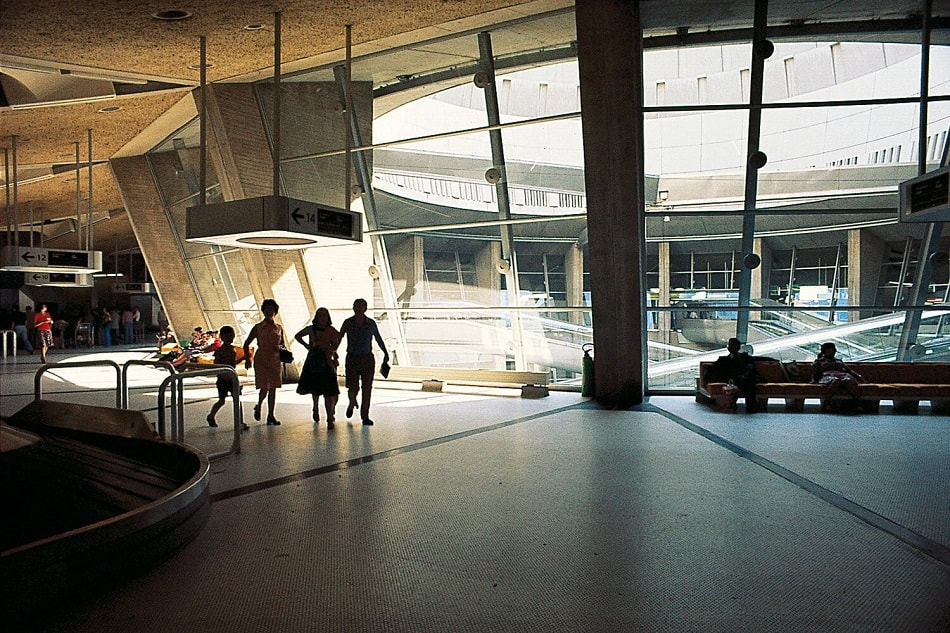 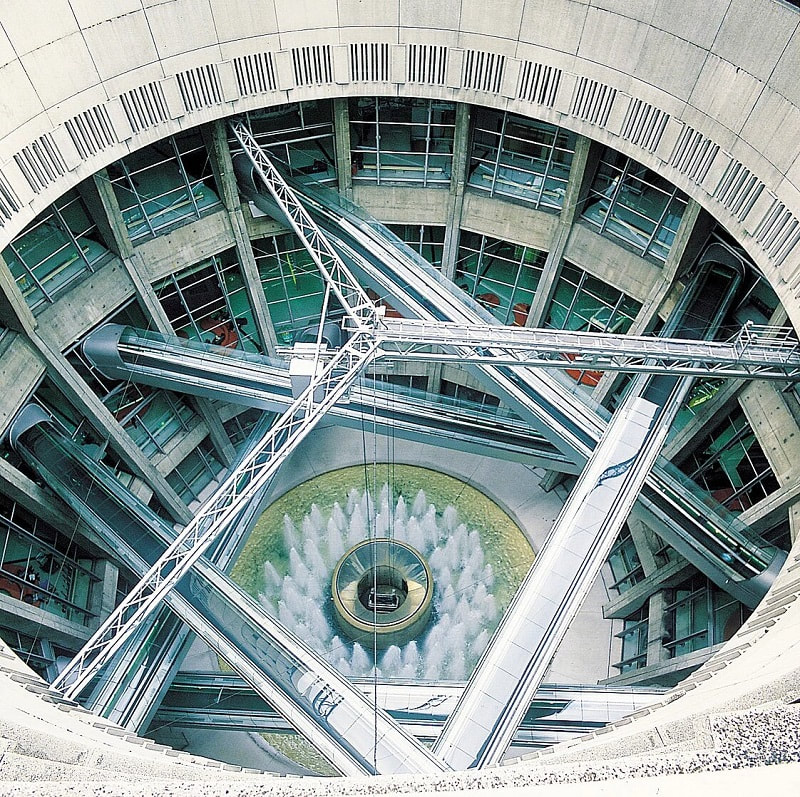 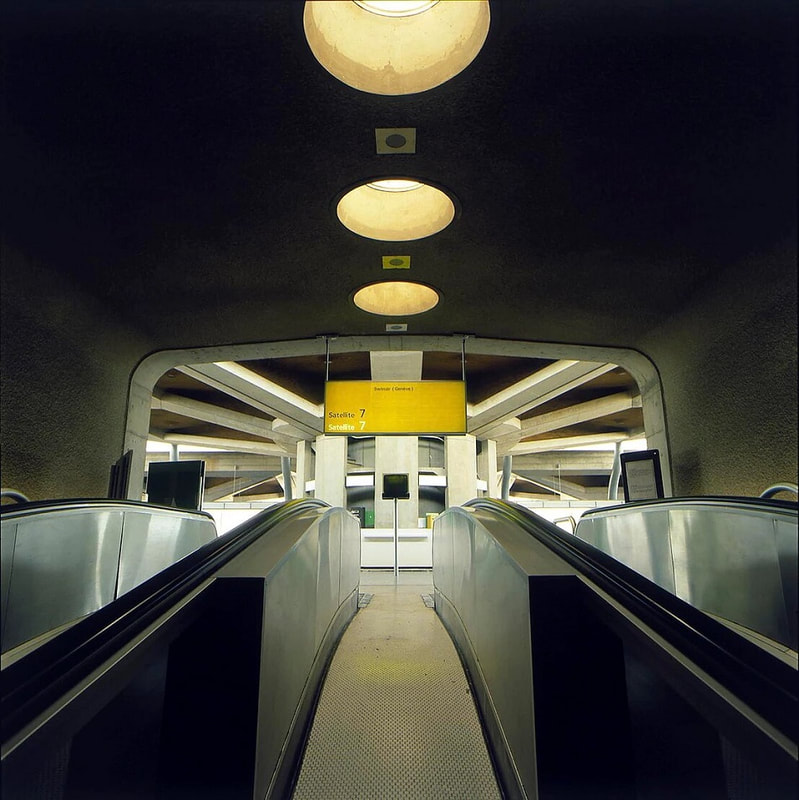 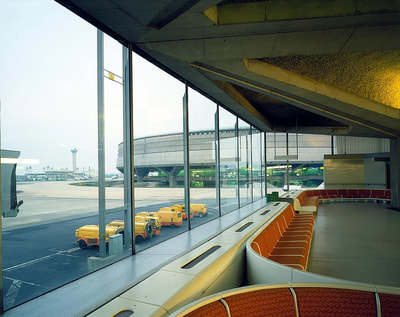 ​​BAGGAGE SYSTEM ISSUES
​
The biggest problems were presented by the semi-automated baggage system. A consequence of the design of Aérogare 1 was that the routing of the baggage was somewhat complicated.

​After being checked-in baggage was taken down by lifts to the basement, where it was automatically sorted. It was then manually loaded onto containers which were taken to the satellites on trucks pulled by electric tractors that ran through tunnels.
GALLERY: OTHER FACILITIES 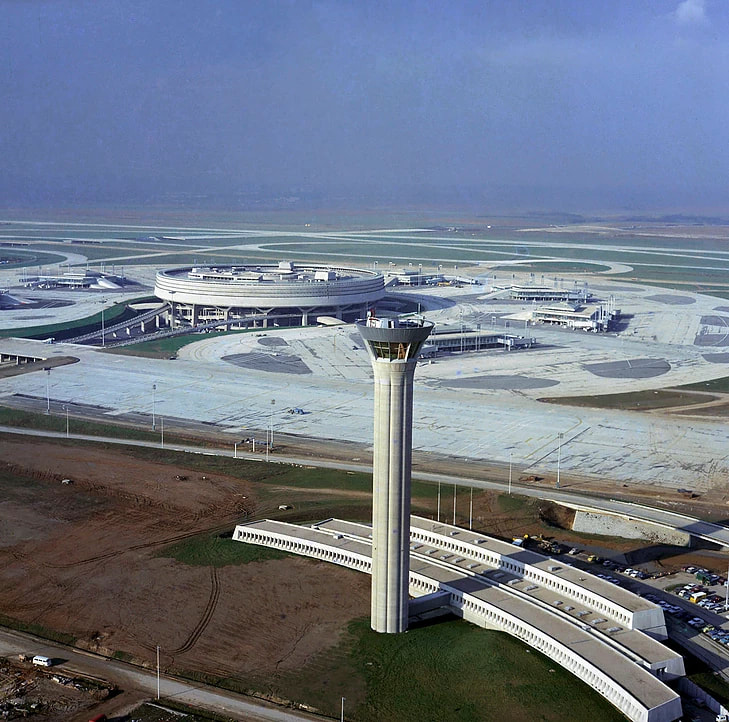 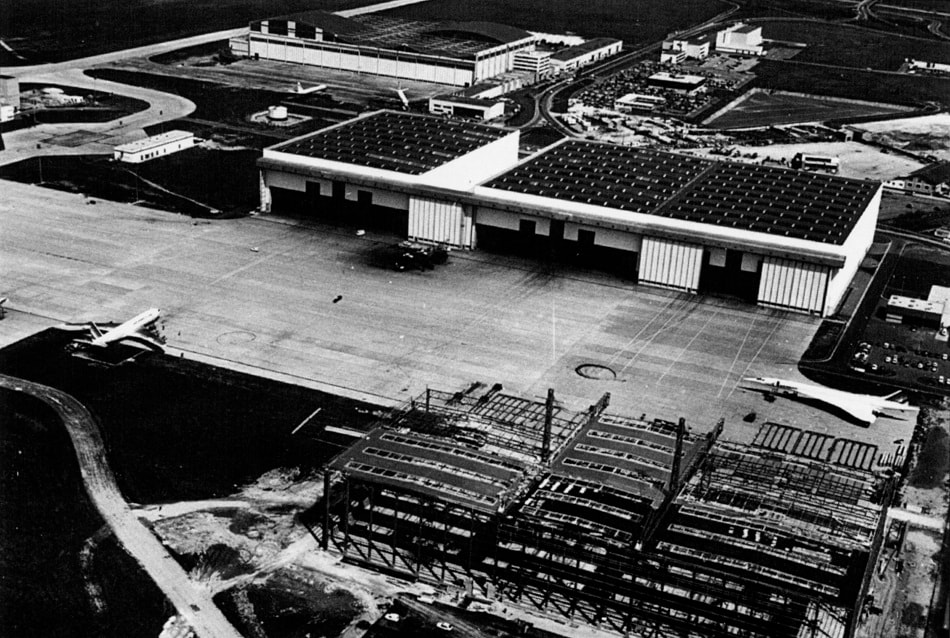 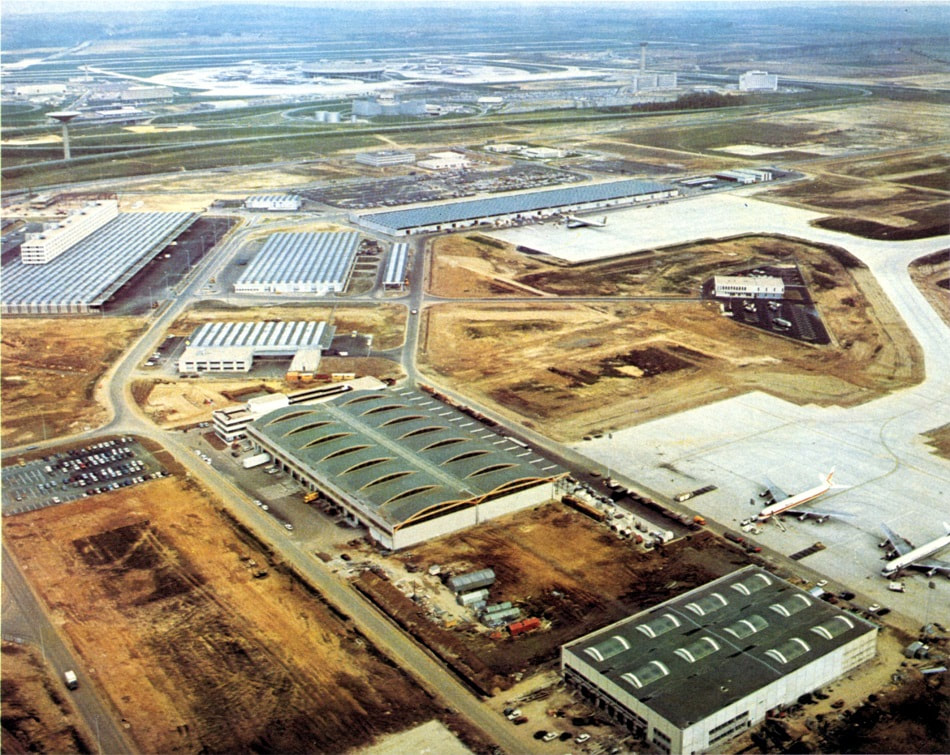 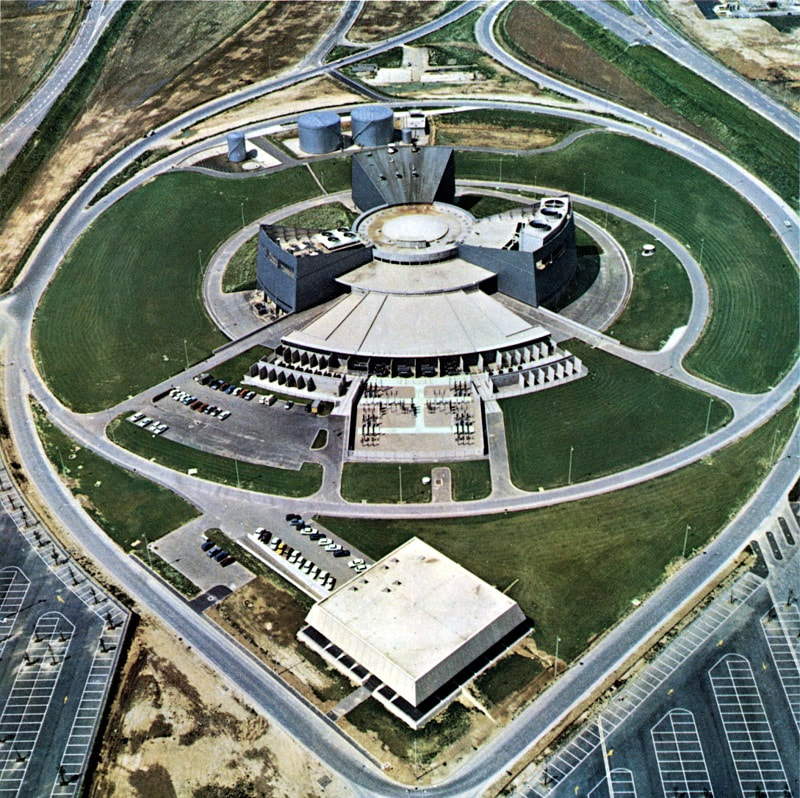 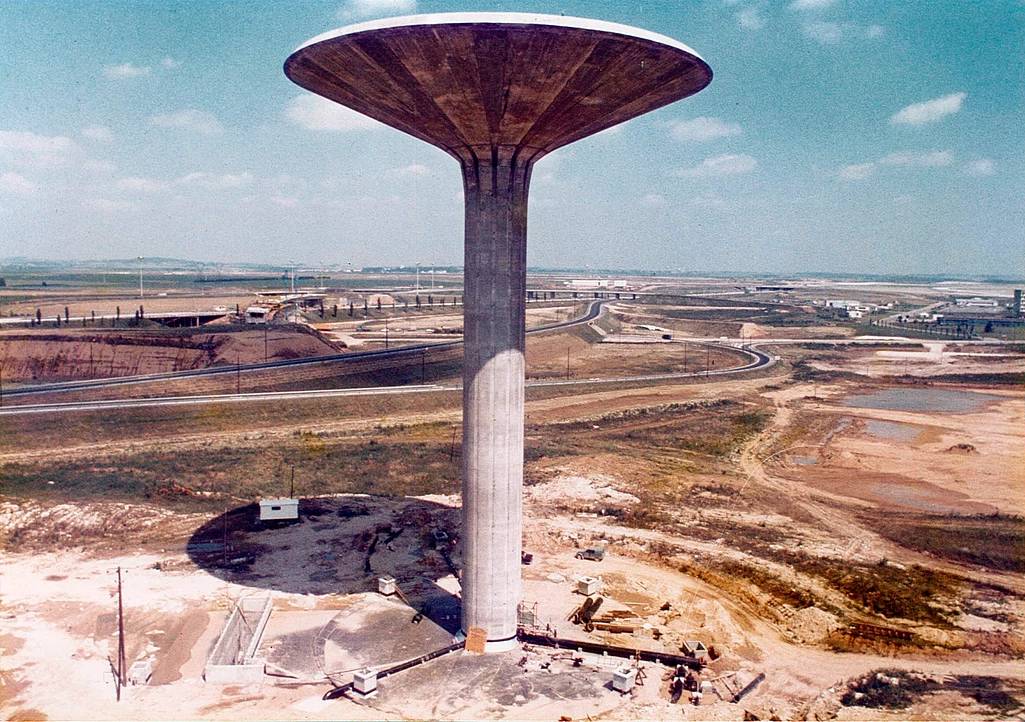 In 1976, Charles de Gaulle handled 7.5 million passengers and opened a second runway. Initially, the second runaway was built at a reduced length of 9,400 feet (2,900 meter) and without a parallel taxiway. It was only used as a backup when the main runway was inoperative or at the instruction of air traffic control. The runway could be built out to its full length of 11,800 feet (3,600 meters) and taxiways added when traffic demand required.

The station, location at the 'Central Unit', had evolved from a single building housing many functions, into a conventional railway station situated at the heart of a cluster of hotels and offices.

The "Aérotrain", the high speed hovertrain that was to connect de Gaulle and Orly airports, was abandoned in July 1974, as the projected ridership would never have been able to offset the huge cost of construction. It would be another 20 years before the airport would be connected to the conventional high-speed train (TGV) network.
GALLERY: ROISSY RAIL STATION 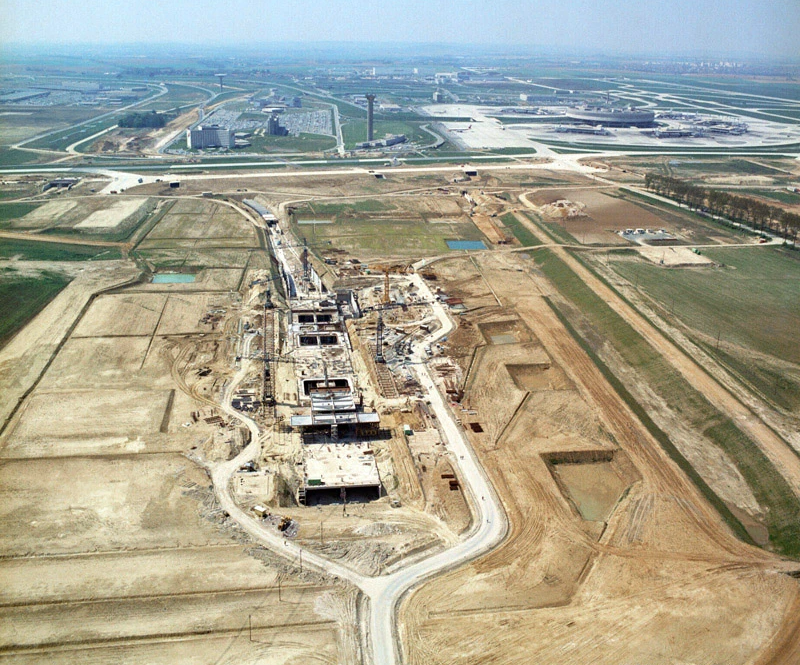 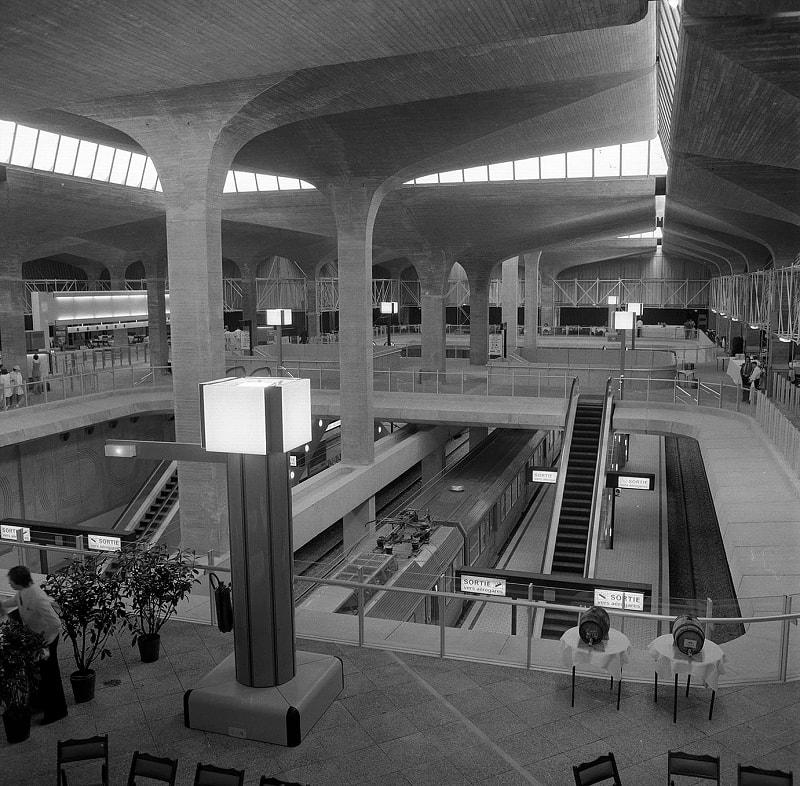 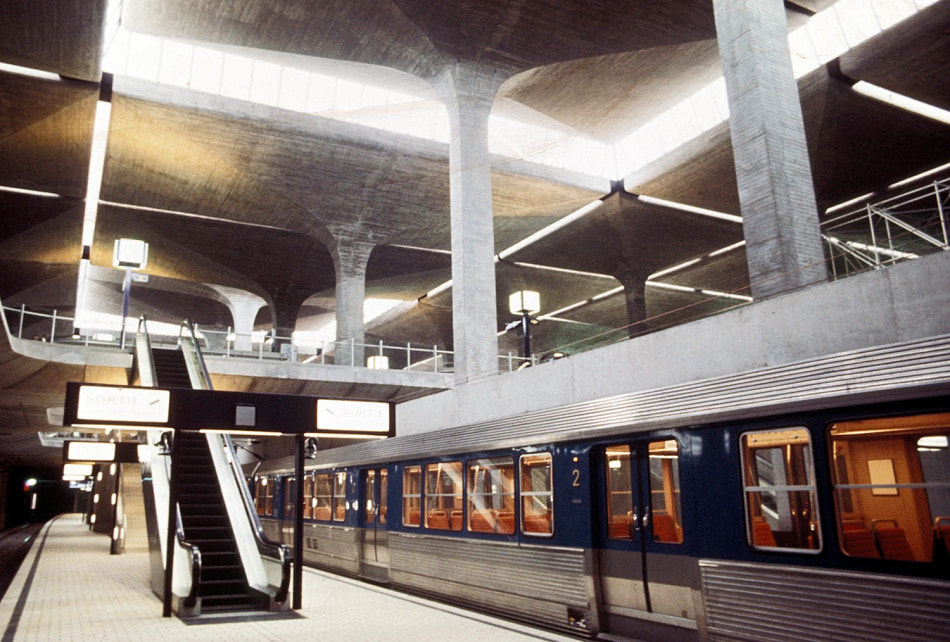 CARGO EXPANSION
​
CDG was rapidly developing into an important cargo hub. In 1977, the airport handled 247,000 tonnes of cargo, almost twice as much as Orly, which in terms of passenger traffic was still the busiest of the two. During 1977, Air France opened its own cargo terminal in two phases.

​First to come into use was the dock building, which was used for large shipments. The state-of-the art facility provided three contact stands for B747 freighters, which could be directly loaded through the nose. Second phase was a warehouse located adjacent to the dock building. The entire unit covered 81.5 acres (33 hectares) and could be greatly enlarged. 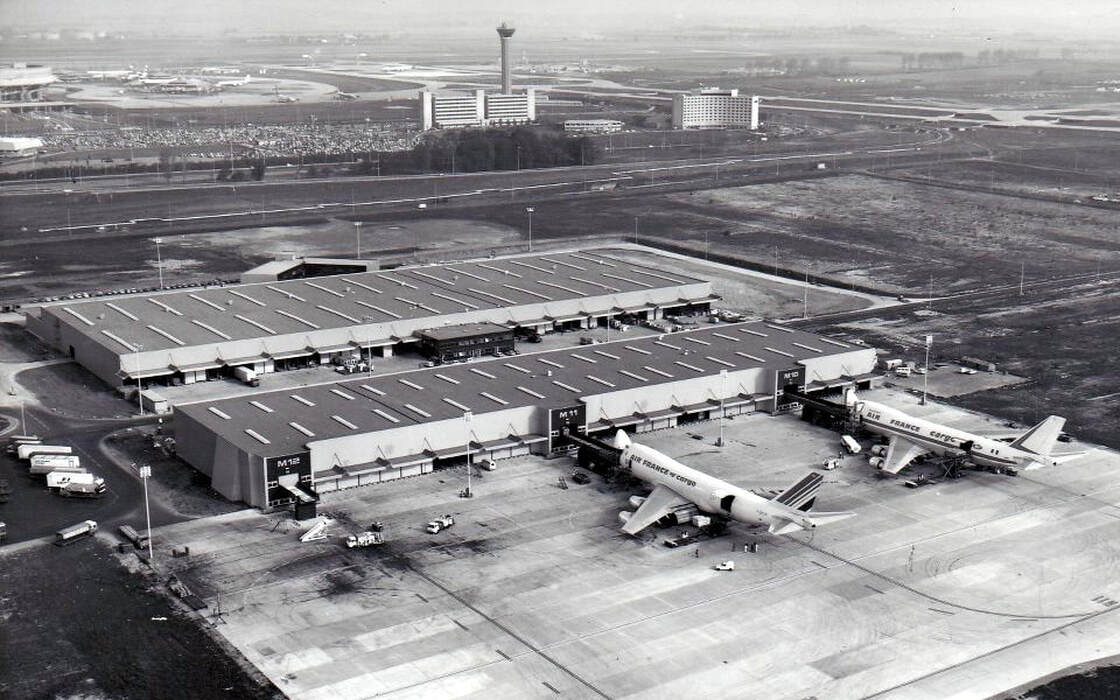 To be continued in Part 3!

This concludes Part 2 on our history on Paris Charles de Gaulle Airport. Part 3 - to be uploaded soon - we will see how the planners had to rethink their approach for the second generation of terminals.

Did you miss Part 1 about the planning and design of Paris the Gaulle Airport? Read it here.

​Did you visit CDG in the early years? Tell us about it below!