95 Years of Historic Firsts at CLE 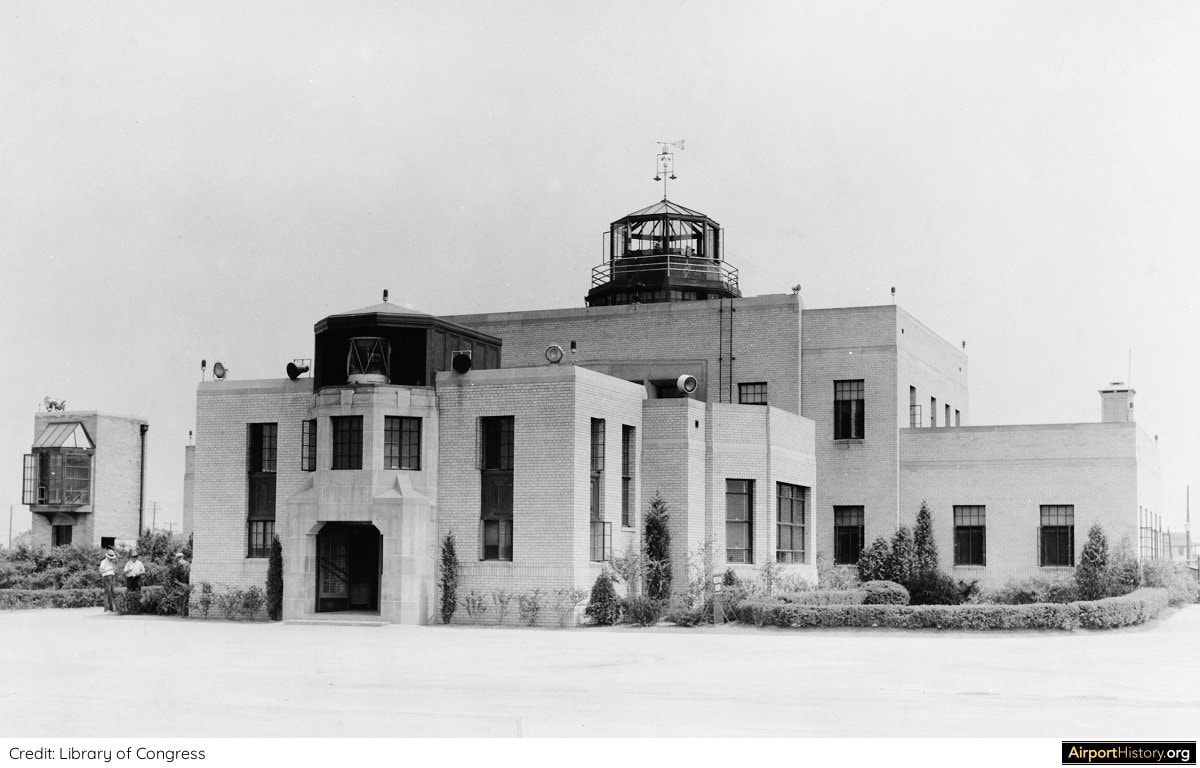 On July 1, 2020, Cleveland Hopkins International Airport will celebrate 95 years of service to Northeast Ohio and the world. Cleveland Airport may not be on the radar of our airport loving fans, let alone our readers from outside the US. However, this airport has a very historic past including numerous "firsts" and technological innovations. Cleveland's historic firsts, which are not widely known, are:
​
Let's have a look at these achievements in depth, along with a selection of images showing the evolution of Cleveland Hopkins Airport through the years!

Commercial aviation in Cleveland began almost seven years before Cleveland Municipal Airport opened in 1925. The first regular airmail service was started in December 1918. However, Cleveland’s two existing privately owned airfields were not equipped for night flying and the city was in danger of losing its important airmail stop.

Visionary Cleveland City Manager, William R. Hopkins, after whom the airport was named in 1951, began the search for a more appropriate airfield, which could accommodate future growth. The current site on the southwest side of Cleveland was selected, and in January 1925, a $1,250,000 bond issue was approved by city council for land acquisition and construction of an airport.

Only seven months after the bond issue, the new airport opened for business (how quickly things moved back in the day!) in a public spectacle that attracted 100,000 visitors. The first mail plane of the day, a World War I surplus DeHavilland DH-4, landed at 8:30 p.m. from Chicago and continued on to New York, inaugurating night air mail service between the cities.

​Air freight between Detroit and Cleveland started with the first car (disassembled) flown to Cleveland from Detroit by the Ford Motor Company on July 11, 1925, and assembled right at Cleveland Airport. However, it took over two years before Stout Air Services (formed out of the Ford Motor Company’s flying division) operated the county’s first scheduled interstate passenger service between Cleveland and Detroit on October 31, 1927.
Two technical experts, hired by the Post Office Department, came to Cleveland in 1925 to help establish adequate landing facilities. They were Major Jack Berry, the first airport commissioner, and Claude F. King, a lighting and radio expert who eventually became the second commissioner.

Berry foresaw the benefits of commercial aviation and became a respected national expert on airports. While Berry never flew, he respected fliers and knew what they wanted and needed to fly safely. For example, he stated, “Pilots don’t like crosswinds. Let’s pave the whole damn field and they can land any direction they want to.” This was done. A huge landing mat was built instead of conventional runways.
​
King invented, constructed and installed the first airport control tower in 1930 (which was eventually replaced in 1956, in 1988, and in 2015 with the present tower). For the first time, radio communication was used to direct air traffic using equipment borrowed from the United States Coast Guard. 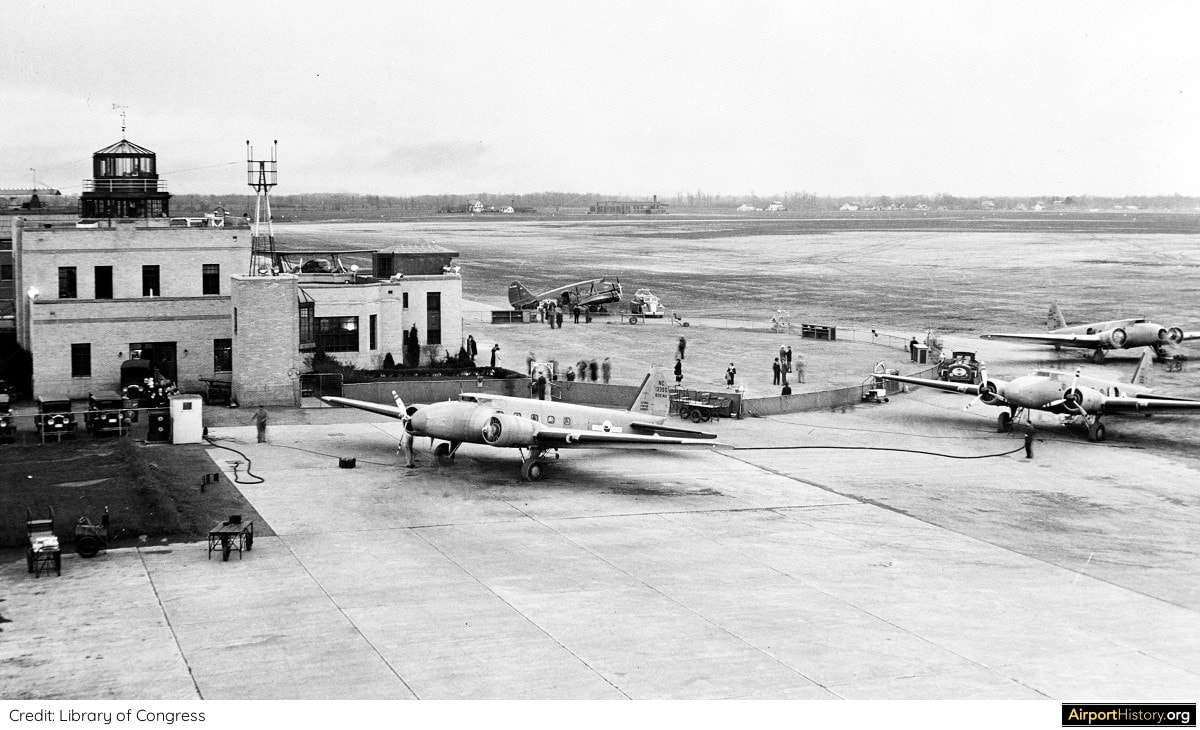 A 1936 view showing the terminal and ramp, which is being dominated by United Airlines Boeing 247s.
However, night operations at airports were still tricky, so Berry and King acquired a huge marine search light in 1930 to illuminate the field. The intense light was so blinding that a man was required to walk in front of the beam to shield the cockpit from the light.

​King solved this problem by developing and installing a light bar, which provided a remote-controlled shadow for the pilots. Parts of this lighting system and the first control tower are at the Smithsonian Institution’s National Air and Space Museum in Washington, DC.
Due to the city’s huge airfield, Cleveland was selected as the site for the first National Air Races and Aeronautical Exposition over August-September 1929. The Air Races drew hundreds of thousands of spectators each year, and attracted the likes of Charles Lindbergh, Jimmy Doolittle, Rosco Turner, and Amelia Earhart.

​The National Air Races were suspended during World War II and finally ended in 1949, after a tragic accident in which a P-51 Mustang crashed into a nearby home, killing the pilot and two residents in the house. Their legacy continues, however, with the annual Cleveland National Air Show, held each Labor Day weekend. 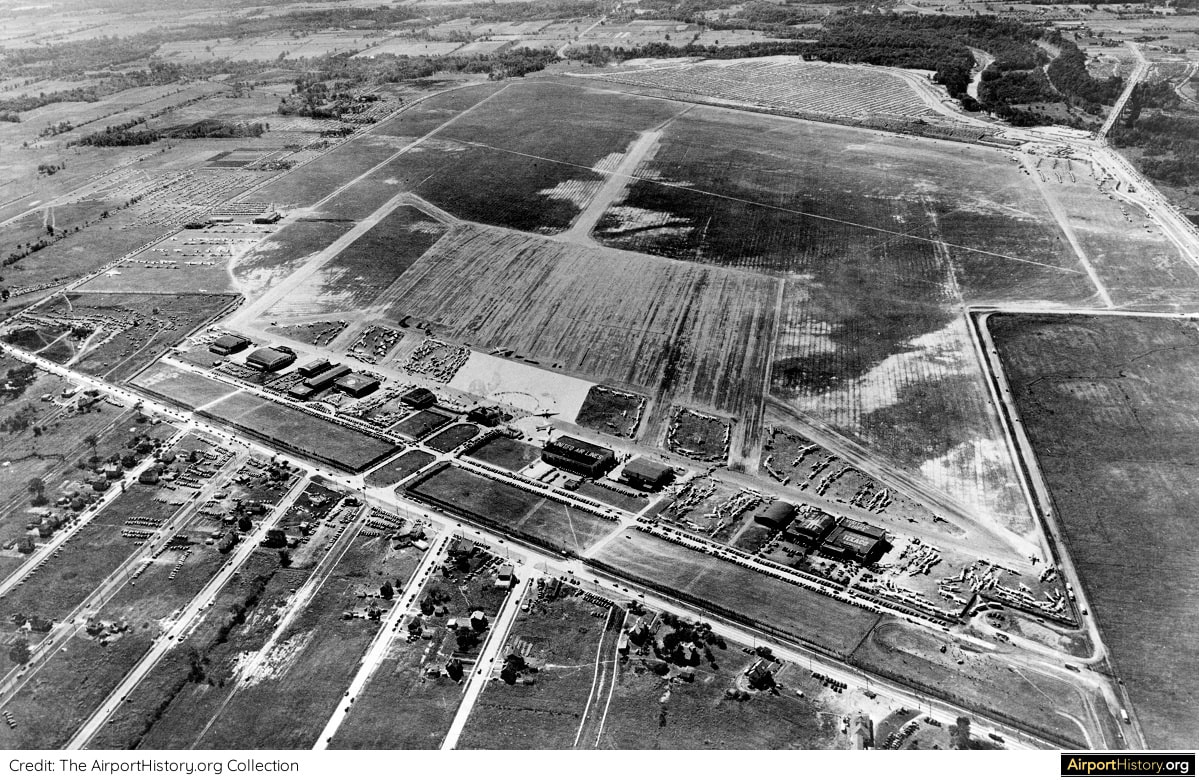 A September 5, 1938 view looking west, during the National Air Races of that year. 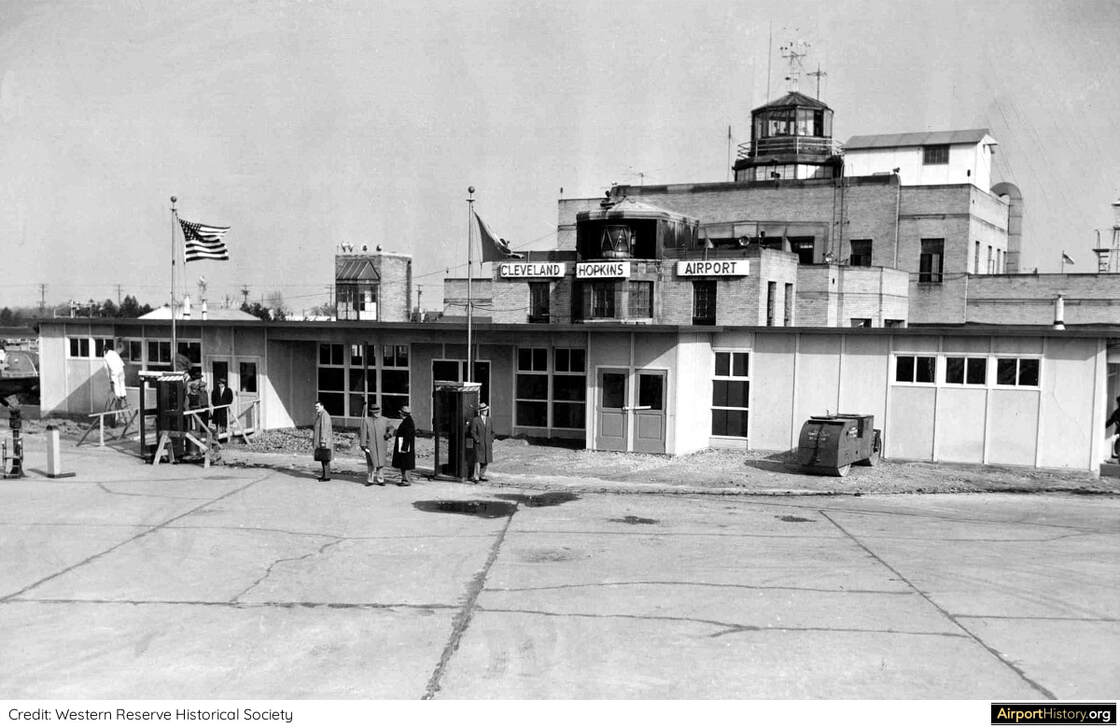 The hugely outdated old terminal at CLE in 1956 prior to the opening of the Jet-Age terminal.

Post-World War II growth at the airport made the original terminal quickly obsolete. Plans were drafted by the local architectural firm of Outcalt, Guenther & Associates for a brand new $4.3 million modern terminal.

Claude King continued his innovations, designing the world’s first centralized electric information board in the new terminal that opened in 1956. Information on up to 32 flights could appear at the same time, with information updated regularly from air traffic control and the airlines.

​Today such boards, or their electronic successors, are used in most every major airport in the world. Despite this innovation, it took Cleveland decades after the 1970s-era terminal replaced the 1950s terminal to again install a centralized flight information display system. 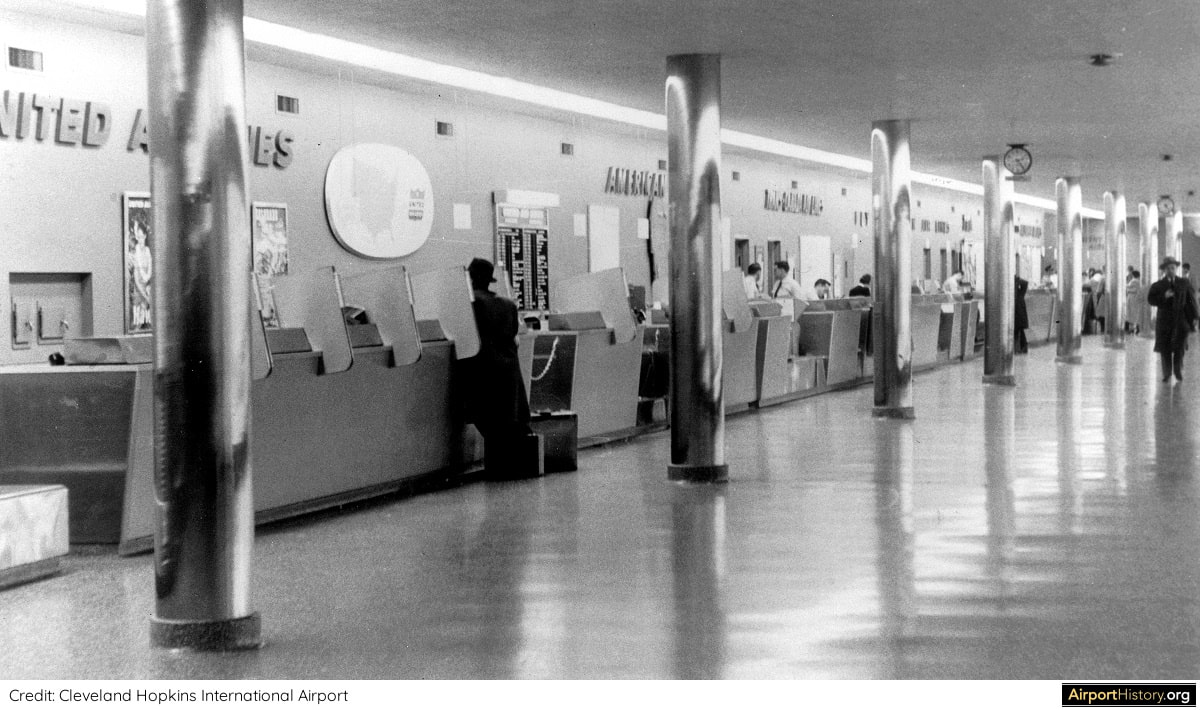 A view of the ticketing/check-in hall in 1957.
The 1960s saw a furtherance of Cleveland airport “firsts.” The first emergency medical technician program at an airport was established at Hopkins in 1965. And the first direct rapid transit link from an airport to downtown of any North American city was launched on November 15, 1968 by the Cleveland Transit Authority.

​Today, the Regional Transit Authority’s Red Line operates from a renovated station in the lower level of the airport terminal. The 30-minute ride downtown costs only $2.50 and runs approximately every fifteen minutes.
Despite all these historically significant developments, Hopkins Airport did not expand as much or as quickly as other airports after the 1960s. While other cities built new airports in less developed areas, Cleveland Hopkins remains in its original landlocked location. There were (somewhat fanciful) plans to build a new jetport offshore in the middle of Lake Erie (see above), or in Ravenna, but those plans never came to fruition.

​Serious social and economic problems racked the city in the late 1960s and early 1970s and diverted the attention of the city’s leadership away from long-term, commercial aviation concerns. Nonetheless, a major expansion and modernization of the terminal facilities was undertaken in 1973 and completed a decade later. 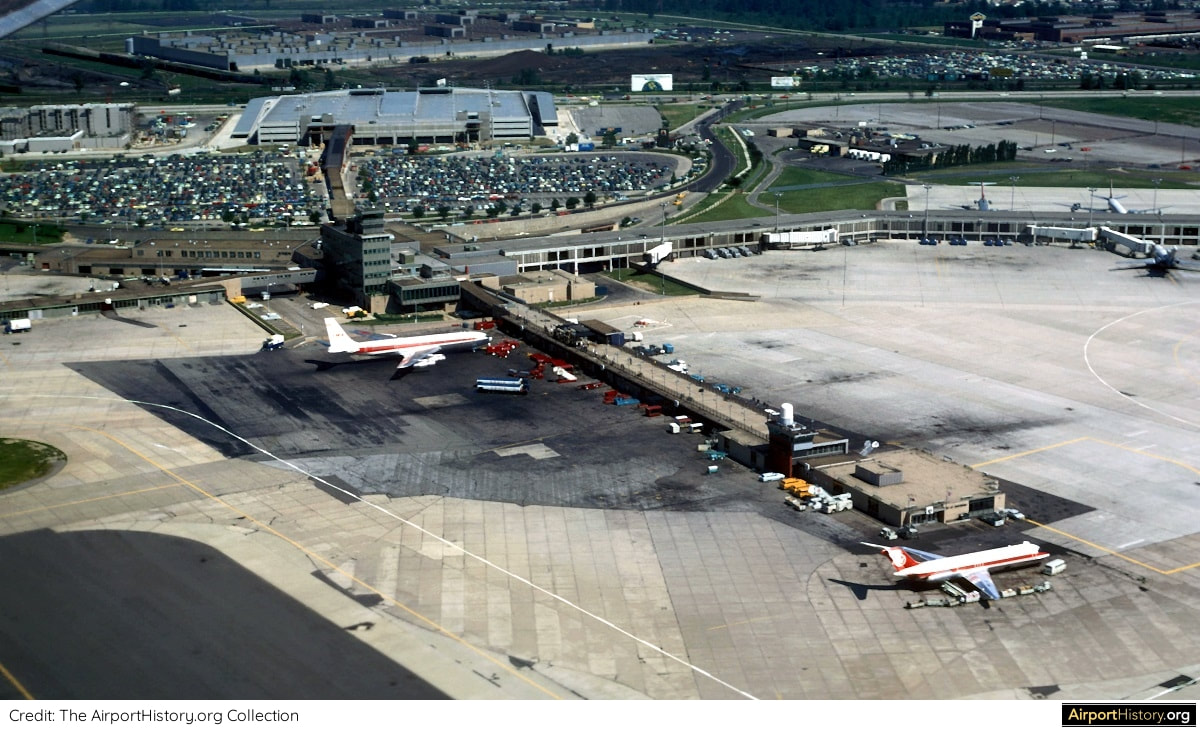 A 1971 aerial view looking southeast. Visible to the right is Concourse C, which was opened in phases in 1969. Concourse C was equipped with all the latest conveniences, including boarding bridges. These were fitted on Concourse A (left of image) in 1979 and Concourse B (middle of image) in 1982. 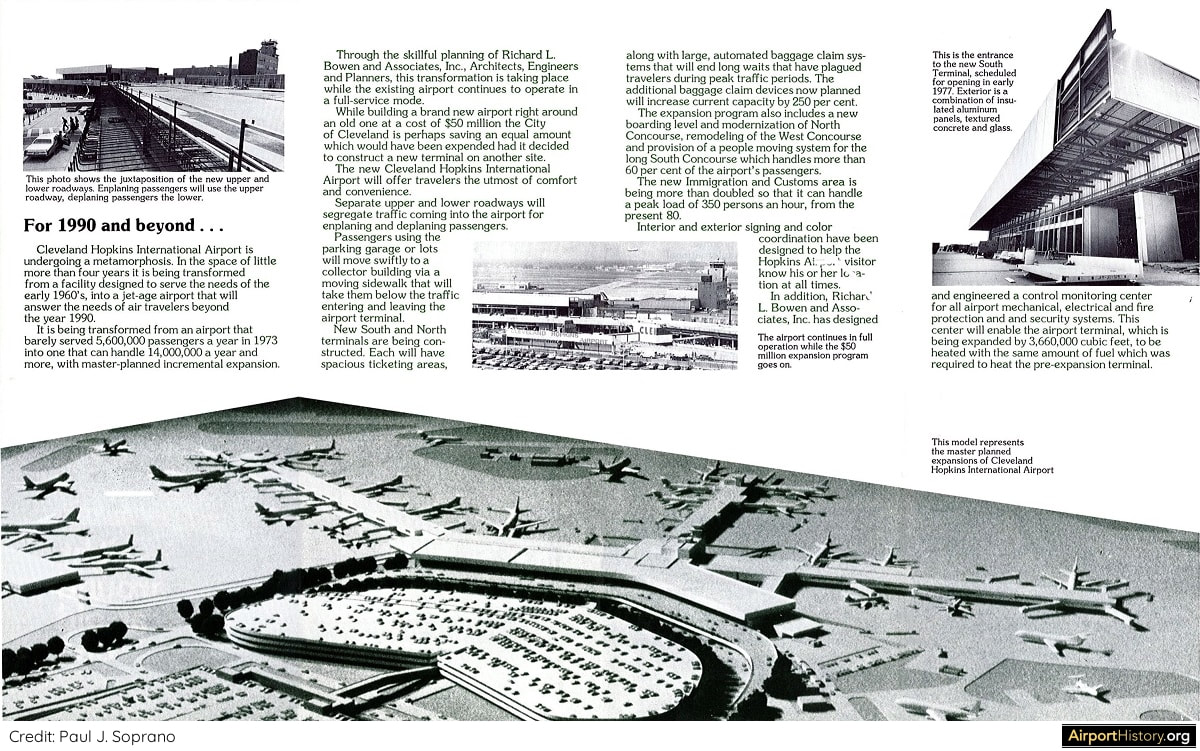 ​In 1987, Continental Airlines established a hub-and-spoke operation at Cleveland Hopkins and in 1999, a new Concourse D was opened for the exclusive use of Continental Express flights. In 2000, at the height of the Continental Hub and just before the 9/11 attacks, the airport handled 13.29 million passengers, a number the airport has never reached since. ​

​Despite this, significant modernization of the airfield was also undertaken and completed in 2008, which greatly improved safety and capacity, albeit at a time of decreasing flight operations.

In 2014, four years after the merger of United and Continental, United dismantled the hub, leading to a further decline in traffic and the mothballing of satellite Concourse D. Since then, traffic has recovered somewhat, and in 2019, the airport broke the 10 million barrier for the first time in ten years.

In 2019, the airport commissioned the preparation of a new master plan, which will be finished in 2021. One of the master plan options is to replace the terminal, whose oldest parts date back to the mid-1950s, with a brand-new USD 1 billion state-of-the-art terminal. However, with the havoc COVID-19 inflicted on the aviation industry in 2020, plans will likely be scaled back. 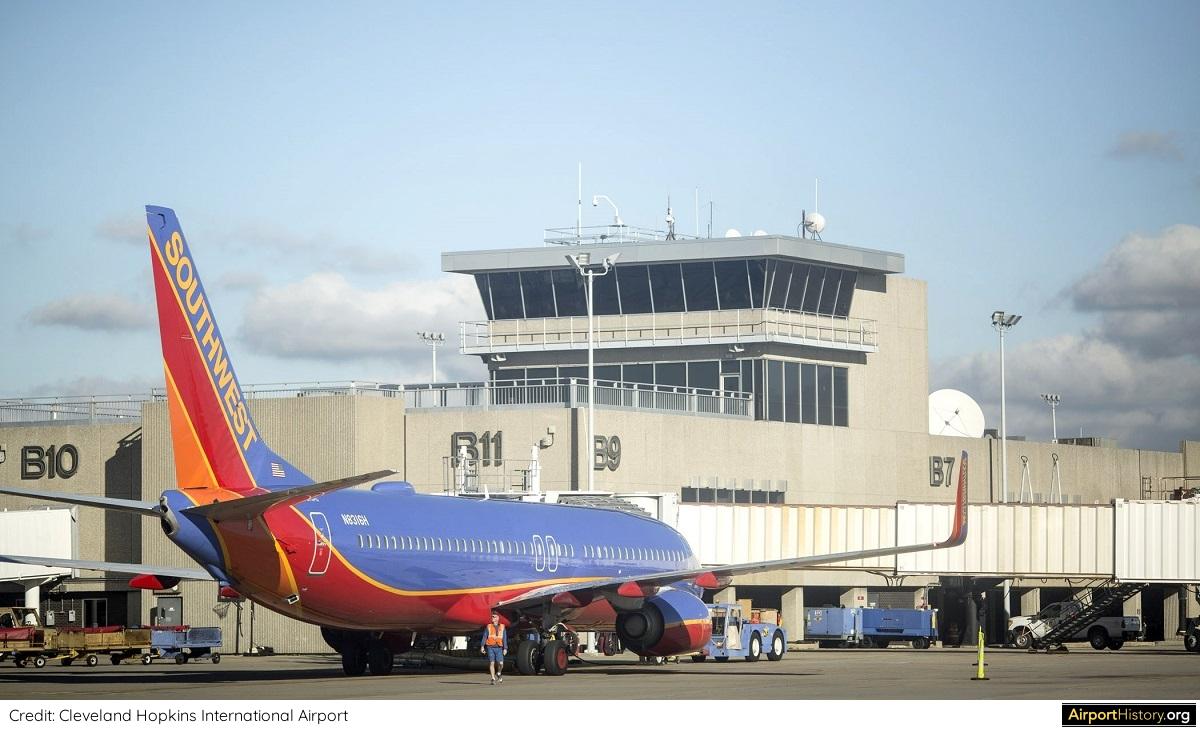 An exterior view of Concourse B. Despite the dismantling of its hub, United is still the airport's largest airline, with Southwest being the second largest. Note the airport operations tower above the former indoor/outdoor spectator deck at the end of Concourse B, which was closed after 9/11/01 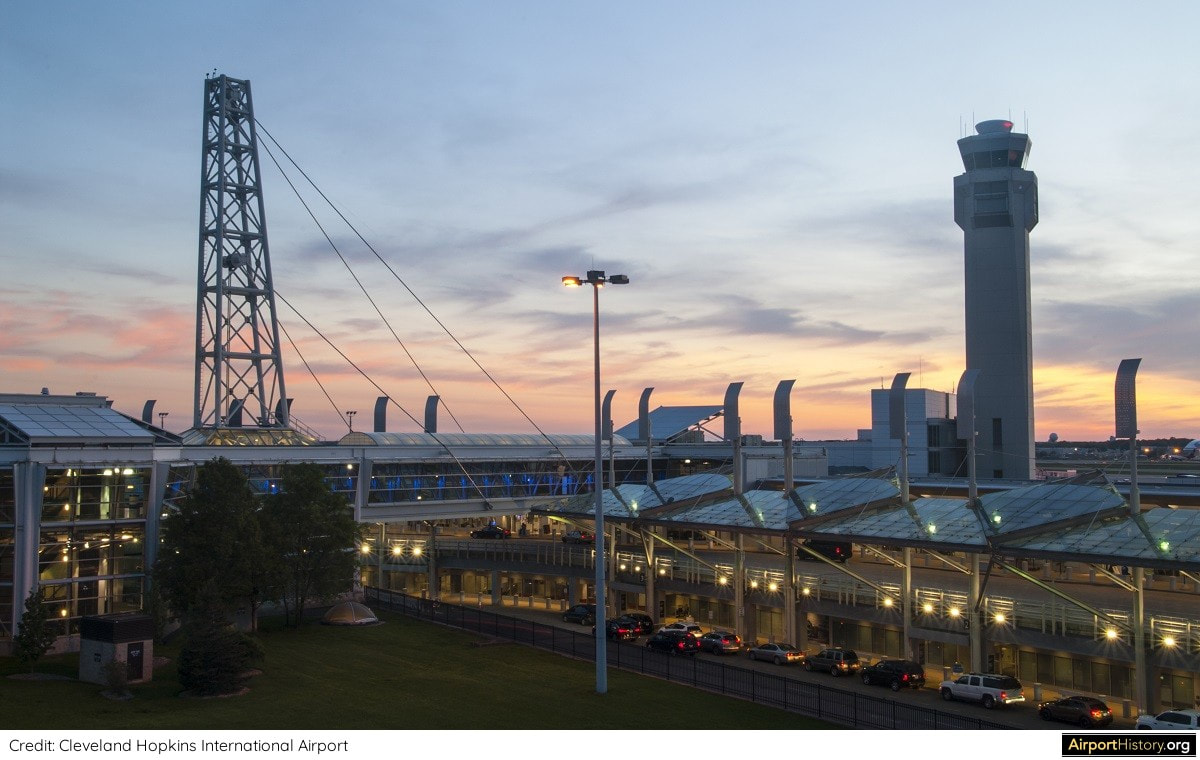 We hope you enjoyed our retrospective on the historic importance of Cleveland International Airport! The above article is a modified version of an article originally written by Paul Soprano, which you can find here.

I want to thank Todd Payne of Cleveland Hopkins Airport for his kind assistance with providing imagery.