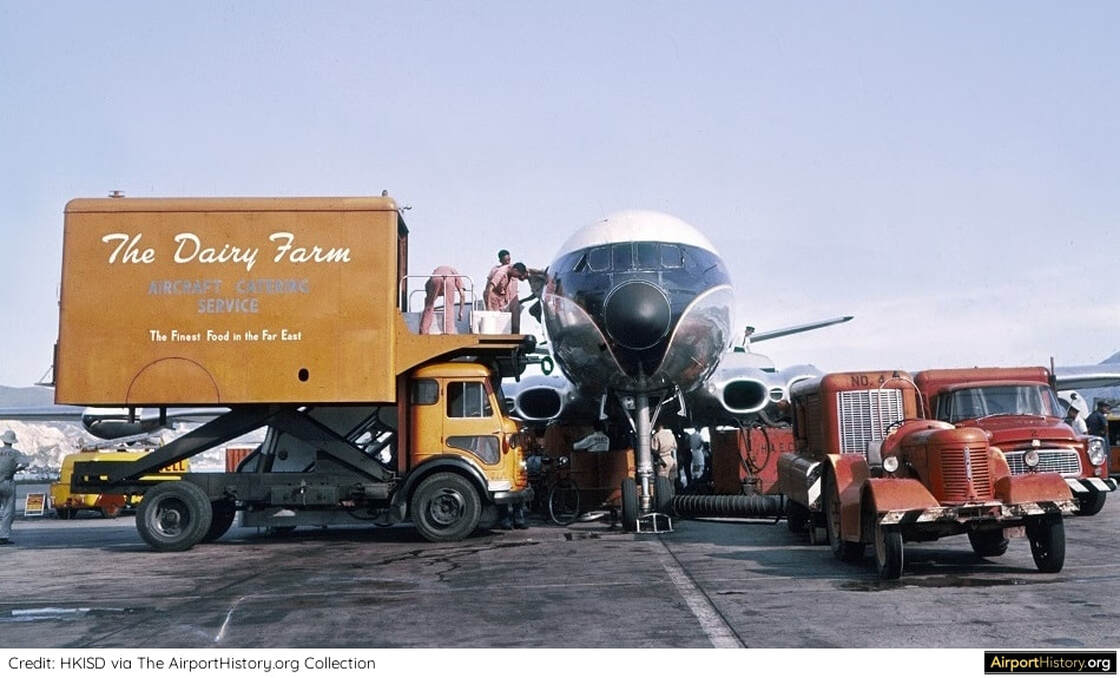 Kai Tak Airport served as Hong Kong's international airport from 1925 until 1998. The airport was known for its spectacular location with the skyscrapers and mountains of Kowloon located to the north and its only runway jutting out into Victoria Harbour. Landing at the airport from the north was a breathtaking experience, and one which required special training for pilots.

In the near future we will be posting a full history on this legendary airport, featuring many never-seen-before images and fascinating background information.

For a taste of what's to come, AirportHistory.org takes you back on a trip back to the early years of the Jet Age to see what life was like at the legendary Kai Tak Airport. Enjoy! 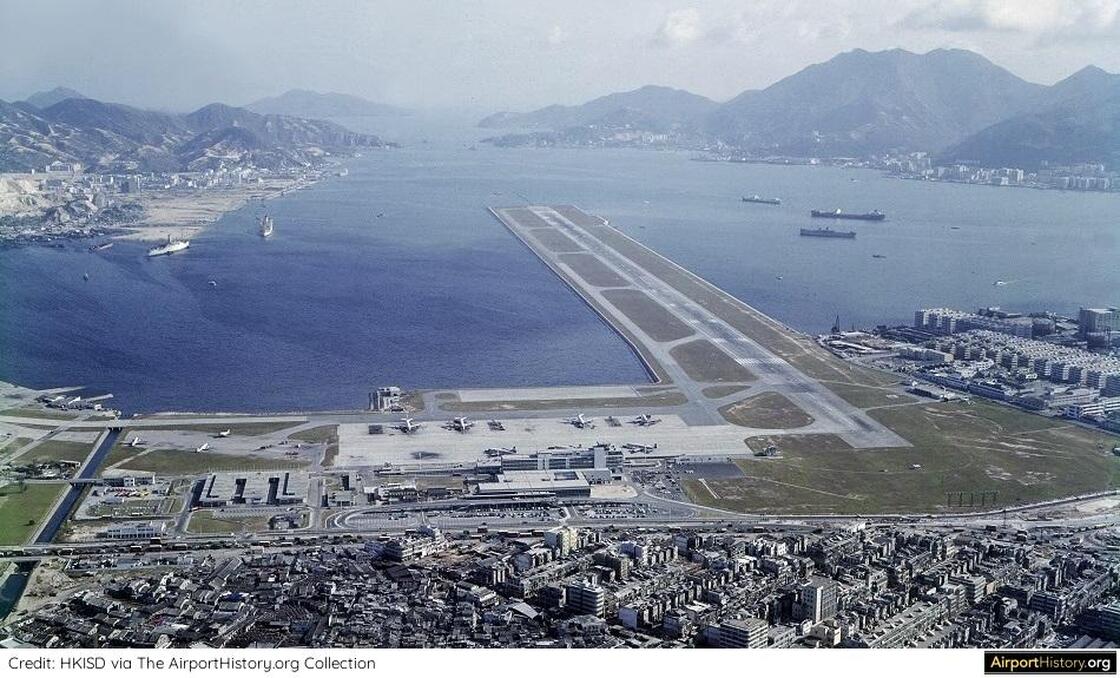 An early-1960s aerial view of Kai Tak Airport taken from the north-west view. In 1958, a new 8,350-foot-long (2,542 meter) runway extending into Kowloon Bay was completed by land reclamation. 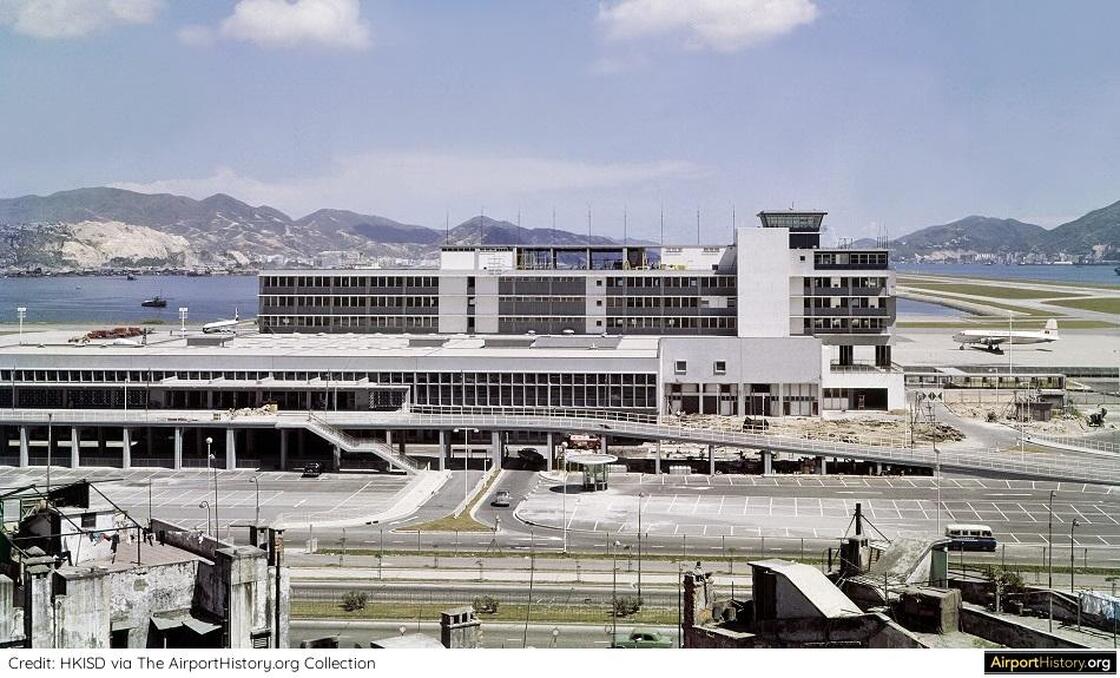 ​A 1962 aerial view showing the newly built passenger terminal. It was a state-of-art facility for its time with departing and arriving passengers being split between two levels. An elevated roadway brought passengers to the departure level. Total construction cost at the time was one million British pounds. 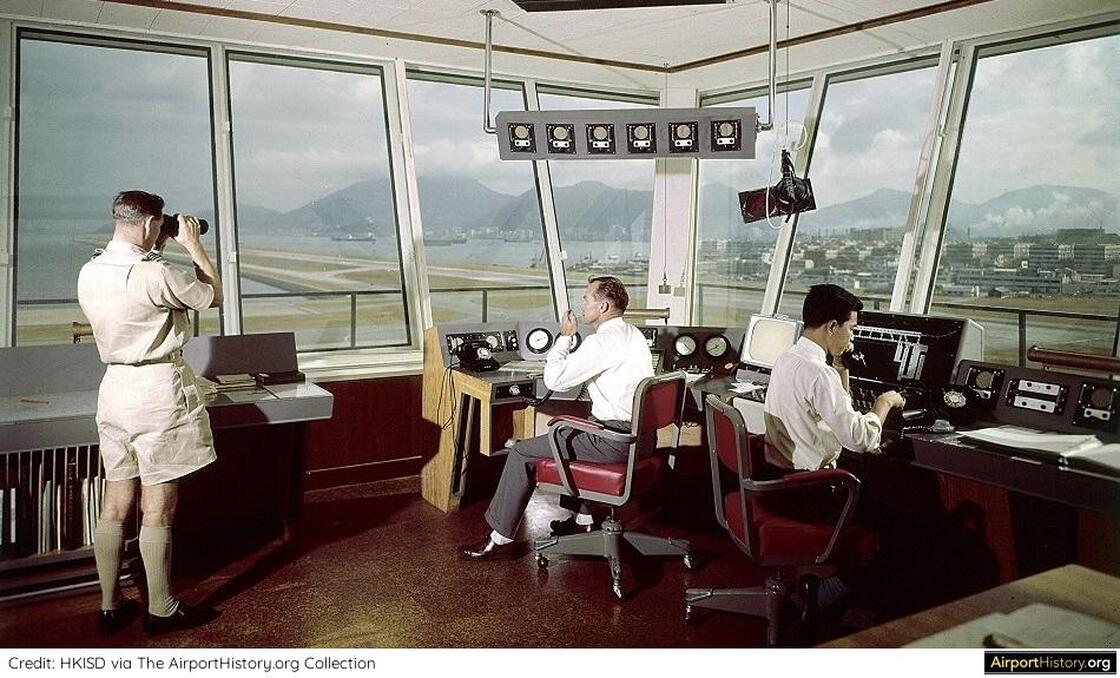 A view from the inside of the air traffic control tower. 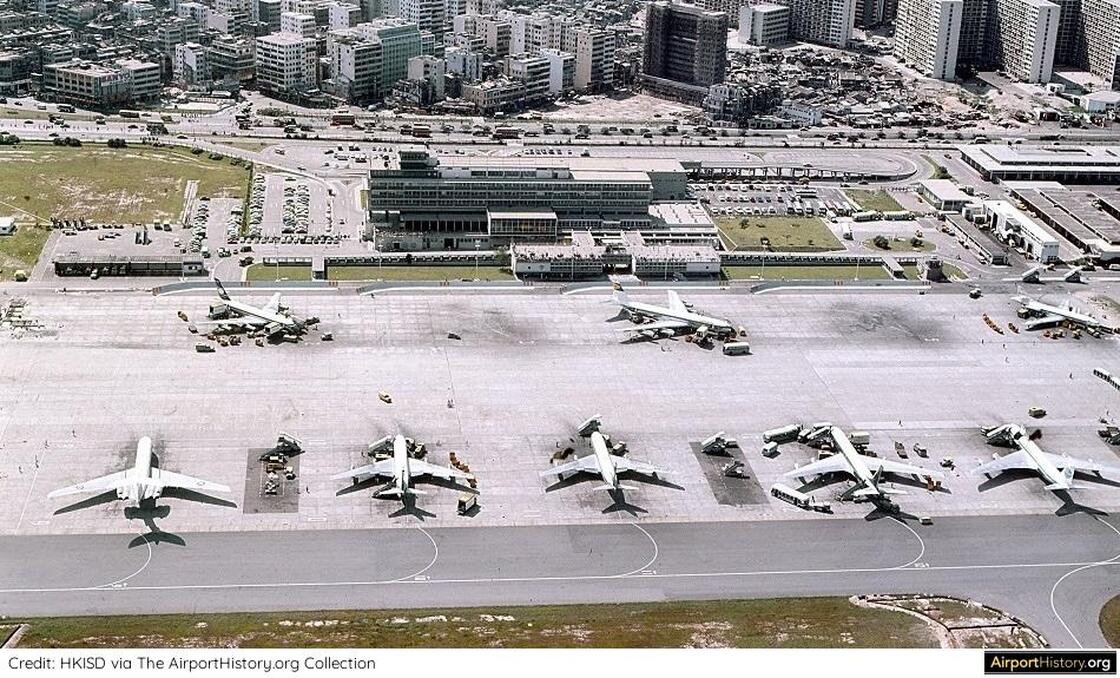 ​An aerial view of the platform. There was room for 10 aircraft on the expanded platform. Due to very strong growth of air traffic in the early 1960s, room ran out during peak times. Sometimes 17 aircraft were crowded onto the apron.
A great video about the opening of the new Kai Tak Airport terminal in 1964. 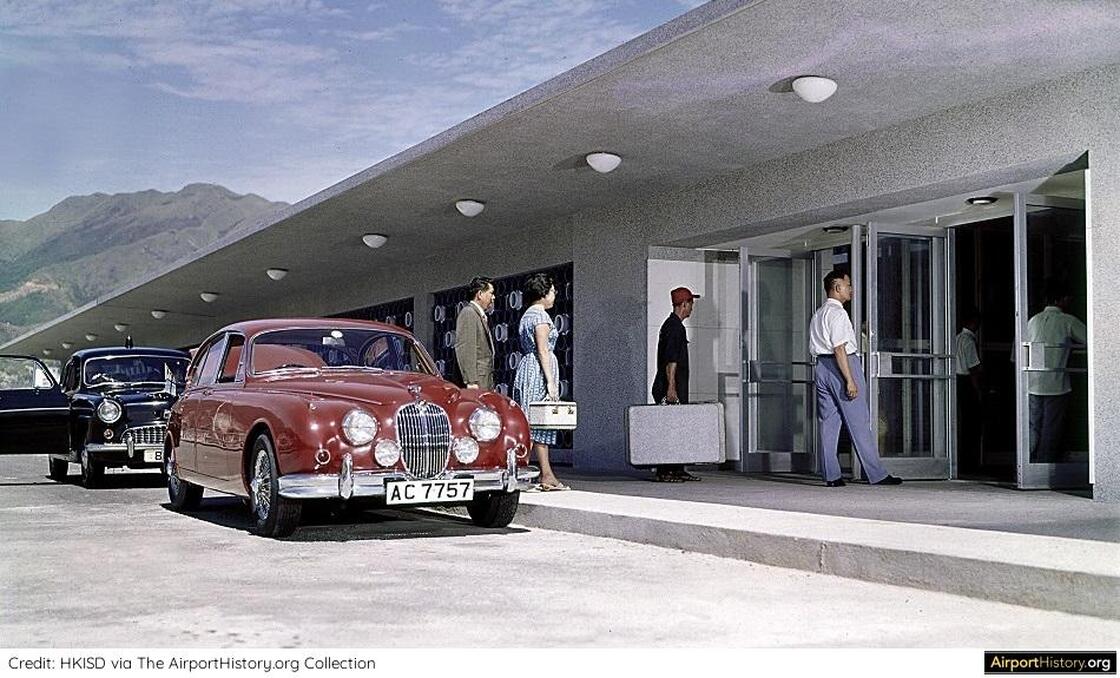 A view of the departure curb. Look at those shiny cars! 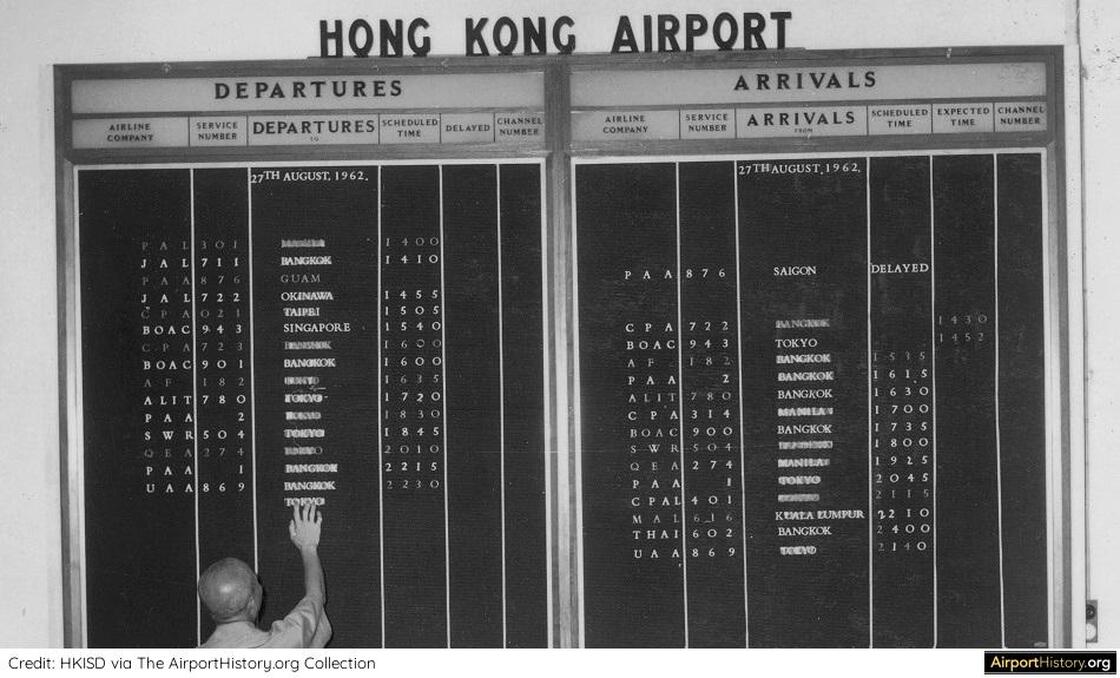 ​An old style departures and arrivals board! The day is August 27th, 1962. Many of the mentioned airlines are still around, except Pan American. BOAC was later merged into British Airways. There are lots of options if you want to go to Bangkok! 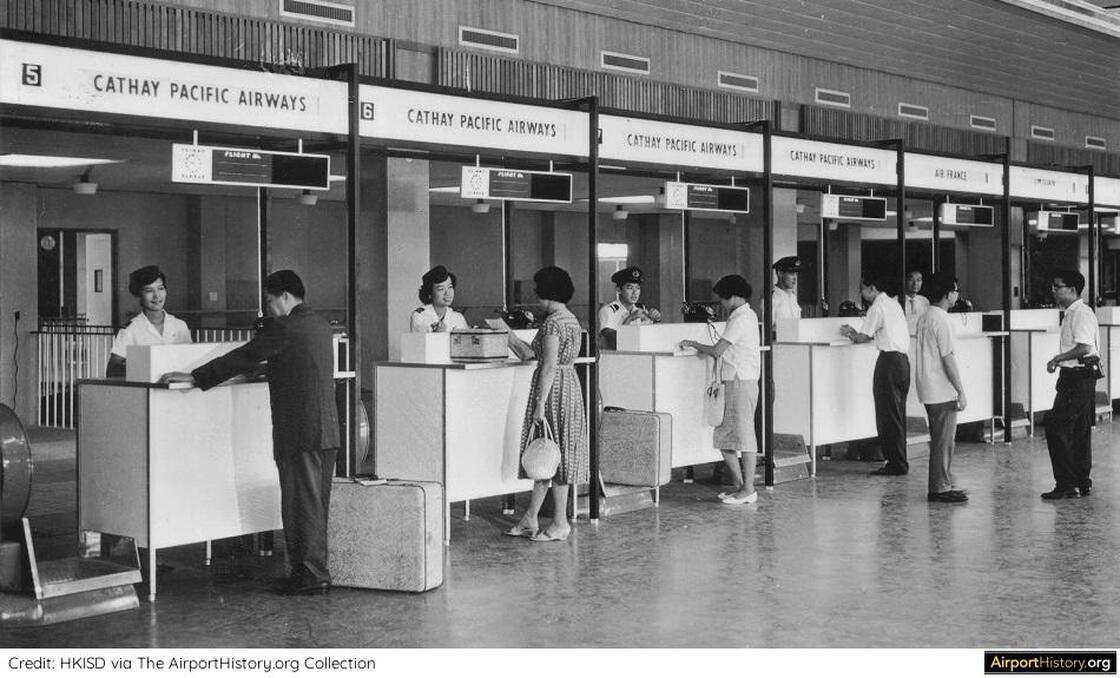 ​The check-in area for Cathay Pacific, which has been Hong Kong's home carrier since 1946. 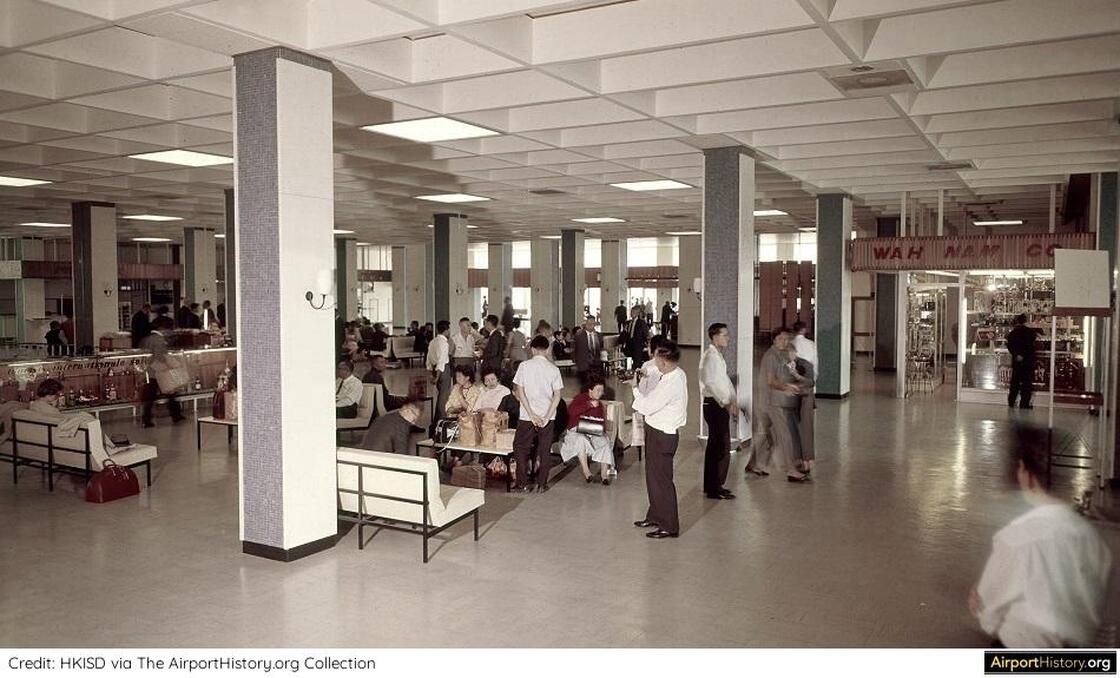 ​A view of the departure lounge. 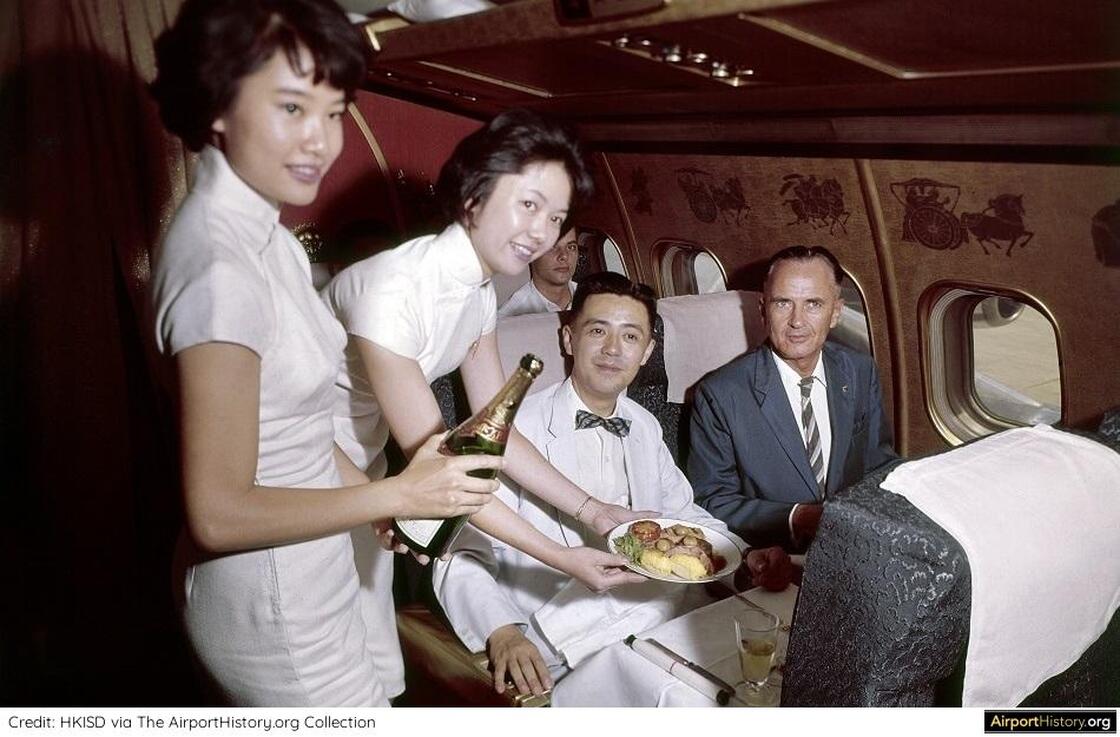 A rare non-airport photo but I really like this one. Two gentlemen enjoying the early Jet Age in Asia. What a combination! The scene seems a bit staged, as meals are normally not served on the ground. 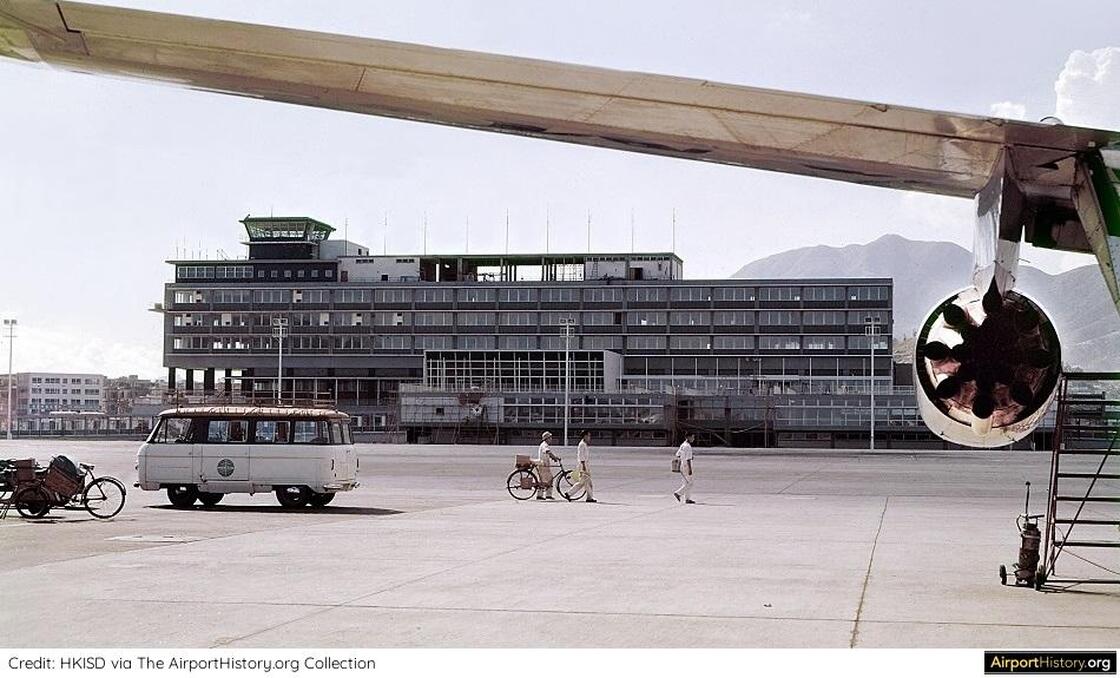 An airside view of the new terminal. The logo on the van suggests we're probably looking into the engine of a Boeing 707 belonging to Pan American.

A day of leisure at Kai Tak 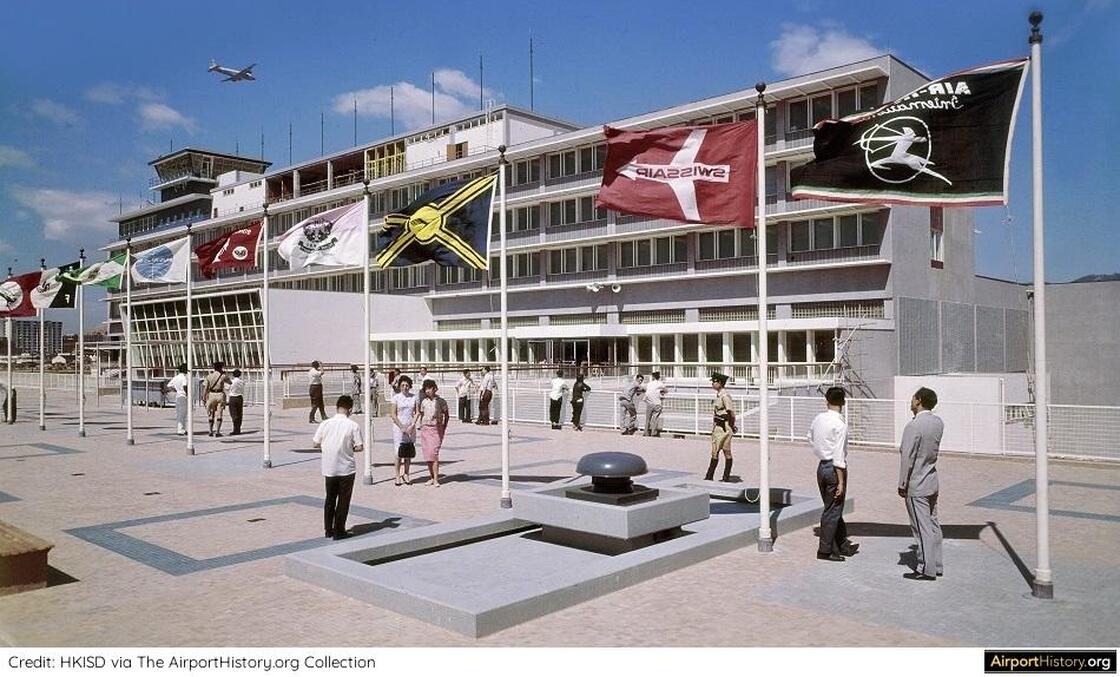 ​A view of the airport observation deck. For the younger readers: observation decks like these were commonplace at airports around the world in the 1960s. Due to safety concerns and airport expansion projects, they have slowly disappeared. Credit: HKISD 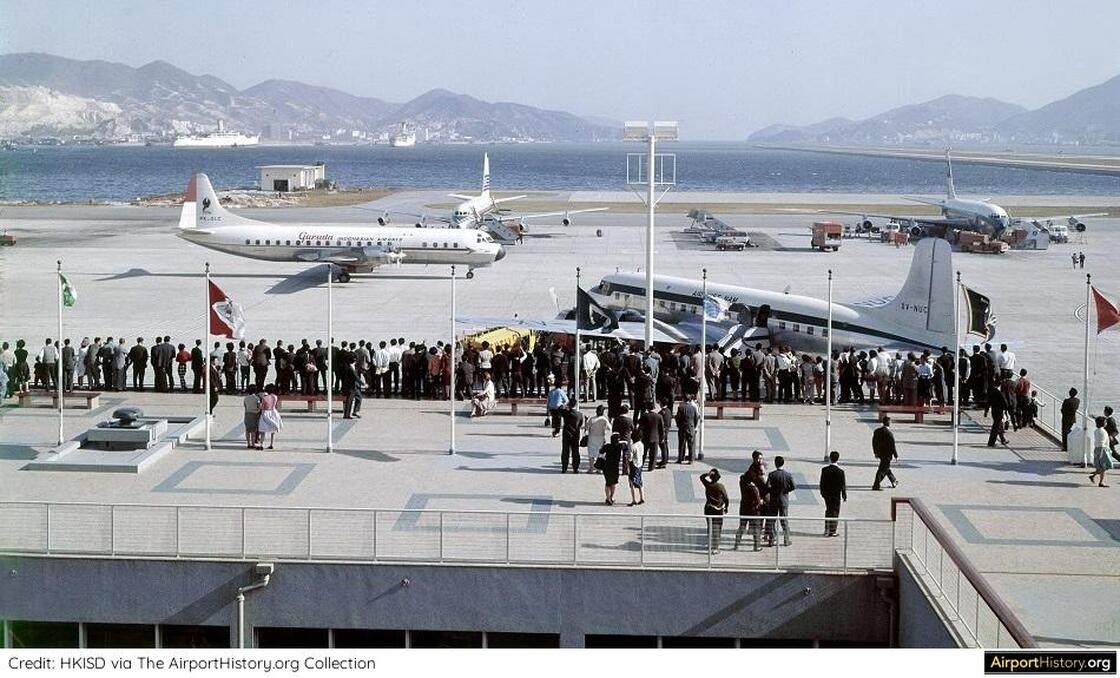 ​Another view of the observation deck. Parked on the ramp are an Air Vietnam Douglas DC-6, a Garuda Indonesia Lockheed Electra L-188, a Japan Airlines DC-8 and a Lufthansa Boeing 707.

​Another view from the observation deck. Northwest Airlines, which had an extensive transpacific network, served Hong Kong from its Pacific hub at Tokyo Haneda Airport, later Narita. Credit: HKISD 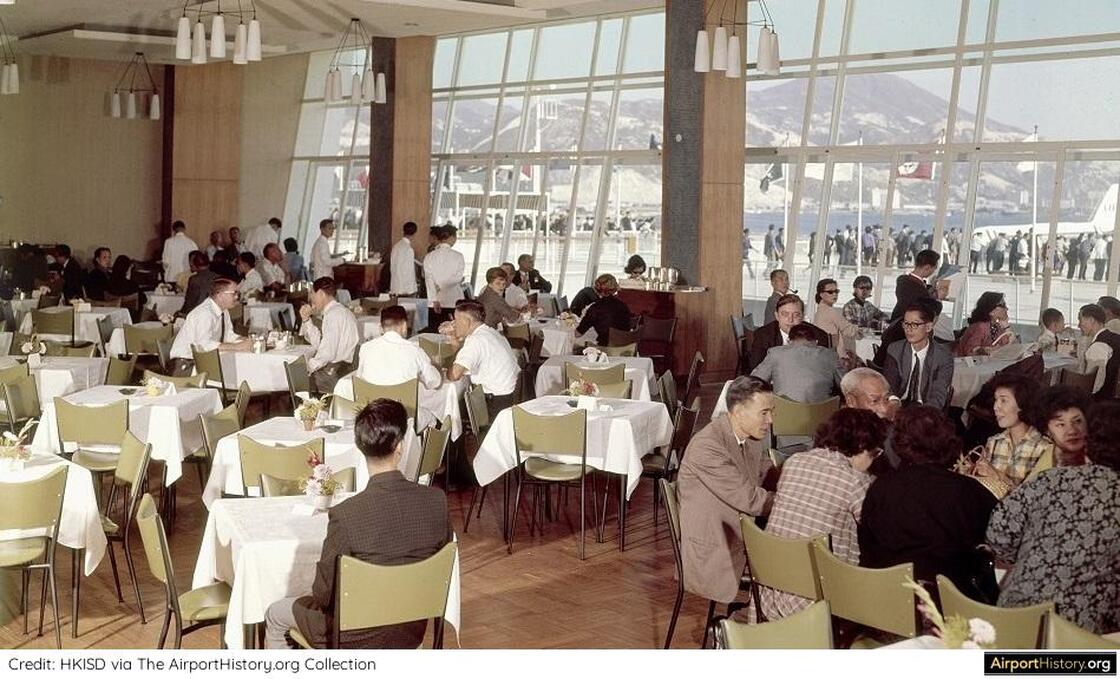 ​Airport visitors in the airport restaurant behind the observation deck. 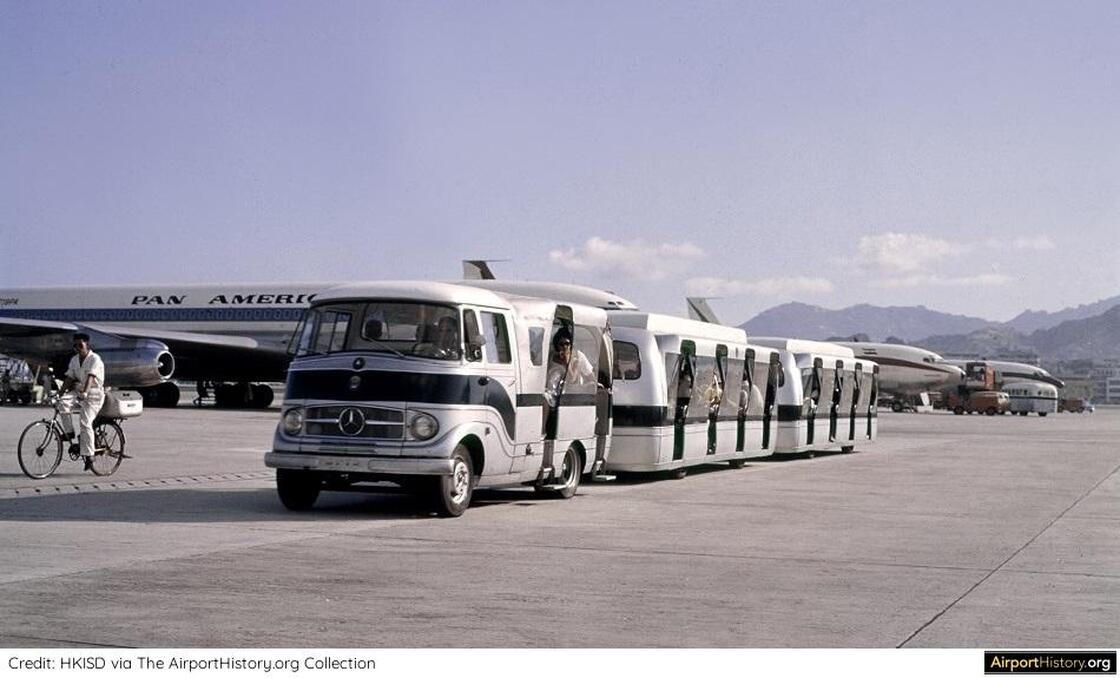 ​Visitors were able to take an airport tour in this Mercedes-Benz vehicle. Nice!

​End of the tour

That concludes our little tour of Kai Tak Airport in the 1960s. A full history on the airport, featuring many more never-seen-before images and fascinating facts, will be posted at a later date.