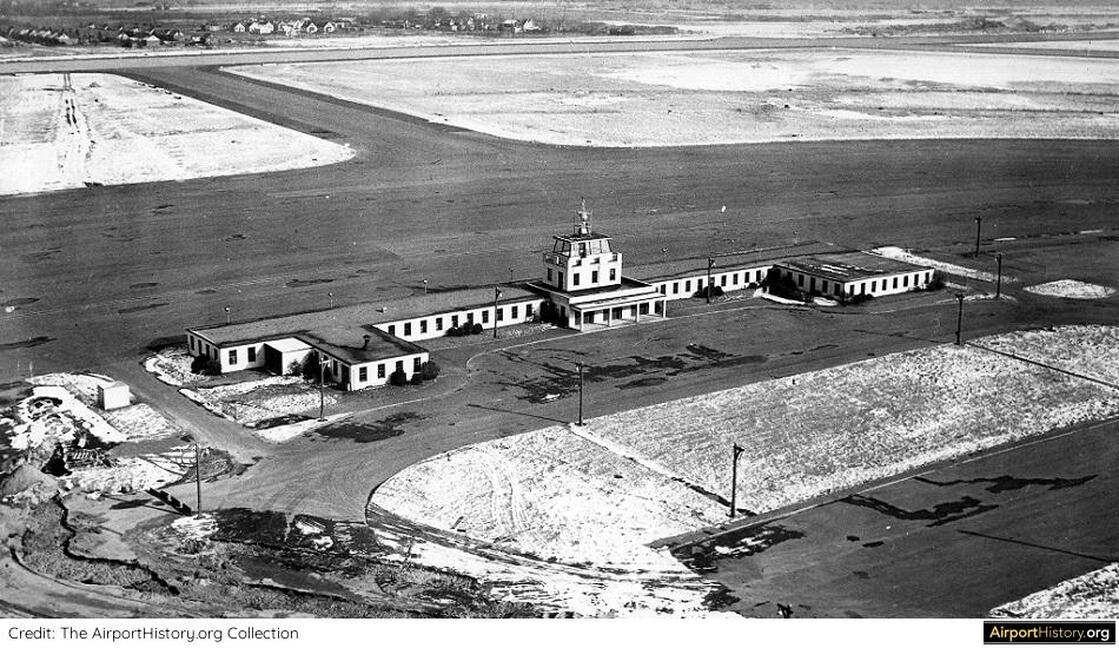 An aerial view of Idlewild airport's completed temporary terminal building in late 1947, more than half a year before opening.
Published: February 28, 2019

New York John F. Kennedy Airport, known by many around the world simply as "JFK", was the world's first large-scale international airport.

The airport is especially unique due to the unprecedented airline involvement in the design and construction of its terminals. Every airline, both US and foreign, was given the opportunity of commissioning its own terminal or self-contained departure station.

When "Terminal City" was completed in the 1960s, it was considered state-of-the-art and a true expression of the country's individualism and can-do attitude. Some of its terminals were true architectural masterpieces.

However, generally the terminals did not adjust well to ever-growing traffic flows and changing requirements (i.e. larger aircraft, hub-and-spoke operations, increased security, commercial requirements). Accordingly, in the late 1990s, a major rebuild of JFK commenced that is still ongoing and will last well into the 2020s.

​Opened as New York International Airport in 1948, it was commonly known as "Idlewild Airport" before being renamed in 1963 as a tribute to John F. Kennedy, the 35th President of the United States, following his assassination.
​
In the first of a multi-part article on the history of Kennedy Airport, we take you back in time and look at the early years of its development.

​However, the lack of a proper highway connecting the airport to Manhattan meant that it was very inconveniently located. Soon after opening, the city's leaders realized that Floydd Bennett had been a mistake.

​​Instead, airlines chose to operate from Newark Airport in New Jersey, which was much more accessible due to a new highway connecting it to the city. Consequently, Newark Airport served as New York's de facto commercial airport throughout the 1930s.

An artist's rendering of the Delano & Aldrich design for Idlewild. In this design there were four sets of parallel runways in four different directions, ensuring that aircraft could always take off and land into the wind. Two of the runways had a length of 10,000 feet (3,048 meters). This was much longer than was required for aircraft of the time and was done to accommodate future aircraft, which were getting heavier with each generation.
IMAGE GALLERY: THE HARRISON & ABRAMOVITZ DESIGN FOR IDLEWILD 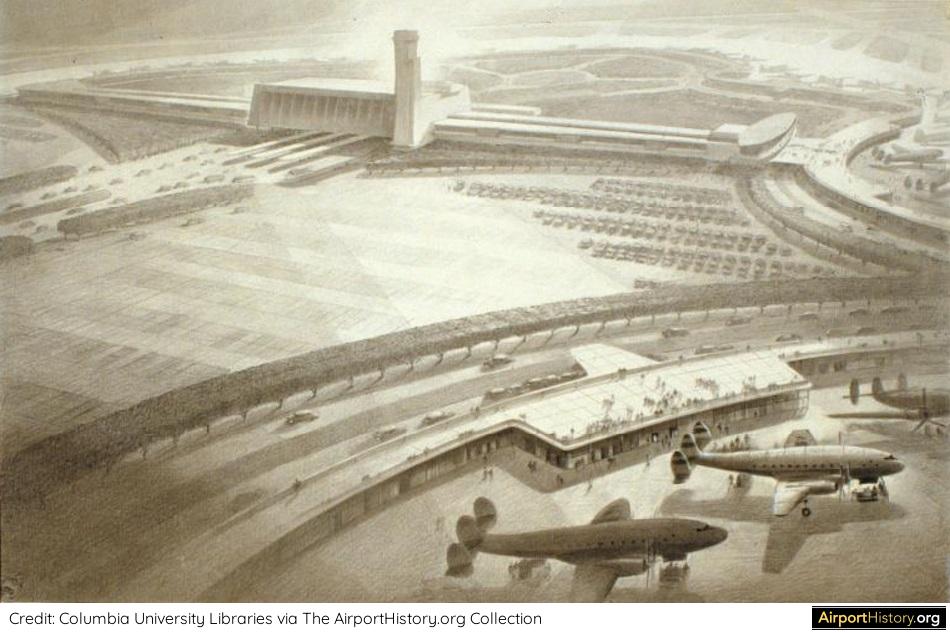 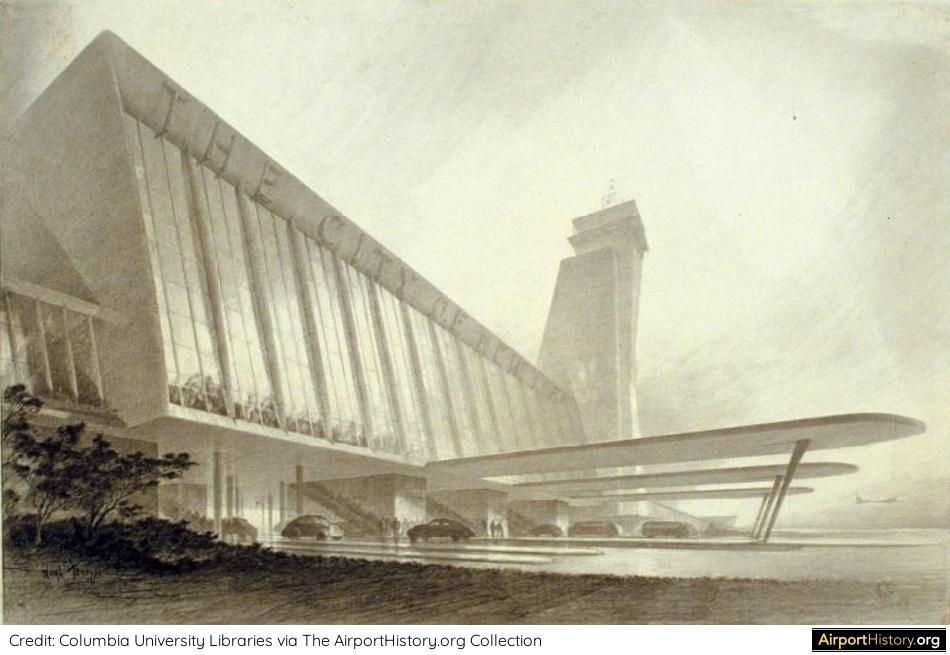 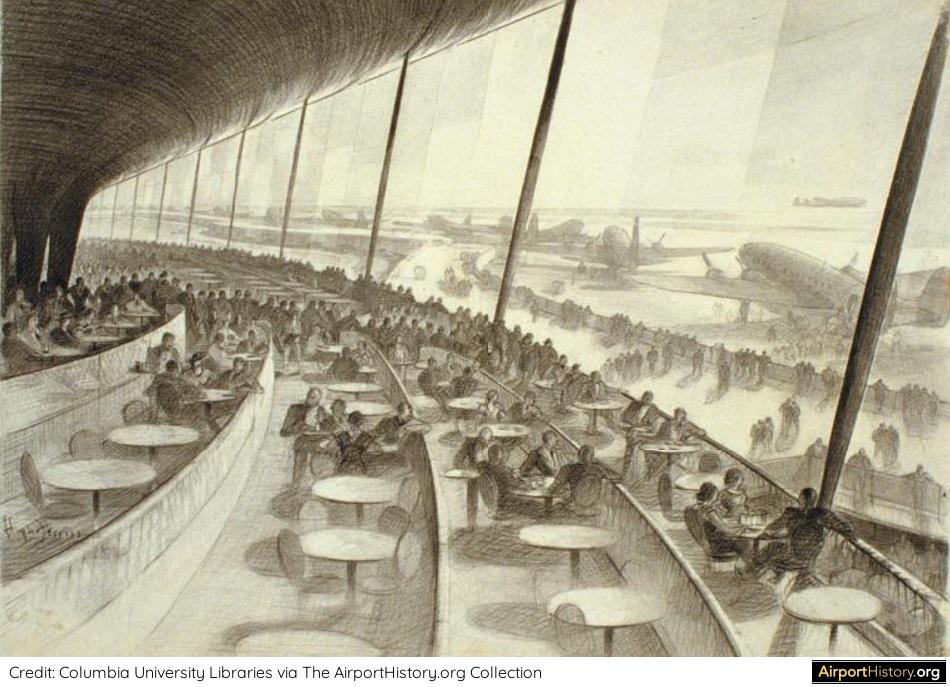 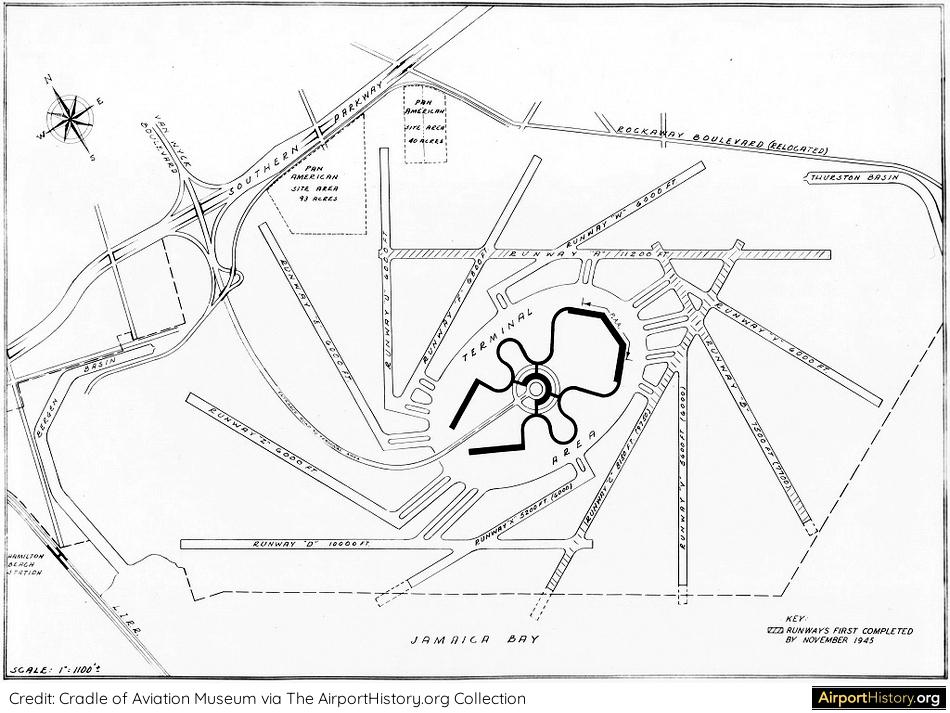 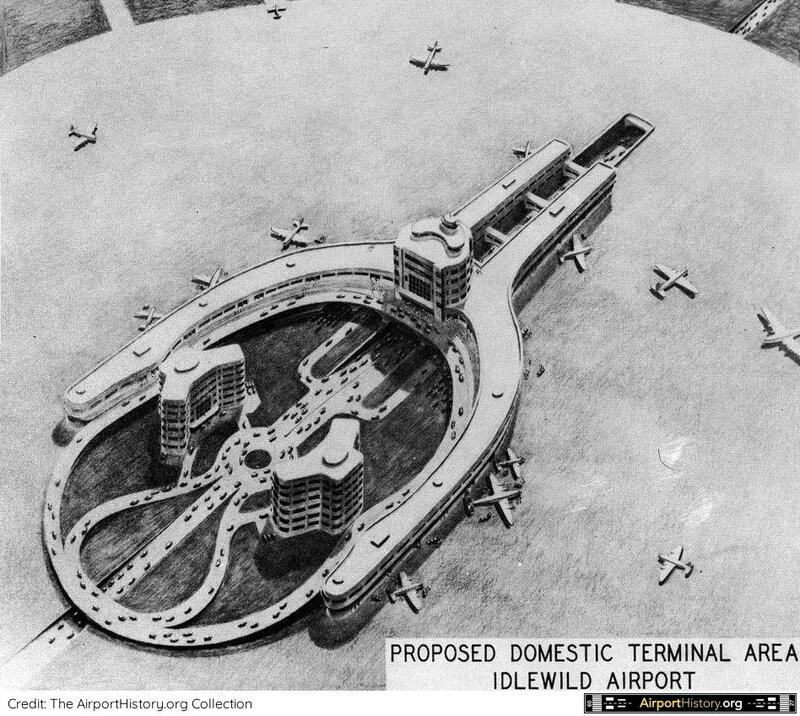 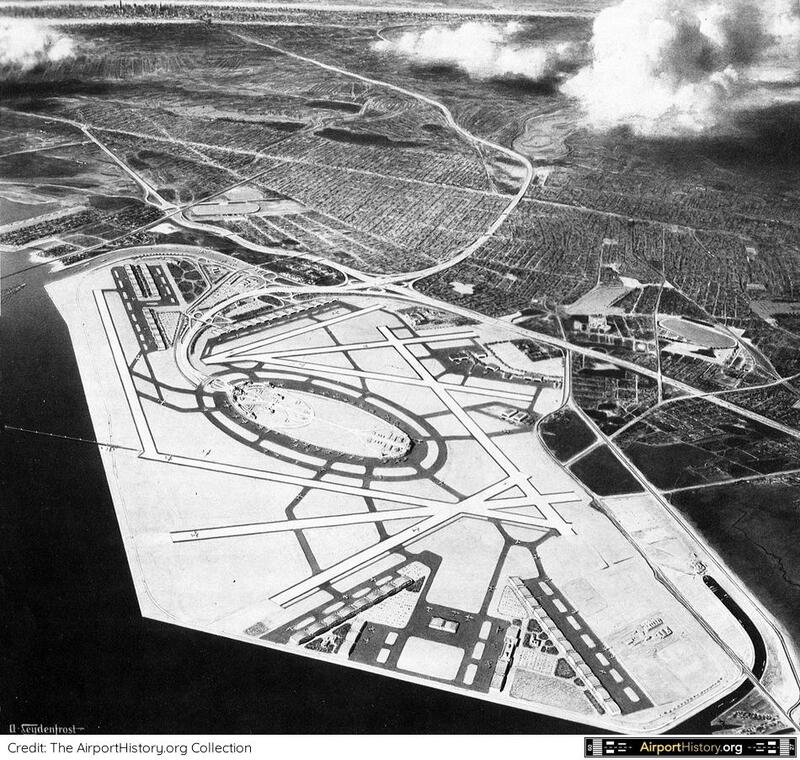 ​CONSTRUCTION DELAYS
​
Initially, the airport was expected to start operations soon after the war. By August 1945, 12 airlines had signed leases, expecting the airport to open for preliminary operation in September. However, due to financing issues, union disputes, arguments over rents charged to airlines and problems with the access roads, completion of Idlewild airport was delayed by almost three years, until the summer of 1948. 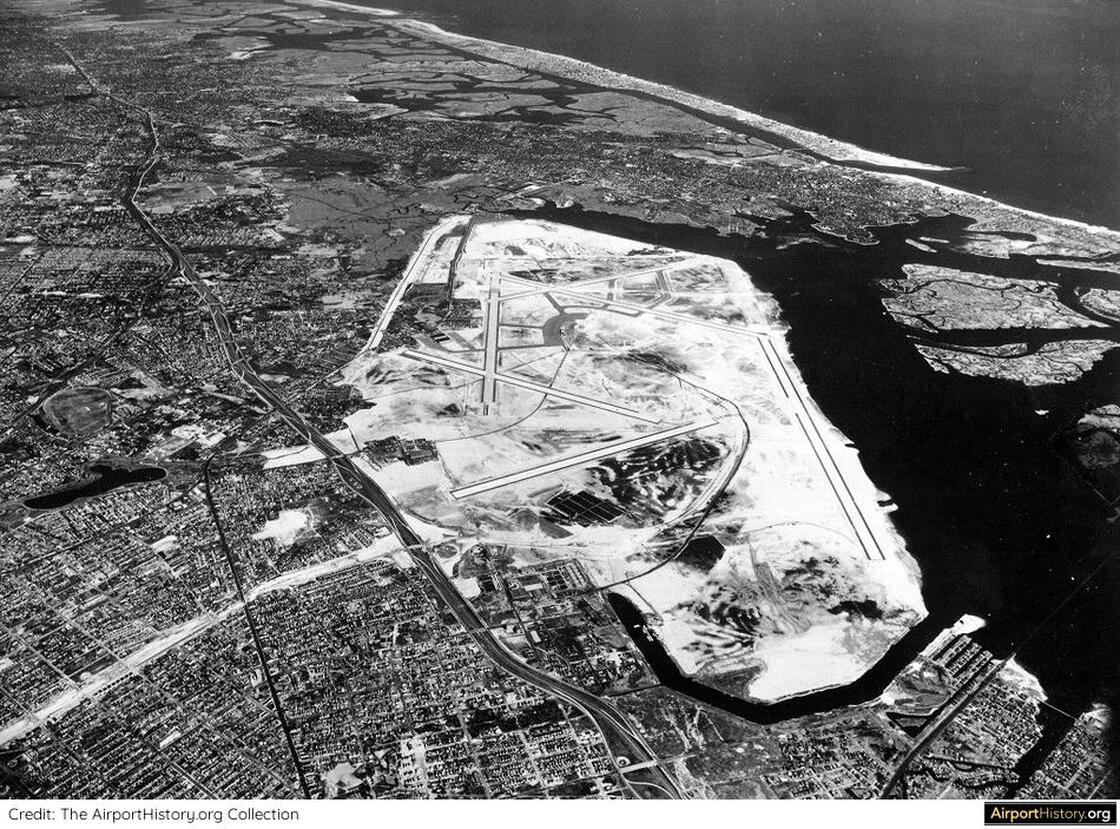 A 1948 aerial view of Idlewild airport, looking southeast, taken around the time of completion. The broad expanse the airport covered, as well as the fact that it was largely built on landfill, is evident in this photograph. Six runways are visible with a seventh under construction. Also note the construction of the Van Wyck Expressway (lower left) connecting the airport to Manhattan. The van Wyck opened in early 1950.
WHAT'S IN A NAME?
​
As the airport was nearing completion, in March 1948, the New York City Council decided to name the airport Major General Alex Anderson Airport, in honour of a New York World War II hero. However, Mayor La Guardia and his aides always referred to it as the "Municipal Airport at Idlewild", as opposed to the very similar "New York Municipal Airport" which later was renamed as New York LaGuardia Airport.

When the airport opened, it was officially named New York International Airport. To the press and public however, in the airport's first decades it was never called anything but Idlewild.

To be continued in Part 2!

This concludes our Part 1 of the history of John F. Kennedy Airport. Curious how things turned out? Click here for Part 2, where you can read all about the opening and early years of Idlewild's operation and growth.

Did you fly through Idlewild in the early years? Or do you have some other interesting information related to the airport's history or development? Share your memories in the comment section below!

​I want to say a special thanks to Joshua Stoff, curator of the wonderful Cradle of Aviation Museum in Garden City, New York. Josh and his team supplied many of the photos for the JFK articles. Thanks also to Edward Crellin and George Hamlin for the use of their images.