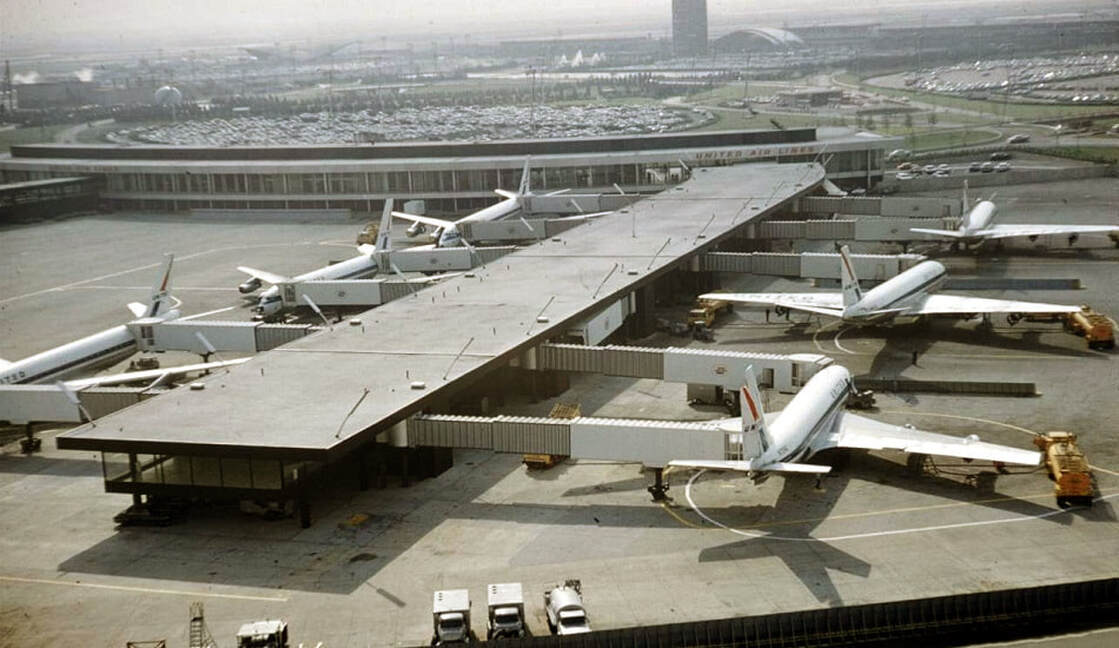 With the International Arrival Building (IAB) completed in December of 1957, the focus shifted to the construction of the individual airline terminals. In Part 4 of our history of New York John F. Kennedy Airport, we'll explore the the first three airline terminals that opened at Idlewild, those of United Air Lines, Eastern Air Lines and American Airlines. 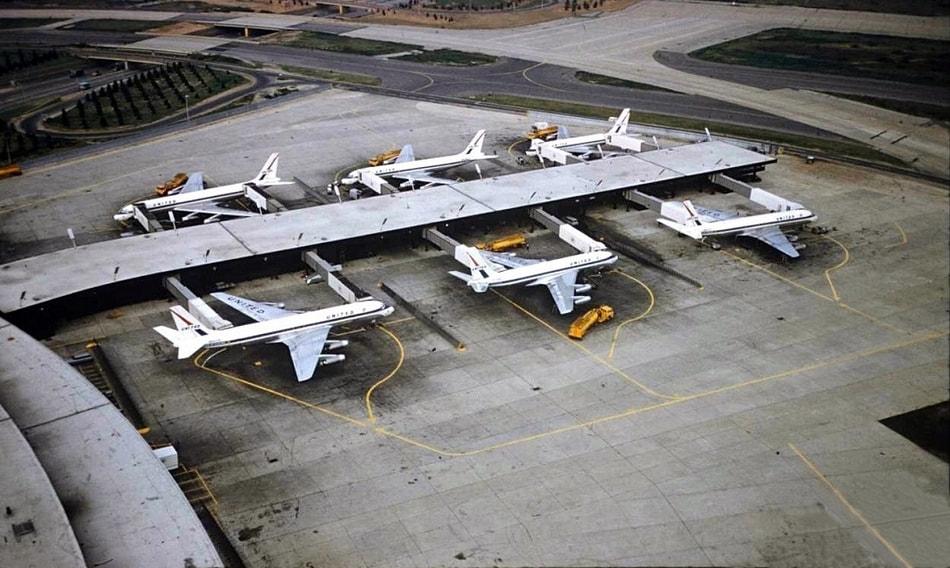 THE DEPARTURE PROCESS
​
​Pre-ticketed passengers would enter at the first level, then proceed through UAL's "express check-in" system. The system had positions somewhat like a supermarket where baggage was weighed, tagged and placed on a conveyor.

​Passengers with excess baggage continued beyond the first bank of check-in stations and paid at an 'excess counter'. Passengers then continued on via escalators, located at each end of the check-in hall, to the second level, then along the concourse to a 'hold room' at the gate, where tickets were checked.

An agent at the door directed people to the right or left side of the room, depending on whether they were first-class or economy passengers. When the flight was called they boarded through one of two boarding bridges, first class using the front, economy class by the rear.

United had hoped to have the terminal ready  for its launch of jet services on 18 September 1959, but the opening slipped back to 15 October 1959 and even then the building was not complete. Delta's section was not fully finished until 1961. Late or not, the United terminal has the distinction of being the first terminal to open that was designed for the Jet Age.
GALLERY: UNITED TERMINAL - INTERIOR VIEWS

Eastern Air Lines commissioned architect Chester Lindsey Churchill to design the terminal. Churchill designed a building that had a rectangular landside block, a fan-shaped main section and two gate concourses. The terminal was characterized by the use of glass curtain walls, a ribbed roof and the use of lots of marble and granite, which evoked the feel of a railway station for aircraft.

Arrivals and departures were placed on separate levels, each served by a three lane roadway. Above the roadways was a third level of offices. With 361,280 square feet (33,564 square meters), the Eastern Air Lines Terminal would be the largest passenger terminal for use by a single carrier anywhere.

An artist's impression of Eastern's future terminal. The design featured a glass curtain wall on the landside. Credit: The AirportHistory.org Collection
After Eastern discovered that competitors using jet aircraft had a big marketing advantage, it hastily ordered 15 Boeing 720s, which now could only be boarded by stairs. Later that decade, a plan was prepared to replace the concourses with a T-shaped concourse equipped with boarding bridges but this plan never materialized. Bridges started being installed on the existing concourses from late 1967.
​GALLERY: EASTERN AIR LINES TERMINAL - EXTERIOR AND INTERIOR VIEWS

​The central section of the terminal included a huge picture window overlooking the ramp. The landside featured a 317 by 23-foot (97 by 7-meter) stained glass facade, which was the world's largest stained-glass installation in the world for almost 20 years.​

The two concourses provided six gates each: four gates for jets, served by boarding bridges, and two for propeller aircraft, which would board by stairs. The concourses could be extended to provide four more gates each, raising the total number of gates to 20.
LAYOUT
​
The ground floor of the terminal accommodated the baggage reclaim and arrivals hall, baggage room, a barber shop, operations space, a staff cafeteria and a flight kitchen for American's catering subsidiary Sky Chefs.

​The second level was dominated by the 300-foot (91-meter), double-height lobby with its picture window overlooking the ramp. The check-in desks were arranged in front of the window. ​
GALLERY: AMERICAN AIRLINES TERMINAL - EXTERIOR AND INTERIOR VIEWS 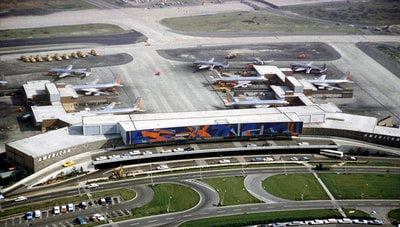 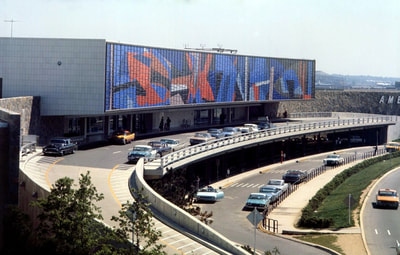 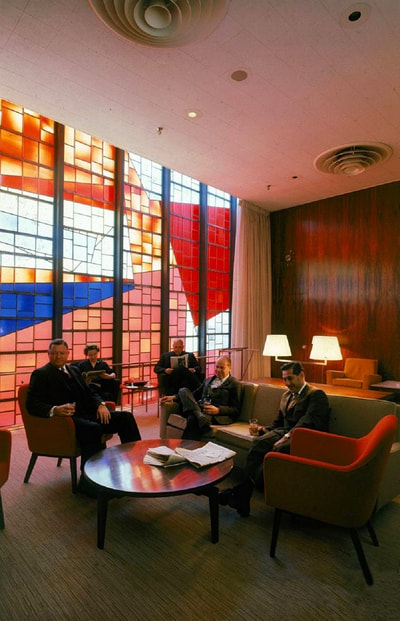 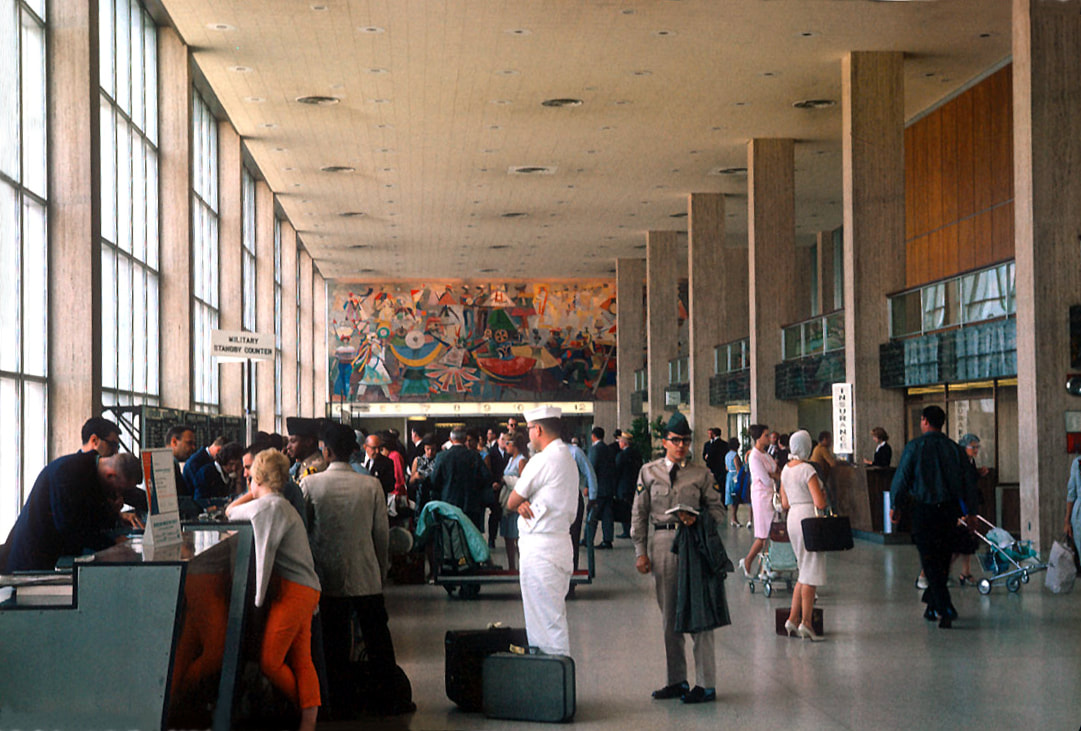 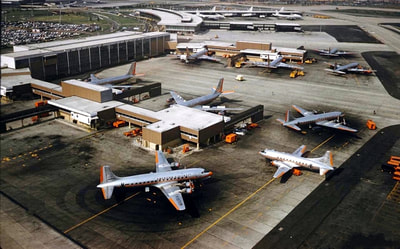 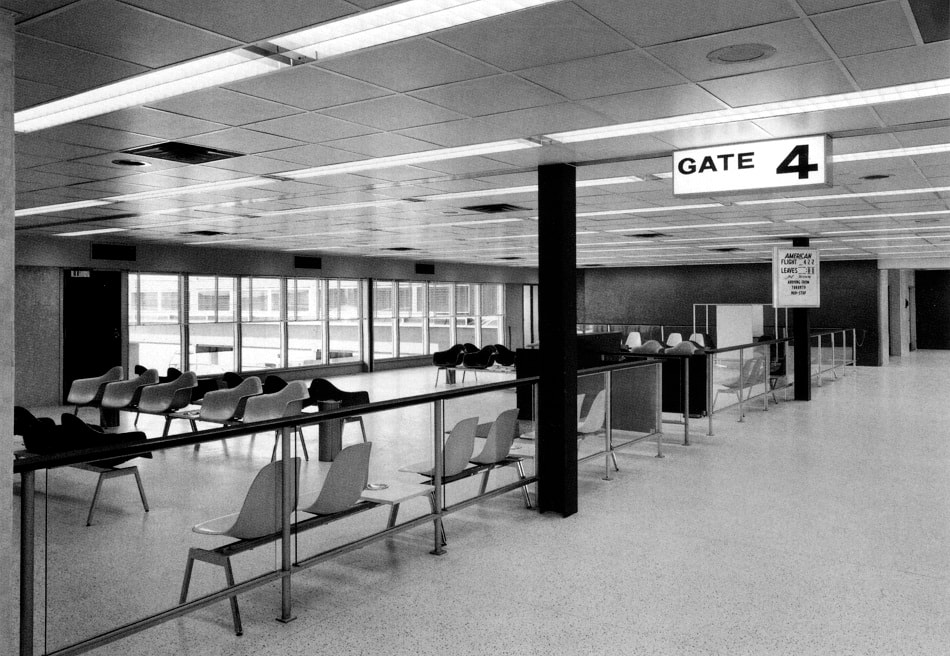 To be continued in Part 5!

This concludes the fourth installment of our history on Kennedy Airport! Click here to read Part 5,where we will explore the legendary Pan Am Terminal and the TWA Flight Center!

Did you miss Part 4? You can read it here.

Do you remember visiting the terminals of United, Eastern or American in the early years? Tell us about it below!

I want to give a special thanks to David Kaufman and Shea Oakley, commercial aviation historian. These two JFK Airport knowledge powerhouses provided great insights and feedback on this article. Thanks, Gents!