The 1960s were a golden decade for Pan Am, which is symbolized by this 1961 image of the Pan Am terminal being lit up by the early morning sun. Credit: Getty Images/Life/Dmitri Kessel
Published: December 26, 2019
Updated: February 8, 2020

Welcome to Part 5 on our history of New York's Kennedy Airport. In this chapter, we will explore the design of two of the most iconic airport passenger terminals of the 20th century:  The Pan Am terminal and the TWA Flight Center!

An early design model of the Pan Am terminal.
A DESIGN CHALLENGE

​Pan American World Airways, as the premier US international carrier, and TWA, as the number two, were allocated the sites immediately adjacent to the International Arrivals Bulding (IAB) in order to minimize the distance their aircraft needed to be moved between international arrivals and their departure terminals.

​Architects Walther Prokosch of Tippets-Abbett-McCarthy-Stratton, and Emanuel Turano of Ives, Turano & Gardner Associated Architects, set out to design a signature building befitting America's de facto flag carrier.
Pan Am's site was only 17 acres (6.9 hectares). To add to the challenge, the site had a particularly short landside frontage due to the strong curvature of Terminal City in that location. ​
​
The team came up with one of the most striking designs of the time. This was a circular-roofed building, with the roof designed to overhang the aircraft parking apron by 114 feet (37.4 meters).

​The roof would thus provide a canopy under which airplanes could park, enabling passengers to remain dry in inclement weather. Only two airports had such canopies: Birmingham in the UK and Berlin/Tempelhof, both designed in the 1930s.. ​
​GALLERY: DESIGN, CONSTRUCTION AND AERIAL VIEWS 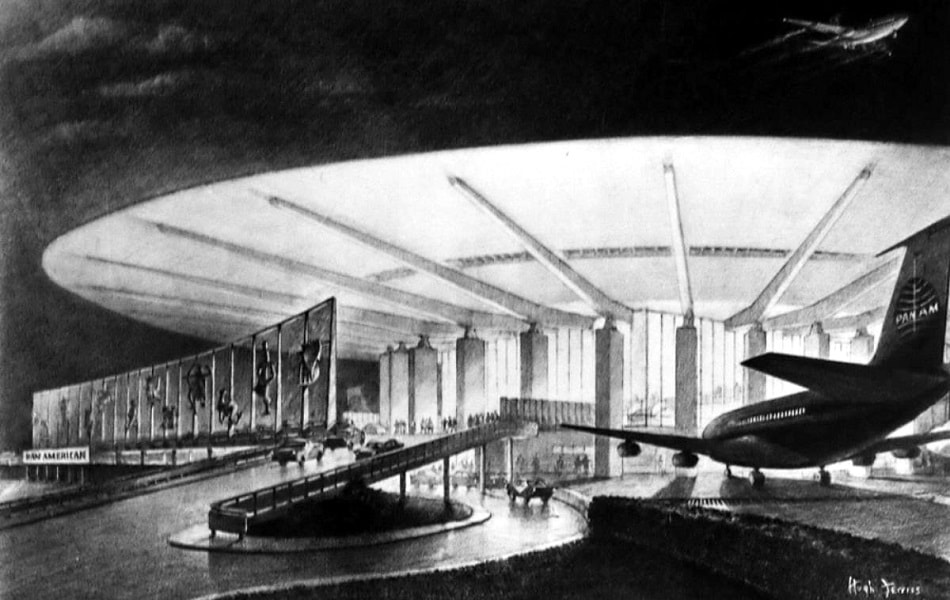 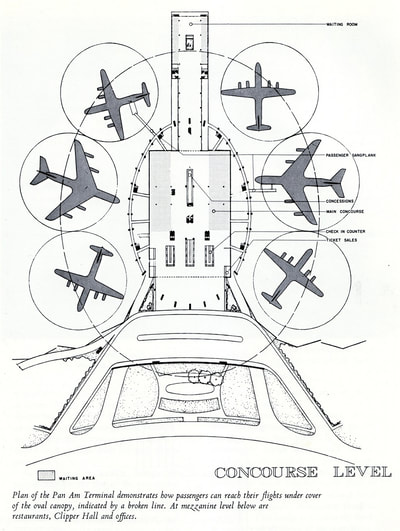 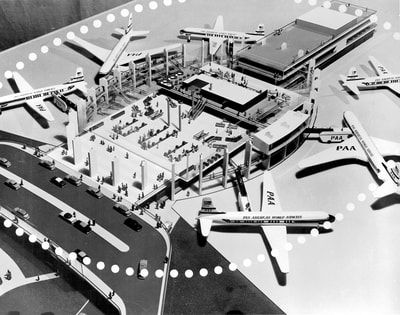 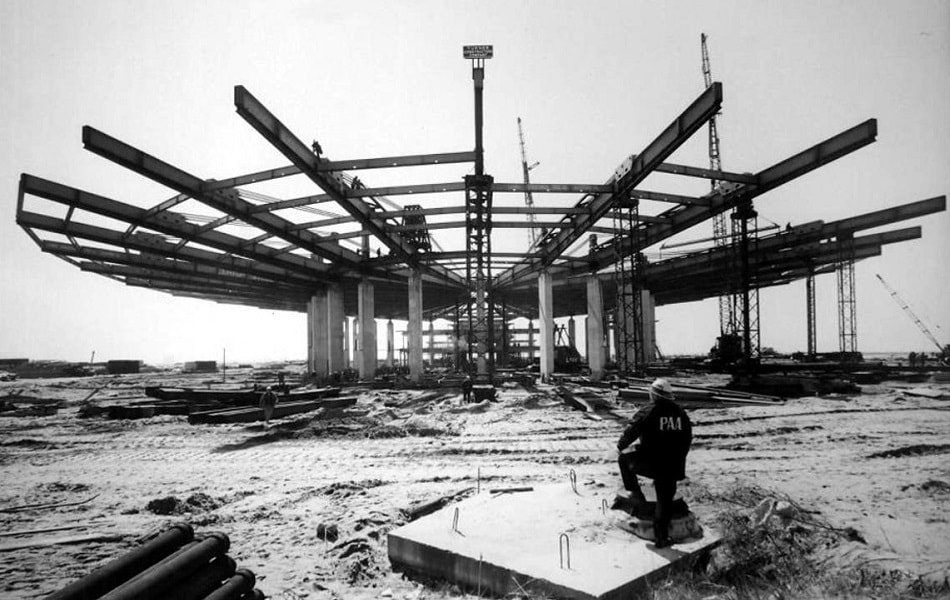 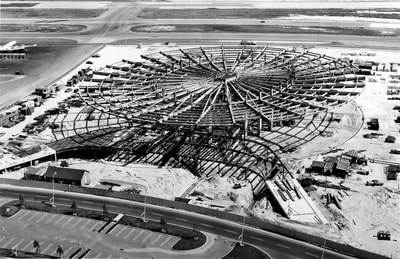 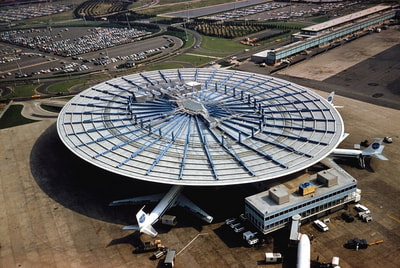 The canopy looks immaculate in this great image! Credit: Chris Bidlack of www.JetAgeArt.com
DEPARTURE PROCESS
​
Passengers entered the terminal through an open entrance. An air curtain maintained the building's climate, a very novel feature at the time.

Passengers checked their bags at one of four check-in islands and then proceeded to one of two seat selection points.

​Once the check-in process had been completed, they could wait in the lounge areas at the gates, step out onto the observation gallery, visit the concessions including kiosks for duty-free shops or ascend to the mezzanine.

​Here there was a cocktail bar, restaurant, coffee shop, bar, a nursery and the Clipper Hall museum, a homage to Pan American's pioneering heritage. Also on the mezzanine level were offices and the Clipper Lounge for frequent fliers. 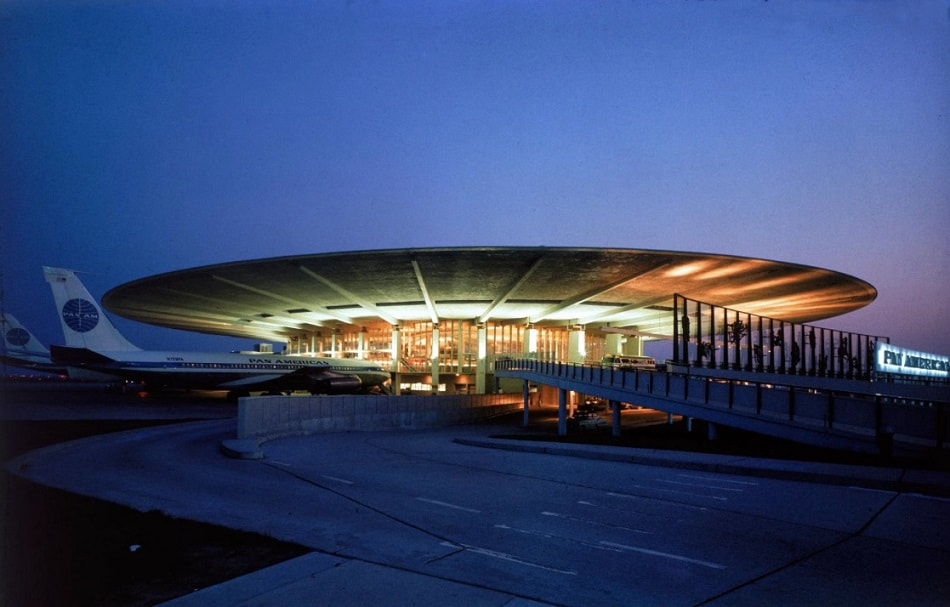 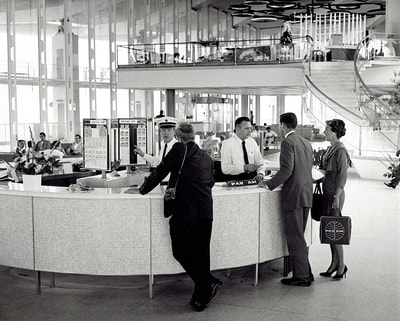 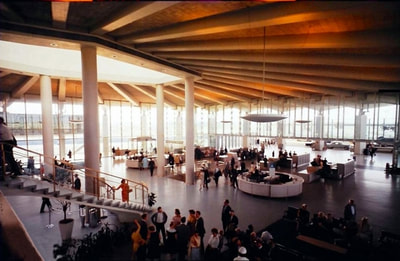 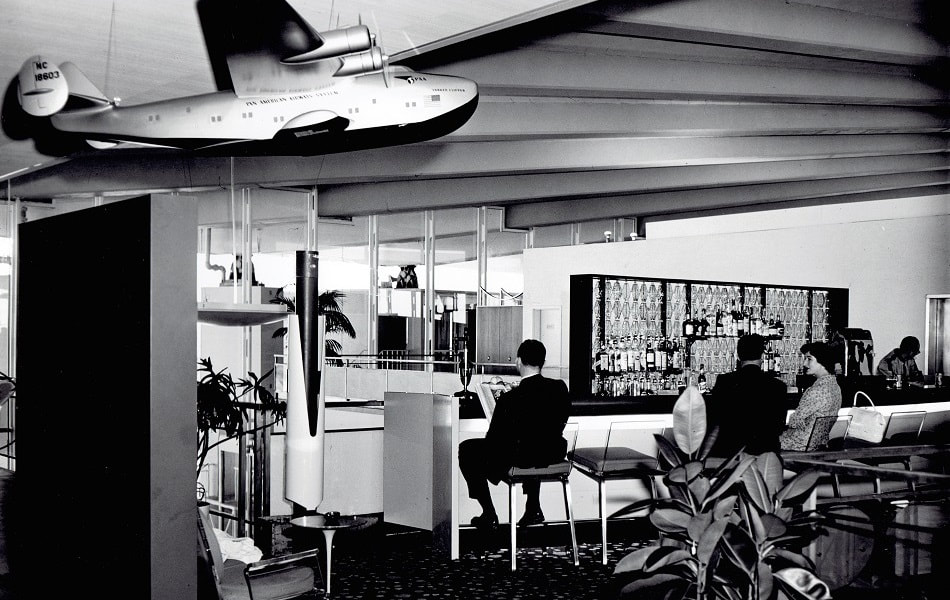 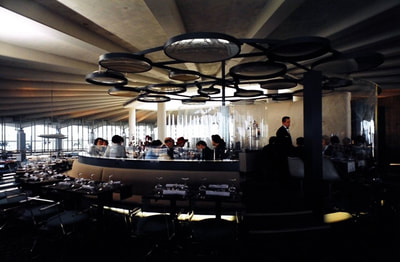 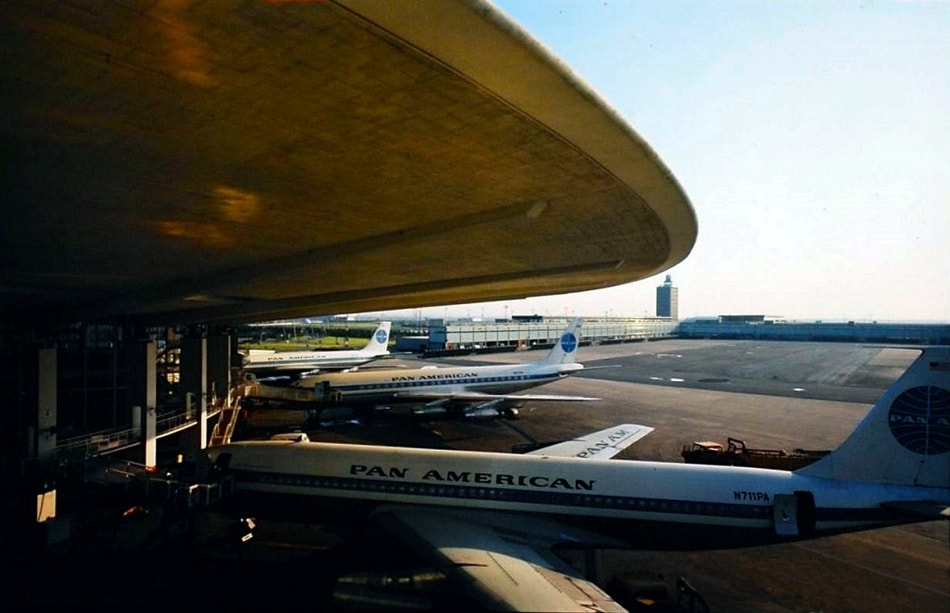 ​Pan American's terminal was the smallest of the airline terminals at JFK at 101,680 square feet (9,446 square meters). With a price tag of USD 12 million, it was also the most expensive per square foot coming in at USD 118. The drama of the cantilevered roof was reckoned to have cost an extra 25% over a more conventional building.

​The Pan Am terminal opened on May 24th, 1960. In that year's annual architectural competition sponsored by the Queens Chamber of Commerce, it won a special award as Queens' most outstanding structure. However, in general the Pan Am terminal was eclipsed in terms of critical acclaim by Eero Saarinen's work for the TWA Flight Center at Kennedy.

In Part 7 will revisit the Pan Am terminal, when we discuss the late 1960s Worldport expansion.

To decorate the windscreen, sculptor Milton Hebald was commisioned to produce a set of bronze works of the 12 signs of the zodiac. Credit: Getty Images/Dmitri Kessel 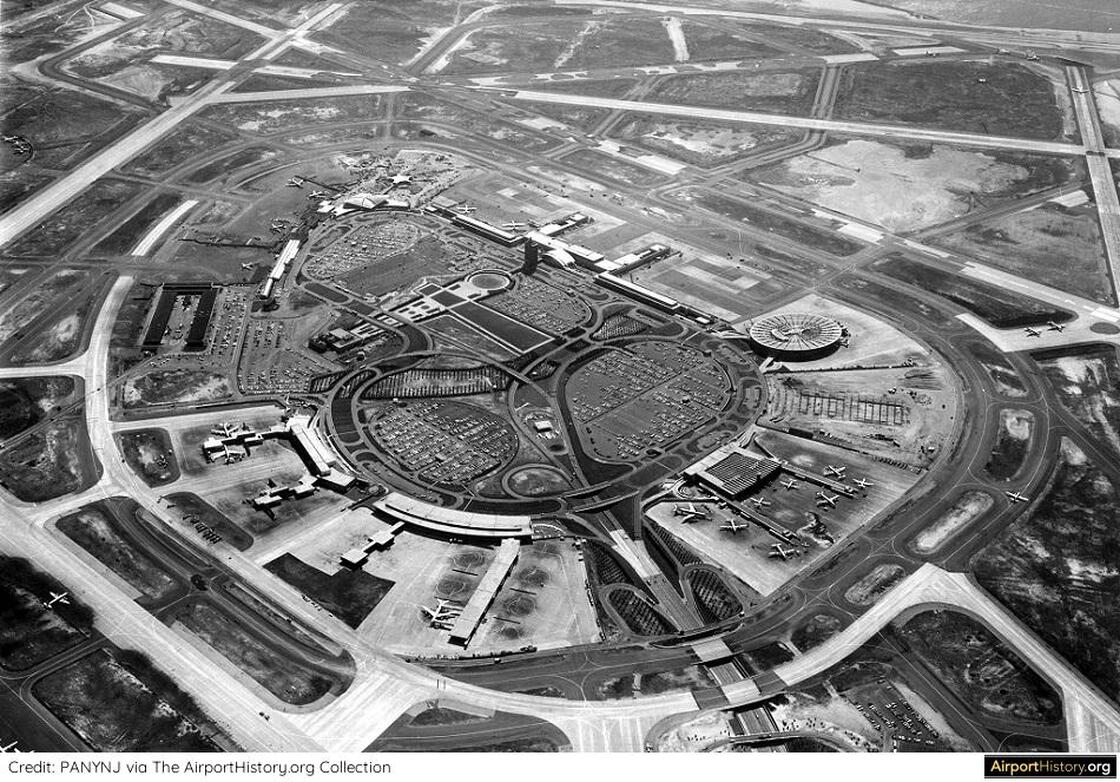 This aerial shows the state of affairs at Kennedy airport in 1961. The airline terminals for American, United, Eastern and Pan Am are completed. The terminals for TWA and Northwest/Braniff/Northeast are under construction.

A model featuring the TWA name on the roof, a feature which was never implemented. Credit: Library of Congress
GALLERY: DESIGN

To be continued in Part 6!

This concludes the fifth installment of our history on Kennedy Airport! In Part 6 we will explore the last of the early unit terminals to be completed: the Northwest/Braniff/Northeast terminal. We will also look at some of the other magnificent facilities that were built to support the operation of the airport.

Do you remember visiting the Pan Am terminal and the TWA Flight Center in the early years? Tell us about it below!