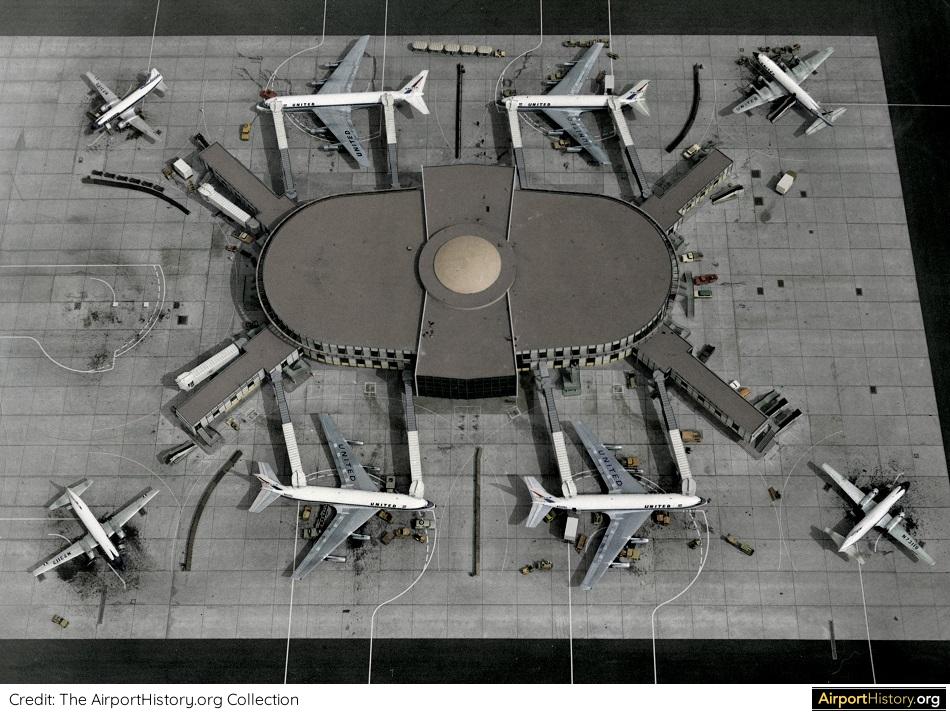 Los Angeles International Airport--known around the world simply as 'LAX'--is one of world's busiest airports. When its current passenger terminal complex opened in 1961, it was a revolutionary and state-of-the-art facility.

In subsequent decades, the airport went through several rounds of expansions in order to cope with ever-increasing passenger numbers, and it had to do so within the current footprint. This negatively impacted both the aesthetics and the passenger experience.

Currently, the airport is making strides in turning itself once again into a world-class airport. The expanded Tom Bradley International Terminal (TBIT) is considered one of the world's great airport terminals, several new terminals will be built in the coming years and many of the older facilities are in the process of being upgraded.

​Ground transport issues are being addressed as well with the construction of a ground transportation center (GTC) and automated people mover, connecting the GTC to the terminals.

In the near future we will be posting a full multi-part history on LAX, featuring 100s of rare images from the archives of the LAX Photo Archives-Flight Path Museum.

For a taste of what's to come, AirportHistory.org presents a two-part photo special, exploring LAX in the 1960s, when the brand new passenger terminal complex opened for traffic. Part 1 below focuses on the overall development and the first terminal to open, Terminal 7, operated by United Airlines. 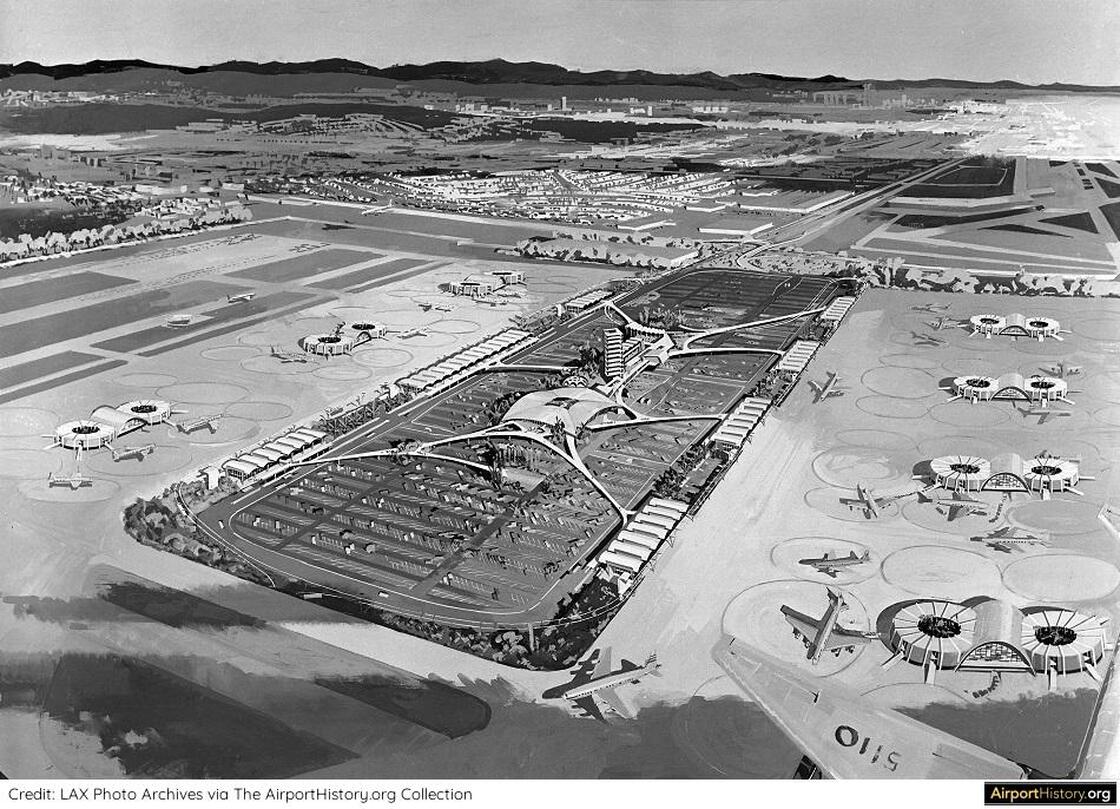 This 1958 artist's impression shows the future passenger terminal area of LAX. Designed by a joint venture of Pereira & Luckman, Welton Becket and Associates, and Paul R. Williams, the plan called for a series of terminals organized around a central parking area. Each terminal had a satellite building out in the middle of the ramp, reached by underground tunnels from the ticketing area. The original scheme depicted above featured a system of trains connecting the terminals, which was later scrapped. The complex was designed to handle 23 million passengers by 1970. The total development cost was USD 70 million. 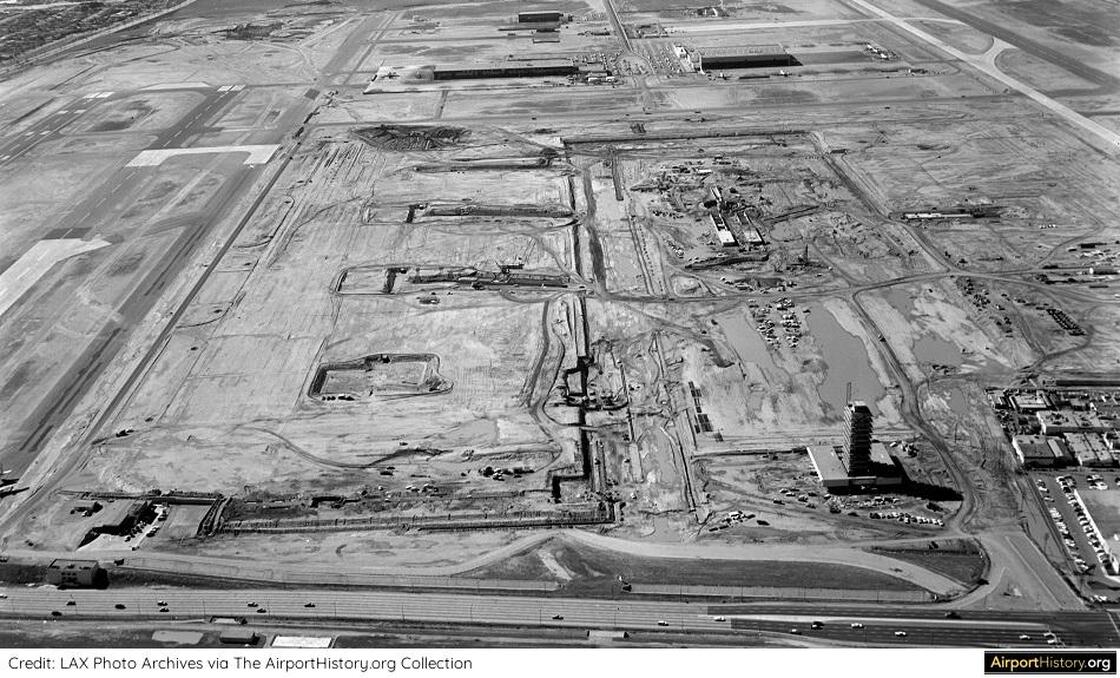 A February 1960 aerial image looking west. Groundwork for the new passenger terminal area is underway. The control tower (foreground) has already been completed. Note the trenches in the center left of the image. These will eventually contain the tunnels that will connect the ticketing buildings to the satellites. ​ 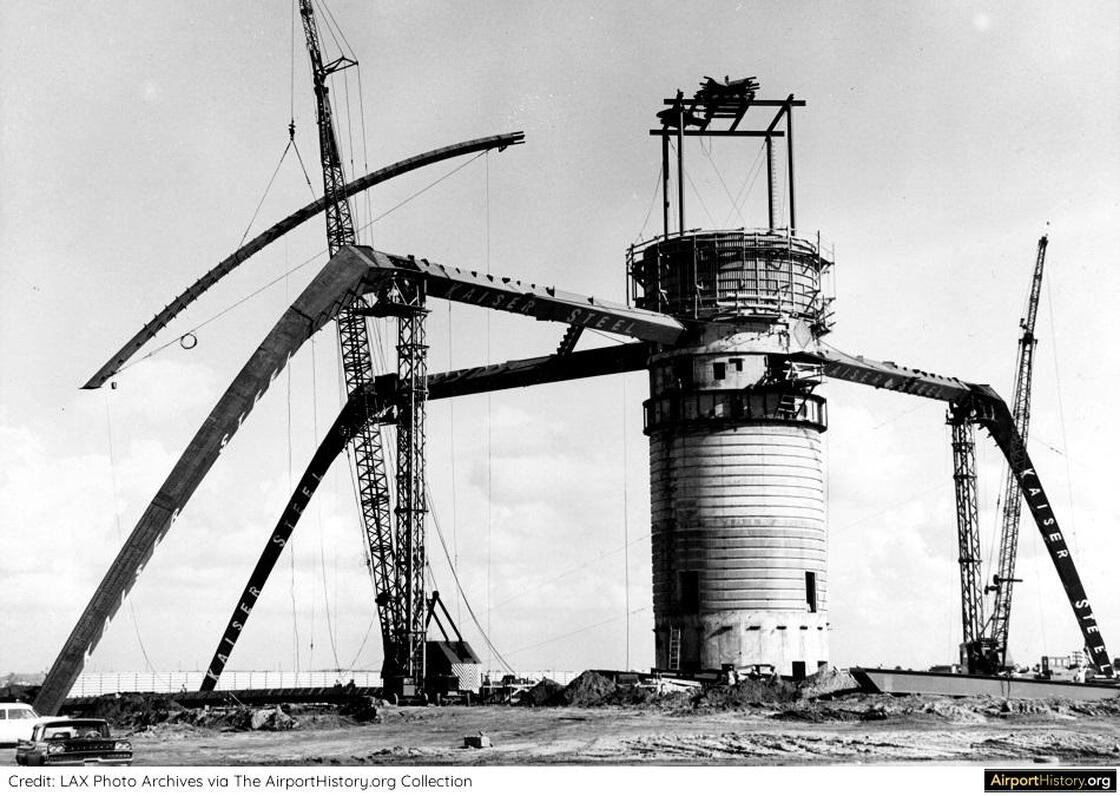 The Theme Building under construction sometime during 1960. The modern parabolic arches of the Theme Building would dominate the center of the terminal area, with four "legs" rising 135 feet (41 meters) from the ground and 340 feet (103 meters) across the base. It would contain a restaurant and observation deck, with an employee cafeteria at ground level. 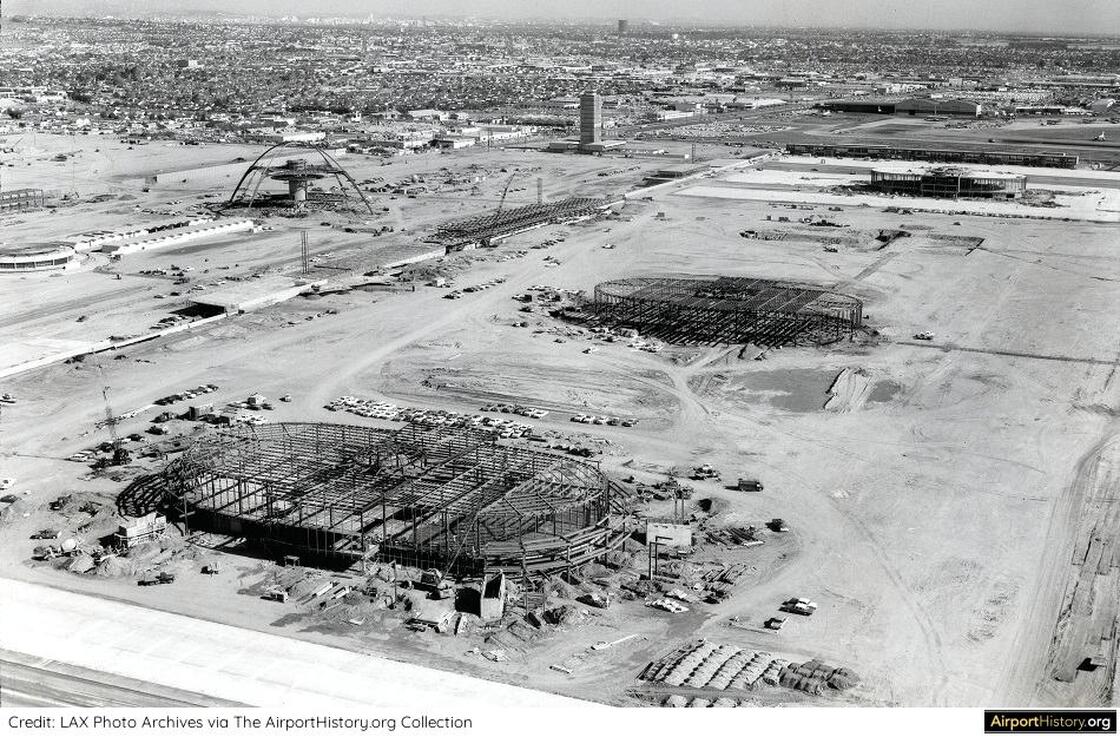 This November 1960 aerial view looking east shows the construction of satellites #4, #5 and #7. Construction of the legendary Space Age Theme Building in the upper left is also progressing well. ​ 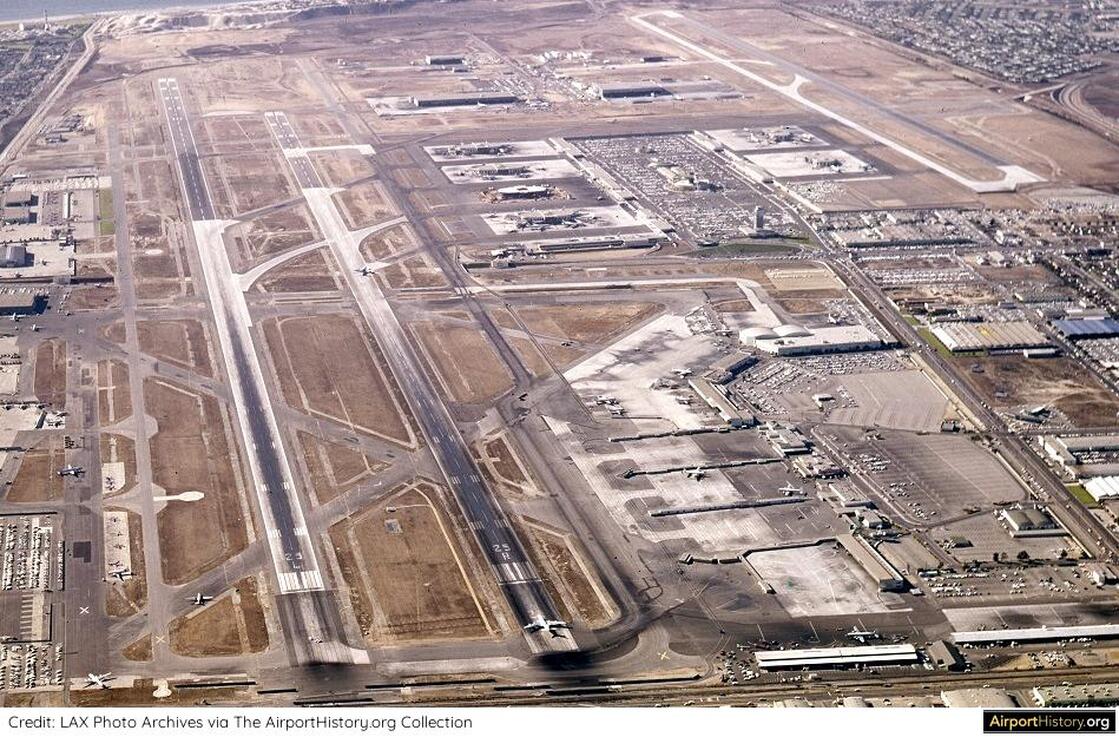 A 1961 color aerial image of LAX looking west. The new terminal area is located in the top of the image. Most of the new airline terminals are now operational with the exception of Terminal 6, which is still under construction. At this time, the old terminal building in the lower right is still in operation. After all airlines had transferred to the new facility, it would be closed and converted to cargo buildings. Note that at this time LAX had three east-west parallel runways. The fourth parallel runway opened in the early 1970s. ​

An airport for the Jet Age 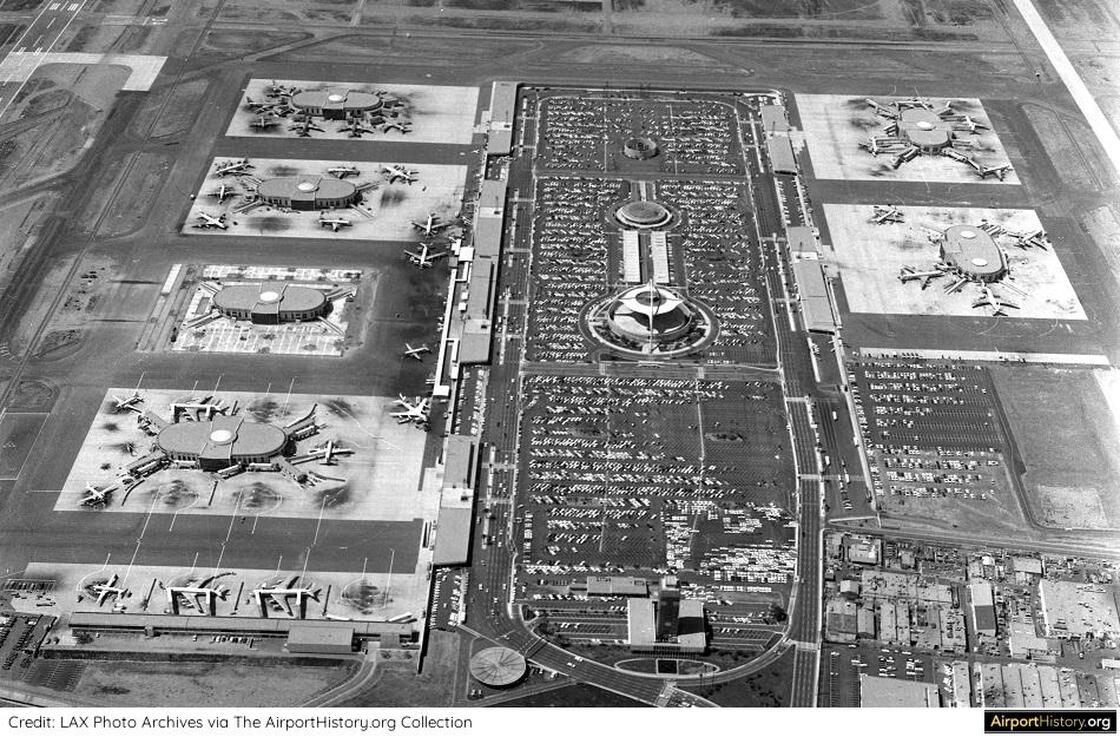 ​This 1963 aerial of the newly completed terminal area shows the simple and brilliant concept of the new LAX. Passengers could conveniently park their cars close to the terminal. After check-in, they would proceed to the satellite buildings via an underground tunnel, from where they would board their aircraft. Aircraft could freely circulate around the ramp. The parking area in the lower right of the image is an allocation for a future seventh terminal. 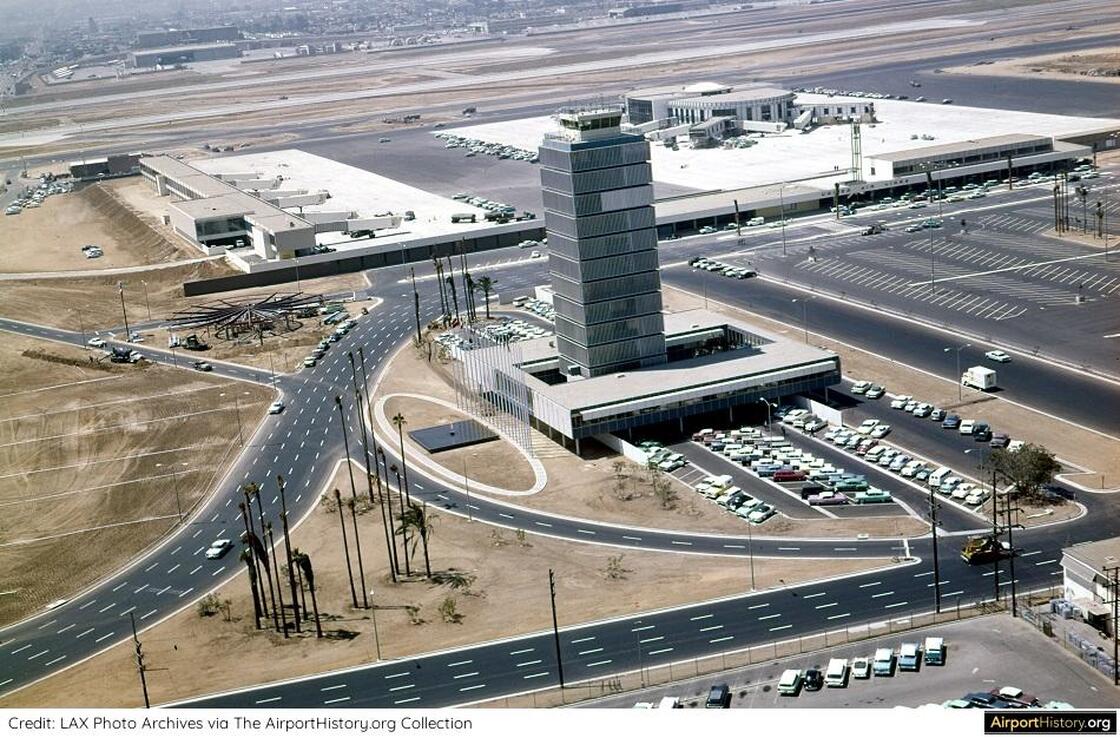 A 1961 aerial image showing the new LAX air traffic control tower and administration building, located at the entrance of the new passenger terminal area. The 162-foot (49-meter) tower--the highest in the nation at the time--was the identifying landmark of the airport and served a dual function. The lower level wings housed the administrative office of the Department of Airports. The upper floors of the control tower housed personnel and equipment of the Civil Aeronautics Administrations' air traffic control. ​ 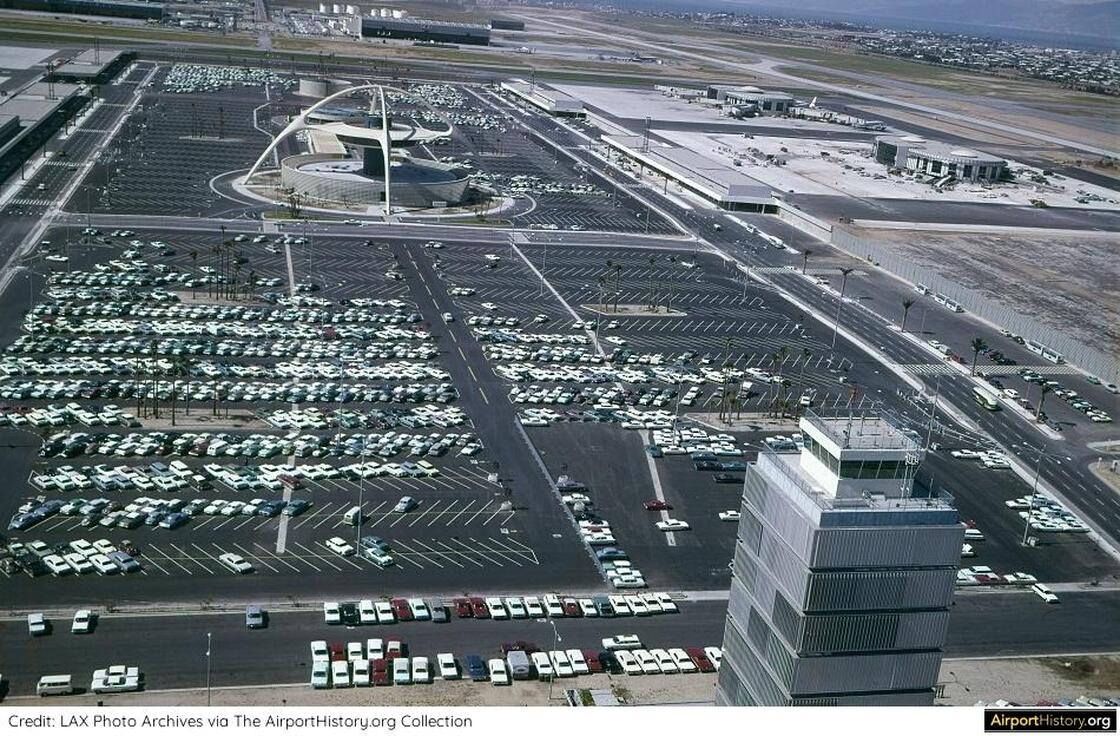 An undated early 1960s view of the core area of the passenger terminal area looking west, showing the air traffic control tower in the foreground. The Theme Building is located in the middle of a 5,000-car parking area. To the right and left are the various ticketing facilities. The two large structures in the background are the American (L) and TWA (R) maintenance hangars. ​ 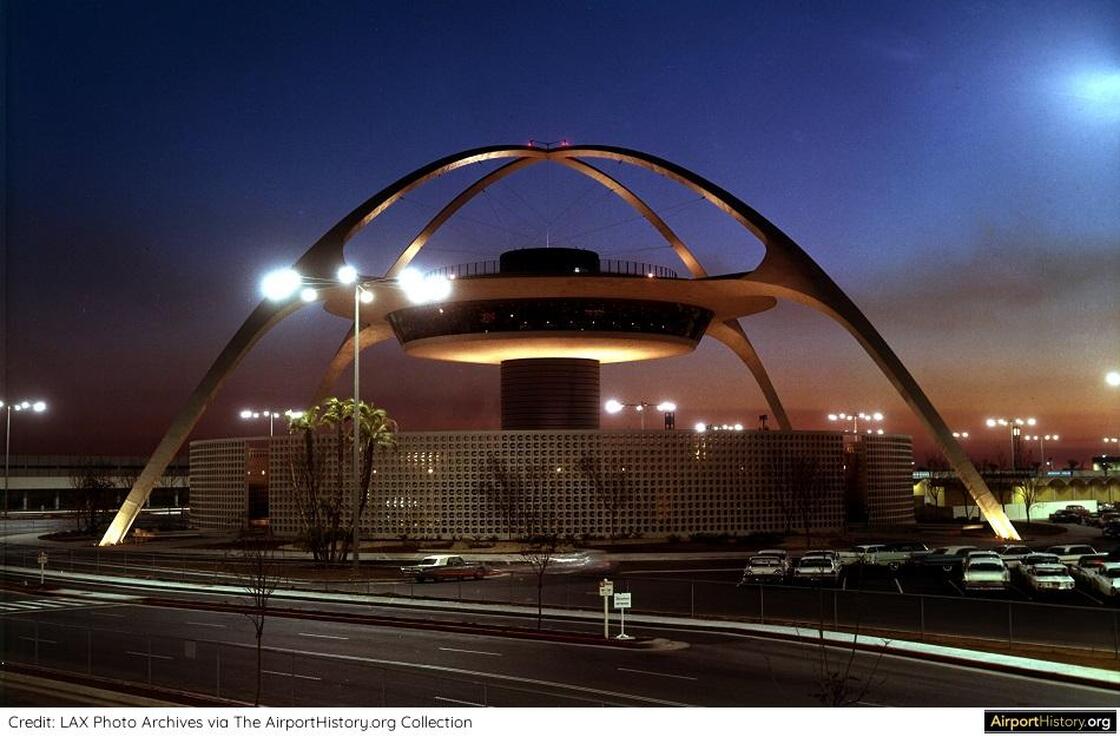 More than 3,000 people visited the Theme Building observation deck during the opening weekend in January, 1961. The restaurant, located 70 feet (21 meters) above the parking lot, commanded a view of field operations from all sides, with seating for about 300 guests. ​ 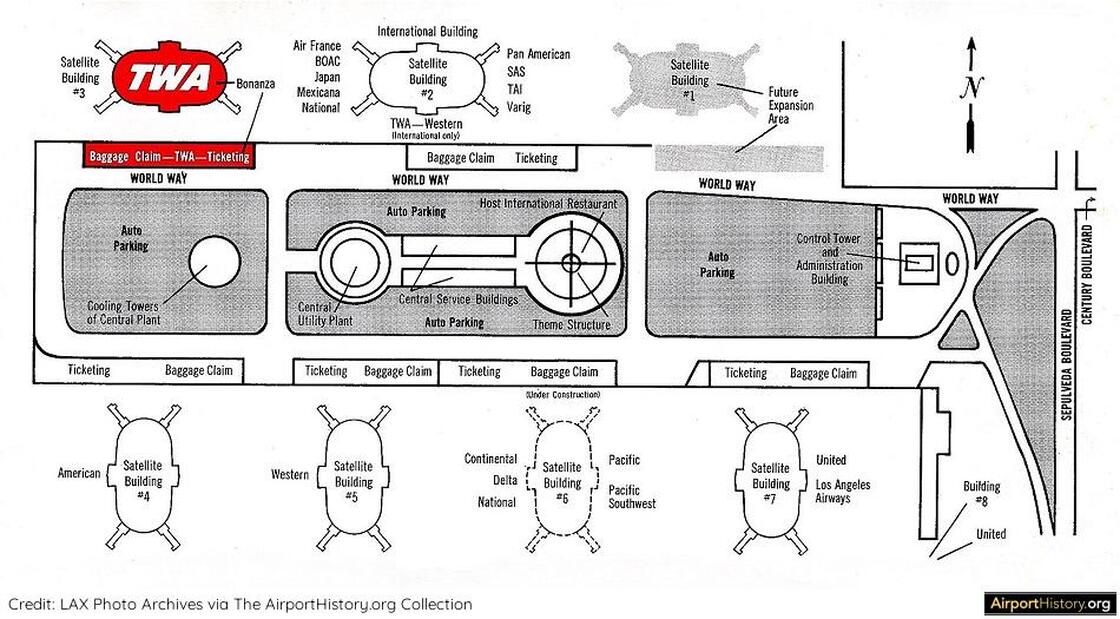 A 1961 TWA terminal guide showing the distribution of airlines over the various terminals. Credit: Jon Proctor. Jon has been a great help over the years. Be sure to check out his wonderful website, which contains great images of US airports during the early Jet Age, including LAX.

A tour of United's Terminal 7

On August 18th, 1961, United became the first carrier to begin operations from the new terminal complex, occupying Ticketing Building 7 and the associated Satellite 7 and Building 8, which was a more conventional linear concourse. 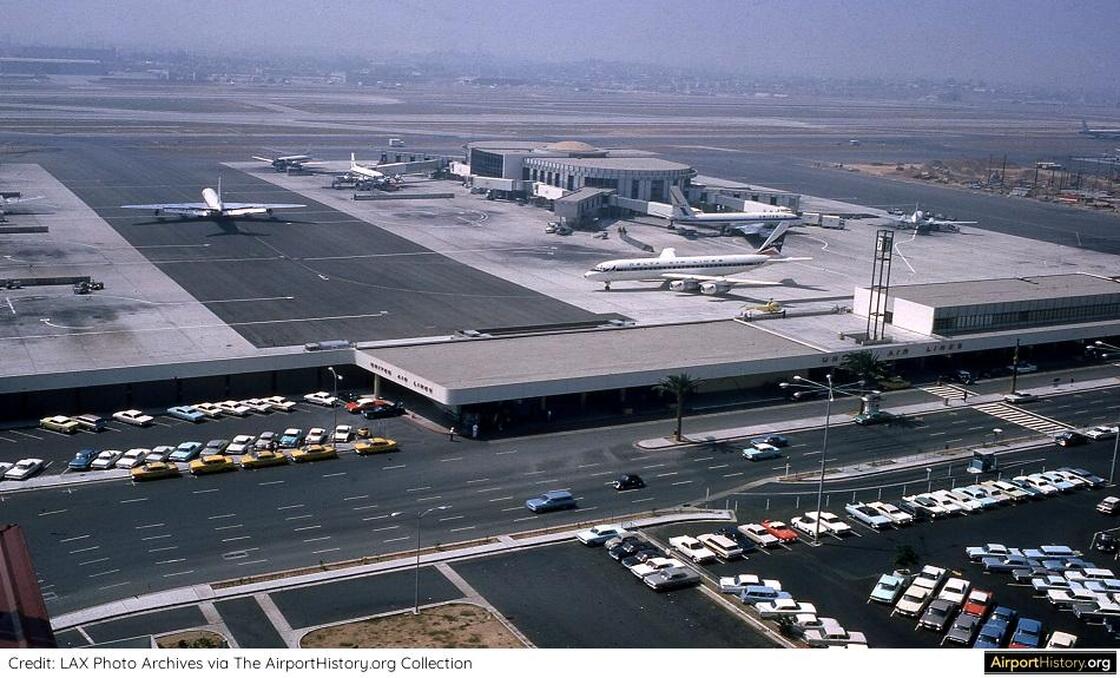 A late 1961 aerial view of Terminal 7, taken from the air traffic control tower. The parking and roadway were actually below grade and passengers did not have to change level to reach the satellites. The plans for the ticketing buildings were highly flexible. Not only could they be lengthened, foundations were built to allow for second and third levels. Note Satellite 6 to the right, which is still under construction. ​ 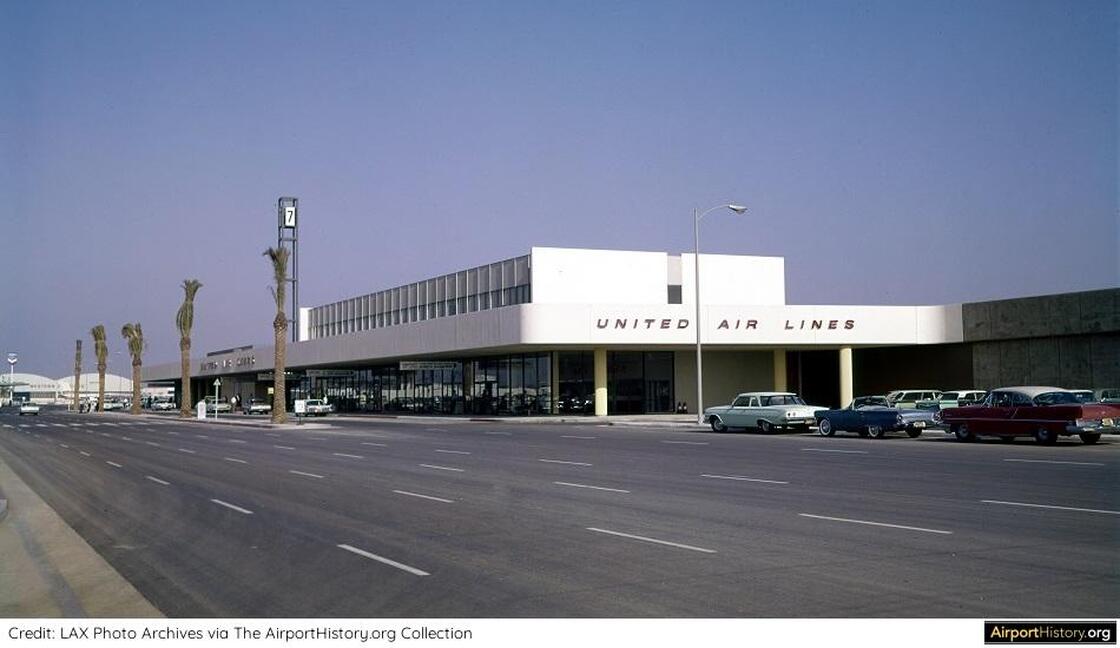 An early 1960s exterior view of Terminal 7. Each individual terminal at LAX was capable of handling several million passengers annually, more than the total throughput of some major airports at the time such as Boston. ​ 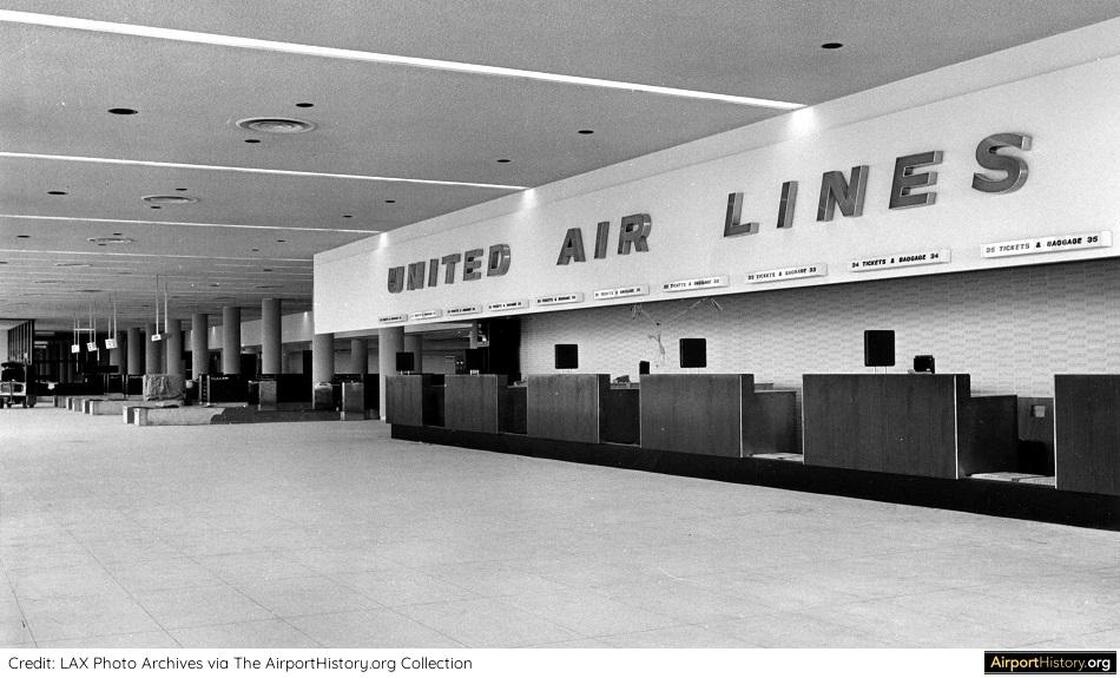 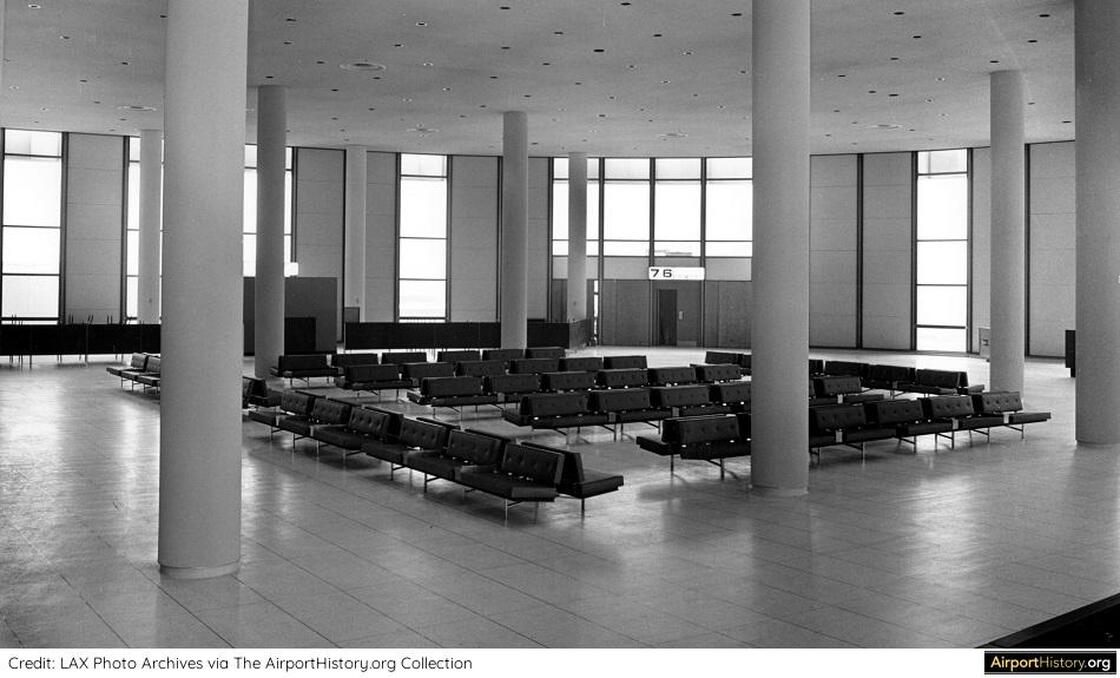 A 1961 interior view of United's satellite 7 before dedication. From this image it seemed like a rather austere place, but each satellite contained a restaurant, cocktail lounge, rest lounges and a gift-newsstand. ​ 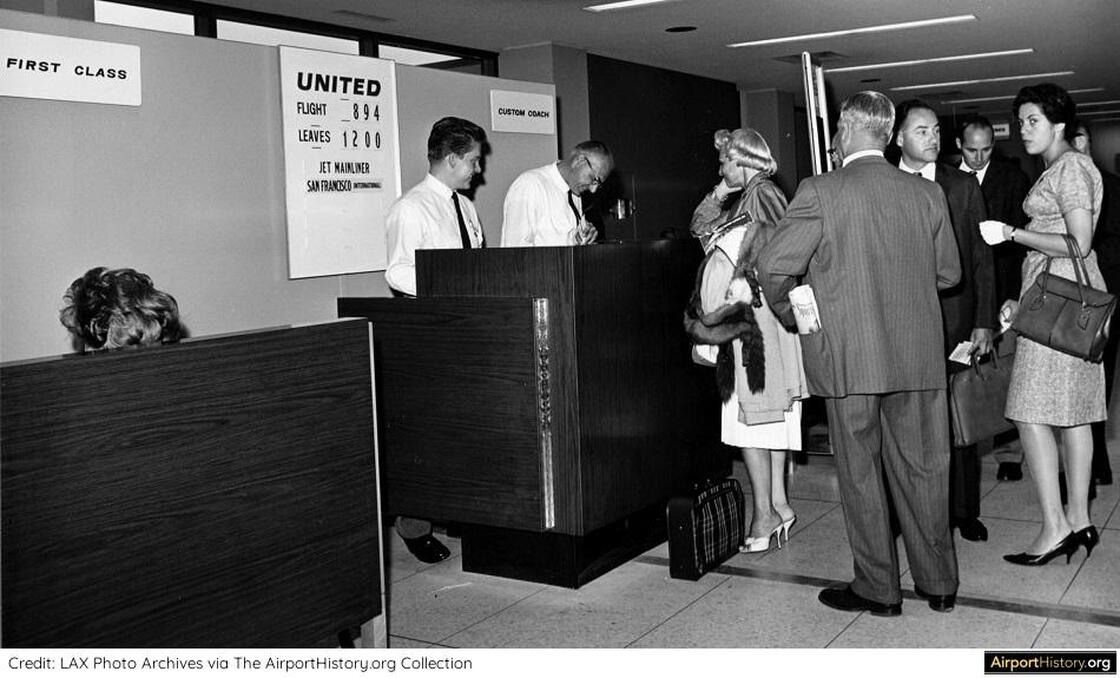 Passengers are boarding for United flight 894 to San Francisco at Satellite 7. ​ 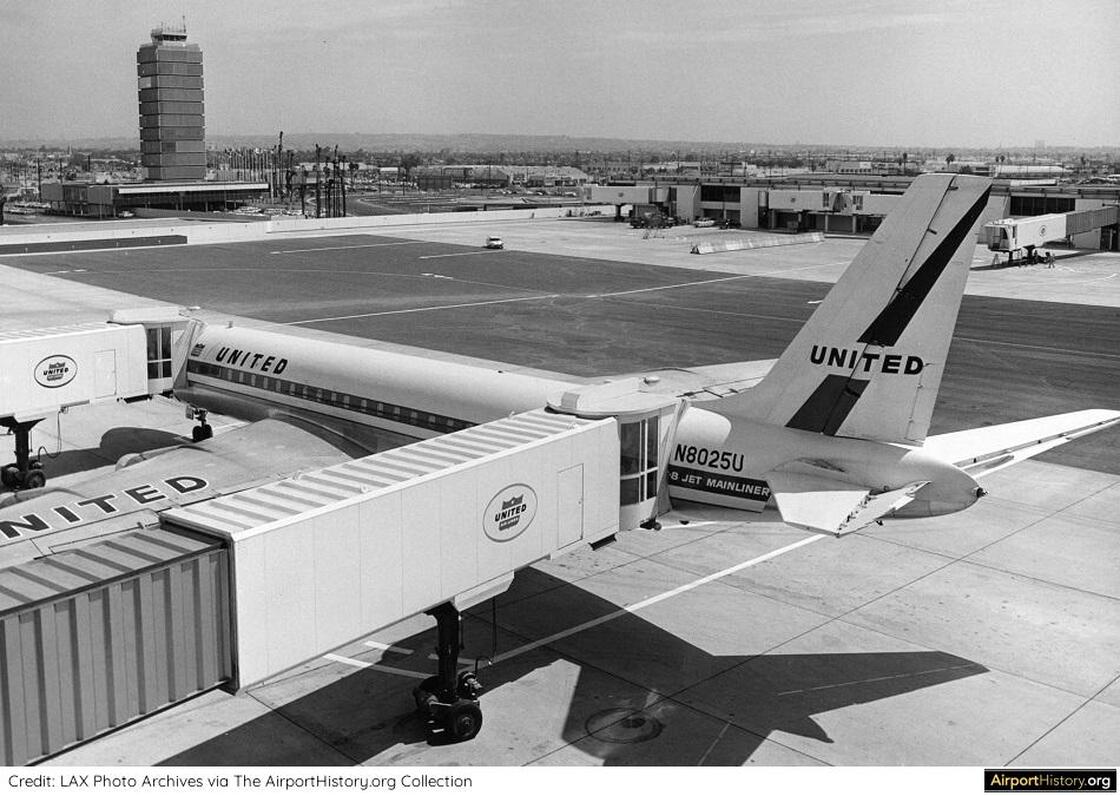 A United DC-8 docked at Satellite 7, with the LAX air traffic control tower in the background. In the 1960s and into the 1970s, aircraft often parked parallel to the concourse, allowing them to taxi in and out under their own power. This also allowed for boarding bridges to be connected to both the front and back of the aircraft. First class passengers would use the front boarding bridge and passengers traveling in coach the one in the back. ​ 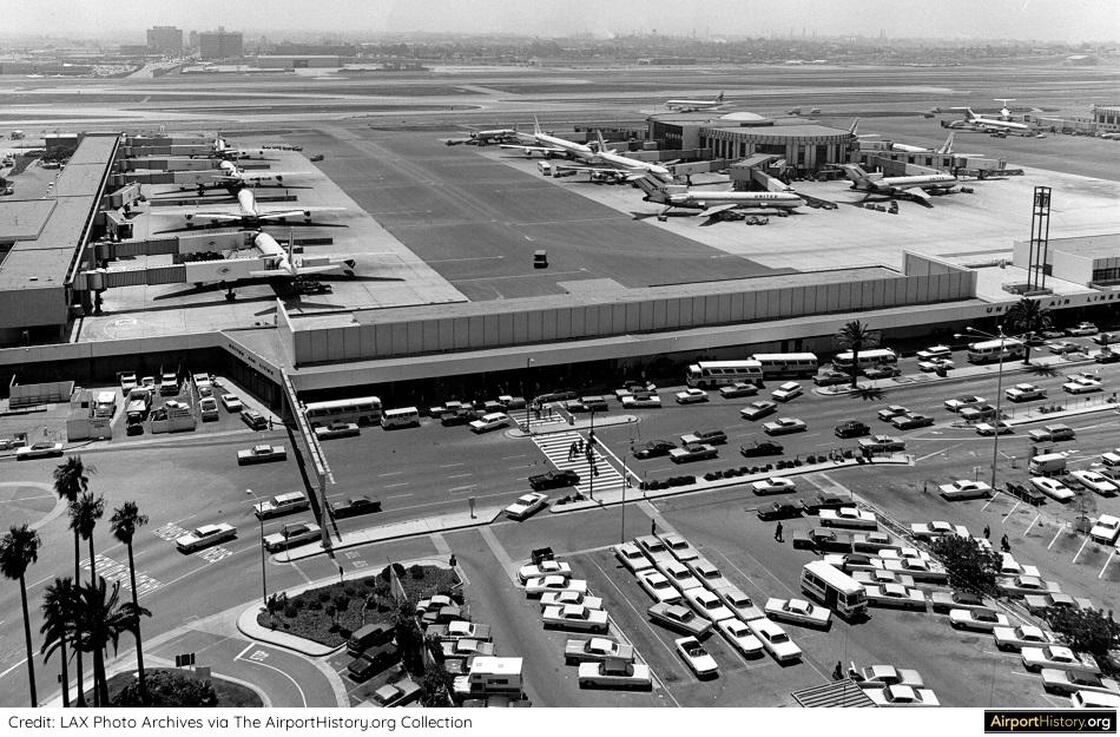 Another exterior image of Terminal 7, taken from the air traffic control tower in 1968. By now Boeing 727s have entered the scene. This image also includes Building 8 to the left, which was a conventional concourse and part of United's complex. It's easy to see that the kerbside has become a lot busier than in previous years! ​ 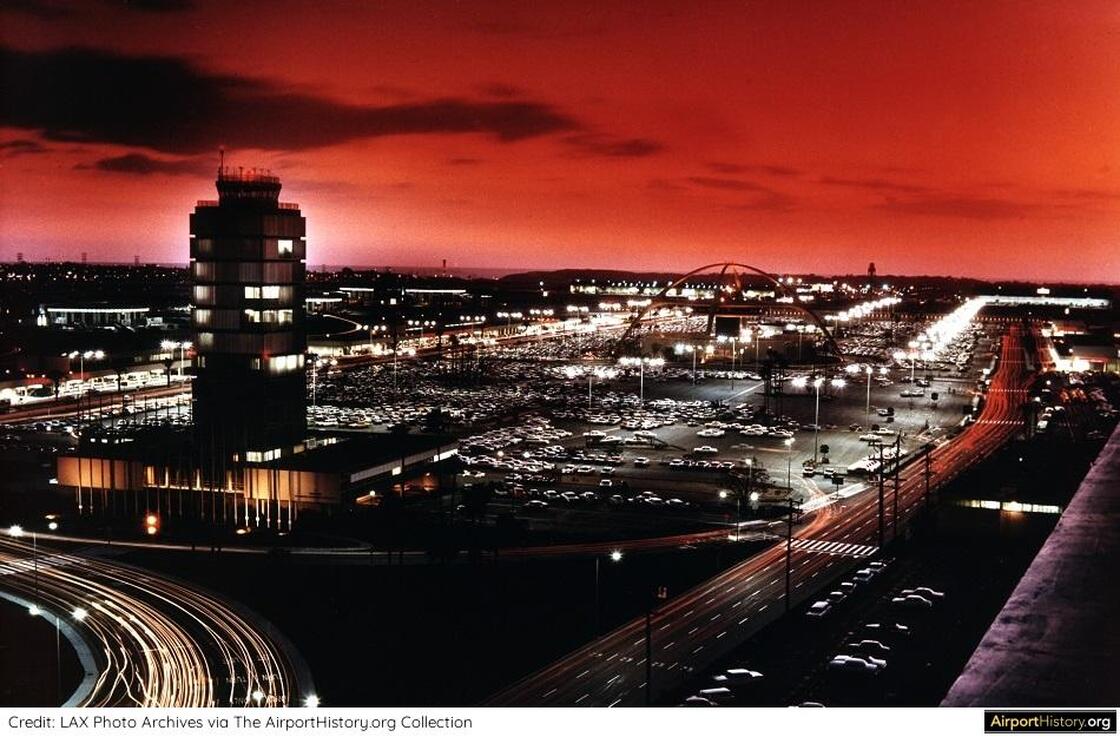 We end Part 1 with an horizon view of 1960s LAX taken at dusk. ​
That concludes Part 1 of our photo special on 1960s LAX. In the next part, to be posted soon, we will explore the other airline terminals, as well as some of the other facilities. We are also in the process of planning photo specials on the 1970s, 1980s and 1990s!

​Did you visit LAX in the early Jet Age years? Leave a comment below and share your memories!
More Airport Articles