Tullamarine was Australia's very first Jet Age airport to built from scratch and in this article, we will take you back to the planning phase of Tullamarine and demonstrate that the airport was planned with amazing vision, vision from which the current airport management is still benefiting from.

For example, the Tullamarine Master Plan was one of the world's first to implement a large bufferzone around the airport, protecting neighboring communities from noise and safeguarding future development.

Most interestingly, the airport was the world's first airport with extensive landside facilities meant to generate non-aeronautical or non-aviation business revenues (link). Now known as the "airport city concept", where airports start resembling cities due to fact that they offer city-type facilities within their perimeter, airports like Schiphol and Frankfurt have often been credited with implementing the airport city concept first back in the 1980s.

However, it was in fact Tullamarine that implemented it long before any of the others and in this article we'll set the record straight. All of this was driven by one man, Dr. Bill Bradfield, a man who should be considered one of the great visionaries of his time.

Now, re-appreciate the this great airport with this multi-media trip back in time!

In 1958, the Australian Director-General of Civil Aviation established a 28-man Melbourne Airport Panel to advise on the future airport development for Melbourne.

These 28 men,  consisting of delegates from the government, the air force, the pilots and the major airlines, recommended unanimously that a site at semi-rural Tullamarine, 12 miles (19 kilometers) north-west of the city should be developed as an airport to meet Melbourne's growing needs.

​The lands which had been held by 39 separate owners was acquired for AU$ 4.7 million in the period from 1959 until 1964.
THE MASTER PLAN

In 1958, Tullamarine was proposed as Melbourne’s new jetport site and the Federal Government ratified this decision in 1959.

Land acquisition occurred from 1959 to 1963 while the functional plans were finalized in 1963.

Plans for the use of airport land for non-aviation purposes occurred early on. The first mention of industrial parks on airport land occurred in 1958

In 1958, the designers set out to build Australia's very first greenfield Jet-Age Airport, or Jetport.

There was ample space to extend runway 09/27 and the master plan provided space for the construction of two additional runways on the south side of the airport to give to sets of parallel runways, although this would involve extensive taxiing.

Functional areas like the passenger terminal area and the freight were all well separated in order to ensure room for expansion for each function. A large area in the south of the airport was reserved for a future aircraft maintenance area.

​In order to ensure that urban development would encroach upon the airport a large buffer zone was created around the airport.

In Australia, Tullamarine was the first airport to incorporate systematic buffer zones into its planning not only to decrease noise but for the construction of an Airport City


Under the direction of Bill Bradfield, First Assistant Director-General
of the Commonwealth Department of Civil Aviation, the Tullamarine
Airport was built with a wide range of facilities, all on airport land, which
were intended to generate income from non-aviation activities and lead
to financial sustainability. These included a conference centre, the Astrojet
Centre with its exhibition space, cinema, art galleries, bottle shop, chemist,
milk bar, hairdresser and dentist, a substantial industrial park, fine dining
restaurant, cocktail lounges, VIP meeting rooms, multiple bars, an eighteenhole
golf course and observation decks.

​Most interestingly, the airport was the world's first airport with extensive landside facilities meant to generate non-aeronautical or non-aviation business revenues (link). Now known as the "airport city concept", where airports start resembling cities due to fact that they offer city-type facilities within their perimeter, airports like Schiphol and Frankfurt have often been credited with implementing the airport city concept first back in the 1980s.
Er zit een blemish op de foto onder

​QUOTE ABOUT THE PROBLEM OF AIRPORT DESIGN
- Walter Prokosch, design architect of the Pan Am terminal 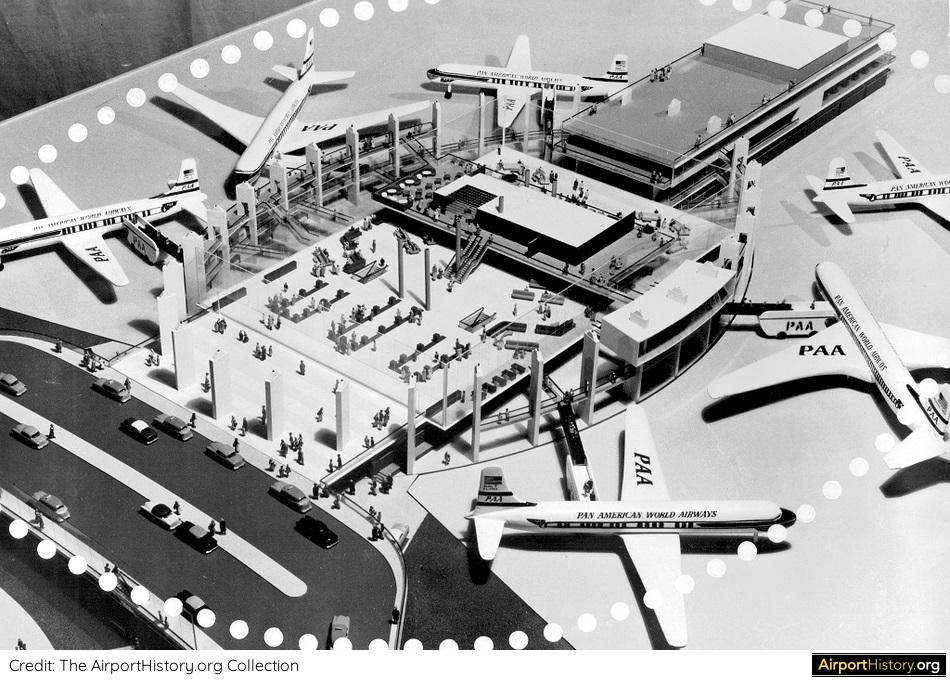 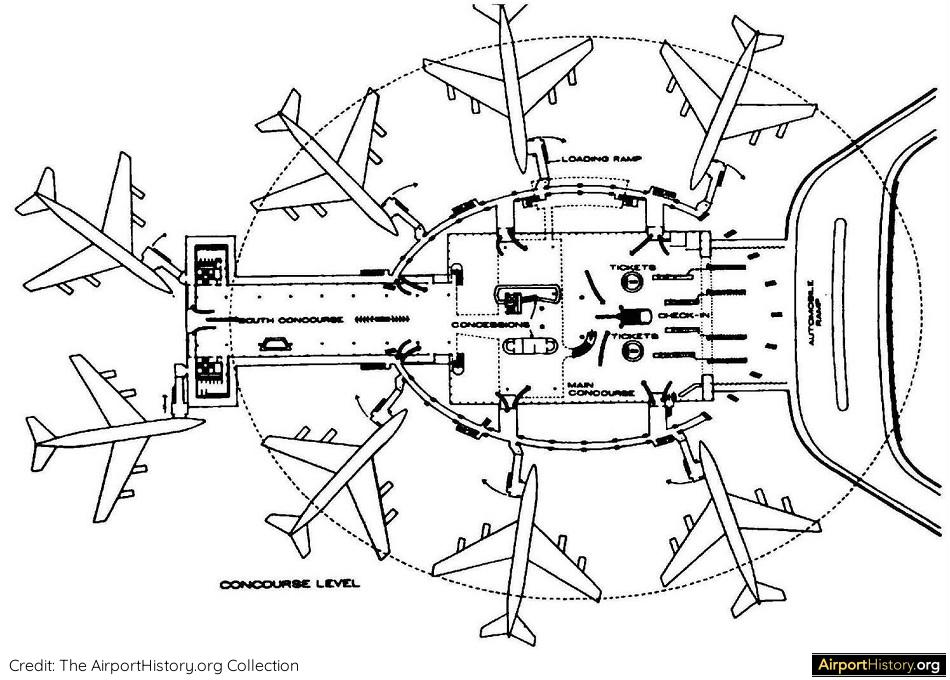 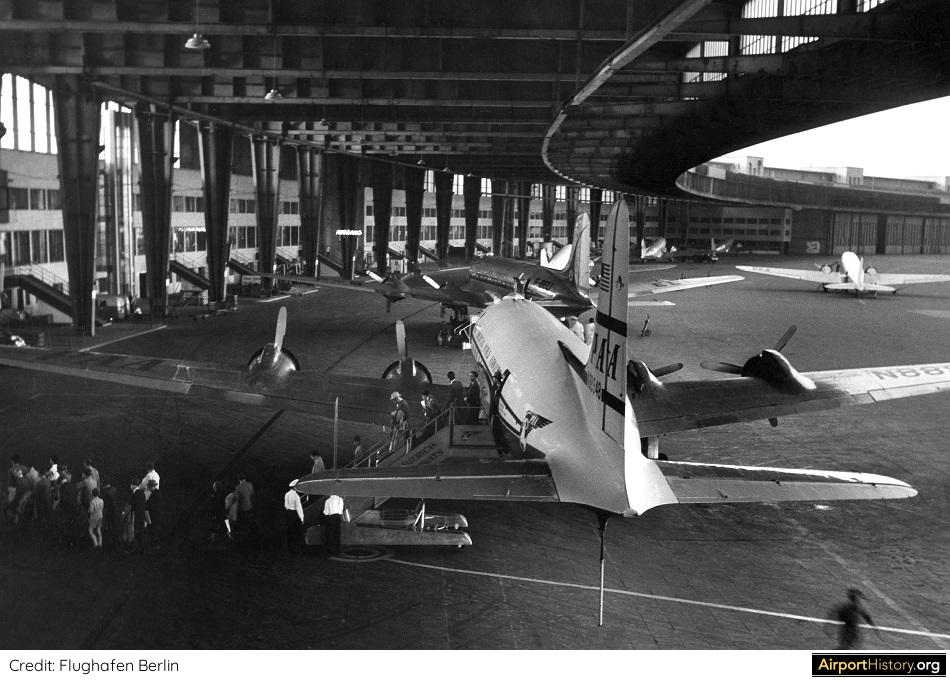 Delays due to design changes. for the 747 construction delays. Bad because airlines stopped serving Essendon

Later on, length of runway was adjusted.
Construction image

GALLERY: AERIAL AND EXTERIOR VIEWS (click photos to enlarge)
The selection of Tullamarine in 1959 offered a site free from constraints yet close to the city. Construction commenced in 1964 and the airport opened on 1 July 1970. The location allowed the airport to operate without a curfew, providing Melbourne with a major commercial advantage over Sydney Airport, including for freight. 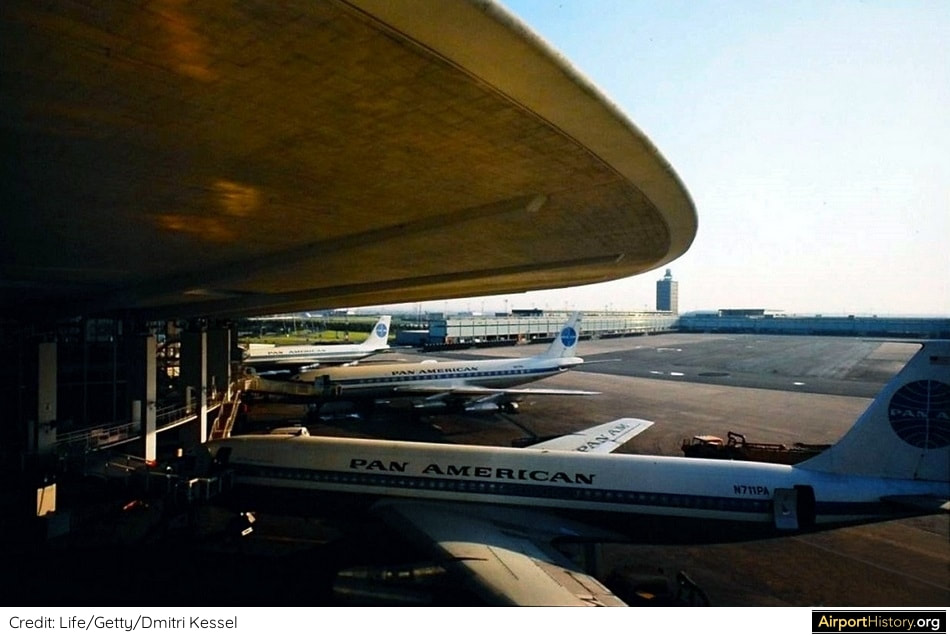 THE PASSENGER PROCESS
​
Passengers entered the terminal through an open entrance with an air curtain maintaining the building's climate, a very novel feature at the time. Passengers checked their baggage at one of four check-in islands and then proceeded to one of two seat selection points to complete the pre-check formalities. 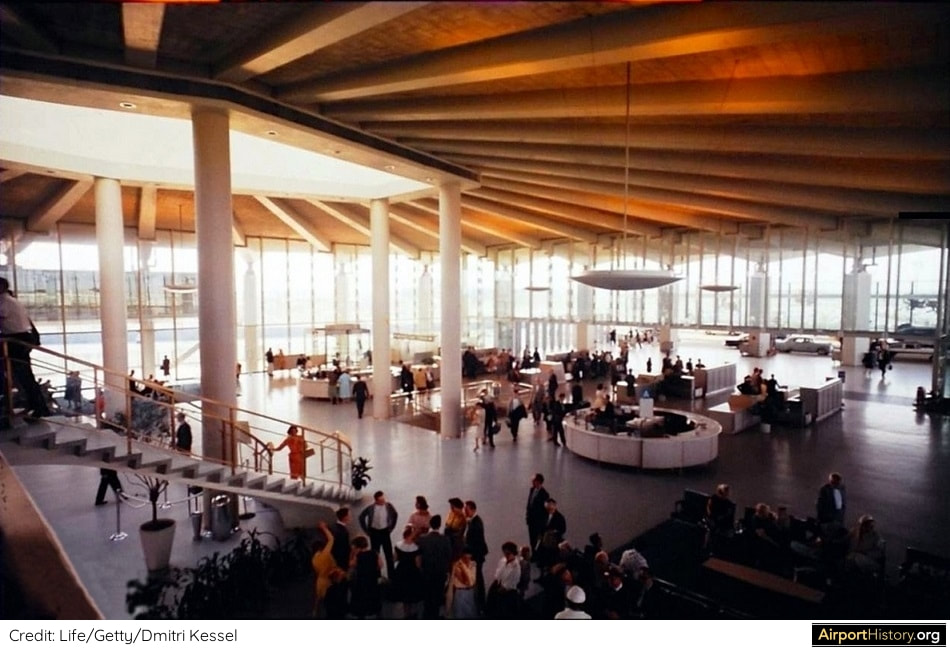 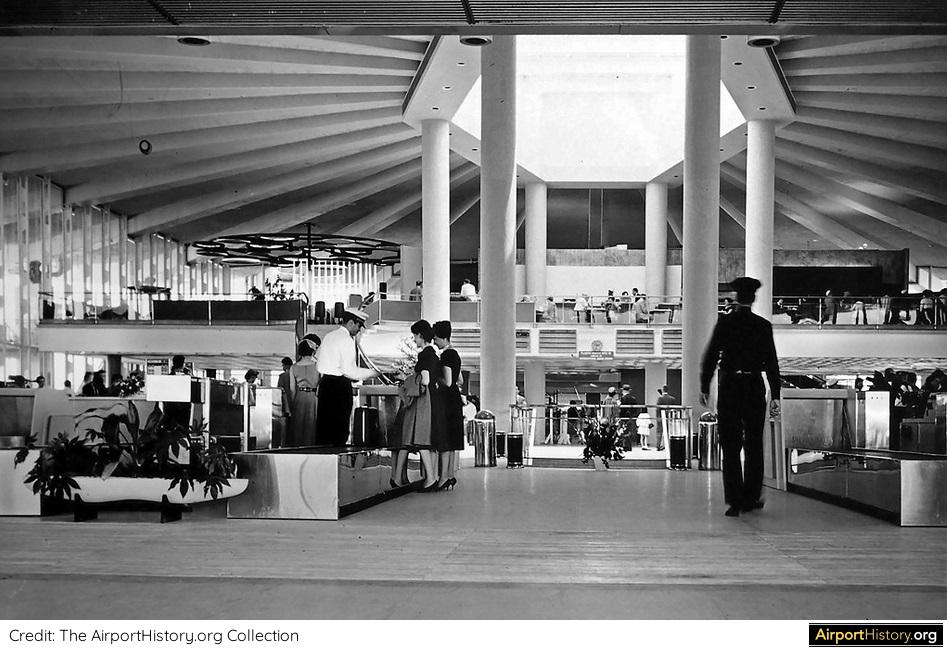 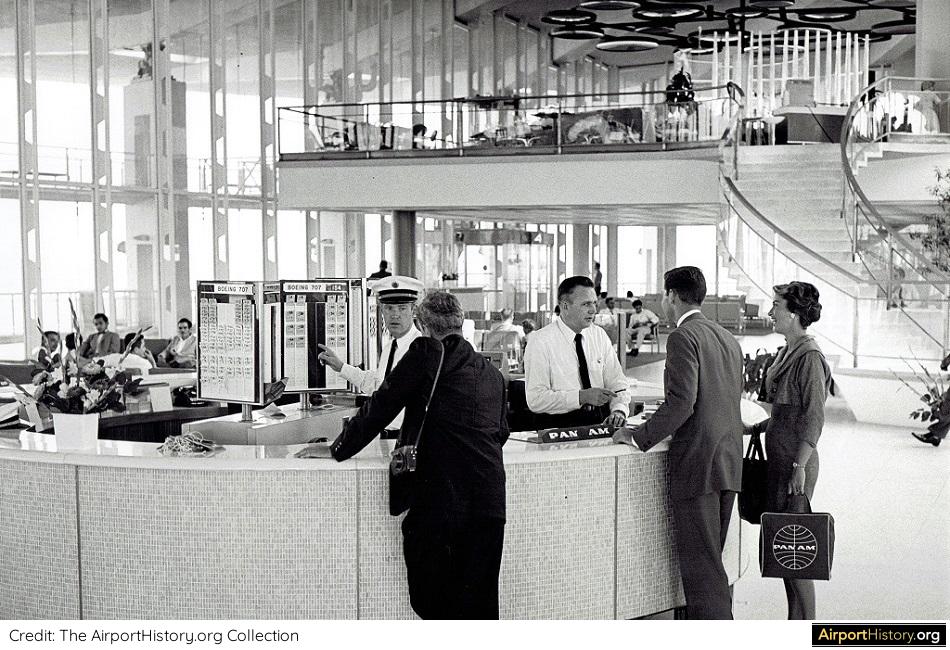 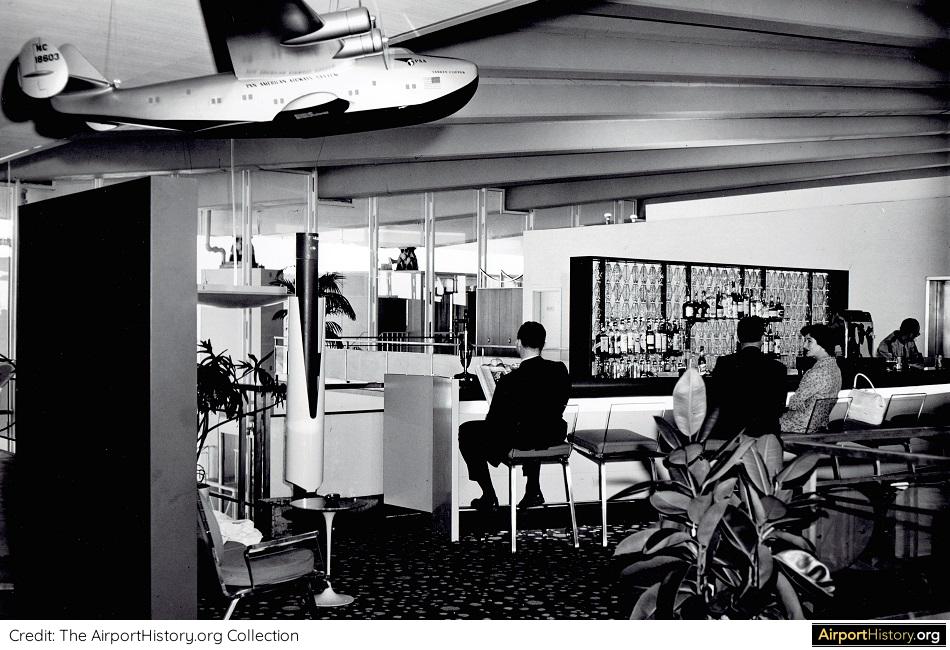 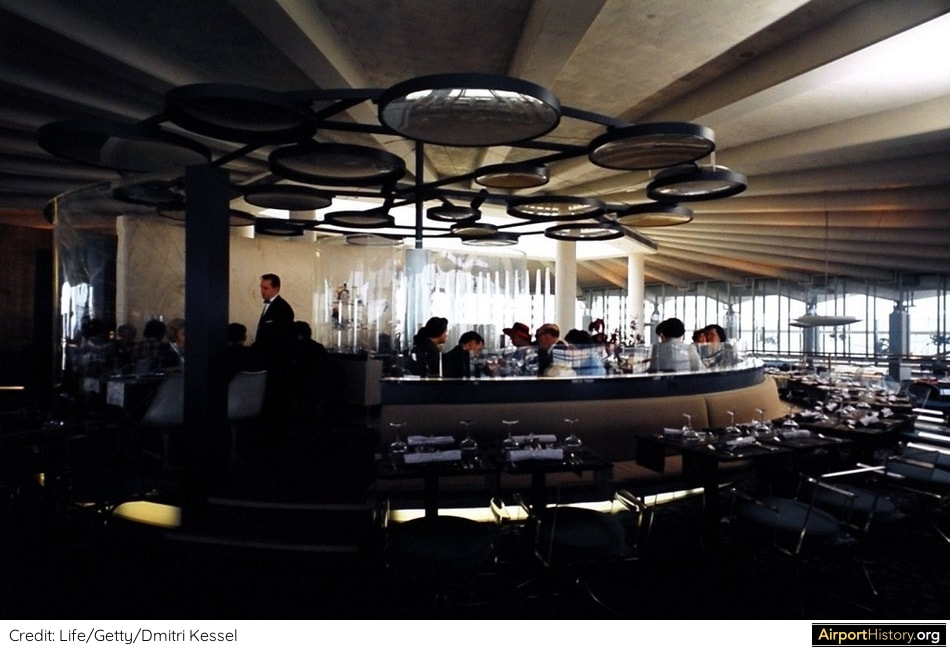 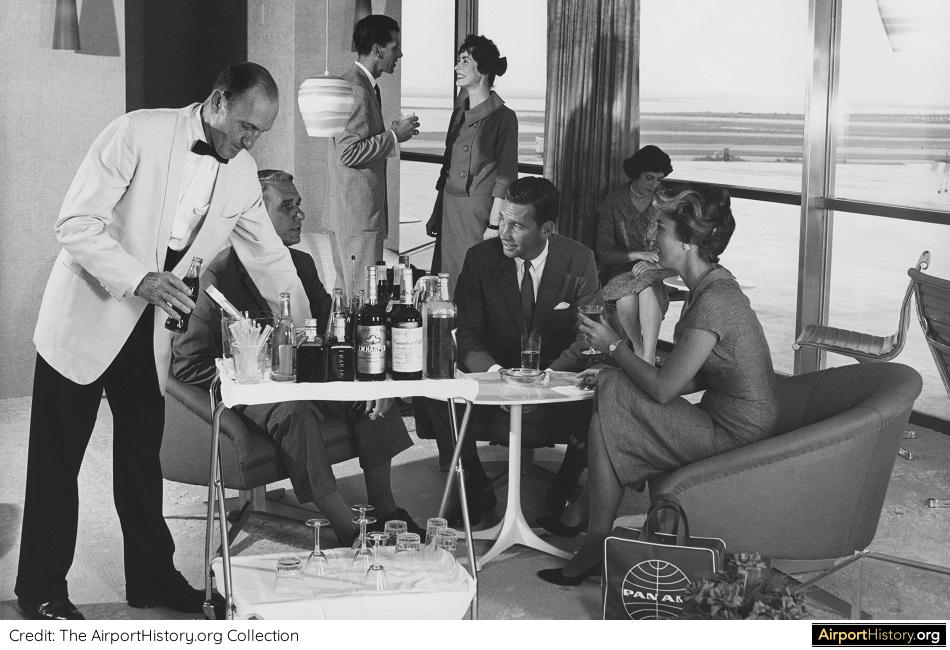 May we welcome you soon? On your way for a delightful flight overseas...to greet an arriving friend...or simply coming to look. You'll be closest to the Jet Age here - and find it wonderfully exciting.
OPENING/FIRST FLIGHT/PHASED OPENING

Pan American's terminal was the smallest of the airline terminals at JFK at 101,680 square feet (9,446 square meters). With a price tag of USD 12 million, it was also the most expensive per square foot, coming in at USD 118. The drama of the cantilevered roof was estimatrf to have cost an extra 25% over a more conventional building.

Want to see more of Tullamarine in the early years?

For our supporters we have bonus section featuring many additional photos as well as some very cool downloads! You can find it here (link).

If you are not a supporter yet, follow this link to our Patreon site!

In the future we will be posting a full history on Tullamarine Airport featuring many rare images from our archives!

Do you remember visiting the Pan Am terminal in the early years? Tell us about it in the comments below!