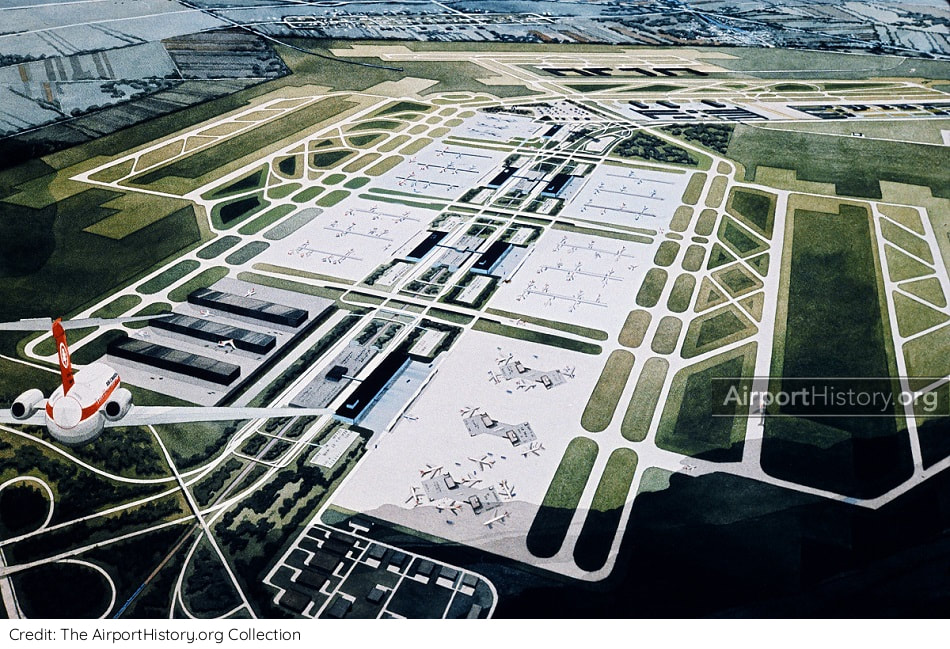 A fantastic artist's impression of Mirabel in the final layout. The proposed airport would have featured six runways and six passenger terminals along with vast cargo and maintenance areas.
By Marnix (Max) Groot
Airport Development
Expert and Historian
Published: February 28, 2019
​Updated: January 30, 2021

​Montréal-Mirabel International Airport was once planned to be one of the largest airports in the world. Envisaged as a major hub connecting Europe with North America, it would have featured six runways and six passenger terminals in its final layout.

However, for a variety of reasons, this grand vision never materialized. The airport never handled more than 3 million passengers annually, and in 2004, it was closed for passenger traffic. Mirabel became known as the biggest airport planning blunder in the world.

Nevertheless, this does not do justice to the fact that the airport itself was a very well-planned facility. The passenger terminal, for example, was very advanced for its time and considered one of the world's best. In recent years, Mirabel has found some "redemption" as a very successful aviation production cluster.

In this multi-part article we will present the fascinating history of Mirabel and provide some new insights into the story. In this fully updated first part, we will focus on the Master Plan and the rationale behind the new airport.

Big plans for an ambitious city 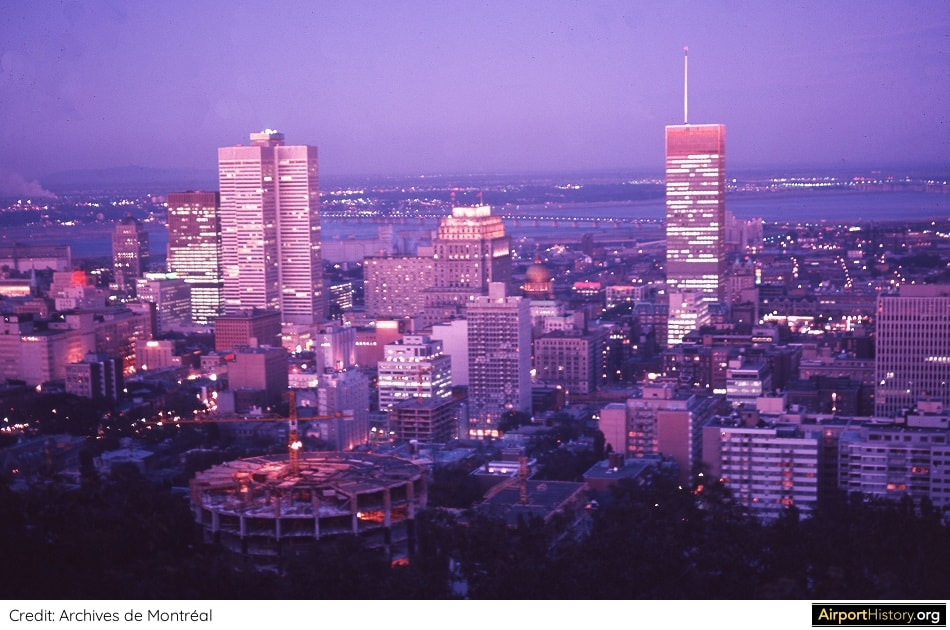 A 1964 view of downtown Montréal taken from Mount Royal.
THE BOOMING 1960s
​
In the 1960s, Montréal was Canada's largest city and the third-largest city in North America after New York and Chicago. It was also Canada's commercial and cultural center. During that era, the city experienced an economic boom and Montréal's city leaders, led at the time by Mayor Jean Drapeau, were thinking big in terms of asserting the city's status as a prestigious, forward-looking metropolis.

​During that decade several of the city's tallest skyscrapers were constructed as well as a city-wide network of expressways and subway lines. The enormous success of the Expo 67 World's Fair held in Montréal was one of that era's crowning achievements. In 1970, Montréal was awarded the 21st Summer Olympics, held in 1976. The city seemed invincible as the epicenter of business and culture for the province of Québec and all of Canada. 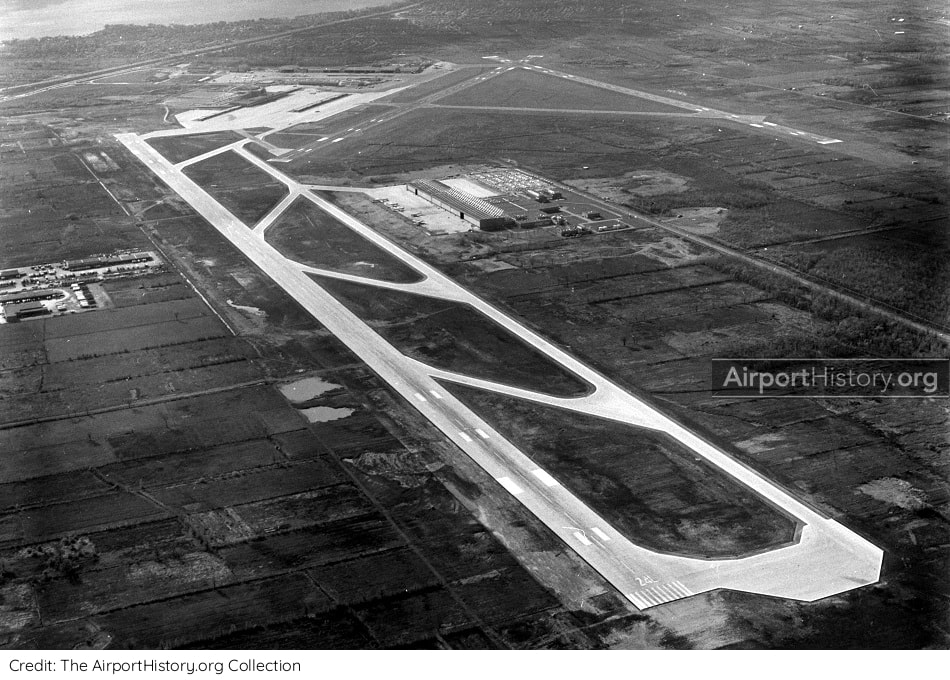 A 1962 aerial of Montréal's Dorval Airport taken from the northeast. In 1960, the airport had been expanded with a brand-new terminal—the largest single terminal building in the world—and a jet-age runway.
THE CASE FOR A NEW AIRPORT

Due to the boom, passenger traffic at the city's international airport at Dorval was growing at double-digit rates. In 1965, Dorval handled 3.3 million passengers, 16.7% more than the previous year. Five years prior, the airport had been expanded with a brand-new terminal complex and a third runway. However, it was clear that planners already needed to consider the next round of expansion.

Another study revealed that Dorval Airport would reach a saturation point by 1975, and that even if it was expanded, it would reach its maximum capacity by 1985. Beyond that, an additional runway would need to be built, which would require the acquisition of very expensive land. 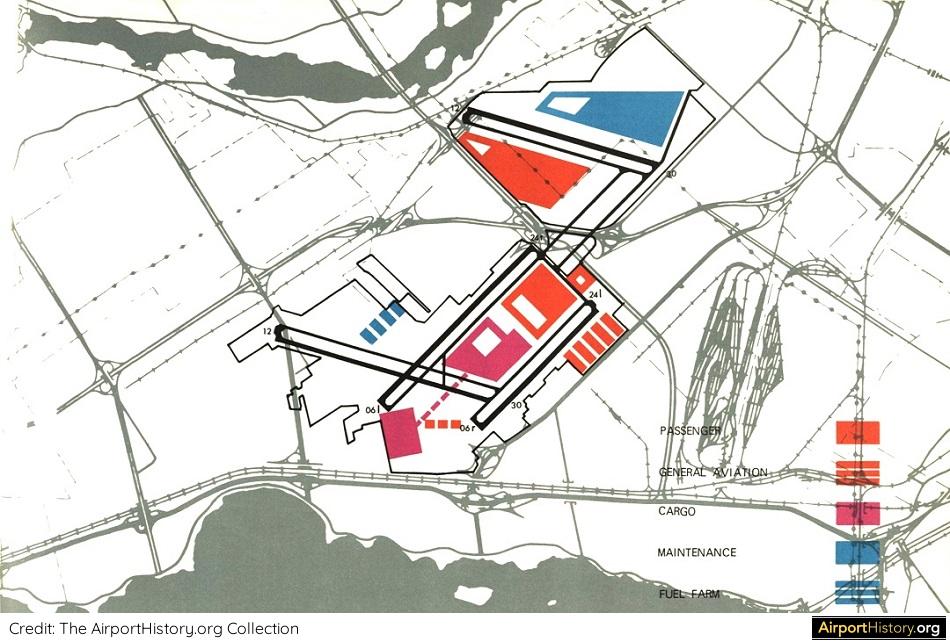 Expansion of Dorval would have included lengthening of diagonal runway 10/28 (here called 12/30). In the longer term, a fourth runway would need to be built on the location of the nearby Cartierville Airport (near top of image) and connecting it to Dorval by means of mile-long taxiways.
​NOISE CONCERNS

Even more critical would be the noise problem that would come with the increased air traffic. In the late 1960s, people living near the airport were already protesting against existing noise levels and demanding action from the federal government.

Restrictions were imposed on night flights at Dorval. This alleviated problems somewhat, but with the growth of traffic and the large-scale introduction of wide-body and supersonic jetliners on the horizon, a long-term solution was needed.

After weighing all the factors involved, the government decided in 1968 that the future aviation needs of the Montréal area could only be met by the construction of a new international airport, one which would be suitable for the new generation of aircraft and the largely unknown demands of the 21st century. 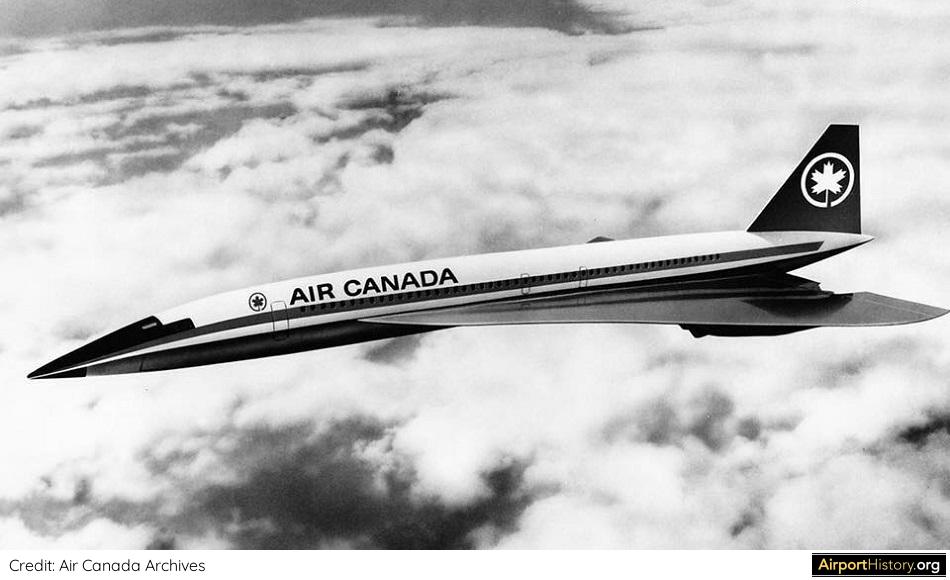 By the summer of 1967, Air Canada had placed orders for four Anglo-French Concordes with delivery in 1973, plus six Boeing SSTs for delivery in 1977. Neither aircraft was ever delivered to Air Canada. The Boeing SST never even flew.

The Canadian Department of Transport studied 20 possible sites for the new airport, which was narrowed down to five. The Montreal International Airport Study came to the conclusion that the airport should be located in Vaudreuil-Dorion, 30 miles (45 km) to the south-west of downtown Montréal, just west of the Island of Montréal.

The site was traversed by existing expressways and railways connecting Montréal to Ottawa and Toronto; thus minimizing necessary investments in landside surface transport connections. In addition, due to its location, it could serve as the gateway to both Ottawa and Montréal. ​​Lastly, due to its proximity to the existing airport of Dorval, airport workers would not have to move in order to keep their jobs.
GALLERY: POTENTIAL LOCATIONS (CLICK TO ENLARGE) 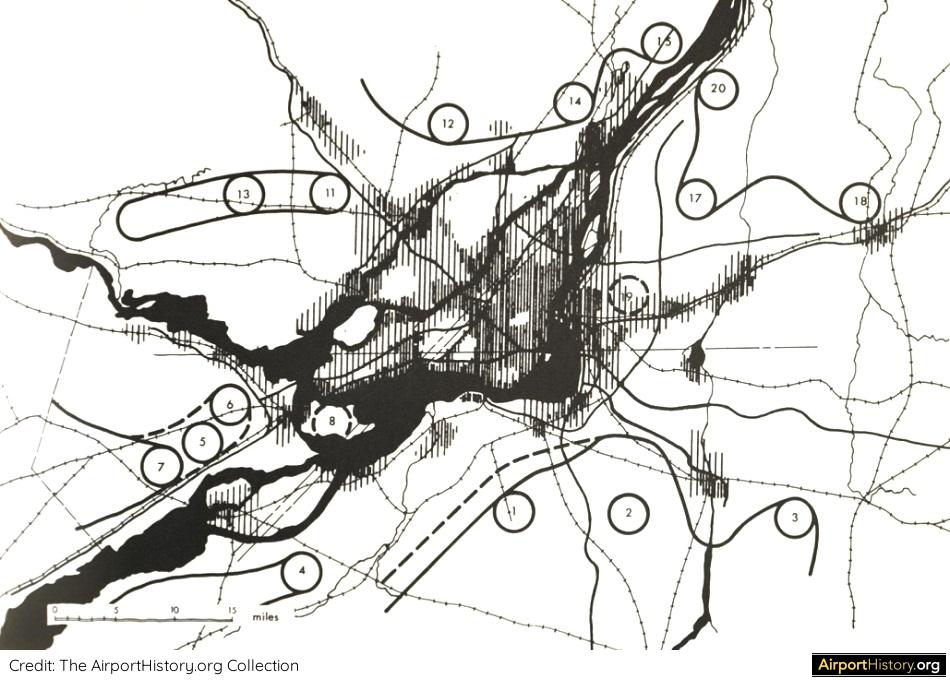 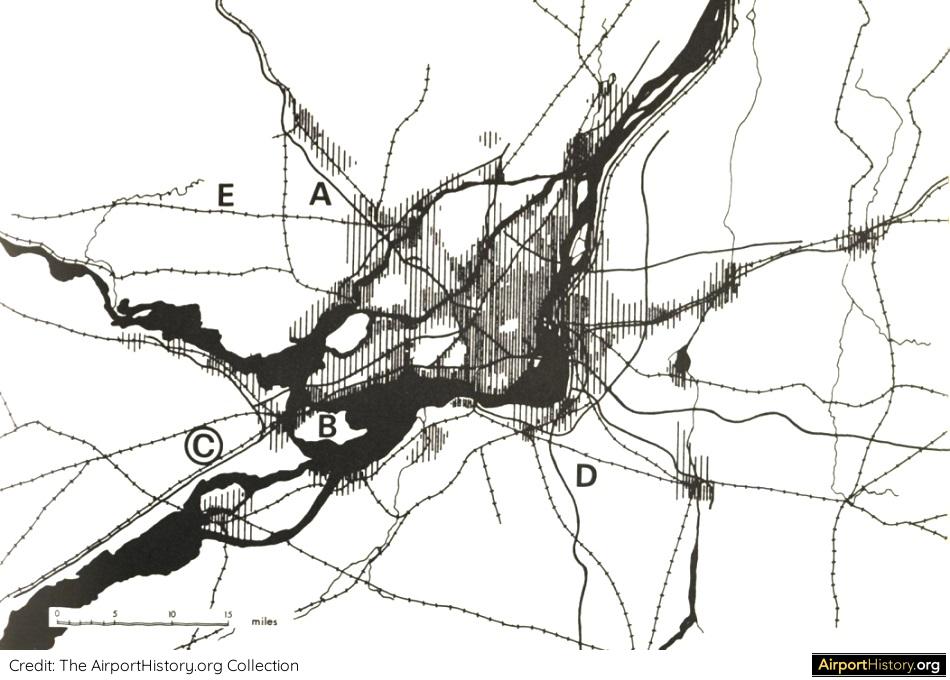 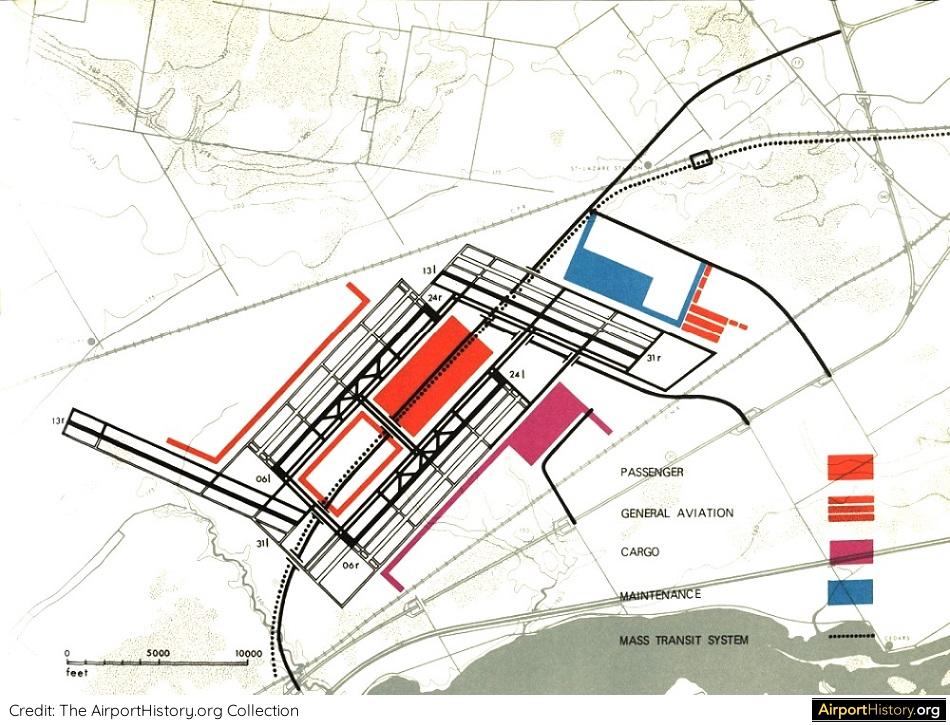 However, the provincial Québec government found this location to be too close to the Ontario border. It feared that airport workers might move to lower-taxed Ontario. Québec nationalist sentiments reportedly also played a role.

Instead, it preferred that the new airport be situated near Drummondville, 70 miles (110 km) to the east of Montréal. Drummondville is located halfway between both Montréal and the provincial capital Québec City, thus allowing the airport to serve as an international gateway to both cities.
​Mirabel did not score badly in the report. However, it had one major issue: a lack of surface transport connections. Only one major road, Route 15, ran through the area. The report strongly recommended that a second expressway be built in time for the opening of Mirabel, and a third one by 1985. Also, an airport rail connection to downtown would have to be built as soon as possible.

The largest airport in the world

Montréal was located right on the hinge-point of the world's two fastest growing aviation markets: the US domestic and transatlantic market. Montréal was the first major city on the way from Europe to the US east coast and midwest.  Thus, Mirabel was poised to develop into the primary hub connecting European capitals with cities in Canada and the US.

Due to its location, Montréal also was a convenient transit point for the early jets, which had limited range. European carriers such as KLM and Air France used Montréal as a stopover point on their way to Chicago, New York or Houston. Lastly, bilateral treaties of the time dictated that most European flag carriers wishing to fly to Canada could only serve Montréal.

Planners also envisaged a big future for cargo. At the time, Montréal was an up-and-coming freight center. It was hoped that a brand-new airport offering state-of-the-art facilities could siphon off large amounts of cargo traffic from overcrowded nearby centers like Boston and New York. 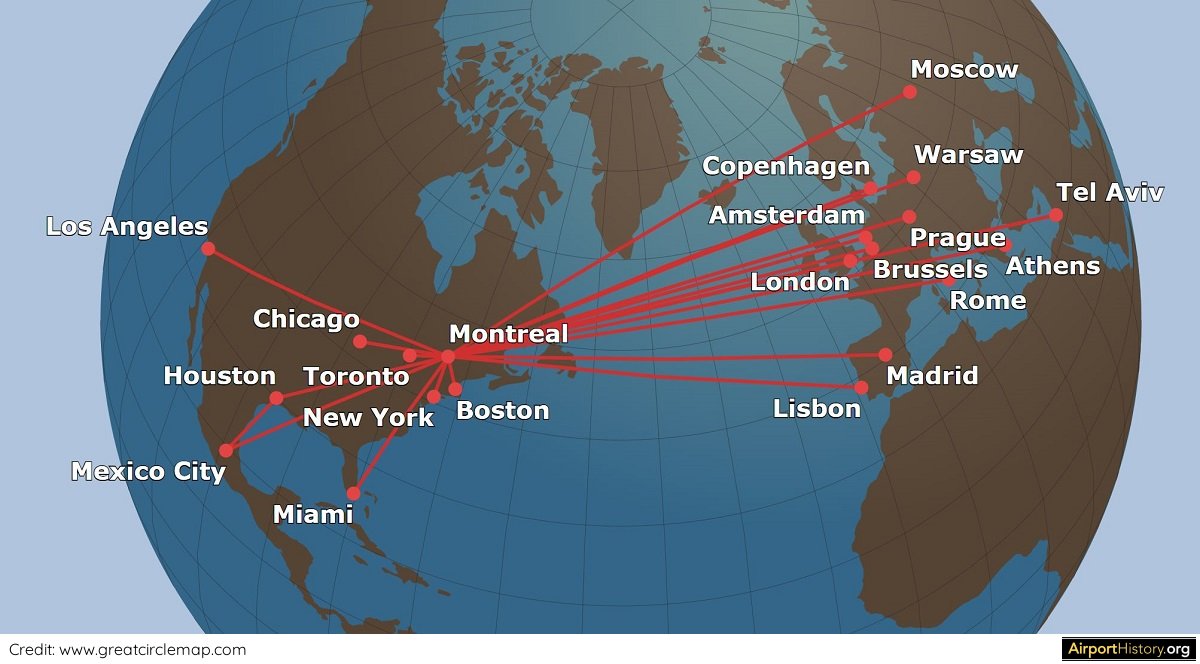 Some of the main routes operated out of Montréal in the early 1970s. The city's geographic advantage is apparent from this view.
​THE DESIGN CHALLENGE
​
Considering the expected growth, planners were looking for an airport layout with near infinite capacity and where they could incorporate the latest design concepts. At the time, the trend in airport construction was to minimize walking distances and to drop off passengers as close to the door of the aircraft as possible.

The new generation of wide-body aircraft had to be brought close to the terminal so as to efficiently load passengers and cargo, but also needed plenty of space to maneuver because of their size. Also, enough land would need to be protected for future development and to prevent noise concerns.

For inspiration they looked at the giant new jetport proposed at the time for the cities of Dallas and Fort Worth, Texas.
That airport incorporated the concept of a center spine road, which brings a main artery for surface transport right down the middle of the airport. ​Rather than one large passenger terminal, a number of decentralized terminals were arranged around the spine road. Each terminal was to be operated by a major airline or a number of smaller ones. 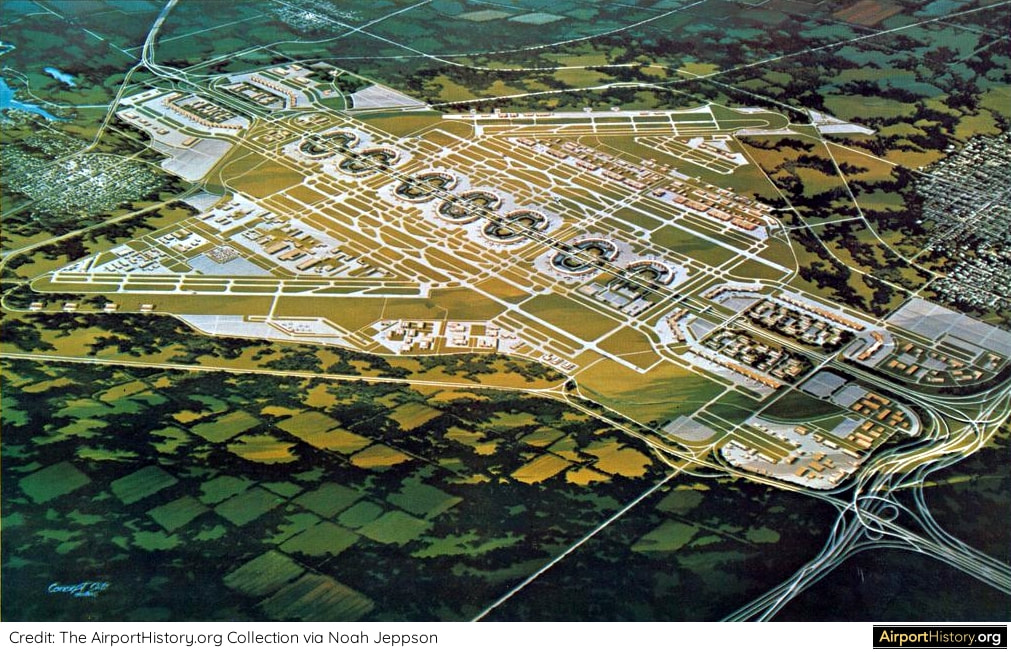 The Master Plan of Dallas/Fort Worth Regional Airport. The airport was one of the first to introduce the concept of a spine road bisecting the airport, along which terminals and other facilities were arranged.
THE MIRABEL MASTER PLAN

The Mirabel Master Plan envisaged an airport of 17,000 acres (6,879 hectares), slightly smaller than the size of Dallas/Fort Worth Airport.

​The plan provided for a total of six runways, which were arranged in three pairs of parallel runways: two pairs in the direction of the predominant winds (northeast-southwest) and one pair in the crosswind (east-west) direction. Together these provided a capacity of more than 160 landings and takeoffs per hour, or 630,000 movements per year.

There was also provision for a seventh landing strip of 2,000 feet (610 meters) for so-called STOL (Short Take Off and Landing) aircraft that could transport passengers to nearby cities like Ottawa, Toronto and even downtown Montréal, if the roads would ever become too congested. 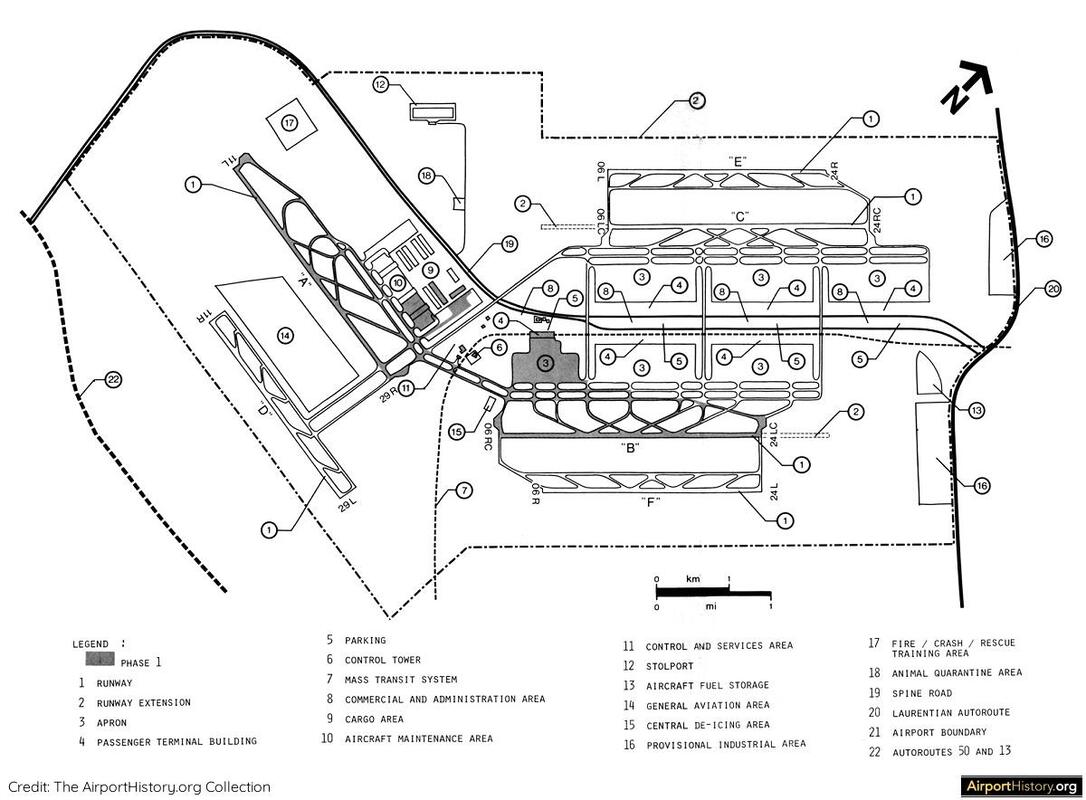 The Mirabel Master Plan. The Phase One facilities are indicated in dark grey.
​The plan provided for the construction of a total of six passenger terminals. Similar to the DFW plan, the terminals would be arranged on both sides of a four-lane spine road, which would bisect the airport.

The spine road could be widened to eight lanes. A reservation was made in the median for an automated people mover (APM) system, connecting the passenger terminals. There were also provisions for extensive cargo and aircraft maintenance areas, a STOL-port, a general aviation area and an airport industrial park.

​The most controversial part of scheme was the establishment of a huge buffer zone around the airport which was meant to provide a defense against noise and safeguard the airport’s future development. Most of the land would be dedicated to agriculture. Another section would be used to establish an airport industrial zone.
​CONNECTIONS TO THE CITY

With the airport being located relatively far from Montréal, and only one expressway—Route 15—running through the area, improving surface access was of utmost importance.

Several new expressways were planned: the most important one being the extension of Route 13, which would connect Mirabel to the existing airport at Dorval and Montréal’s prosperous west. Later on, a third expressway connecting Montréal to the airport—Route 19—would be constructed.

Eventually, the new Route 50 would connect the airport to Ottawa, some 90 miles (150 kilometers) away, thereby making Mirabel a viable alternative for inhabitants of Canada's capital.
GALLERY: SURFACE TRANSPORTATION (CLICK TO ENLARGE) 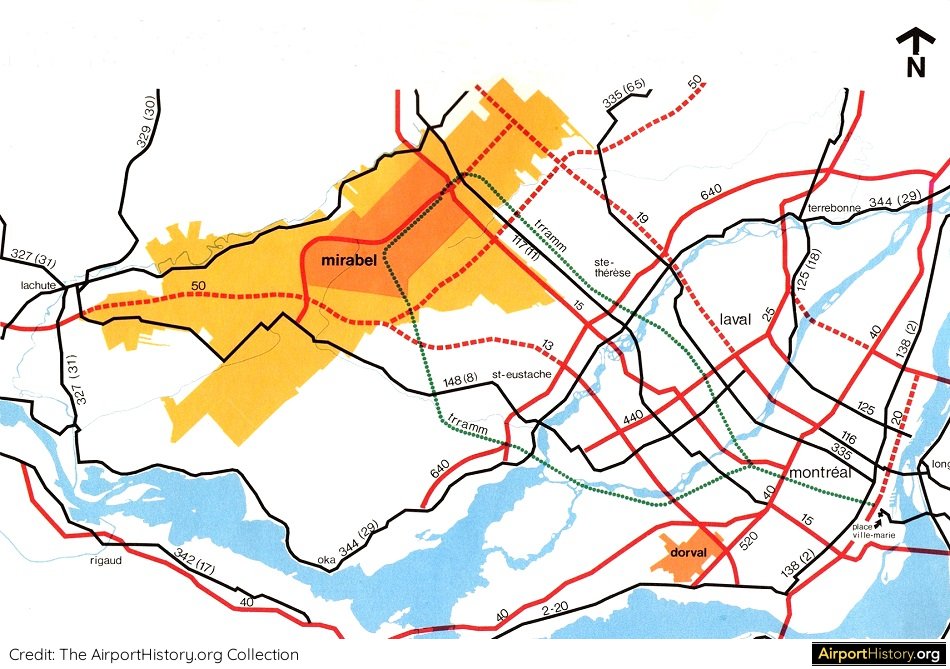 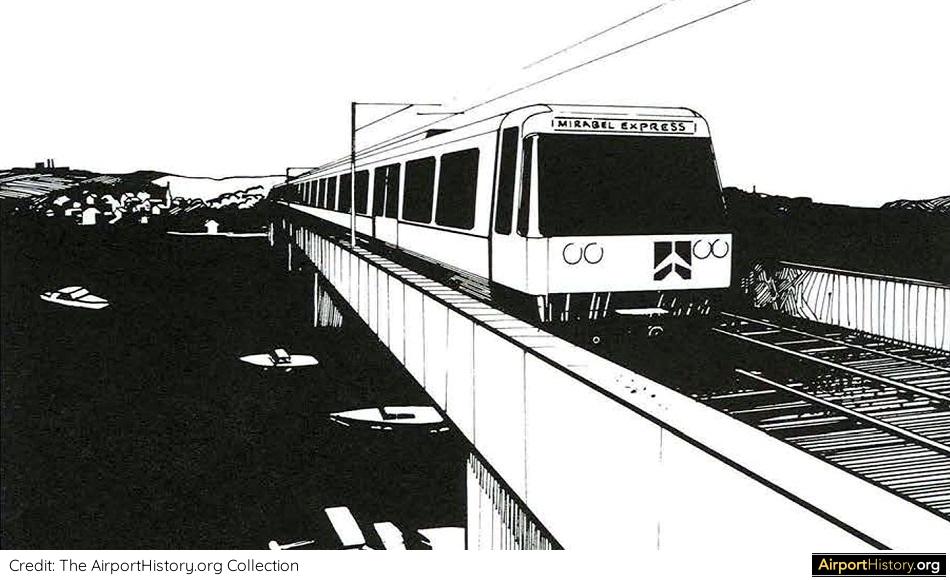 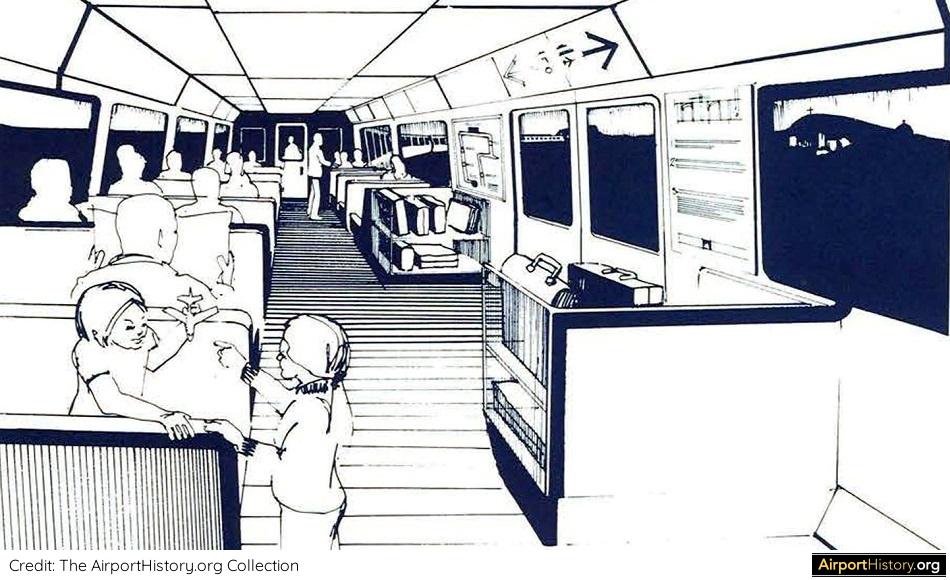 Even with improved highways, during rush hour, the driving time from Montréal to Mirabel would still be an hour. Hence, it was of paramount importance to develop a rail alternative. To address this need, a high-speed light rail from downtown Montréal to Mirabel was planned, called TRRAMM (Transport Rapide Régional Aéroportuaire Montréal-Mirabel).

Trains were able to reach speeds of up to a 100 miles per hour (160 km per hour) and would cover the distance between Montréal and Mirabel in 30 minutes. TRRAMM was to be completed by 1980 and would eventually be expanded to other parts of the Montréal region.
Want to hear what happened next? We will soon upload Part 2, where we will explore the design of the passenger terminal and other facilities!
Click here for more airport articles

​​- Follow us on social to get the best of airport history right in your news feed!