Photo Special:
The KLM 747 at Schiphol - The Early Years 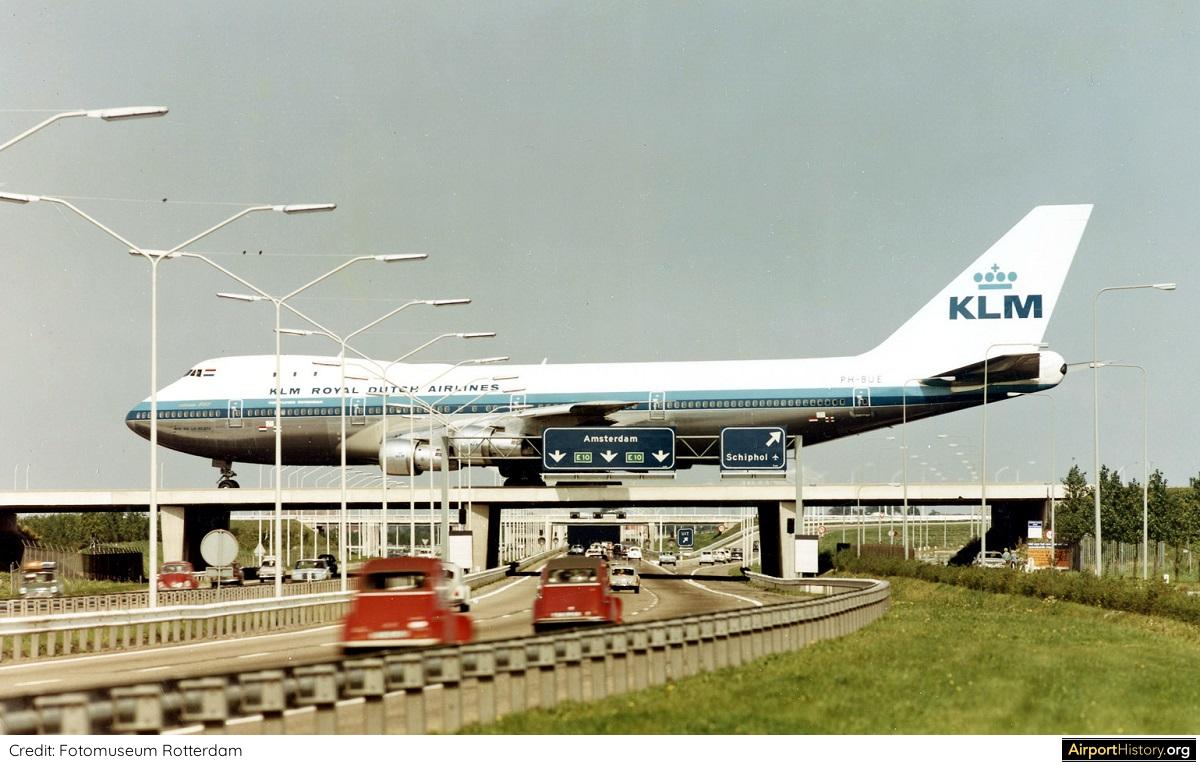 The end of an era

Due to the coronavirus and the resulting dramatic collapse of passenger demand, KLM Royal Dutch Airlines has decided to speed up the retirement of the of the last passenger and combi versions of the Boeing 747. Yours truly feels very sad to see the 747 leave the KLM fleet, as many of my happiest aviation memories are tied to it!

Therefore, we here at AirportHistory.org want to pay tribute to this legendary aircraft--Queen of the Skies--operating for this iconic carrier. As this site is all about airports, we will show some great images of KLM 747s at their home base of Amsterdam Schiphol, whose success and growth was inextricably intertwined with the aircraft over several decades.

In the modern era, an army of amateur photographers has documented virtually every movement of every KLM 747 at Schiphol. Thus, for this photo special, we will focus on the first 20 years (1971-1991), a period from which images are quite rare. 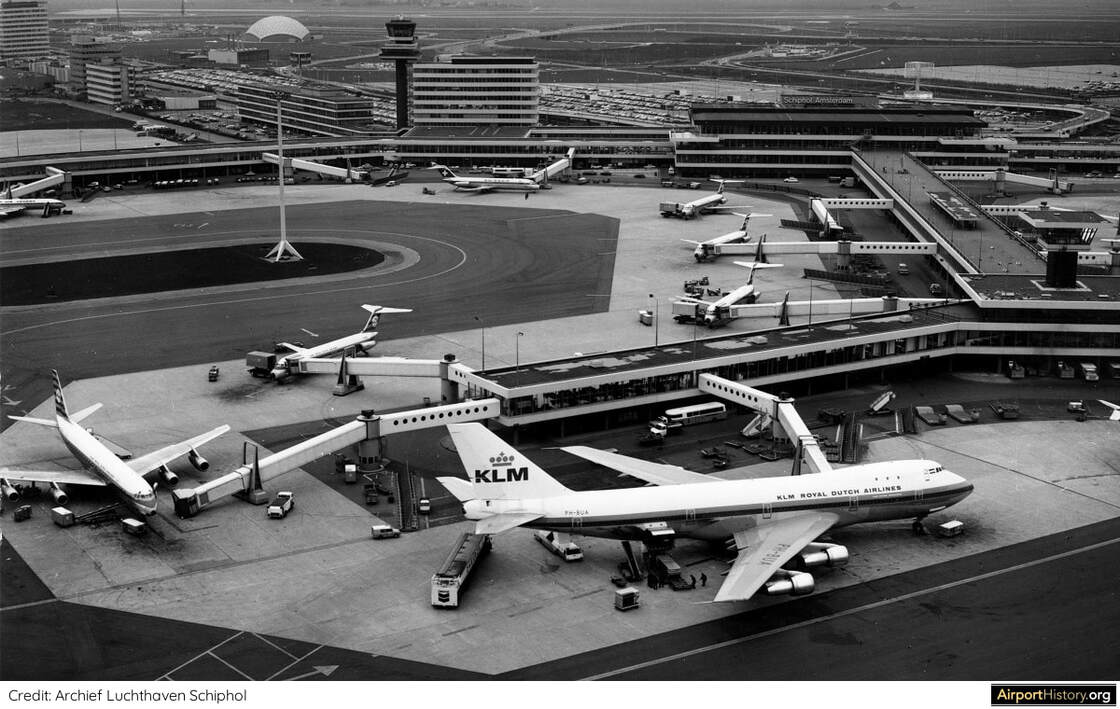 KLM's first Boeing 747-206B (PH-BUA "Mississippi") is parked at Gate B30 (now D Pier). KLM first introduced the 747 in February 1971 on the Amsterdam-New York route. Although the expanded Schiphol (1967) was a state-of-the-art facility, it was designed before Boeing announced the 747. The holding lounges and luggage belts were not designed to accommodate several hundred passengers simultaneously. Luckily, the plan provided for plenty of room for expansion. 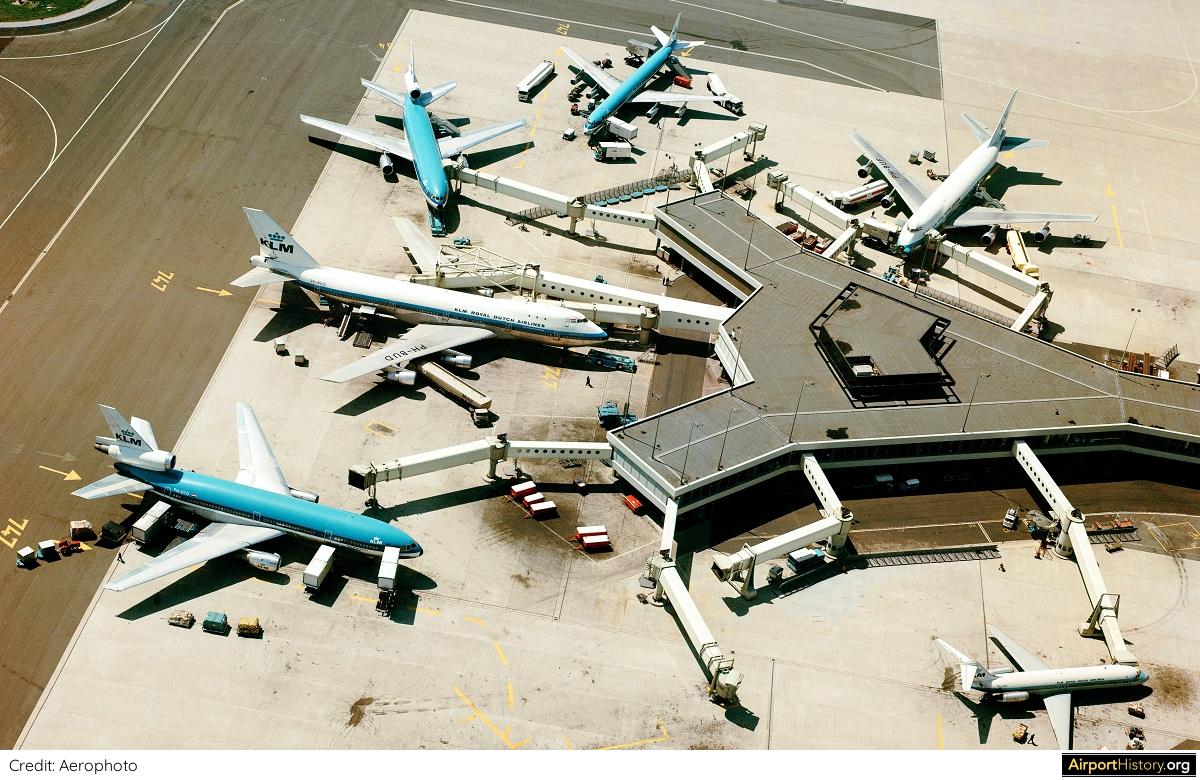 In April 1971, a 125-meter extension of the C Pier opened, which could handle several wide-body aircraft at once. The extension provided five holding lounges, each able to accommodate 400 passengers. The extension introduced the world's first over-the-wing boarding bridge, produced by Dutch company Aviobridge, as you'll see above. The extension also introduced the concept of nose-in parking at Schiphol Airport. 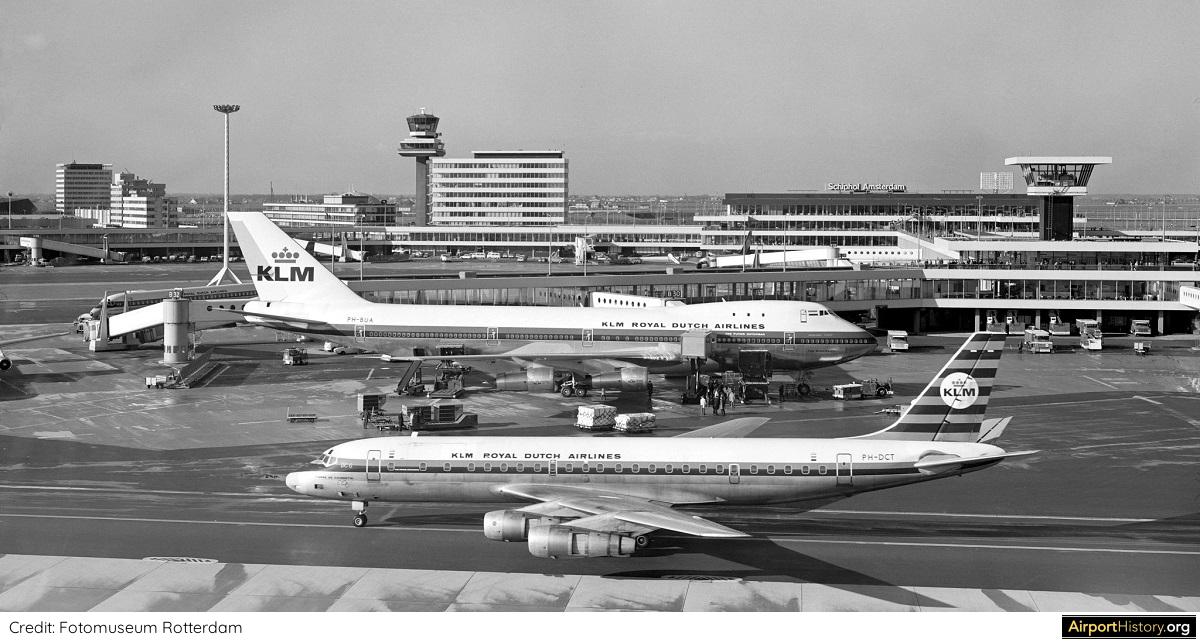 KLM built a special maintenance hangar, Hangar 11, for the maintenance of Boeing 747s and DC-10s. The hangar, called "Jan Dellaert", Schiphol's first Director and the visionary behind the modern Schiphol, can handle three 747s simultaneously. 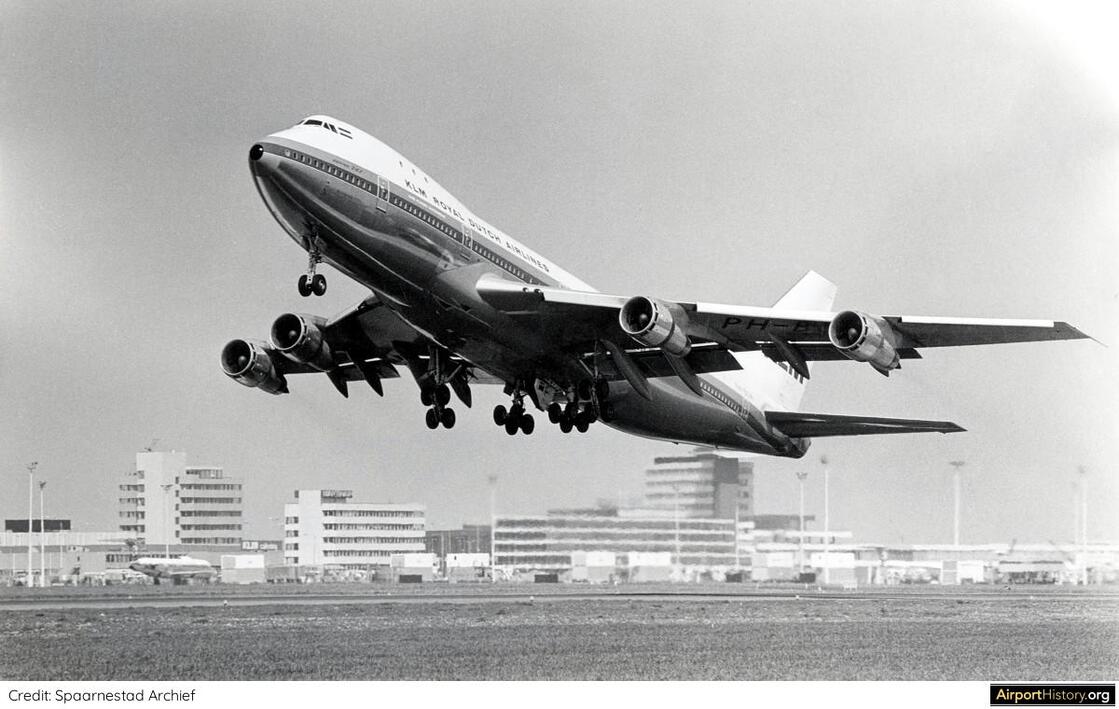 PH-BUA "Mississipi" takes off from runway 06/24 in 1971. There are plenty of color images around from that time but I just love the classic look of black and white images.

A fantastic 1973 image of PH-BUC named "The Amazon" being serviced at the gate, while a Douglas DC-10 taxies by. DC-10s started joining the fleet in December 1972 and were delivered in the characteristic blue livery that most people associate with KLM. The KLM 747s were repainted in the period between 1974 and 1977. 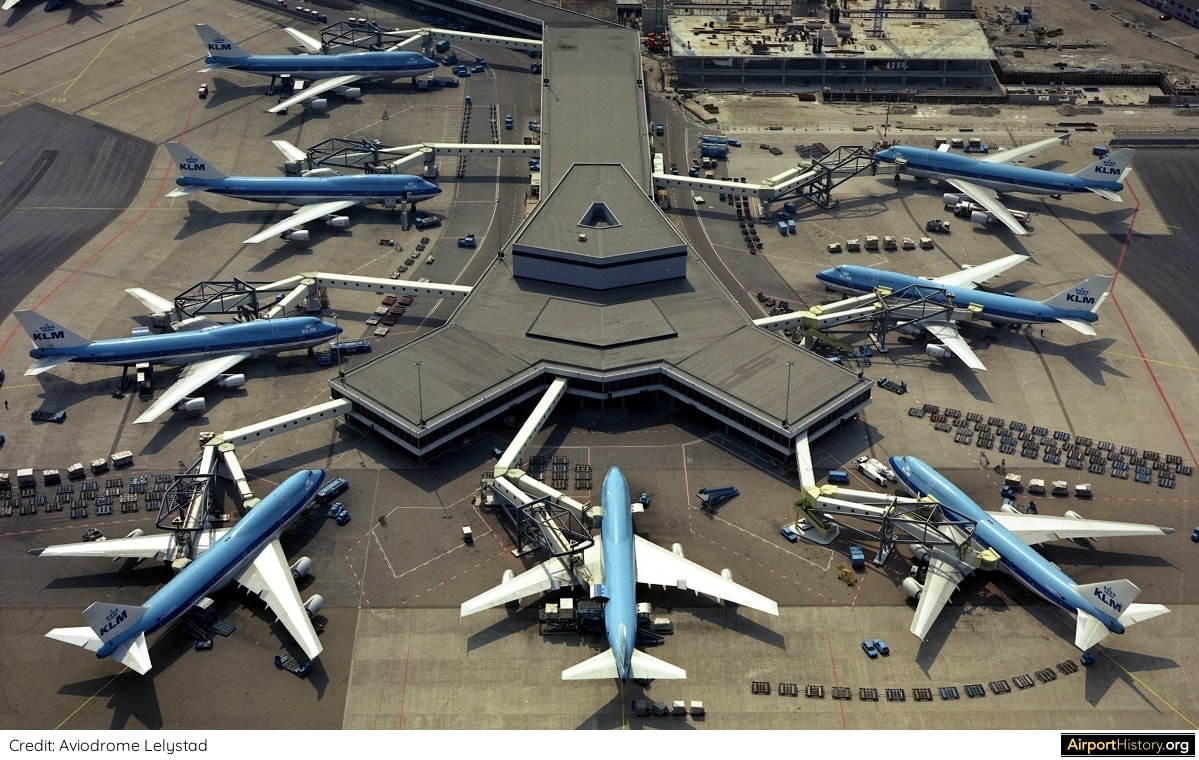 An aerial image of the F Pier ca. 1991, at the absolute height of the 747 era. A mix of 747 classics and 400s is parked at the F Pier. Construction of what was then called "Terminal West" and the associated Pier G is still in progress above.

We hope you liked our little tribute to the KLM 747.  The 747 is not gone quite yet. KLM 747 freighters will continue to fly the skies for years to come. Most importantly, we will always have our memories of the aircraft...and of course, great images!

We recently wrote an article on Schiphol's infamous runway in the middle of nowhere, the "Polderbaan". You can read that here. Stay tuned as we will be launching a full history of Schiphol Airport soon.
​
Check out our articles about other airports here.

​Did you fly in KLM's 747 in the early years? Leave a comment below and share your memories!

A special thanks to Ronald Dijkstra, retired KLM 747 captain and fellow aviation historian, for his help in dating some of the images. Ronald was involved in a great book about KLM's 747 classics and is currently working on a book on the KLM 747-400. For more information on both books, follow this link.