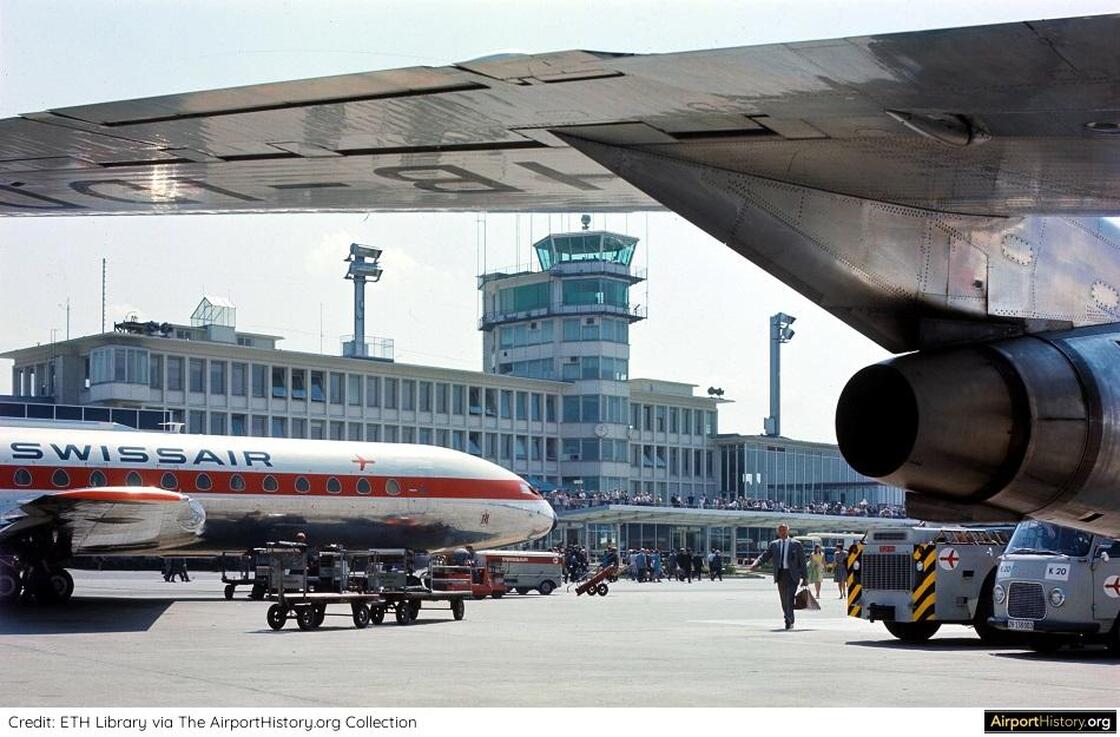 Zürich Airport, also known as Kloten Airport, is the largest international airport in Switzerland and the principal hub of Swiss International Air Lines, the successor of Swissair, which went bankrupt in 2002.

Since its opening in 1948, Kloten Airport has developed into one of the most convenient hub airports of Europe. In Part 1 of this two-part photo special, we'll take you on a tour through the airport's development through the decades.

​All images originate from the Swissair Image Archive unless otherwise noted.

Before Zürich Kloten Airport opened in 1948, the main airport for Zürich was located at Dübendorf Airfield, 4.66 miles (7.5 kilometers) north-east of Zürich.

The area had previously been a marsh and improvement of the terrain started in the summer of 1910. On 22 October 1910 the first airshow was held at the airfield, and in 1914, the Swiss Air Force started using Dübendorf as an air base.

​Finally, in 1919 Dübendorf became an airport for civil airlines, first for the predecessor of  Swissair, called Ad Astra Aero, and from 1932 onward for Swissair. It was also in that year that a dedicated passenger terminal building was opened. 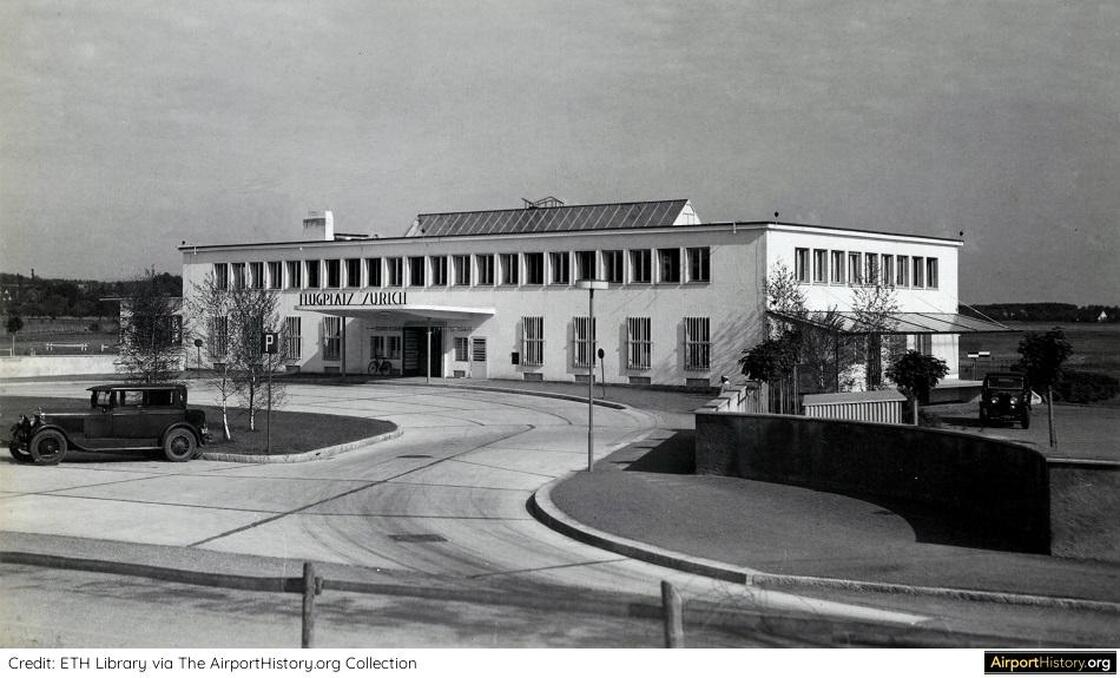 An exterior view of the Dübendorf passenger terminal, likely taken in 1932. 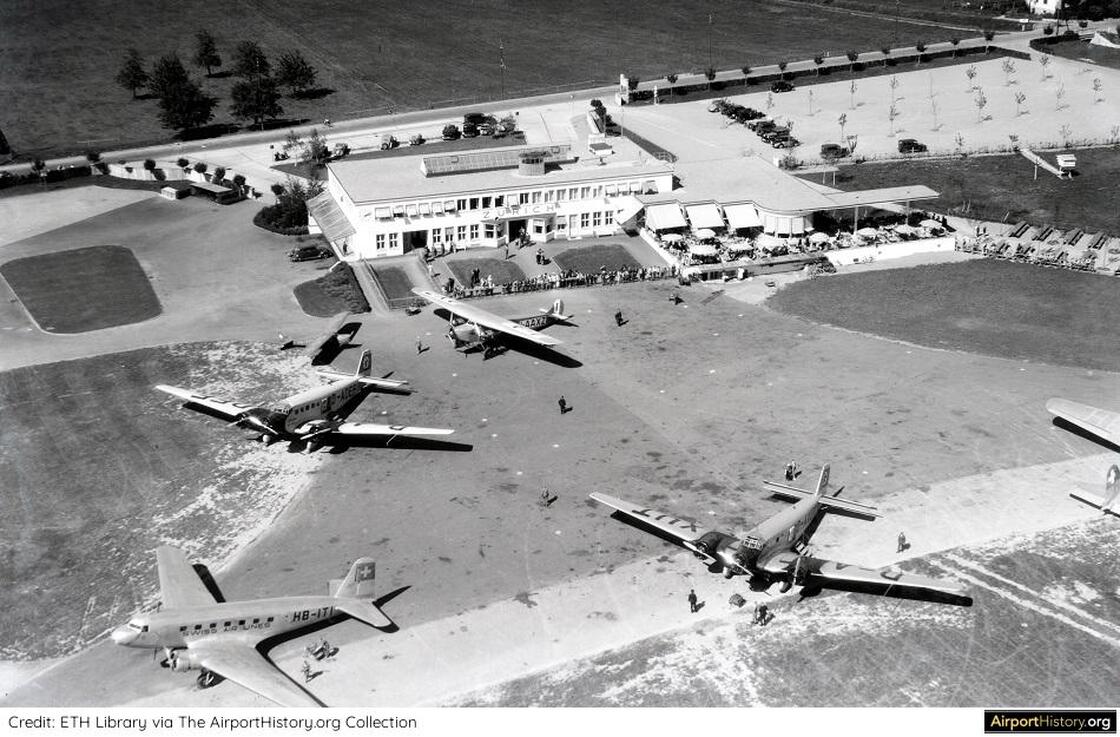 An aerial of Dübendorf, taken on 3 September 1939. Visitors include two Lufthansa Junkers Ju-52, carrying the Nazi swastika symbol on the tail. WWII had just started two days prior. Switzerland was able to remain independent through a combination of military deterrence, economic concessions to Germany and good fortune, as larger events during the war delayed an invasion. ​Note the large terrace to the right of the terminal.

With aircraft becoming faster and heavier, there became a requirement for longer runways. Dübendorf could not be expanded without affecting large areas of valuable cultural and historic landscape. Hence, in April 1943, the Zürich administration commissioned a feasibility study for a major airport in the vicinity of the city.

A site was chosen near the village of Kloten, about 6 miles (9 km) northeast of the city. The citizens of Zürich Canton approved a credit of CHF 36.8 million for its construction on 5 May 1946 and work on the project began in July of that year. 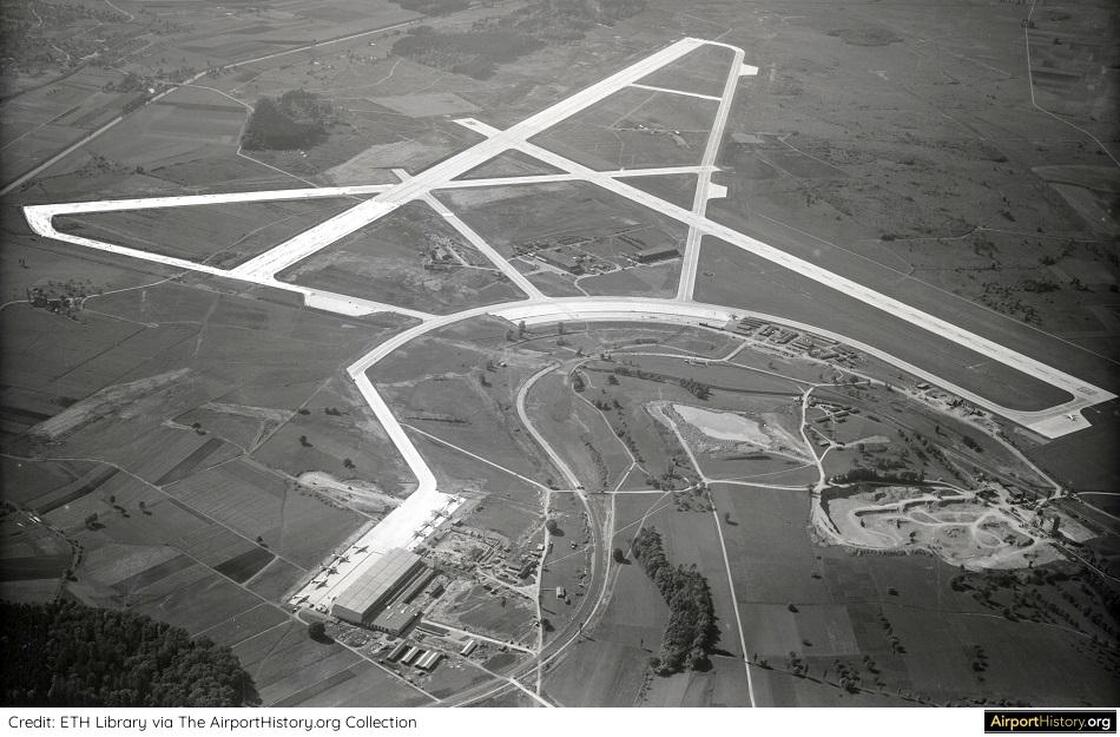 A June 1950 image of Kloten Airport looking west. The 6,234-foot (1,900-meter) West Runway (running from middle top to lower right) opened on 14 June 1948. In November of the same year, the 8,530-foot (2,600-meter) instrument runway (running from lower left to upper right) was opened, whereupon all commercial traffic was transferred from Dübendorf to Kloten. The instrument runway was one of longest in Europe at the time. The third 5,036-foot (1,535-meter) runway was used with rare wind conditions only. This aerial image looking toward the west was taken in June 1950. 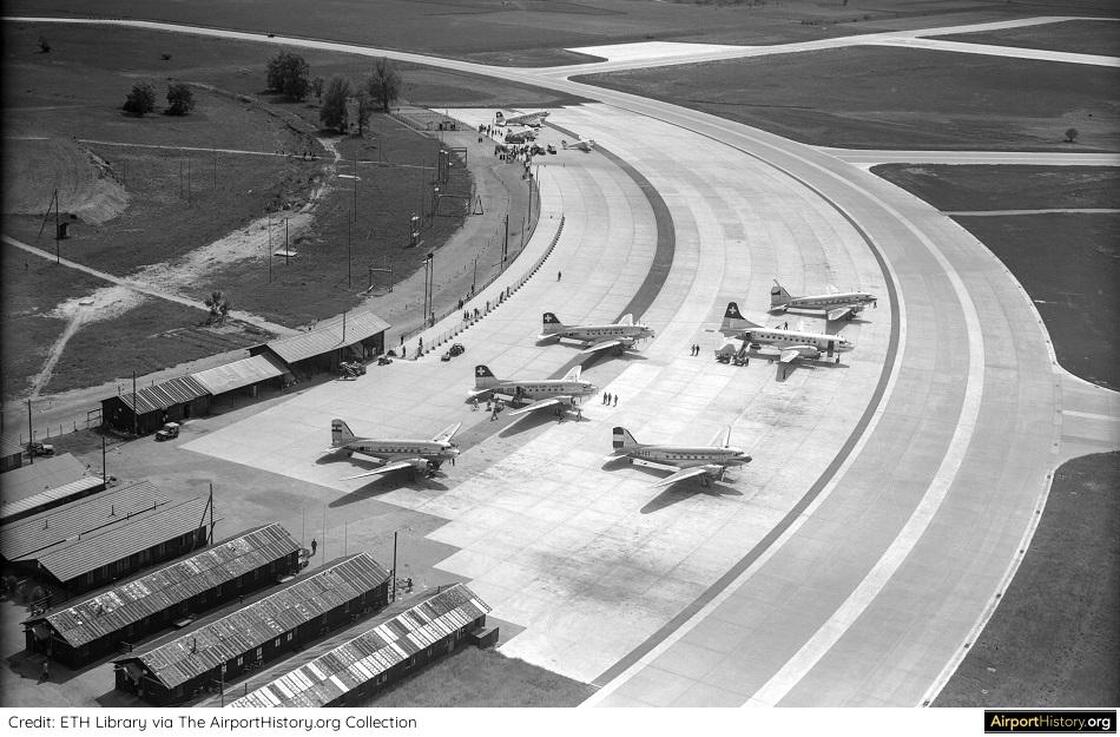 An aerial view of the platform of the brand new airport taken in May 1950. Initially a village of wooden barracks served as terminals. A permanent terminal building still had to be built. In 1949, its first full year of operation, the airport handled 176,412 passengers and 1,819 tonnes of cargo. The planners made an interesting choice for a curved platform, a layout that would influence the development of the airport for decades to come. 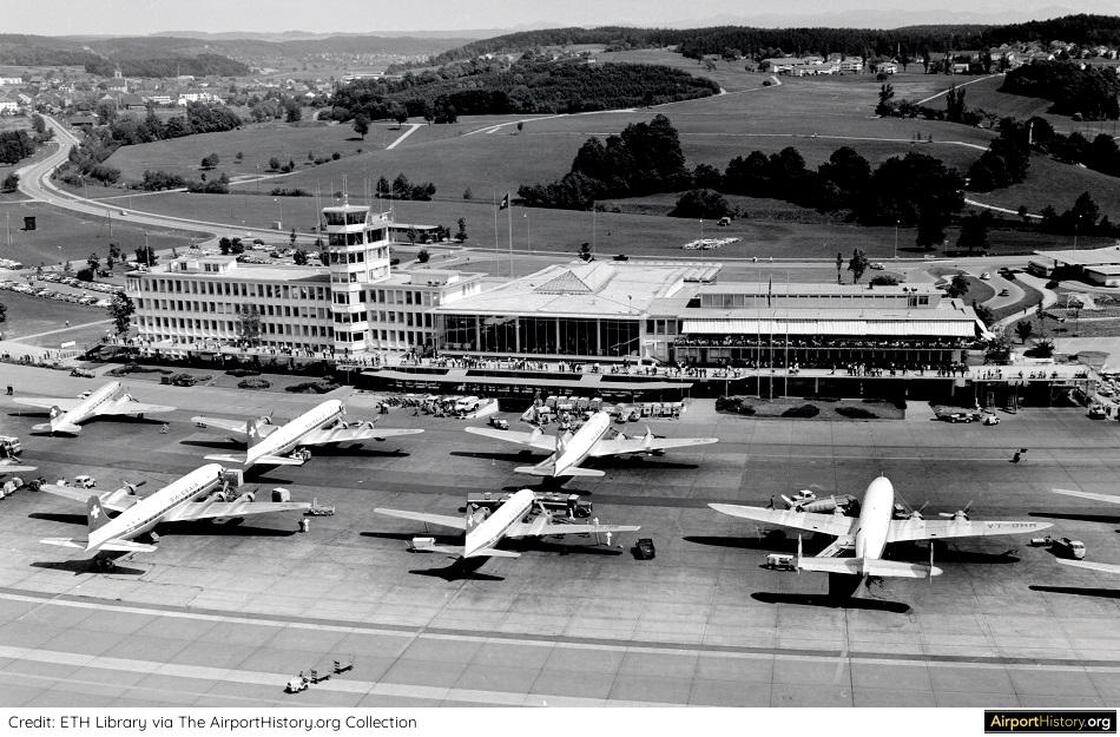 A mid-1950s aerial of the new terminal building, called 'Flughof' which translates as 'Flightyard'. The main hall is located in the middle. To the left is the administration building, which is surmounted by the 95-foot (29-meter) control tower. The building to the right contains restaurants and waiting lounges. Kloten Airport was officially inaugurated on 29 August 1953. The village of Kloten, after which the airport is named, is visible at the top left of the image. 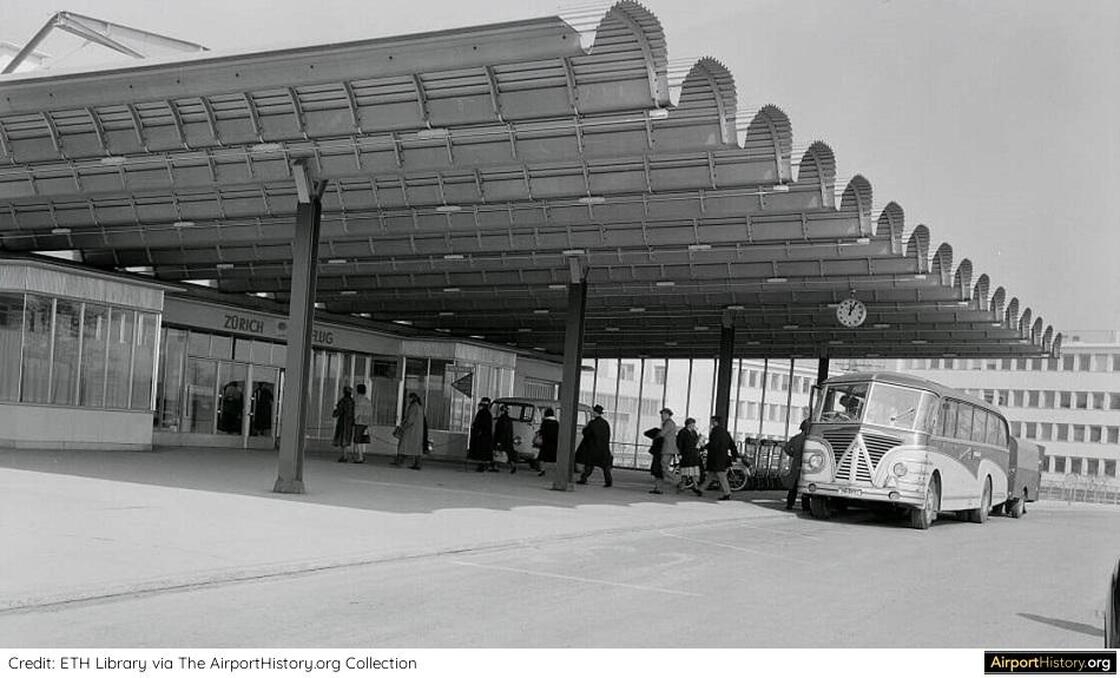 A view of the departure kerb of the passenger terminal. 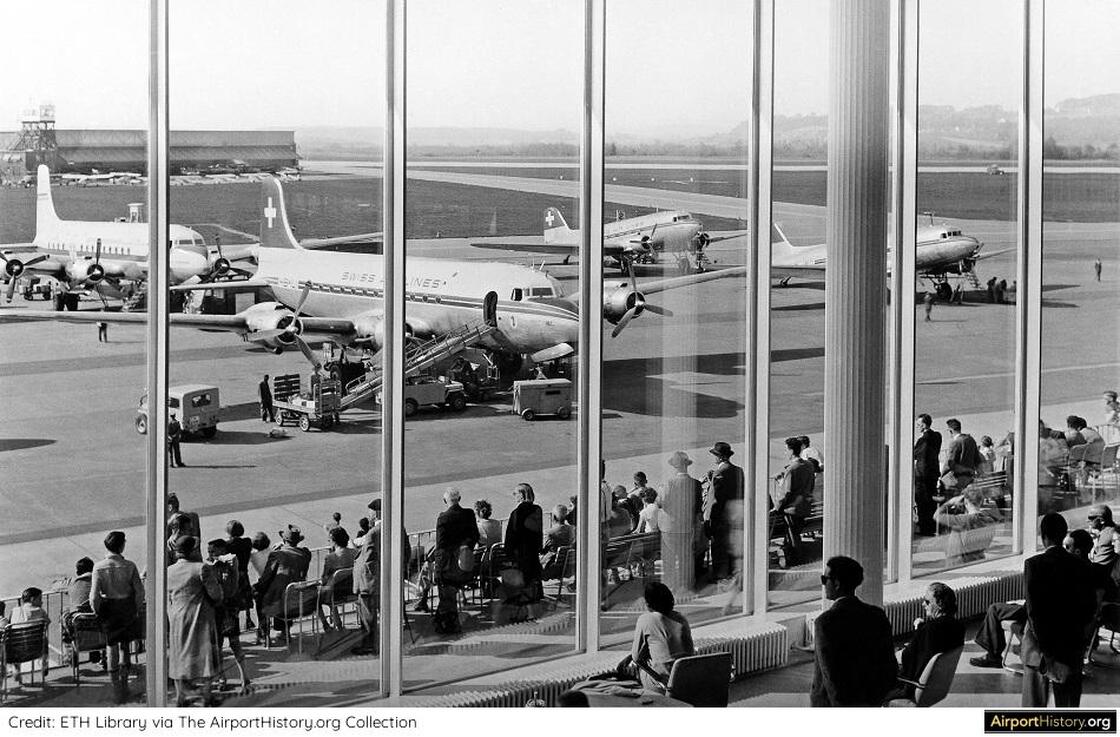 The most impressive feature of the new terminal building was a huge expanse of windows in the main passenger hall allowing passengers to have an unobstructed view of the apron. Running along the face of the whole building was an open spectator's terrace which stretched for a distance of 600 feet (183 meters). The terminal took its inspiration from Washington's National Airport. ​Credit: ​Zürich Airport 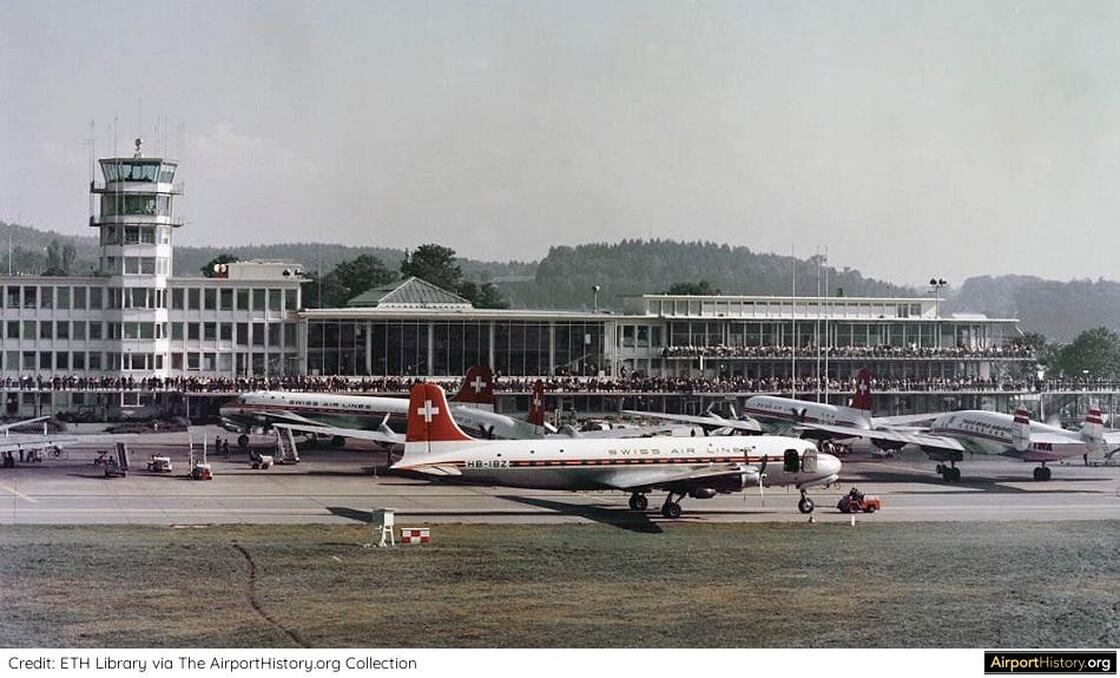 This November 1954 image shows a Swissair DC-6 being towed across the apron. Also visible is a TWA Lockheed Constellation. Look at the amount of people on the viewing terraces! In 1954, Zürich handled 498,170 passenger, a growth of 19.4% over the previous year. 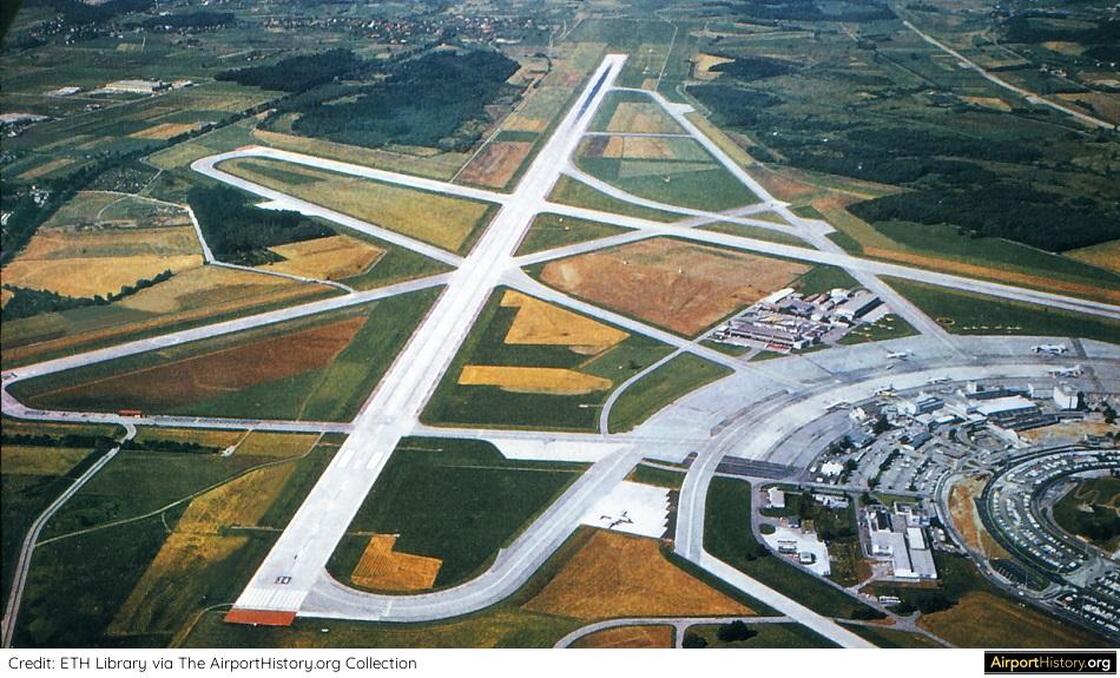 A late 1960s aerial of Kloten looking toward the north-west. In order to cope with jets, the main instrument runway (running from top to bottom of image) was lengthened to over 12,000 feet (3,700 meters) and a high-speed taxiway was added. The West Runway (running from top-left to middle-right) was lengthened to 8,200 feet (2,500 meters). The extensions were completed in early 1961. Credit: AirportHistory.org 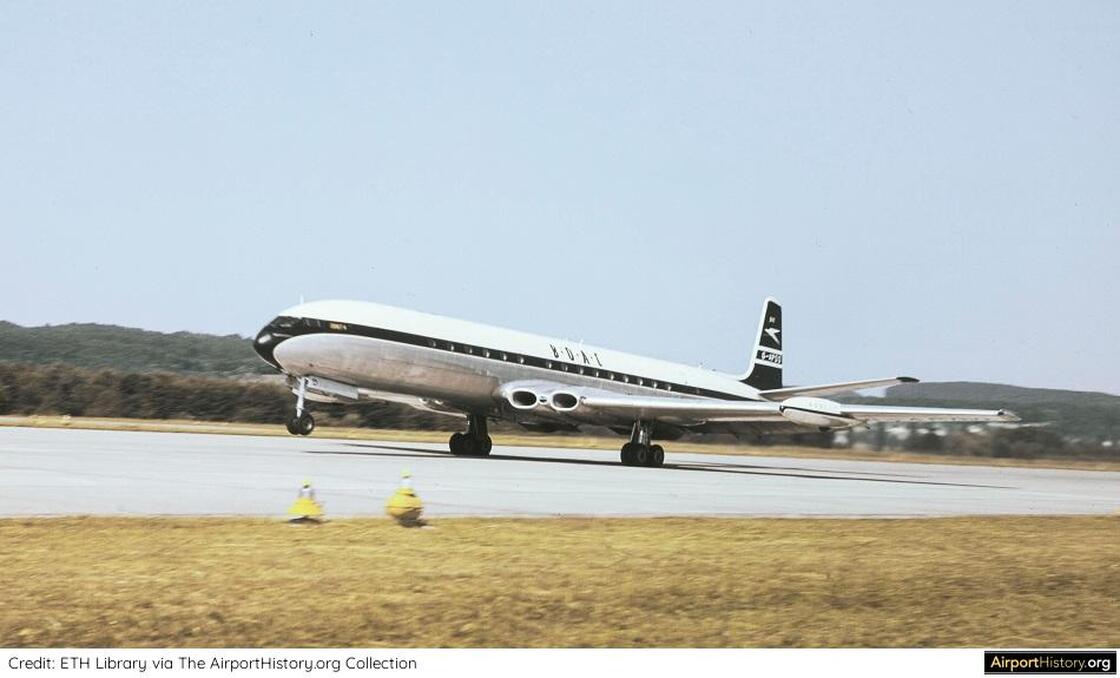 BOAC Comets were the first jets to regularly visit Kloten from 1959 onward. Here's a BOAC Comet taking off from one of Kloten's runways in July 1964. 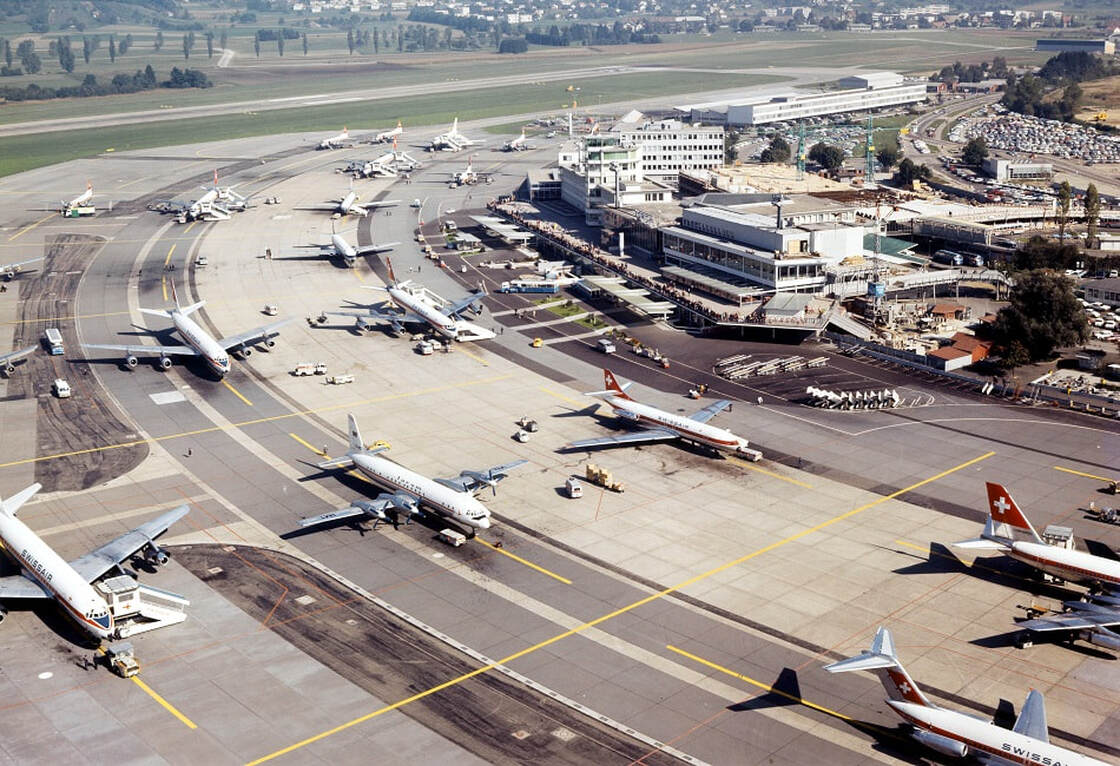 An October 1967 aerial view of the apron and terminal. The transition from the turboprop to the jet era is clearly visible, with a Tarom Ilyushin Il-18 turboprop being surrounded by Swissair Caravelles, Coronados, DC-8s and DC-9s. In 1967, Zürich handled just over 3 million passengers. Note the extension to the terminal under construction. 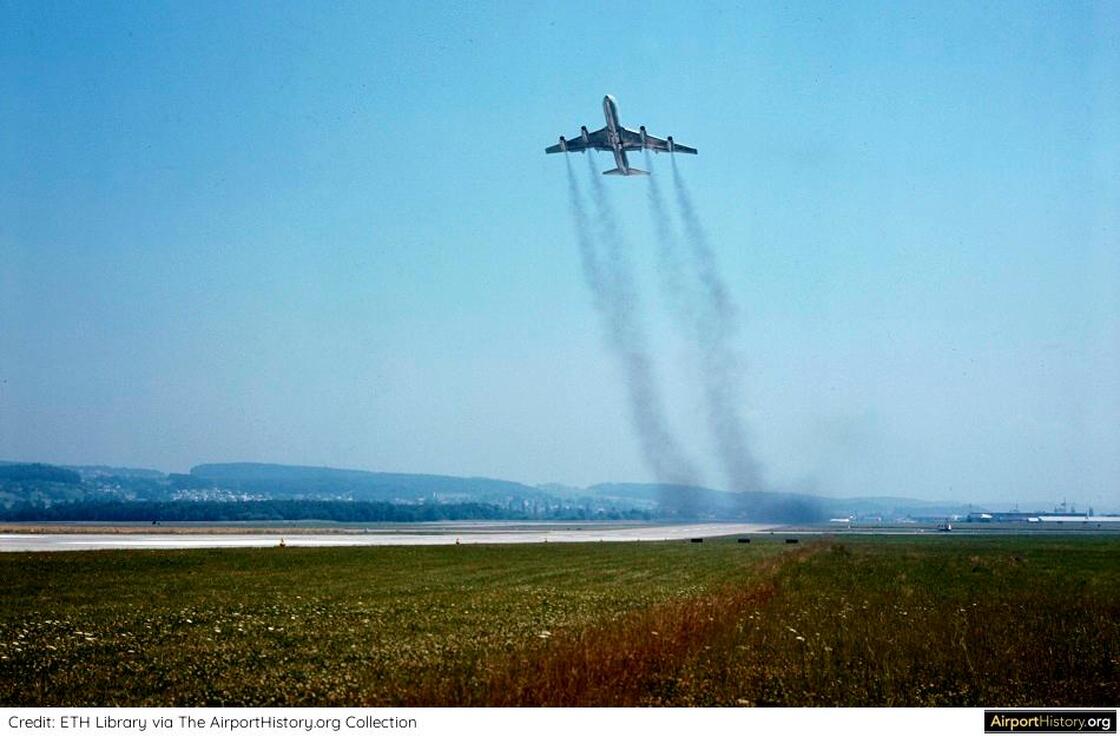 An undated view of a Swissair Convair CV-990-30A taking off from runway 28 on a beautiful day. Swissair operated a fleet of eight aircraft of the type between 1962 and 1975. Look at the smoke! How much more early Jet Age can it get?! 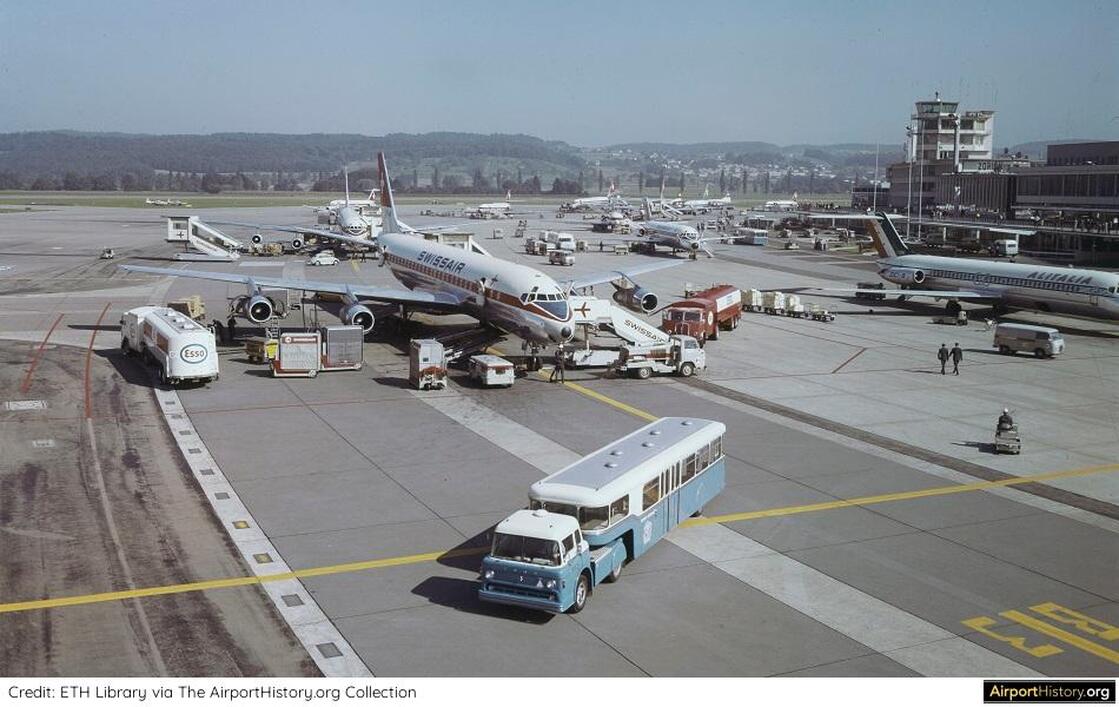 An October 1968 apron image showing a Swissair DC-8 being readied for another flight. At this time, passengers still boarded the aircraft by means of stairs. Boarding bridges would only appear at Kloten well into the 1970s. 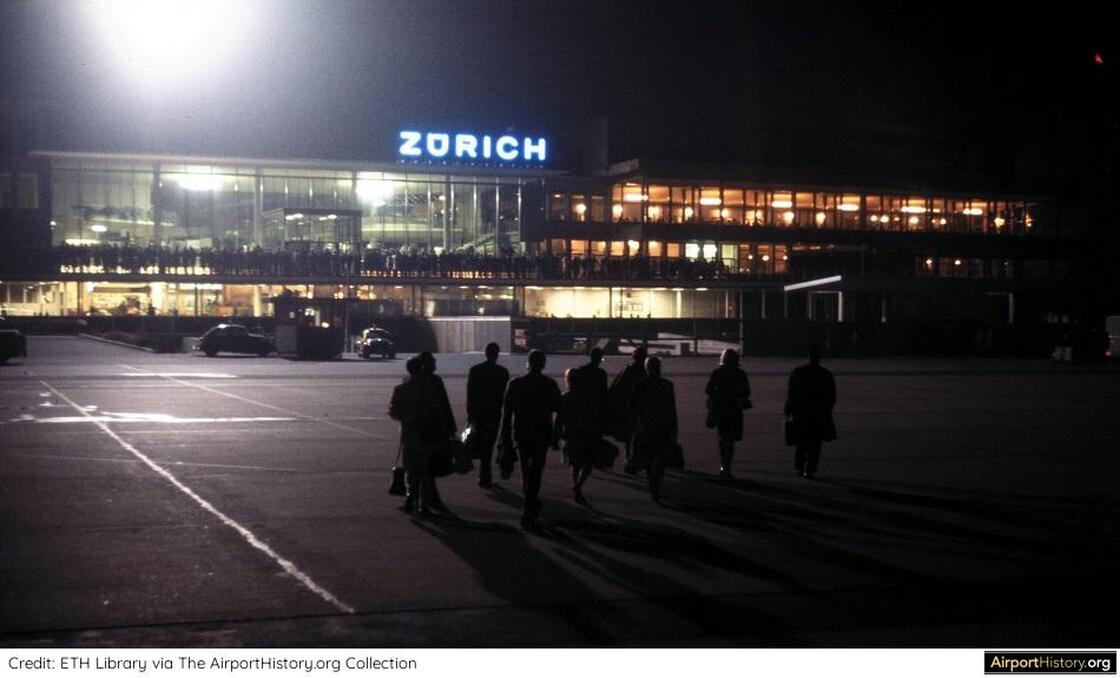 ​An undated 1960s nightly view showing disembarked passengers walking toward the terminal building. Still a lot of people on the observation deck! 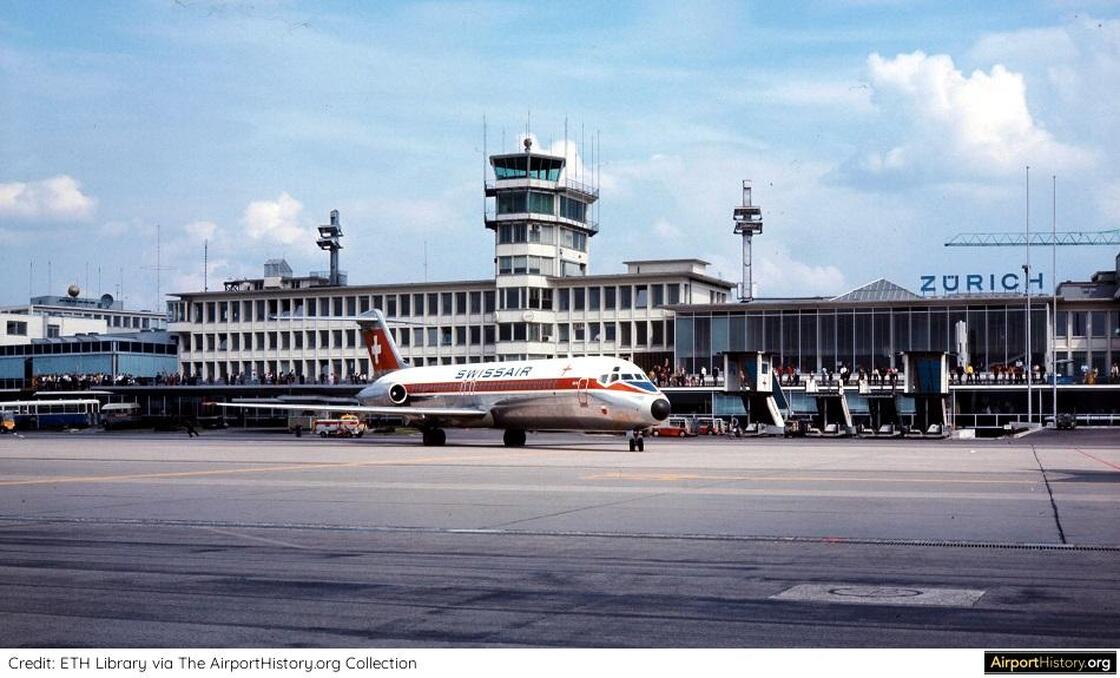 A June 1969 image of a Swissair DC-9-32 taxiing out for take off. Swissair operated 22 aircraft of the type. 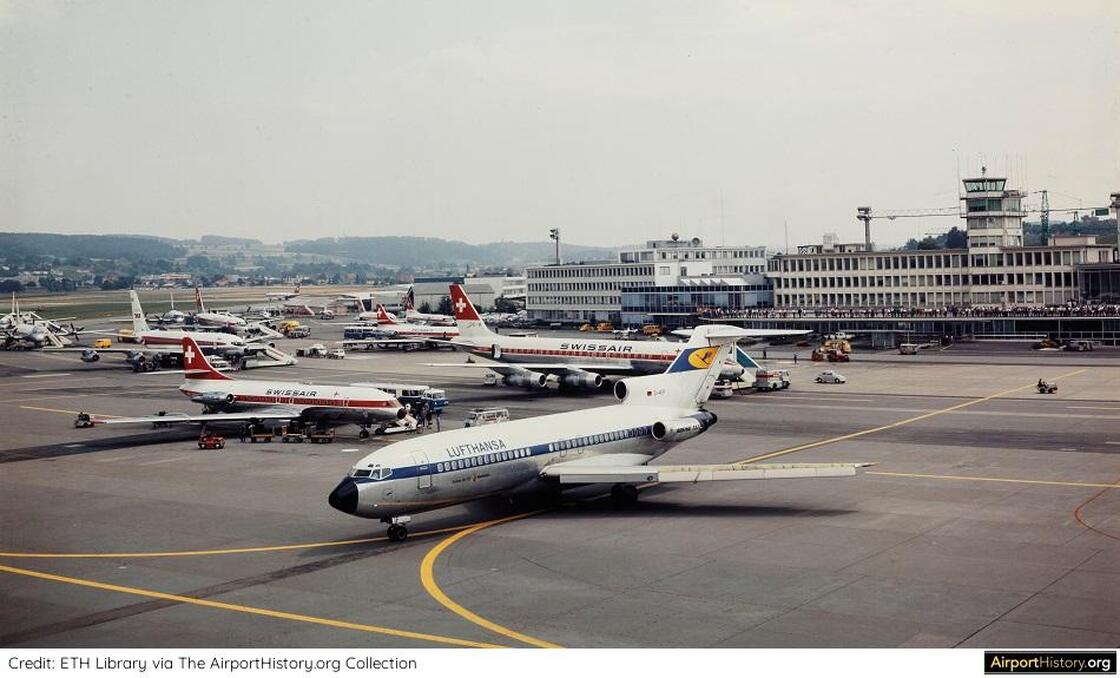 A Lufthansa Boeing 727-100 taxiing out for departure in July 1967. In that year Kloten Airport handled 3.1 million passengers, a growth of 14.3% over the previous year.

​To be concluded in Part 2!

That concludes Part 1 of our photo special on the history of Zurich Airport. In the next part, to be posted soon, we will follow the airport's development from the early 1970s until the present day.