A History of the
Boarding Bridge - Part 1 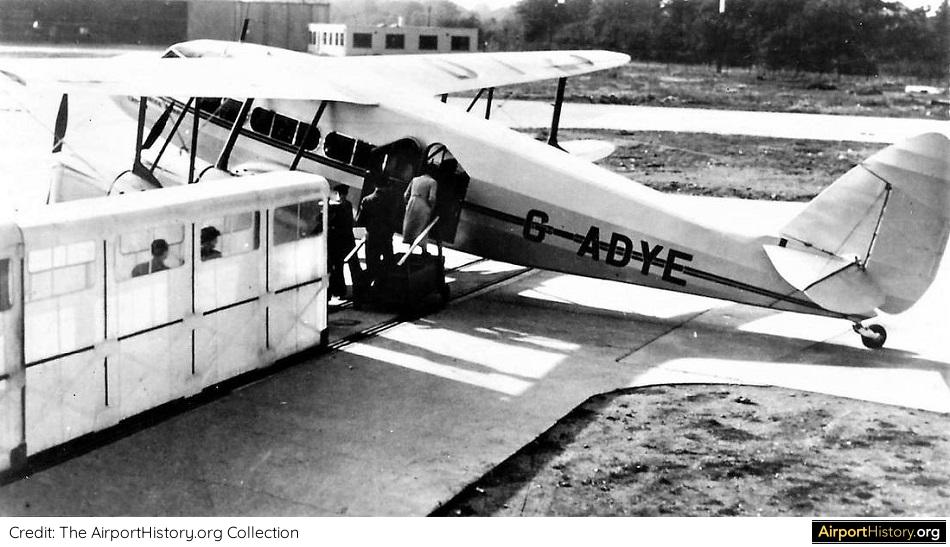 Passengers are boarding an aircraft via one of the extendable canopies at London Gatwick. Note the rails on which the canopy moves.
​By Marnix (Max) Groot
Airport Development
Expert and Historian
Published: July 2, 2019

When you're about to board an aircraft and pass through a boarding bridge, it's sometimes hard to appreciate what a remarkable innovation you're passing through. In fact, it has a history all on its own.

Passenger boarding bridges, also referred to as 'passenger loading bridges', 'jetways', 'jet bridges' or 'jetties', enable quick and efficient loading of aircraft as well as protect passengers against inclement weather, aircraft fumes, noise and the other potential dangers on the ramp.

Boarding bridges have been a standard feature at airports around the world for decades, but do you know when and where they were first used? In a three-part feature, Airporthistory.org explores the roots of the modern boarding bridge and shows how their use slowly spread across the US and around the world.

Predecessors of the modern boarding bridge

TELESCOPIC CANOPIES (MID-1930s)
​
In the mid-1930s a number of airports introduced a solution whereby canopies extended out from the terminal building to the aircraft. Steel rails embedded in the apron surface allowed the canopy (on casters) to be moved forward and backward. This solution was applied on a large scale at London's Gatwick Airport in 1936. Gatwick's "Beehive", a circular shaped terminal, had six gates equipped with telescopic "gangways".

The movable canopies could also be found at a number of airports in the US. Examples are the Pan American Airways Dinner Key Flying Clipper seaplane base in Miami; the Grand Central Air Terminal in Glendale; the United Airport in Burbank and Alhambra Airport in Los Angeles. 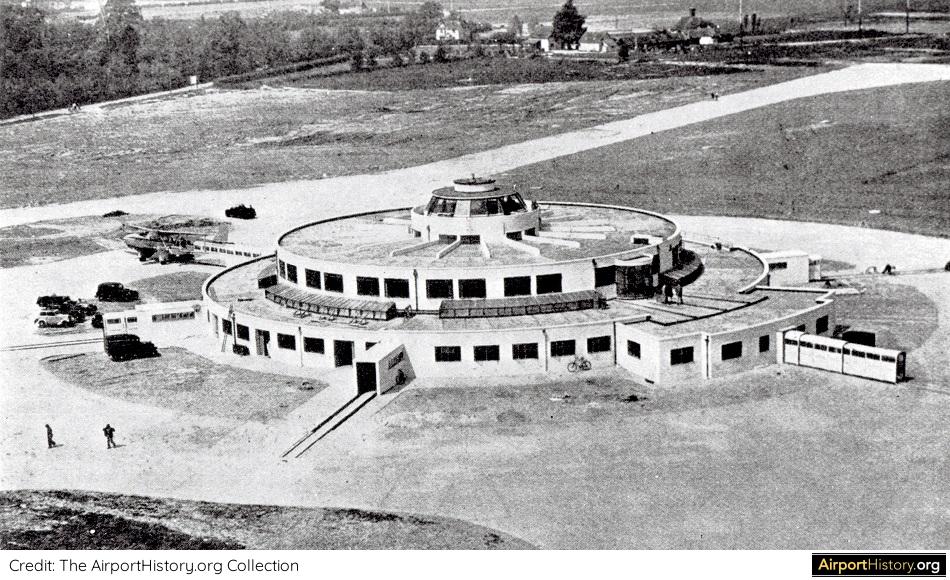 A 1936 aerial image of the "Beehive" at London Gatwick Airport. The Beehive was equipped with six gates with extendable canopies.

As Europe was recovering from WWII, the US became the world leader in aviation and it's here that some fascinating concepts see the light of day.

THE "LOADAIR DOCK" (1952)
​
The idea of ​​moving the plane to the dock for boarding passengers had already been conceived in the 1940s, but was first tested by the Whiting Corp., together with Colombian airline Avianca in 1952 at Barranquilla Airport in Colombia. ​ 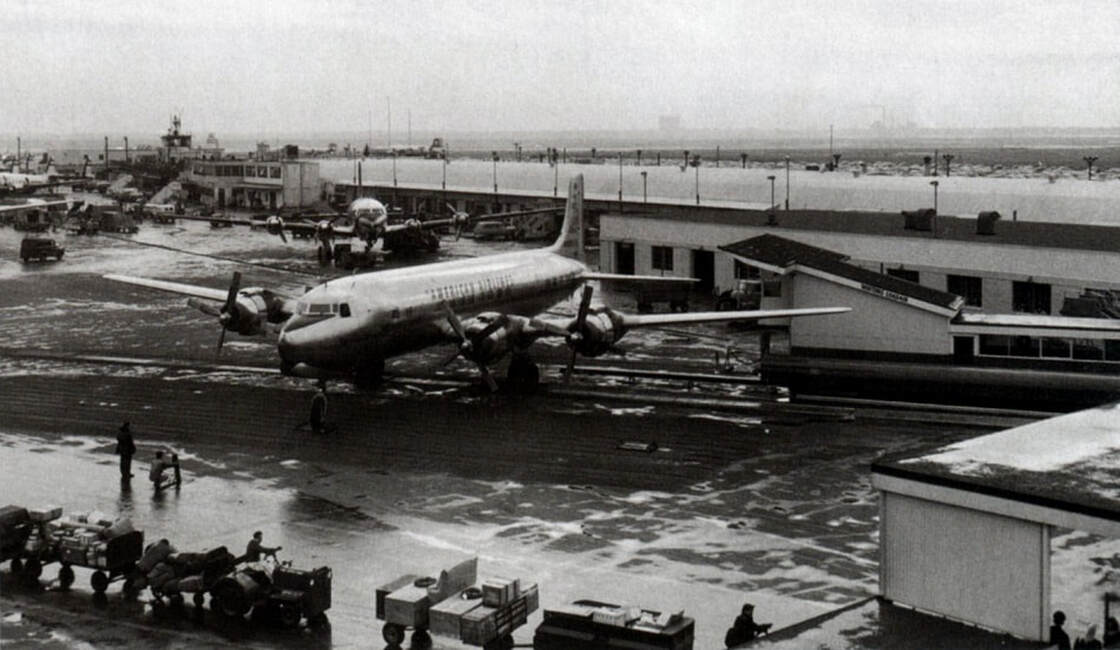 An exterior image of the experimental Loadair Dock installed at New York Idlewild Airport in 1955. An American Airlines DC-7 is in the process of being pulled to the dock. Credit: John Stroud Collection via Mark Blacklock
​THE "AIRDOCK" (1954)
​
In 1953, United Air Lines, using Whiting's Loadair concept as a base, completed the design of a more complex system, which it called "Airdock".
​​THE "AEROBRIDGE" (1956)​

The "Aerobridge", designed by Lockheed Air Terminal Inc. of Burbank, California, was a portable, swiveling ramp designed to connect the aircraft with a cargo or passenger terminal. The Aerobridge had had its own power unit and had a retractable section, which allowed it to change its length from 76 feet (23 meters) to 89 feet (27 meters).

Later, it was decided to create separate passenger and cargo versions of the Aerobridge. The cargo version, produced by "Universal Fabricating Co.", was tested in November 1956 at Travis Air Force base.

THE "AERO-GANGPLANK" (1958)
​
The "Aero-Gangplank", designed by Lockheed Air Terminal Inc. for United Airlines, was an evolution of Lockheed's "Aerobridge". The Aero-Gangplank was a fully enclosed boarding bridge that could extend like a telescope from a retracted length of 55 feet (17 meters) to a maximum length of 107 feet (32 meters). It could also move in a horizontal arc as well as vertically.

In its stored position the bridge left the gate area clear, allowing aircraft to taxi in under their own power. Once swung out in the extended position, the bridge's vertical movement allowed it to cater for different door still heights.

These characteristics definitely make the Aero-Gangplank the first modern passenger boarding bridge. A single prototype was installed at Chicago O'Hare Airport on Friday, March 28, 1958 and was tested until November of the same year. 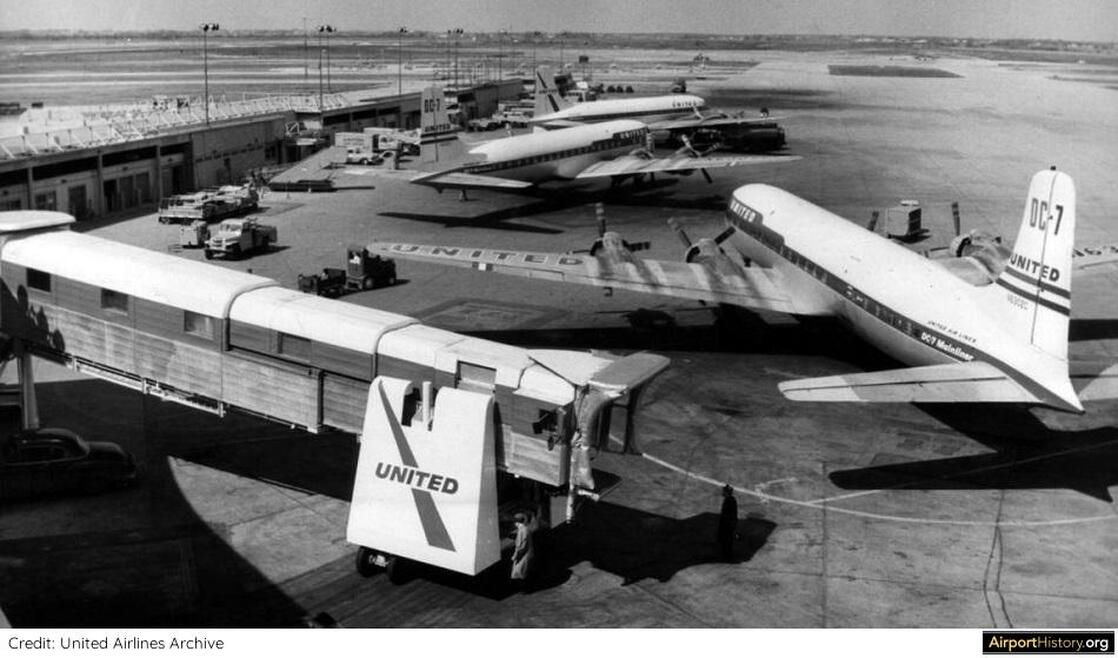 The world's first experimental modern boarding bridge called "the Aero-Gangplank" was installed and tested at Chicago O'Hare airport in the spring of 1958. Credit: United Airlines Archive 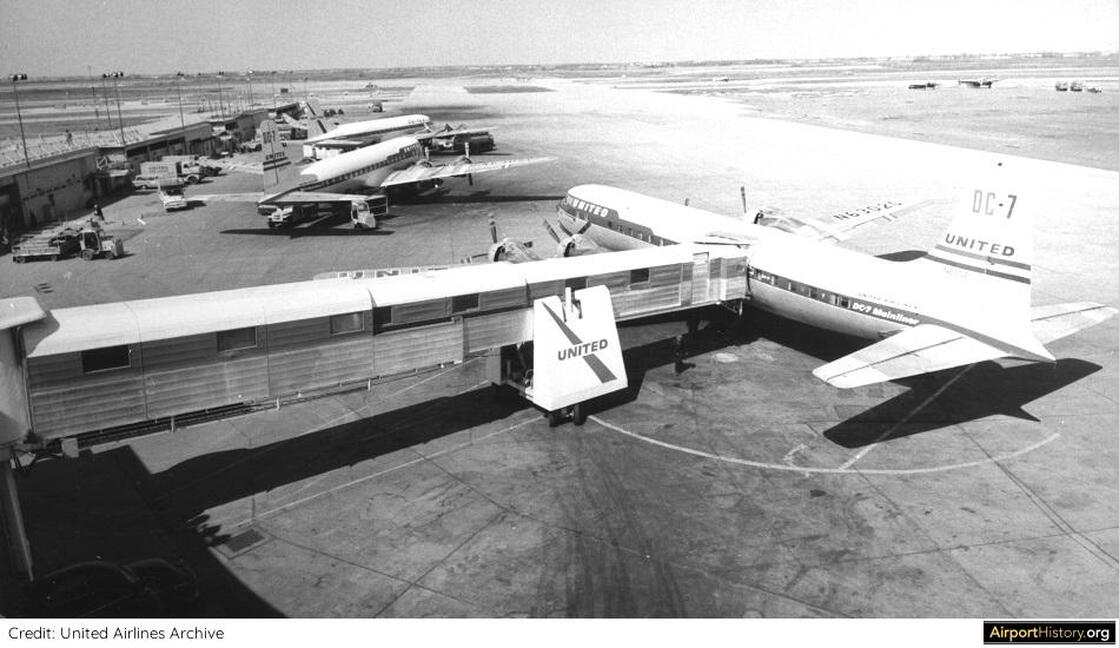 The Aero-Gangplank is connected to a United Airlines DC-7. It took 90 seconds to position the bridge in front of the aircraft. Note that aircraft like the DC-7 had their main passenger door toward the rear. Credit: United Airlines Archive 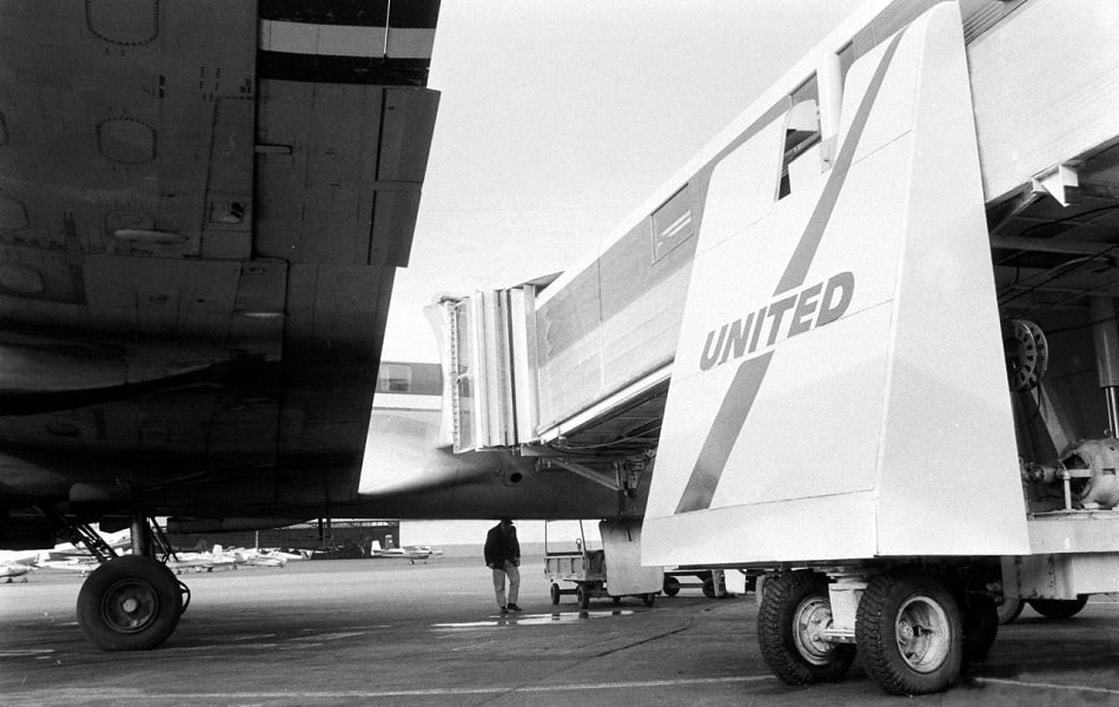 A close-up of the Aero-Gangplank being connected to a United DC-7. The wheels underneath allowed the bridge to move sideways. Credit: Life/Getty 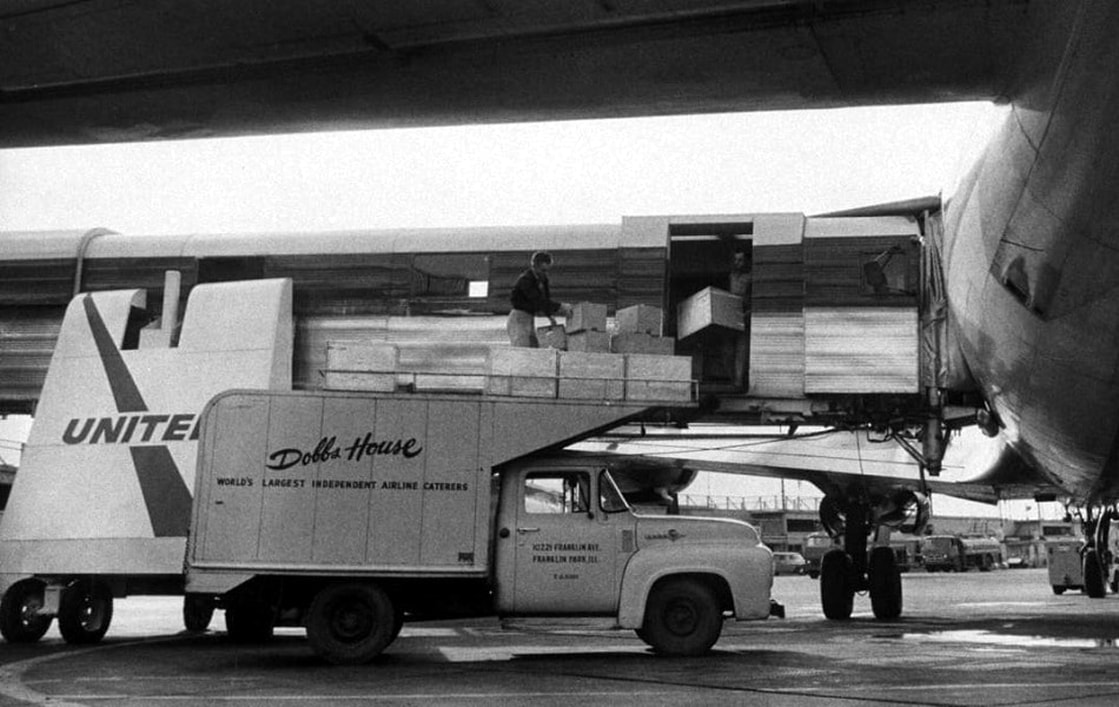 A side door in the Aero-Gangplank was used to bring airline meals on board. Credit: Life/Getty
Passengers who used the new loading device apparently liked it. Here some quotes from the United Airlines News Magazine from that year:

"My wife and I have just completed a trip around the world - mostly by air. This is the finest thing we have seen by way of passenger comfort and convenience in boarding aircraft."

"I thought I was still in part of the terminal building until I found myself at the airplane door!"

"How different this is compared with my last trip to Chicago when I ruined a new pair of shoes walking from the plane to a covered area!"

​AMERICAN AIRLINES AT SAN FRANCISCO (1959)
​
American Airlines has the distinction of putting into use the first fully operational boarding bridge into service on July 14, 1959 at San Francisco International Airport. Installed at a cost of USD 100,000, they were in effect two bridges built by different manufacturers.

​American's first-class "Mercury" passengers boarded through a "Jet Airwalk" built by Lockheed Air Terminal Inc. This was a bridge with limited telescopic and vertical movements only (known as a nose-loader). "Royal Coachman" passengers boarded through a "Jetway", built by the Pacific Iron and Steel Corp. of Los Angeles. The name Jetway later on became synonymous with boarding bridges. 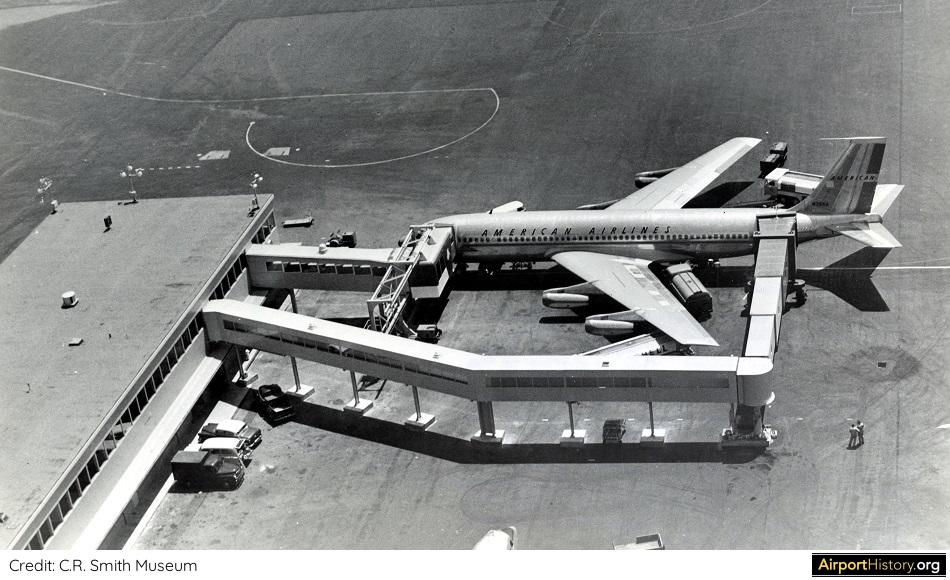 A Boeing 707 with a 112 passengers could be loaded in five minutes. Trials with the Boeing 707-120 showed that the time saved by having a front and rear boarding bridge was only a few minutes and did not justify the extra cost of the rear door bridge. Hence, American continued with front loading only. The corridor was dismantled and the jetway was used at the adjacent gate. ​ 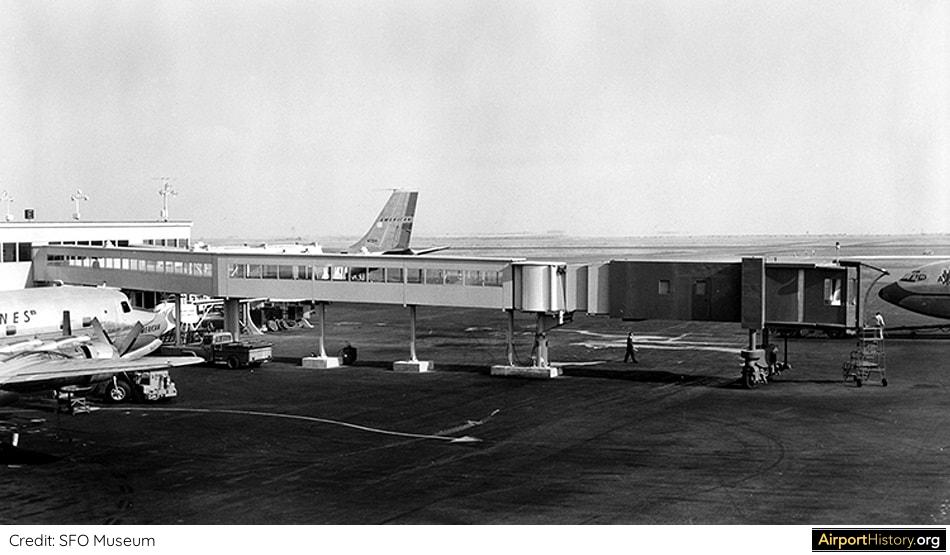 A view of America's first fully operational boarding bridge at San Francisco. Credit: SFO Museum
DELTA AIR LINES AT ATLANTA (1959)
​
In late 1957, Delta Air Lines started contemplating the design of a boarding bridge for use on their upcoming DC-8s out of Delta's Atlanta homebase. ​Delta conceived a simple boarding bridge that would require the aircraft to park "nose-in" and could only extend outward to the aircraft as well as up and down to adjust to different door still heights which could vary due to aircraft load. 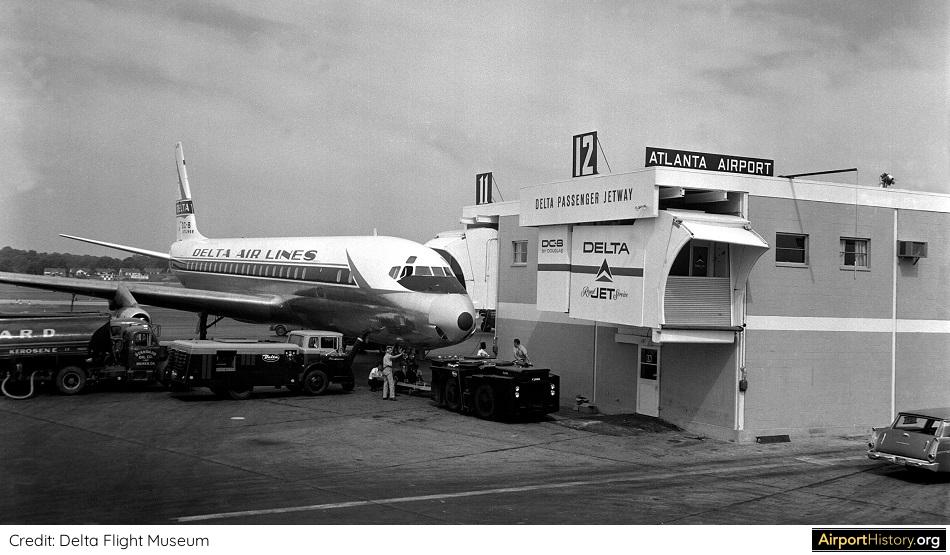 A Delta DC-8 is docked at one of two gates equipped with the two first boarding bridges. Atlanta's concourses were single floor structures and a special two-level building had to be constructed to accommodate the bridges. Credit: Delta Flight Museum
UNITED AT SAN FRANCISCO ​(1959)
​
In early 1959, after the trials with the "Aero-Gangplank" at Chicago O'Hare, United Airlines commissioned the Pacific Iron and Steel Corporation, which now was quickly becoming the go-to company for boarding bridges, to design and build a passenger gangway similar to the ones featured on cruise ships, but to service aircraft. Pacific Iron and Steel came up with the classic, telescoping bridges that are ubiquitous at airports around the world today.

Contrary to Delta and American, United stuck to the concept of side-on or parallel parking, enabling aircraft to taxi in and out under their own power and allowing boarding bridges to be connected to both the front and back of the aircraft. This enabled quicker boarding as well as separate boarding of first class and coach passengers. It did however require more gate space and more protection from jet blast.
​United ordered 10 bridges for their San Francisco base. The first four of these were installed at United's B concourse, the first concourse that was designed with boarding bridges in mind, on July 29, 1959. The bridges were put into use in time for United's scheduled jet services, which commenced on September 18, 1959. The remaining six bridges were installed in late 1959 and in early 1960.

At around the same time, United ordered a large number of boarding bridges for its future concourses and terminals at Chicago O'Hare, Los Angeles, New York Idlewild and San Francisco. This made United the first airline to commit to the boarding bridge in a big way.​ 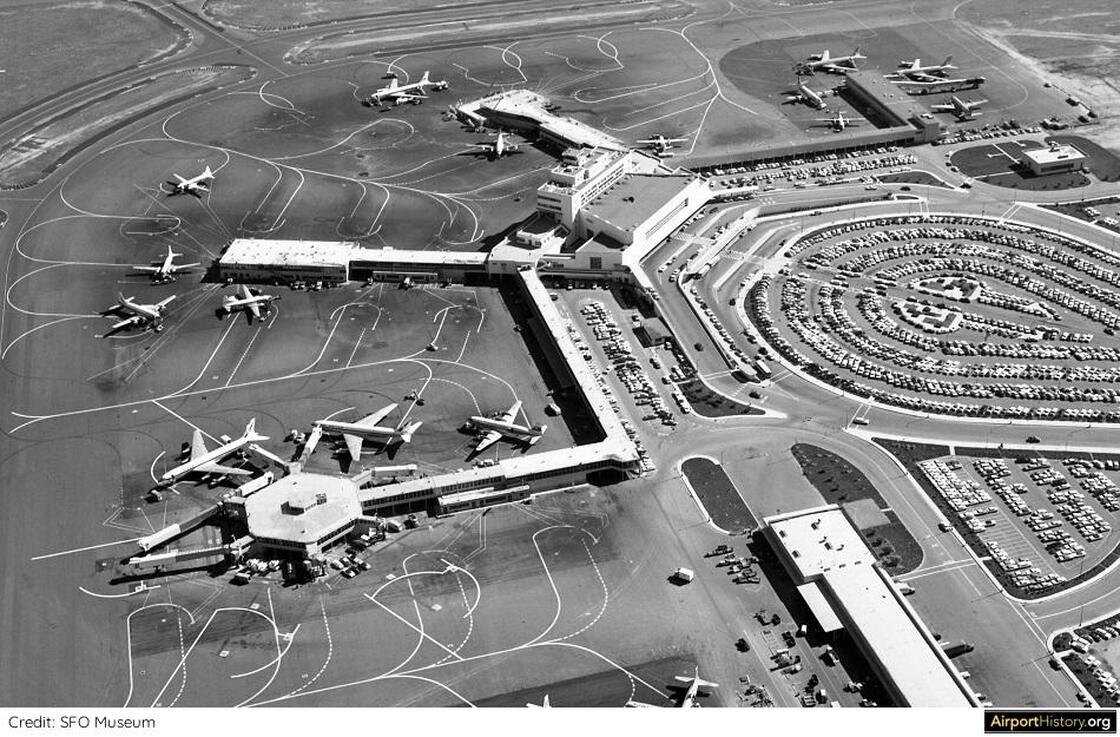 An aerial of San Francisco's terminal area taken on February 19th, 1960. In the foreground we can see United's Concourse B, which by now has six boarding bridges installed. The remaining four would be installed sometime during the next months. At the top right we can see American's first boarding bridge Credit: SFO Museum

The first bridge outside the United States

​The bridge was connected to Schiphol's intercontinental departure lounge and hence, could only be used for boarding flights. It was exclusively used to service KLM DC-8s and was used seven days a week and three to four times a day.

Later on, Aviobridge delivered 25 boarding bridges for the expanded Schiphol Airport in 1967 and went on to become an important global supplier of boarding bridges in the ensuing decades. Better a well-copied idea than an ill-conceived one! 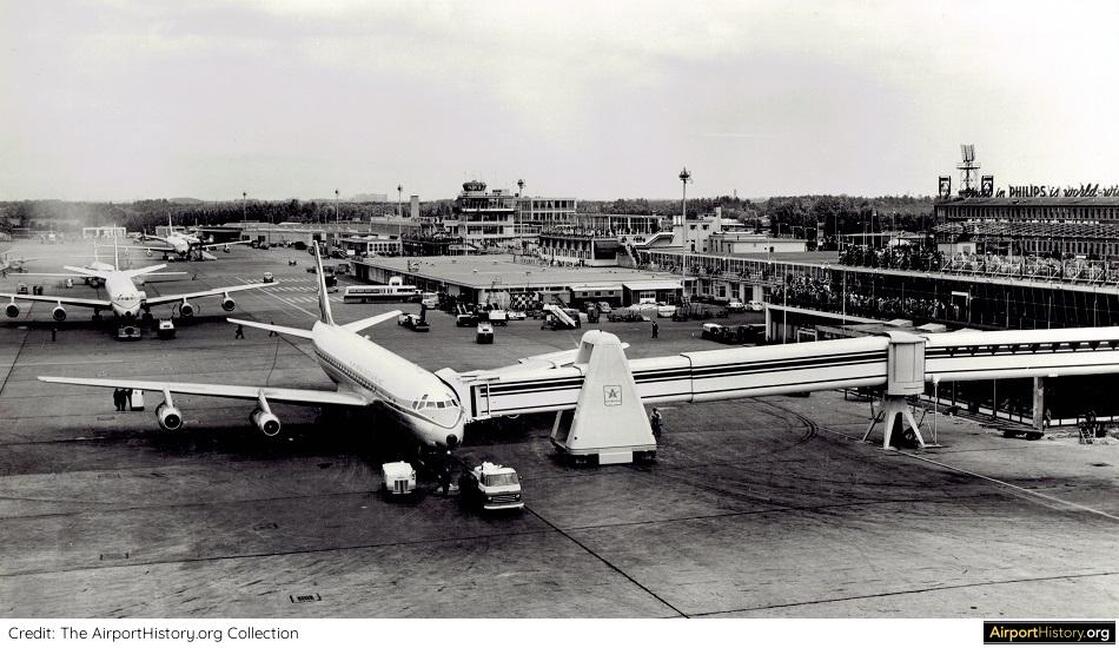 The Aviobridge prototype is servicing a KLM DC-8. Image taken on August 1, 1961, a week before the official inauguration of the bridge. Credit: Author's Collection

In Part 2 of our history, to be posted in the future, we will learn how the boarding bridge spread throughout the US. We'll also explore an interesting alternative to boarding bridges, the Passenger Transfer Vehicles or PTVs. Lastly, we'll address Pan American's eccentric choice for boarding passengers in its trendsetting terminal.

This article would not have been possible without the kind assistance of the following individuals and institutions; Barbara Hanson, consultant at the United Archives and Michael Masuka, Managing Director-Creative Services at UA; Marie Force, Archives Director at the Delta Flight Museum, Timothy Mcelroy of the CR Smith Museum; The SFO Museum and Jon Proctor.