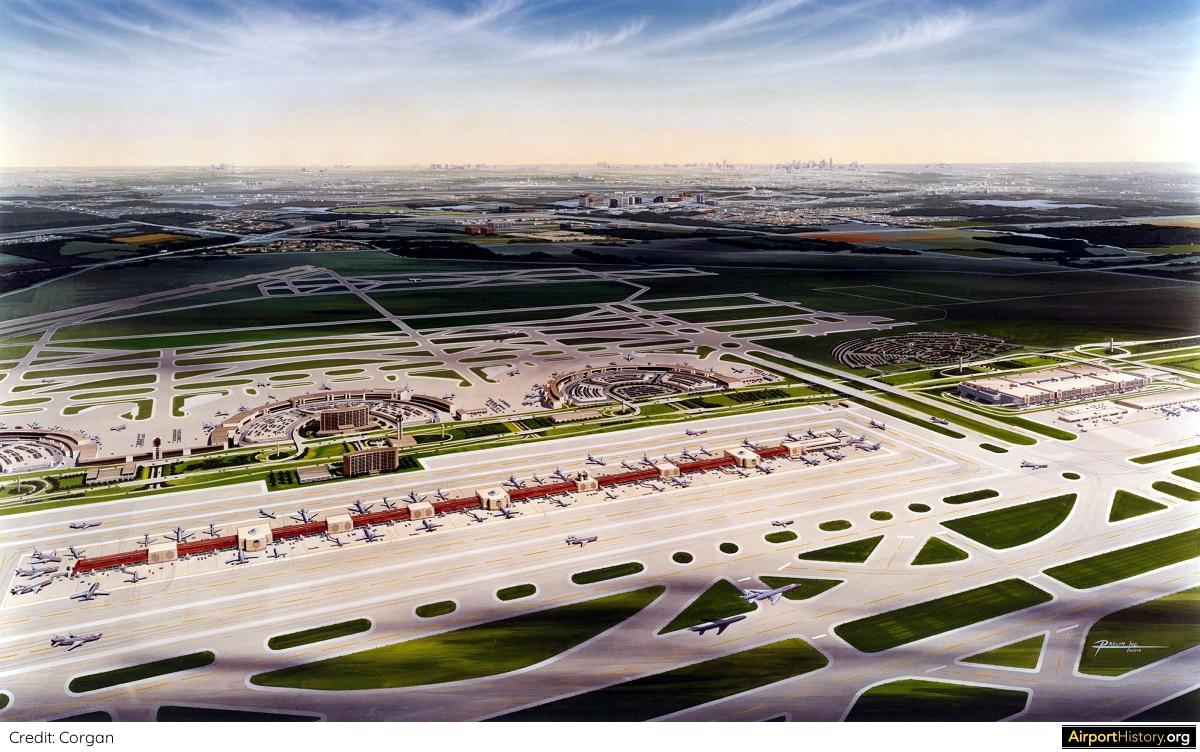 An artist's impression of the planned Westside Terminal. The terminal building is visible to the right of the photo. The Satellite Pier could be expanded to well over a mile long and have up to 100 gates in the future.
By Marnix (Max) Groot
Airport Development
Expert and Historian
Published: April 8, 2020
The "DFW" you know today, could have looked completely different. Back in 1989, airport planners proposed to gradually eliminate Dallas/Fort Worth Airport's characteristic semi-circular terminals, replacing them with linear satellite terminals.

​This two-part article retells the story. In Part 1, we will explore why planners thought that a radical change to DFW's layout was necessary.

I want to give a special thanks to Jonathan Massey and Austin Reed of Corgan. Without their assistance, this article would not have been possible.

With its semi-circular terminal buildings, Dallas/Fort Worth Airport has one of the most recognizable airport layouts in the world. Opened in January 1974, the airport's "drive-to-the-gate" concept was devised in a time when it was thought that "DFW" would mainly serve people originating in, and destined for the Dallas-Fort Worth metroplex. 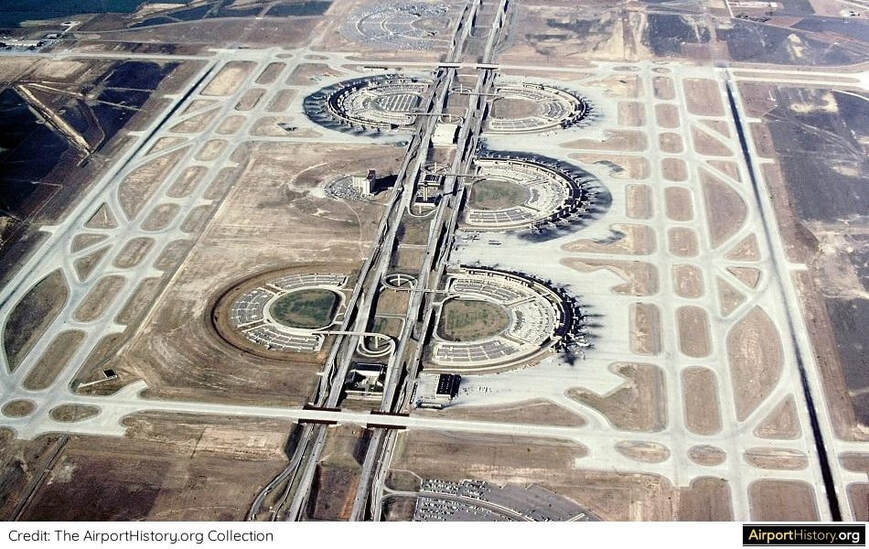 A 1977 aerial of DFW taken from the south. For the initial phase, four terminals were built, of which only the Braniff terminal (top left) was built at its full length.

In 1978, a huge paradigm shift took place which would bring profound change to the US aviation industry. On October 24 of that year, The Airline Deregulation Act was signed into law by President Carter. The law gradually removed federal government control over such areas as fares, routes and market entry of new airlines.

A few years later, in 1981, American Airlines and Delta, DFW's two principal carriers, both introduced hub-and-spoke operations, rapidly adding routes and frequencies, and funneling more connecting passengers through the airport. As a result, traffic at DFW boomed, with growth even hitting double digits in the mid-1980s (see bar graph), and far outpacing growth at other US airports.

In order to cope with the projected demand the airport needed to be expanded. In 1987, the airport started the preparation of a new master plan--the first one in almost 20 years--outlining how the airport should grow. 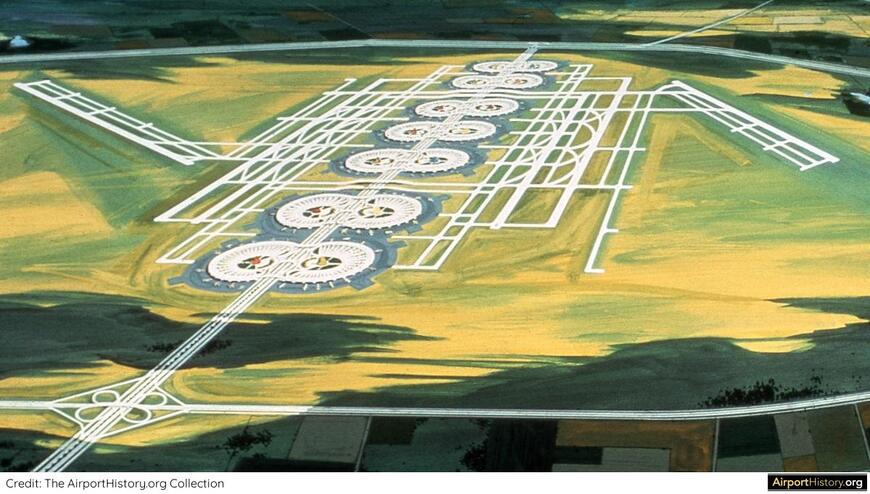 A fantastic late-1960s artist's impression of the future Dallas/Fort Worth International Airport. The original master plan envisioned six runways as well as 13 semi-circular terminal (not 14 as depicted here). Each terminal would serve an airline or a group of airlines.

DFW must be altered to keep pace with the changes in the industry
- Tom Sullivan, DFW's first Executive Director

By 1987, the airline occupied 40 gates--many of which equipped with double boarding bridges--in terminals 2E and 3E. Early studies showed that by 2005 American would need about 60 gates.​ DFW's master plan allowed for the construction of plenty more semi-circular terminals, but this was not a solution as it would have required more passengers to switch between terminals to catch their connecting flight. 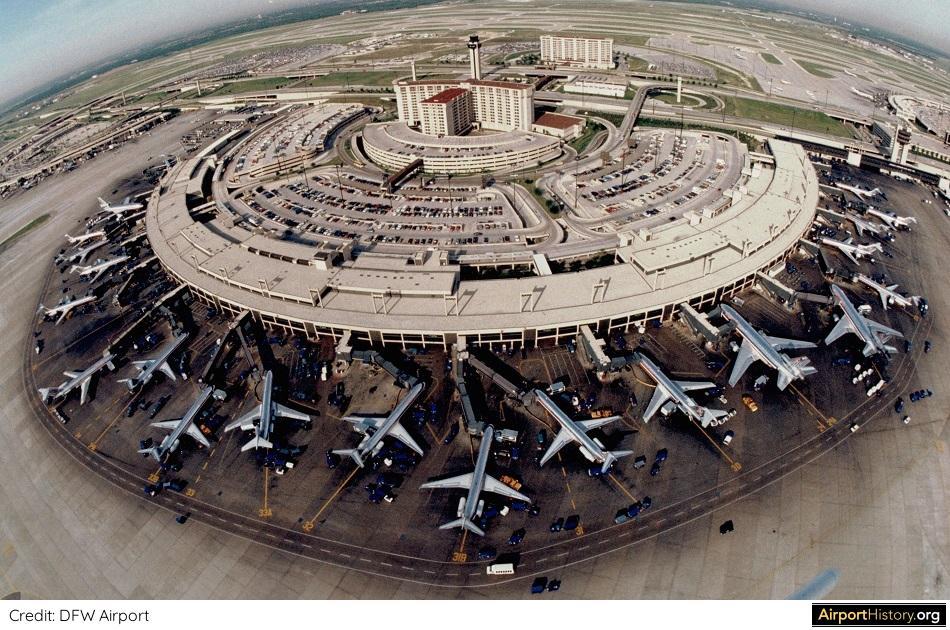 An aerial view of American Airlines' terminal 3E in the mid 1980s. This image clearly demonstrates the airport's drive-to-the-gate concept. By the late 1980s, most passengers were transferring through DFW, making the concept obsolete.
​In addition, the drive-to-the-gate concept required a substantial amount of ground to be taken up with roadways, parking and transit operations, while the need was for more gates and space for aircraft circulation. Another aspect to consider were American's budding international ambitions with the carrier expecting to open new routes to Europe, Asia and Latin-America in the near future.

​Although American had its own Federal Inspection Services (FIS) and a number of international capable gates in terminal 2E, capacity was not sufficient to accommodate the planned growth. Lastly, both American and Delta operated on the eastern side of the airport, leading to congestion on the platform at peak times.

A 1987 master plan study prepared by Bechtel concluded that the major expansion should occur west of the International Parkway, the spine road bisecting DFW, and that "the current semi-circular terminals should be abandoned in favor of more efficient building forms". 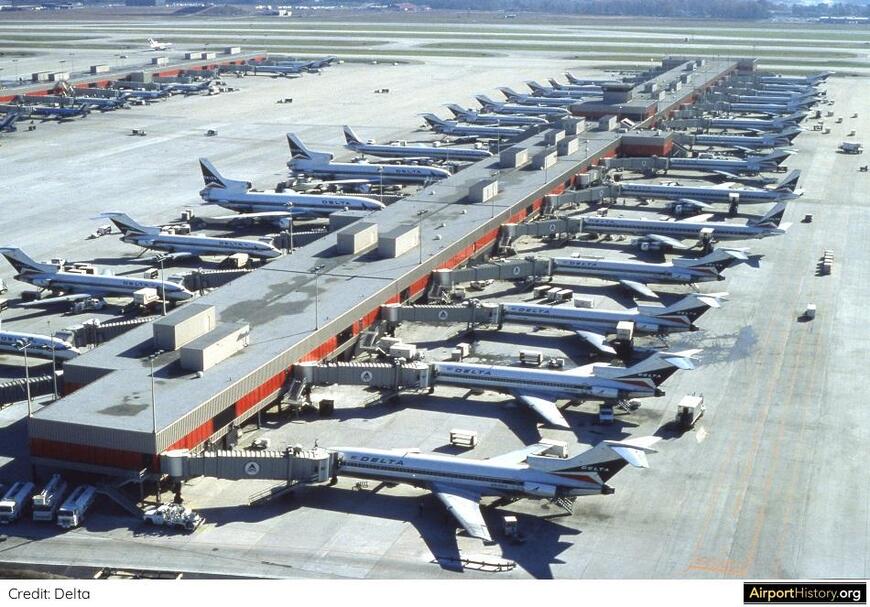 A mid-1980s aerial of Delta's Concourse A at Atlanta's William B. Hartsfield International Airport, as it was called then. To date, the 1981 terminal complex is still considered to be one of the most successful and efficient airport concepts ever.
ADJUSTING THE PLAN

​However, the concept recommended by the study was found to be an inadequate solution to American's planned growth.​ Among other things, American objected to the cost and operation of a people mover. In addition, they foresaw potential aircraft congestion as the area between the satellites could only be entered and exited from one side 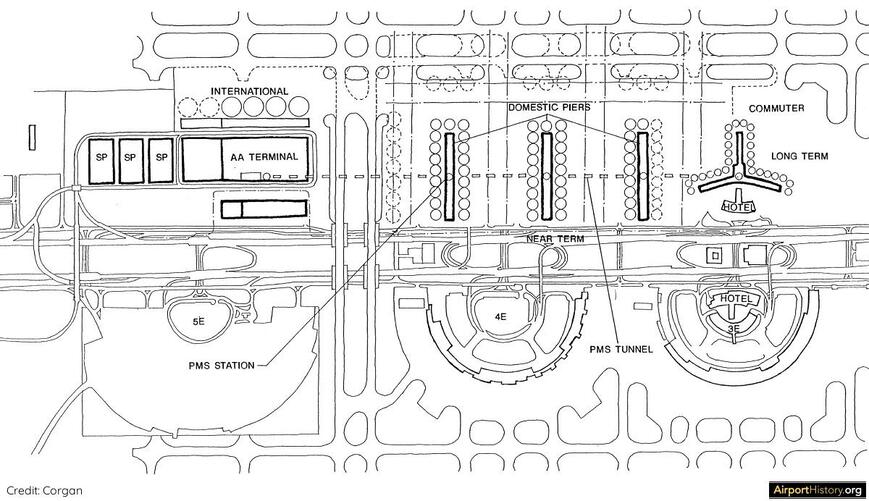 Bechtel's proposed new American Airlines terminal would have had a central landside facility and three concourses, with provision for a fourth. Explanatory notes: "SP"= Surface Parking. "PMS"=People Mover System
​American Airlines engaged Corgan, a leading architecture firm, to review the plan and develop alternative designs. The main requirements were that the design would not require a people mover system and provided better aircraft circulation.

A number of alternative schemes were proposed (see gallery below), none of which provided a satisfactory solution. Thus, the people mover was re-introduced, and due to American's continuing and accelerating growth, the level of ambition was raised.

The projected future goals for the terminal facilities were: an increased number of gates; the consolidation of American's operations into one single terminal; to provide for ongoing and future growth; and to improve passenger levels of service. Taking Bechtel's concept as a basis, Corgan created one of the most ambitious airport plans ever conceived.​
GALLERY: STUDIED ALTERNATIVES 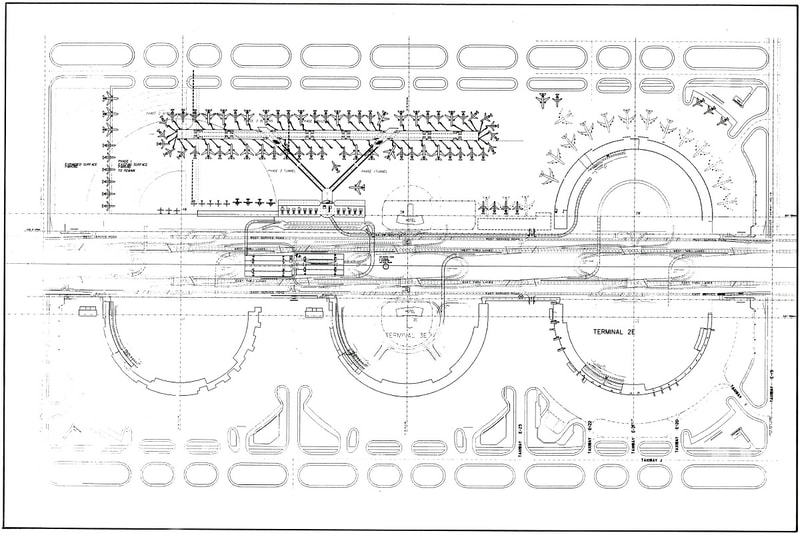 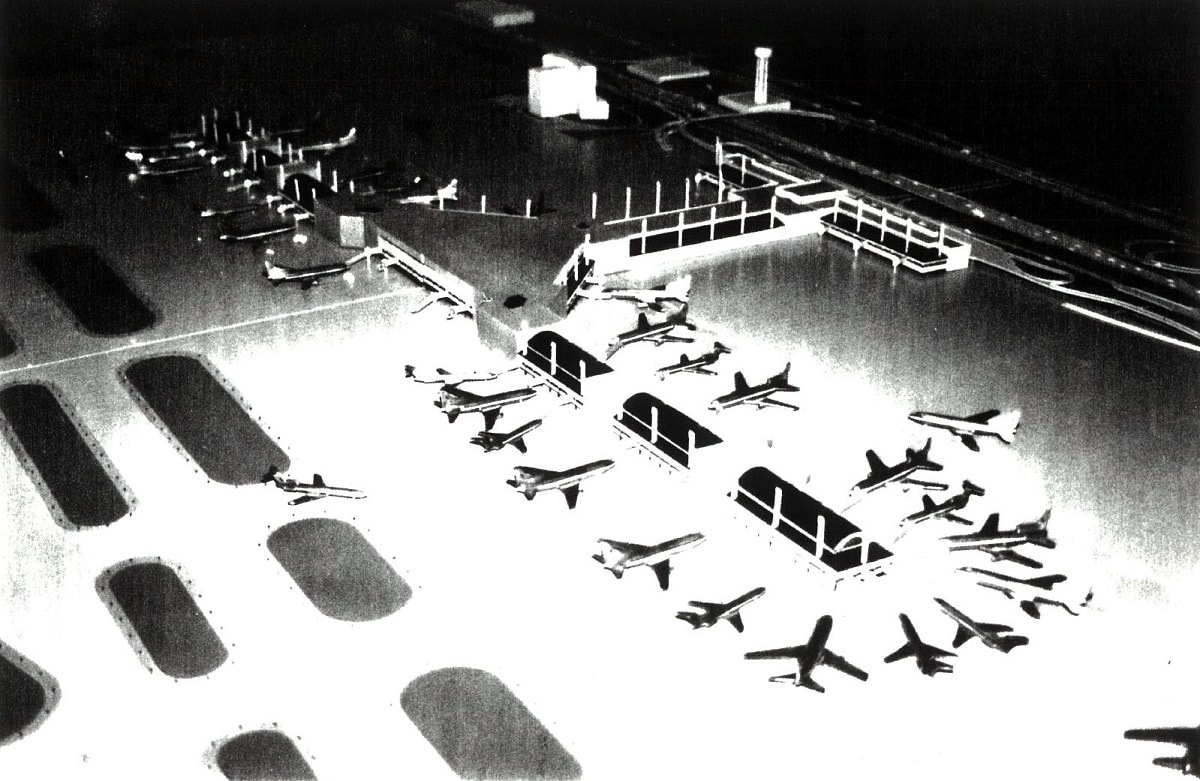 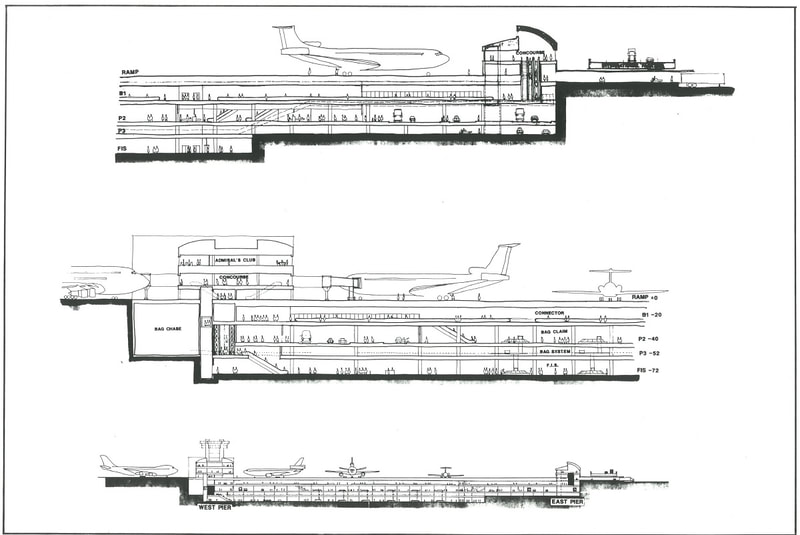 THE WESTSIDE TERMINAL
​
The proposed Westside Development was a comprehensive plan for the area west of the International Parkway. It encompassed facilities such as a terminal building and satellite piers for mainline and commuter flights; cargo and airmail facilities; a support services building housing facilities for flight crew; and a ground service equipment (GSE) building.

The centerpiece of the scheme was both the terminal building and mainline satellite pier. The colossal terminal building consisted of 7 million square feet (650,000 square meters) of floor space and housed check-in and baggage claim. It would be served by a completely new roadway system from an expanded international parkway. Terminal functions on the main floor would be supported by a 12,000-car parking garage above.

To the north of the terminal building was a 3,600-foot (1,100-meter) 'Satellite Pier Building' boasting 66 gates. The pier could be lengthened to well over a mile long, and house over a 100 gates! The terminal would be connected to the satellite by means of an Automated People Mover (APM) train. 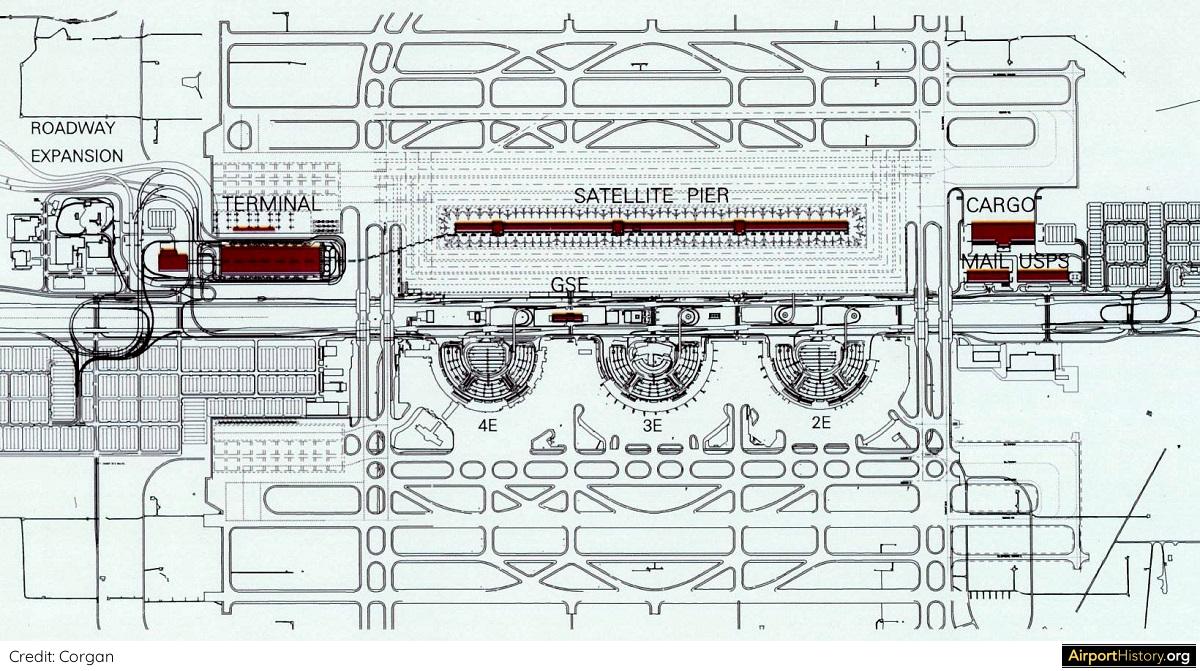 A map of the planned Westside terminal. In the maximum scenario, the Satellite Pier could be lengthened to 6,200 feet (1,890 meters).
This concludes Part 1 of our two-part article on the 1989 scheme to rebuild DFW! In Part 2, we will explore the plans for the Westside Development in great detail, featuring many fantastic artist's impressions of the terminal and satellite pier. We will also find out what lead to the scheme's cancellation. You can read it here.