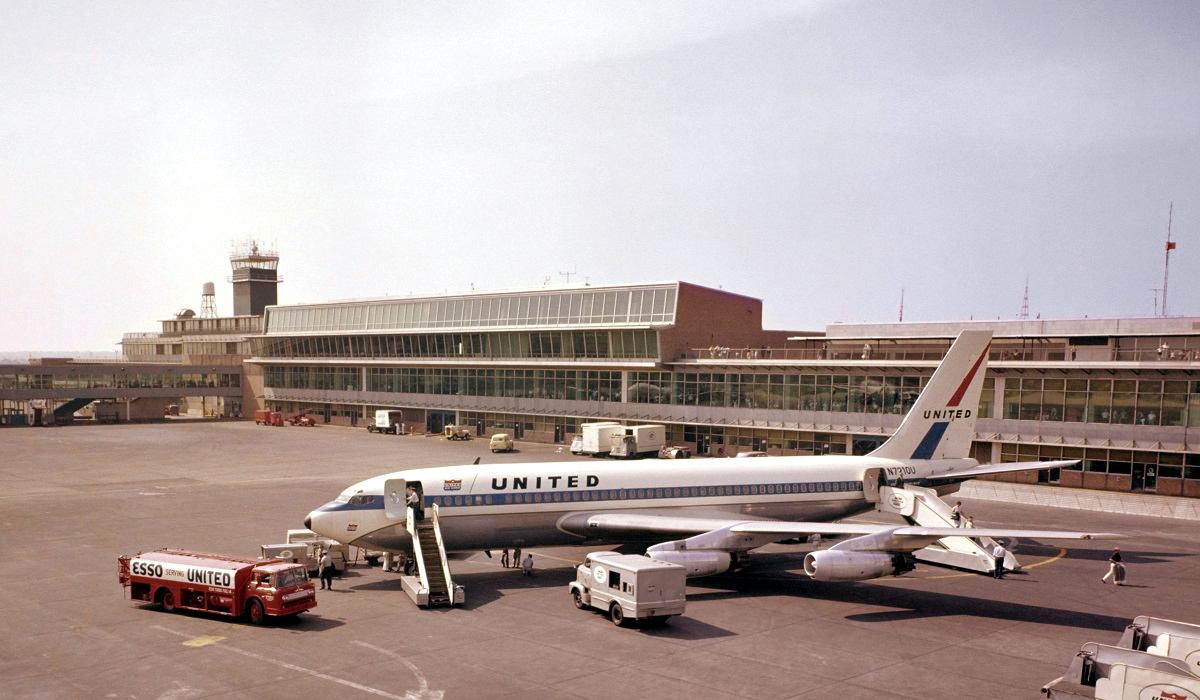 On June 20th, 2020, it will be exactly 80 ago years since Philadelphia International Airport was dedicated.  These days, there's not much to celebrate during these extremely challenging times for aviation. However, we did not want to pass the chance to reflect on this magnificent airport's great history.

Therefore, we have prepared an extended photo feature with a selection of photos chronicling "PHL's" evolution over the past 80 years, with a special focus on the passenger terminal facilities. We will begin by exploring the airport's development until the early 1950s, and then head into the Jet Age in part 2.

I would like to thank Heather Redfern, Public Affairs Manager, and David Rosenblum, photographer at Philadelphia International Airport, for their kind assistance in the preparation of this article. I also want to thank Shea Oakley, aviation historian, for his help.

​BEFORE PHILADELPHIA INTERNATIONAL AIRPORT
​​
The City of Philadelphia officially entered the field of air transportation in 1925 when it provided 125 acres of land for training aviators of the Pennsylvania National Guard, 6 miles (11 kilometers) southwest of the city, and not far from the Delaware River.

​In 1926, the City executed an agreement with Ludington Exhibition Company, the forerunner of Eastern Airlines, to operate the facility as the "Municipal Aviation Landing Field".

October 22, 1927 was an historic day for Philadelphia and its airport as the Spirit of Saint Louis, piloted by Charles Lindbergh , touched down at Philadelphia Airport. The arrival in Philadelphia occurred during a tour of the United States following Lindbergh's historic solo flight from New York to Paris. During his visit, Lindbergh ceremoniously raised the American flag to dedicate what was then called Philadelphia Municipal Aviation Landing Field. 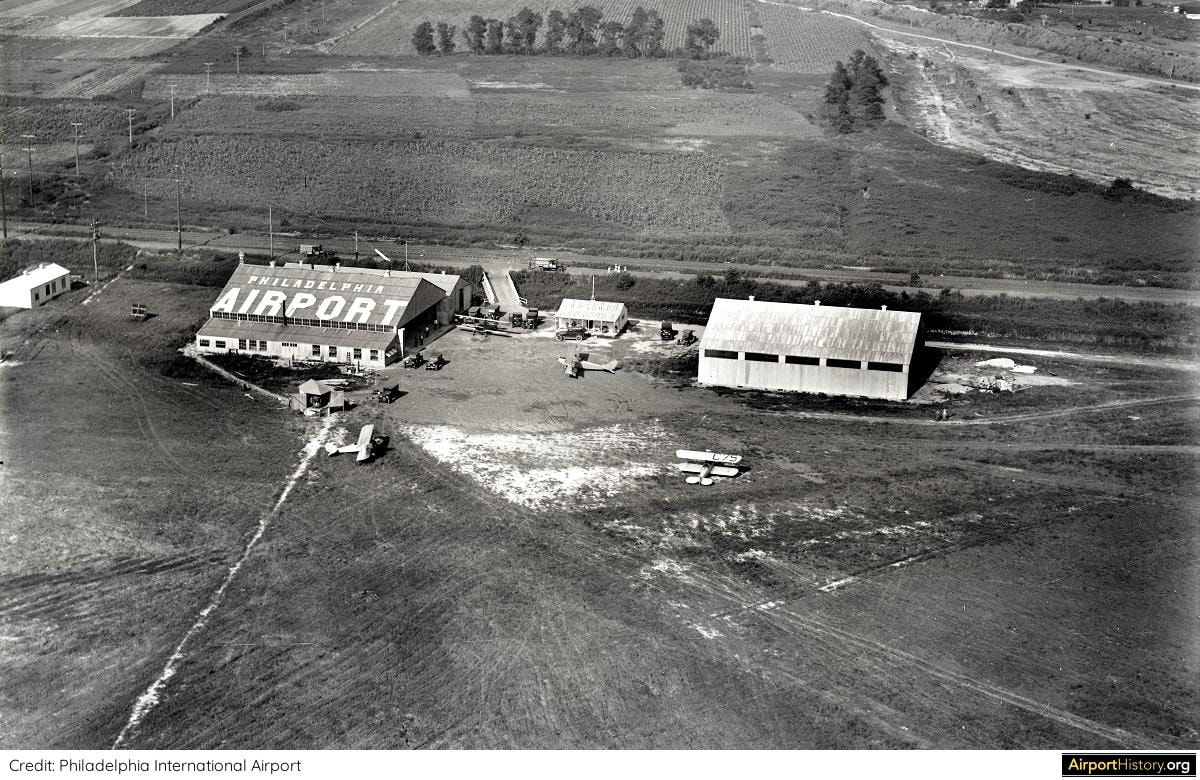 A 1927 aerial image of the Philadelphia Municipal Aviation Landing Field.
CONSTRUCTION AND OPENING
​
In the early 1920s, an adjoining shipbuilding yard on the Delaware River called Hog Island, had become derelict. In 1930, the City purchased Hog Island from the United States Shipping Board for USD 3 million to provide for the expansion of the airport.

However, because of the Great Depression, the airport project lay dormant until 1936. Actual construction of a terminal building and landing field began in 1937, and the airport was formally opened as "Philadelphia Municipal Airport" on June 20, 1940. 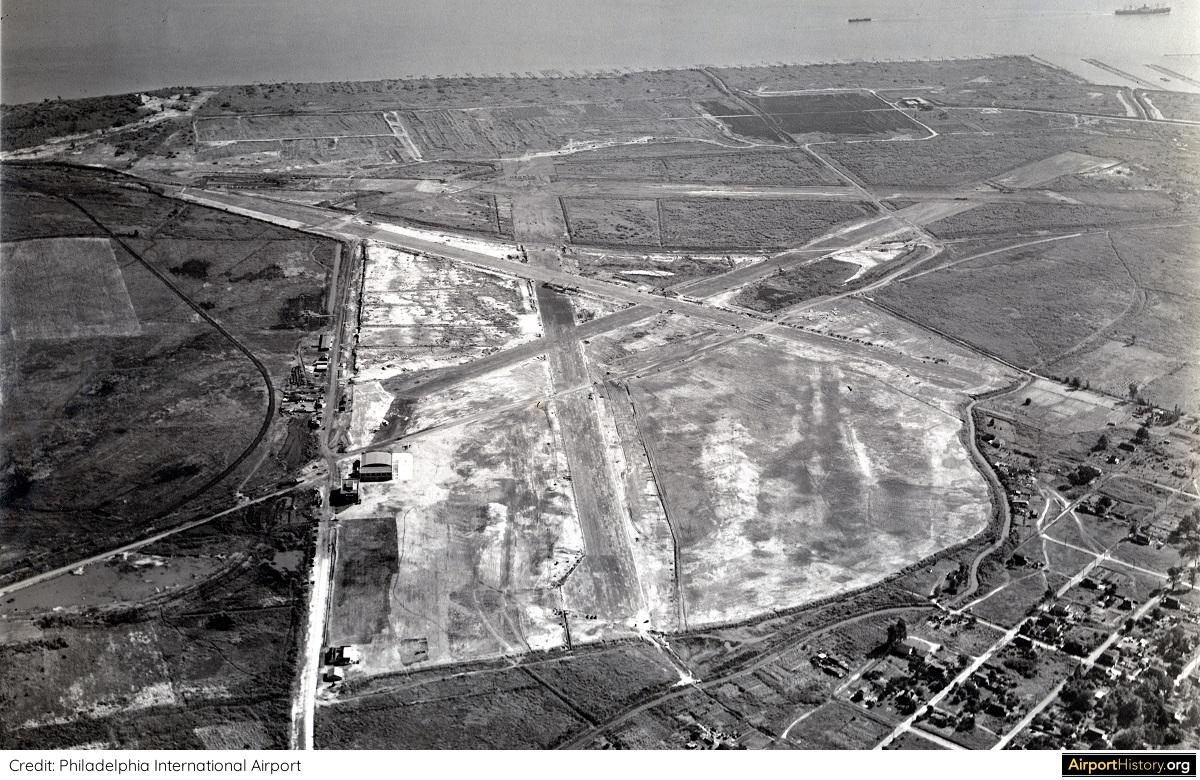 An aerial view, likely taken in June 1936. By this time the airport consisted of four dirt strips. Major works to improve and elevate the soil, surface the runways and the construction of the passenger terminal building would get underway in the following months. 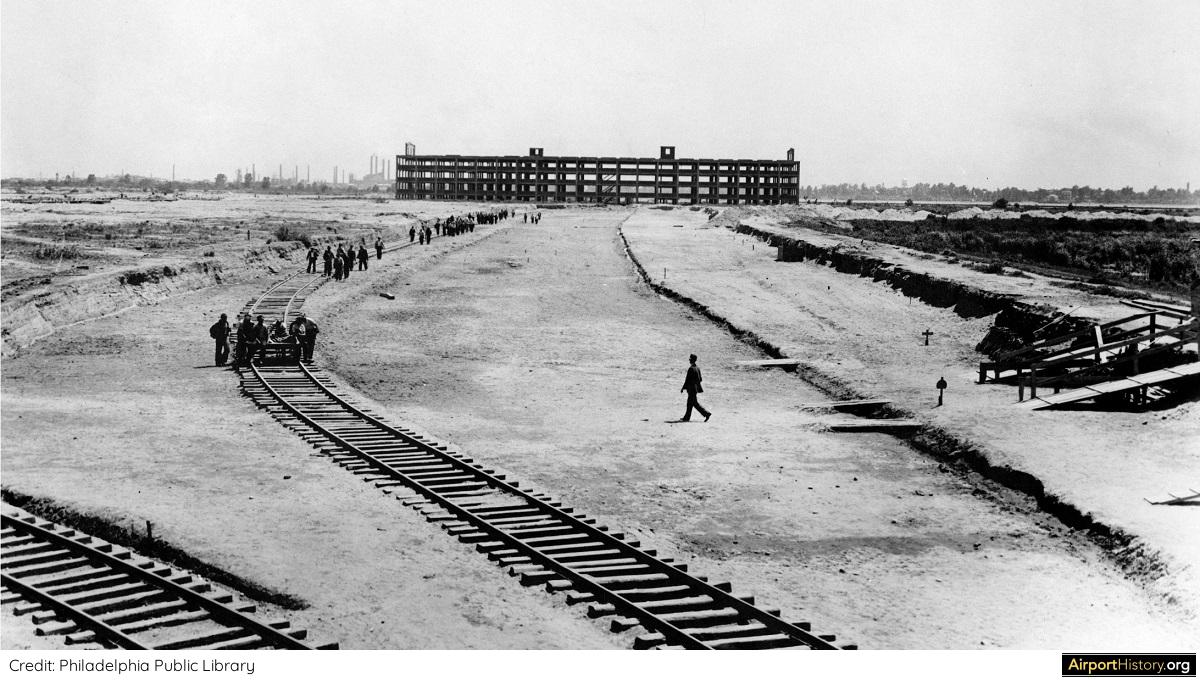 Construction of the new Philadelphia Municipal Airport is underway in July 1936. Temporary rail tracks were laid to haul in construction materials. 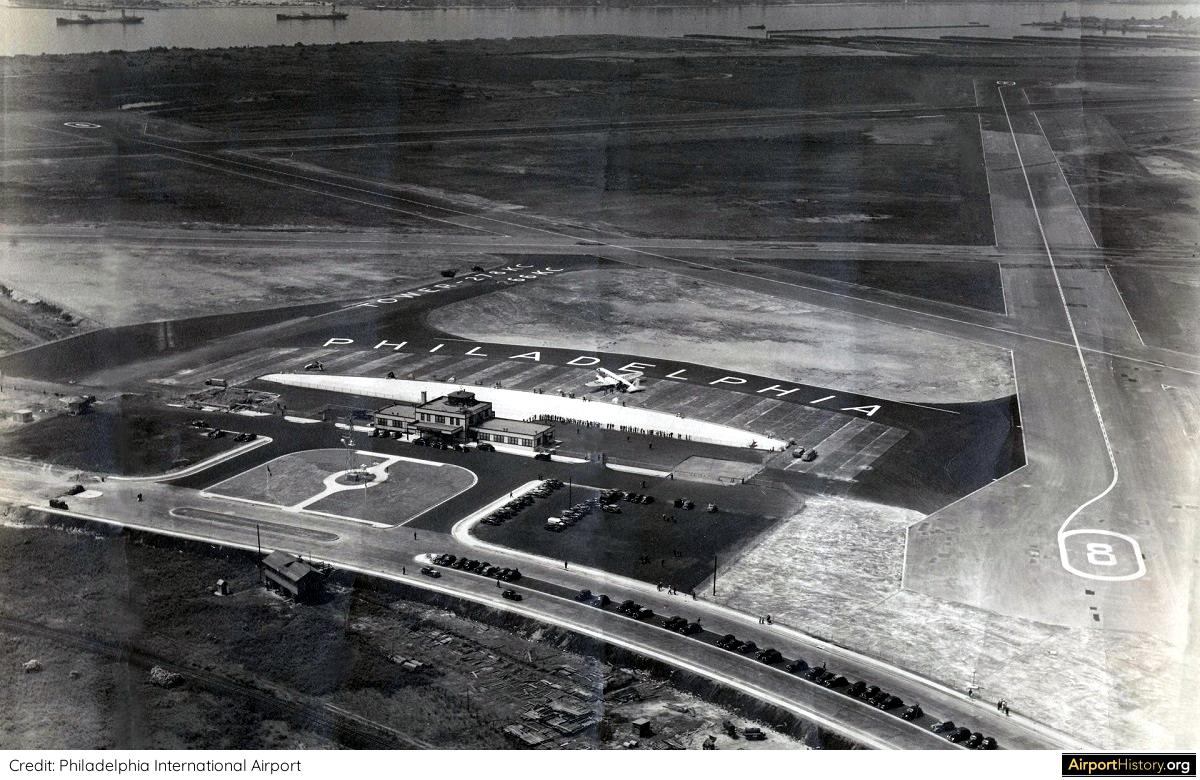 A fantastic 1940 aerial view of the newly opened Philadelphia Municipal Airport. The airport's location was excellent with waterways, railways and highways all being nearby. The terminal building was a structure made of wood and cost USD 110,000.
WORLD WAR II CLOSURE

Things came to a halt on December 23rd, 1943 when the Federal Government ordered the airport's closure for security purposes during World War II, rendering America's then-third largest city without a civil airport.

The first civilian airport to open in Philadelphia after the war was the new Philadelphia Northeast Airport, a redeveloped wartime facility, which was dedicated on July 1st, 1945.

REOPENING AND INTERNATIONAL STATUS
​
Only a few days later, the wartime ban on the use of what was now called Philadelphia Southwest Airport was lifted and the airport reopened for business a few months later on October 20th. Then-Mayor Bernard Samuel had the intention to develop both airports, arguing that each had its own unique advantages.

The airlines, however, preferred Southwest and by December, all five major airlines had transferred their operations there. A USD 2.5 million airport improvement plan was launched to bring the airport up to modern specifications, such as improved runways and expansion of the terminal building which included customs facilities and shops. 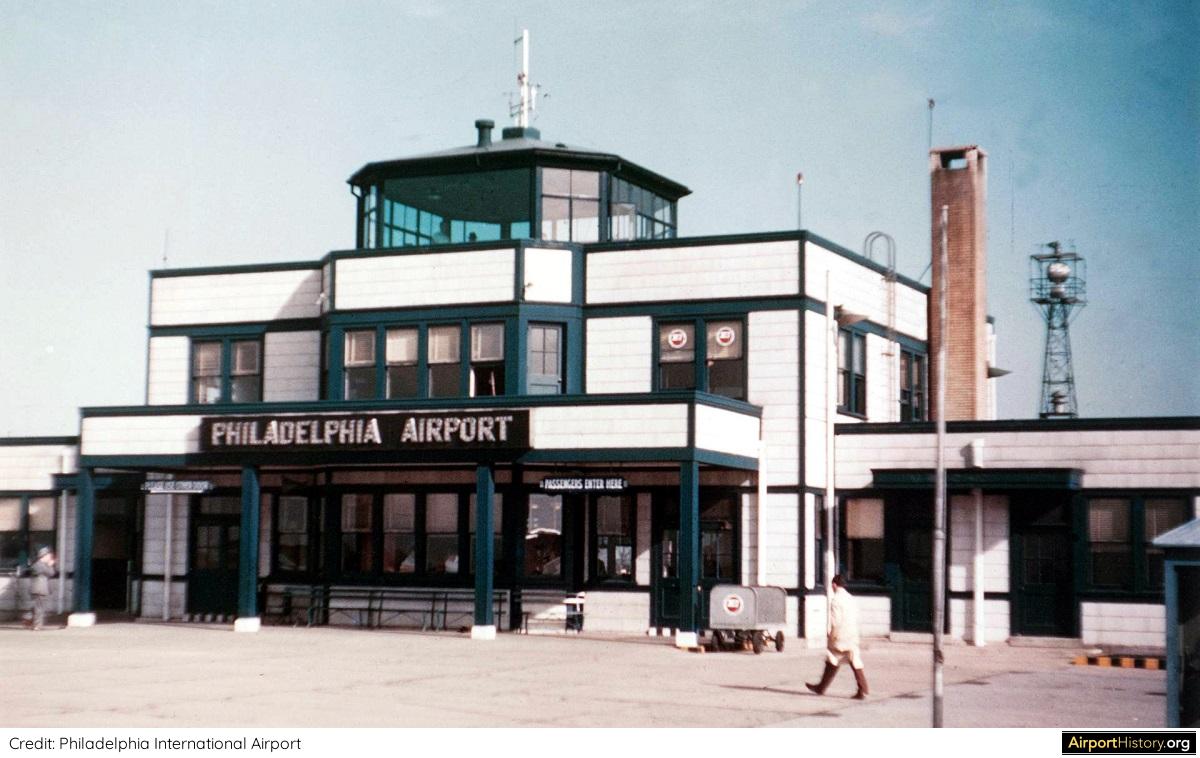 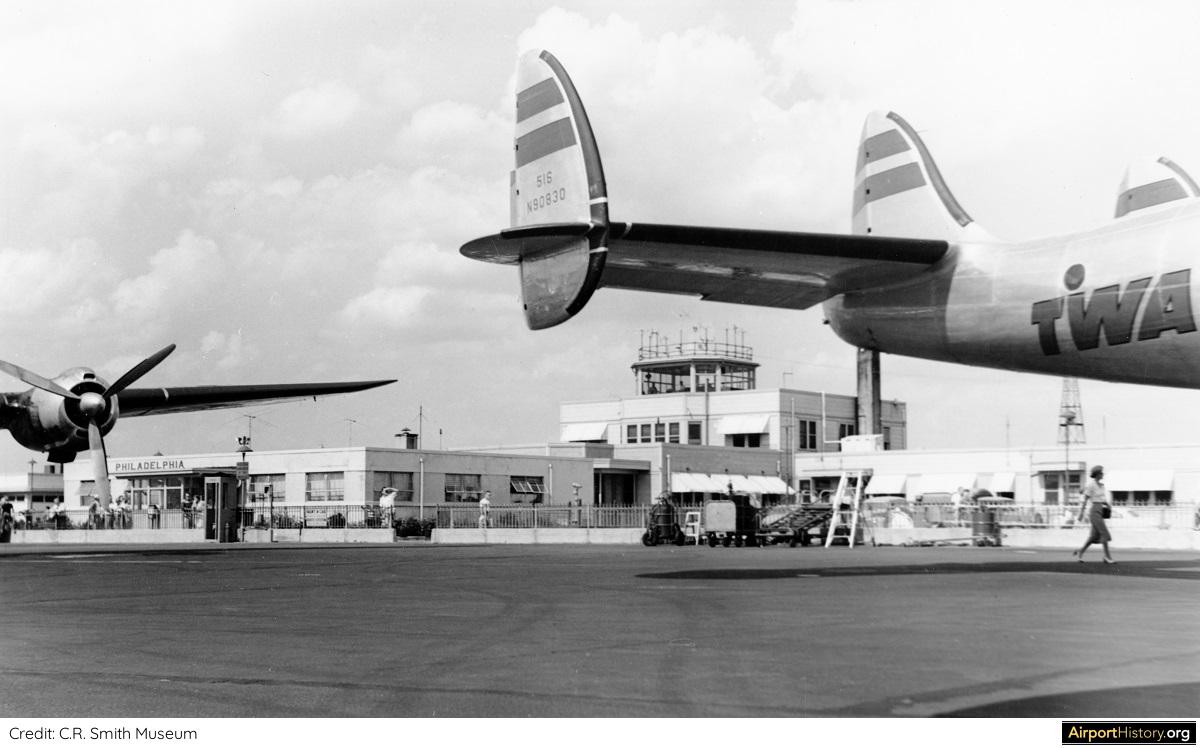 A late 1940s airside view of the terminal building, which by now had been expanded with new sections. The integration of shops made the Southwest Airport the hub of excitement attracting members from the community and visitors from faraway places.

A NEW TERMINAL FOR A NEW ERA IN AVIATION
​
With post-war aviation booming, the then-terminal and the short runways quickly became inadequate. At the time, Philadelphia was the third most populous city in the US and the country's third largest industrial area.

In 1948, Philadelphia handled 250,000 passengers. It was forecast that by 1950, the airport would handle 400,000 passengers; 400 flights a day, with one flight taking off or landing every minute during the busiest hour. In addition, Philadelphia was the alternate for New York in case of bad weather, which could add an additional 50-100 flights a day.

In 1950 construction started on a new USD 15 million multi-level terminal building. The terminal, designed by architects Carroll, Grisdale & Van Alen, took 2.5 years to construct, was 1,100 feet (335 meters) long and was designed to handle 2 million passengers annually. The two piers or fingers loading docks were 525 feet (160 meters) long and accommodated 10 gates each. The expansion was finally dedicated on December 12, 1953.

The terminal was unique at the time as it contained many commercial facilities. This included a restaurant seating 400 guests, coffee shops, cocktail bars, snack shops, vending machines, telephone and telegraph booths, a beauty parlor, binocular machines and pinball machines. Eventually, concessions would comprise 60-70% of all airport revenues of the airport, a spectacular percentage for those days, and even nowadays a respectable figure. 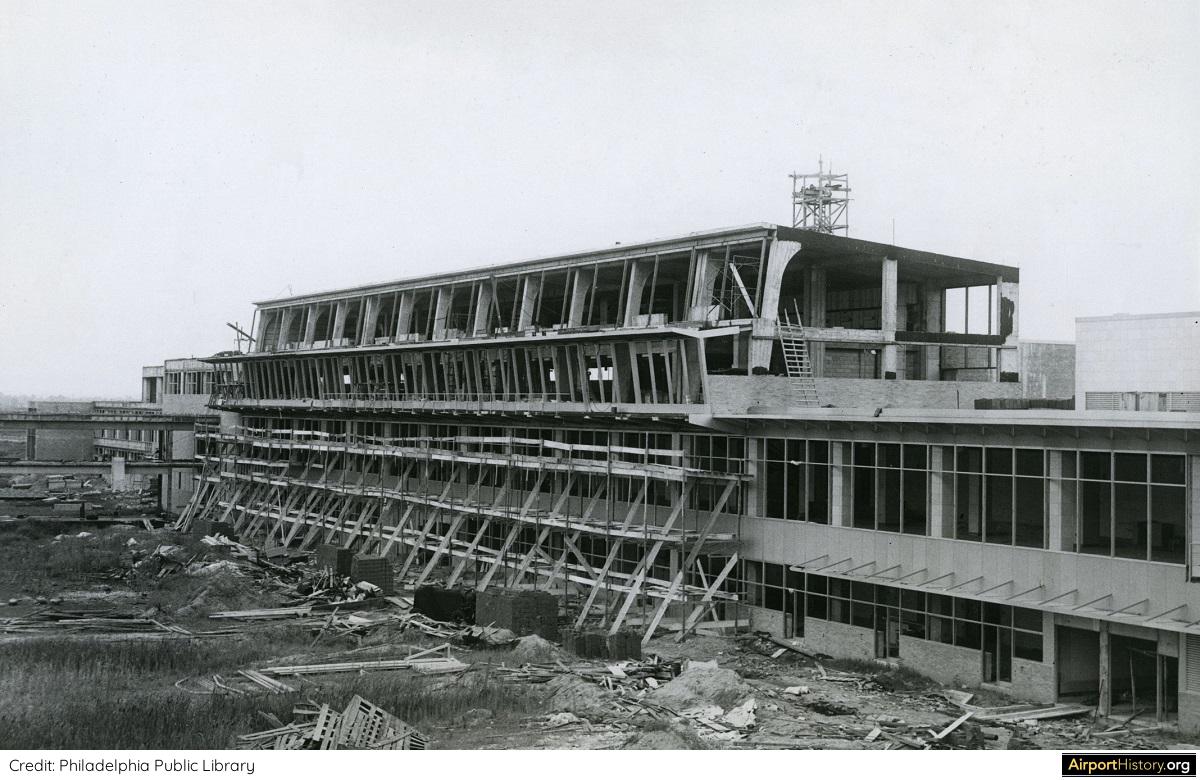 The new terminal building under construction photographed in the summer of 1952. Construction of the terminal cost USD 8 million with access roads, platforms and taxiways costing another USD 7 million. 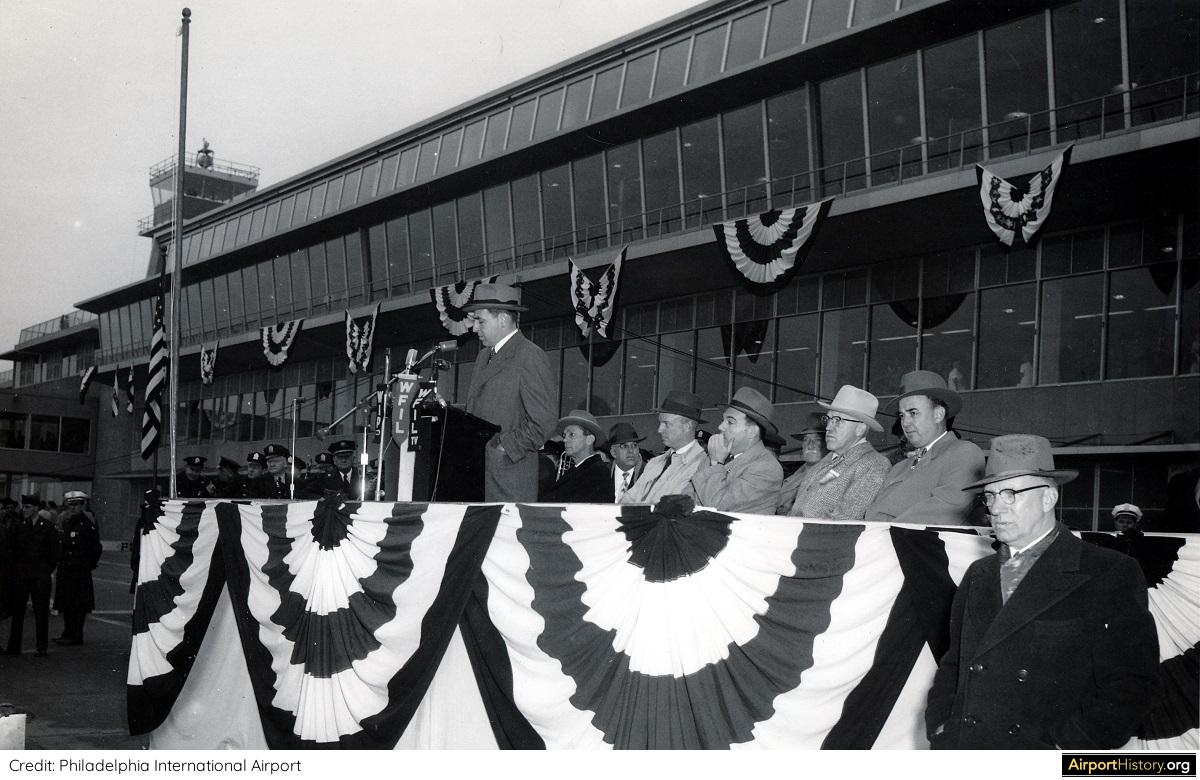 Philadelphia Mayor Joseph S. Clark dedicated the new terminal on Friday, December 12, 1953, which unfortunately turned out to be a rainy day. 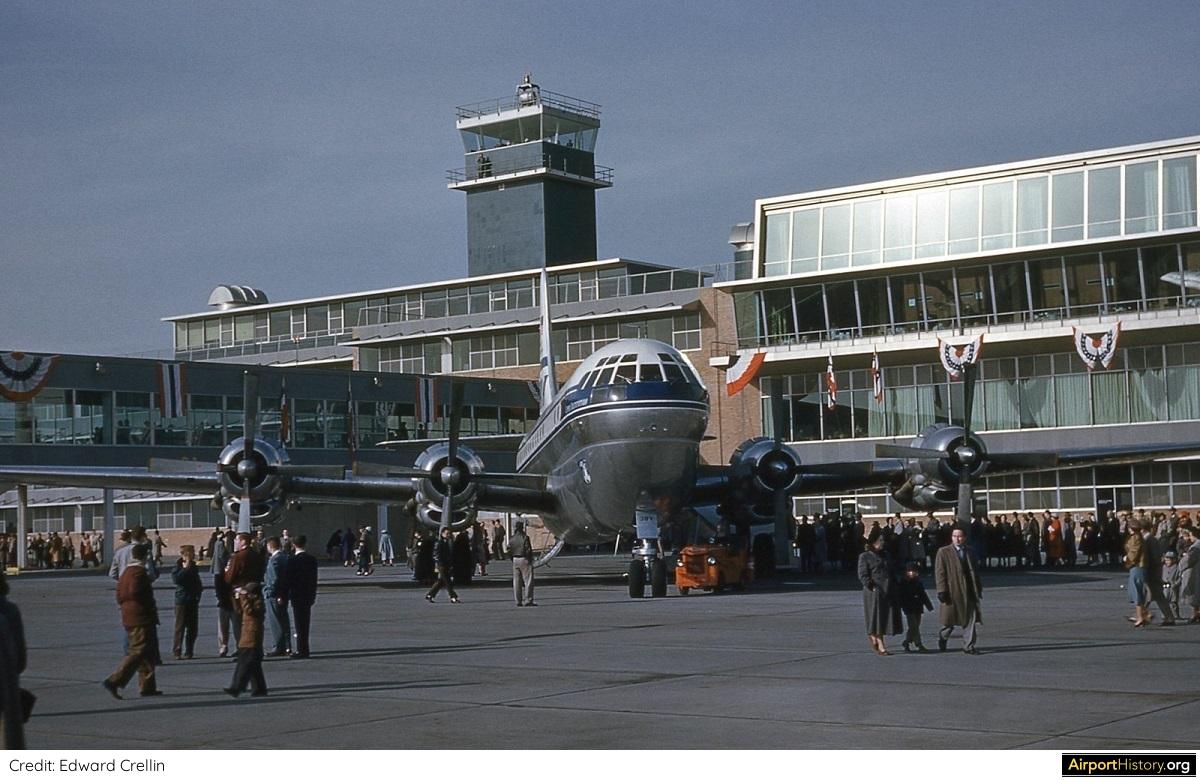 Following the opening of the new terminal on Friday, December 12th, an aviation exhibit was held as part of the 50th anniversary of powered flight by the Wright Brothers on December 17th, 1903. Thankfully, the weather had improved! The tower was put into operation later than the terminal building as the Civil Aeronautics Administration lacked funding for moving the equipment from the old to the new tower. 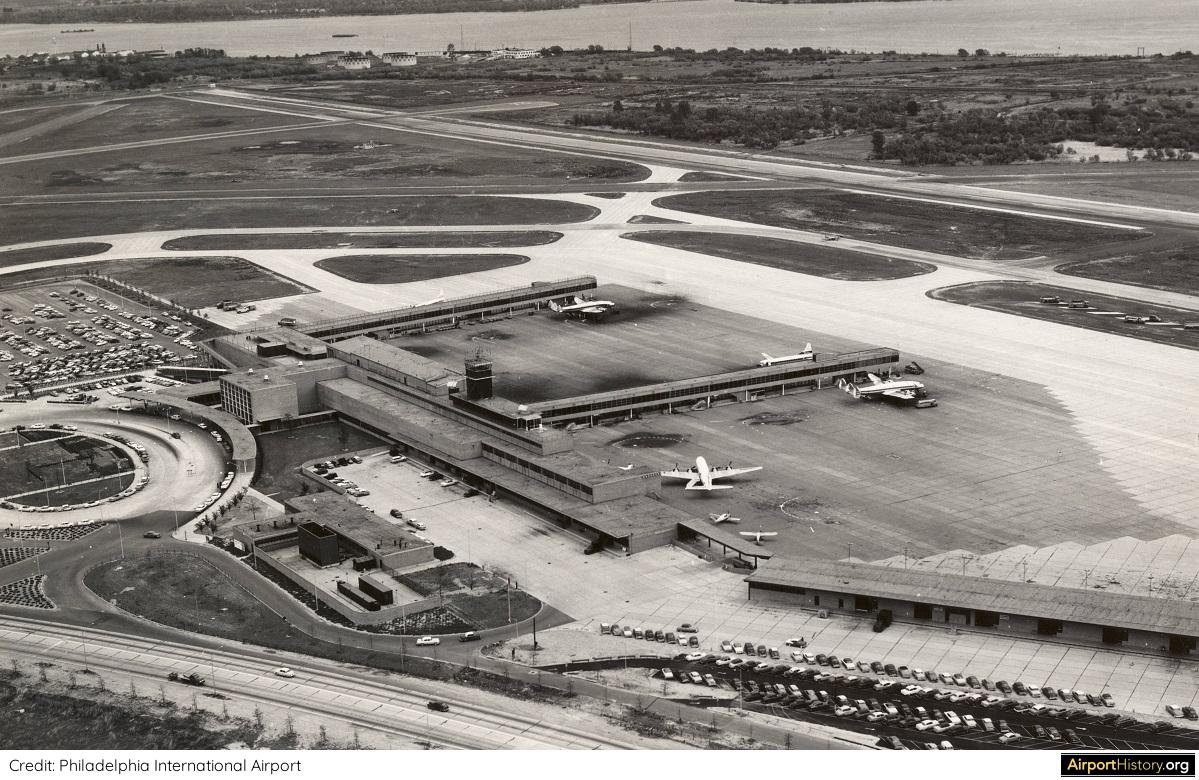 A 1956 aerial image of the terminal building looking southeast. The main runway was lengthened to 7,400 feet (2,255 meters) in order to accommodate the largest aircraft of the time. 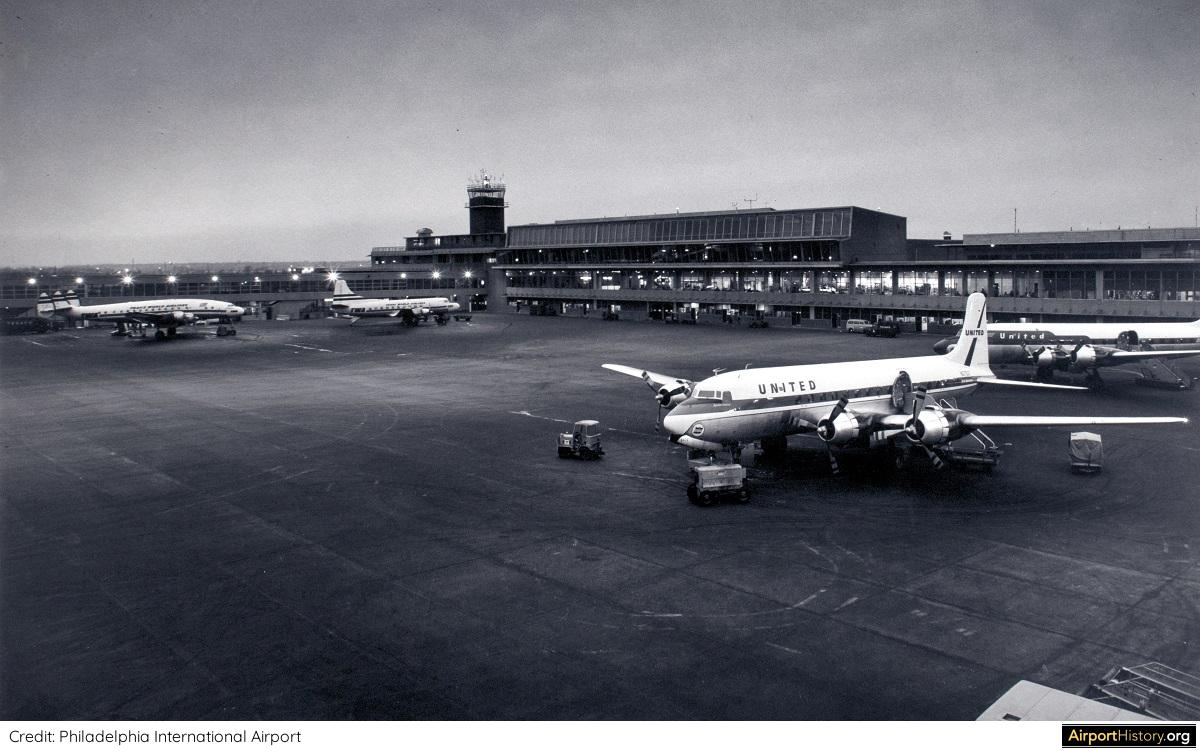 See next part: PHL heads into the Jet Age