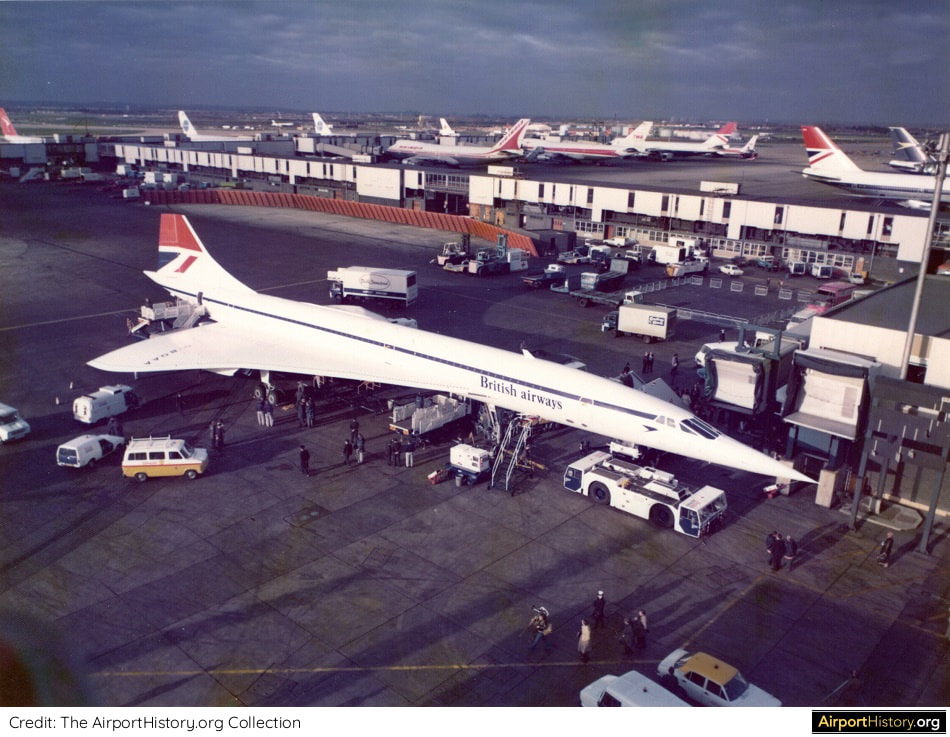 British Airways Concorde G-BOAA at London Heathrow Airport in 1976.
Published: October 6th, 2019
Updated: January 31st, 2020
In this article, we will examine how airports in the late 1960s prepared for the supposedly inevitable takeover of supersonic transport aircraft!

Dawn of the supersonic age

​In the late 1960s, the expectation was that, by the late 20th century, the majority of long-haul passengers would fly in supersonic aircraft. At the time, all major aircraft manufacturers in Europe, the US and the USSR were developing concepts for 'supersonic transport aircraft', or SST.

The largest SST model, the Boeing 2707 would carry 300 passengers, which was 60 passengers less than the first 747 in a three-class layout. The Anglo-French Concorde carried between 92 and 128 passengers.

In anticipation of this development, Boeing designed the 747 with the characteristic hump, so that it could be easily converted into cargo aircraft if its design became obsolete for passenger transport. 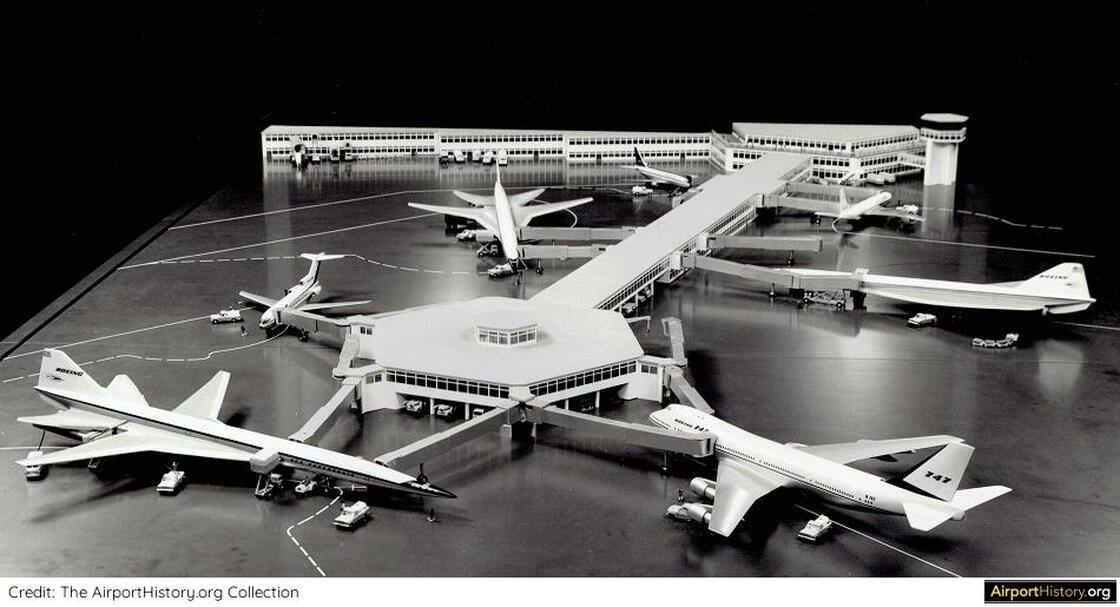 A 1967 Boeing image showing a contemporary 1960s airport concourse, surrounded by existing Boeing models at the time: the 707, 727 and 737 as well as its upcoming Boeing 747 and the supersonic Boeing 2707. With a length of 306 feet (93 meters), the Boeing 2707 was quite a bit longer than the 747 at 231 feet (71 meters).
​Despite their spectacular design and performance characteristics, SSTs were designed to make use of existing runways and terminals. ​ However, SSTs did still have an impact the design of airports, or to be more specific, their location. SSTs were extremely noisy. Hence, new airports that were expected to handle SSTs were often planned far away from the cities they served.​

NEW YORK
​
Being a world city and the primary US international gateway, New York was destined to become the SST capital of the world, with both US and foreign flag carriers operating supersonic service to cities and around the globe.

New York's Kennedy Airport was the main base for Pan Am and TWA, America's most prominent international airlines at the time. Both airlines had options on Boeing's SST as well as the Anglo-French Concorde. In the late 1960s, both airlines commenced expansion projects of their terminals, that were prepared to accommodate the new generation of wide-body aircraft and SSTs.

Read our full history on New York's Kennedy Airport. Read more about the early days of the Pan Am terminal and TWA Flight Center.

​The "Everglades Jetport" would have been five times larger than New York's Kennedy Airport.

MIAMI
​
Miami, being the gateway to Latin America and a major base for long-haul Pan Am flights, was expected to become a major SST hub. Miami International Airport was located in the middle of built up areas and SST noise was expected become a major issue.

In 1968, the decision was taken to build a huge new airport in the Florida Everglades, which planners envisioned would become a major intercontinental SST hub. The "Everglades Jetport" would have been five times larger than New York's Kennedy Airport. ​ 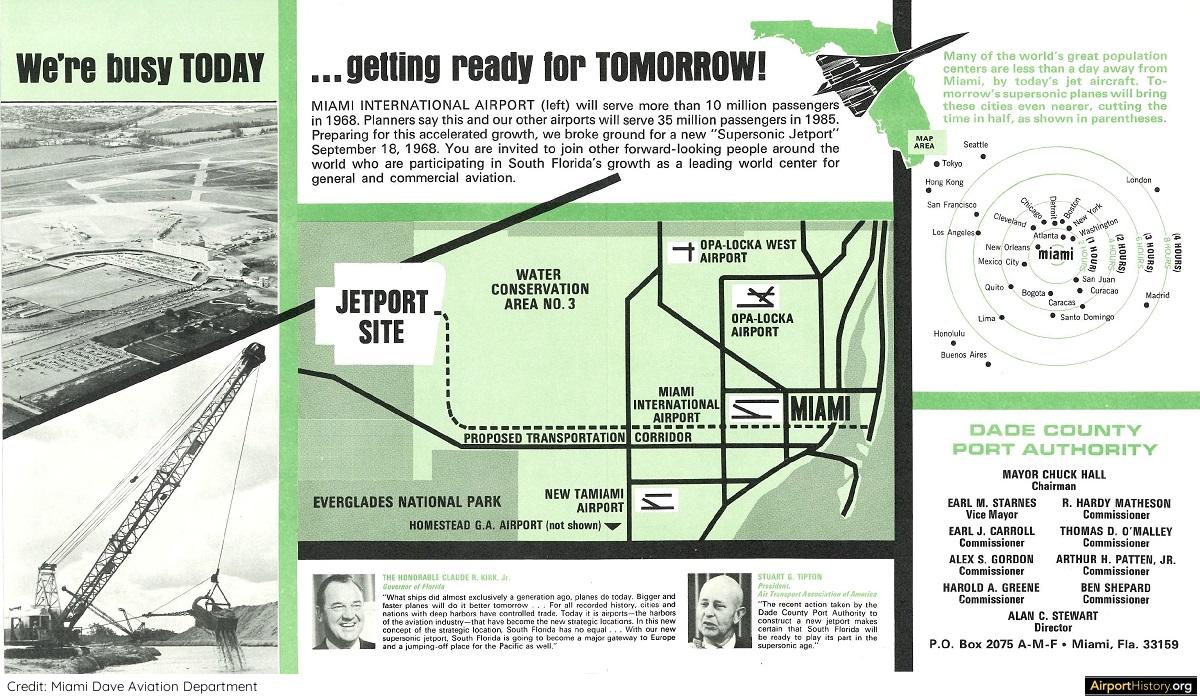 Snapshot from a 1968 brochure announcing the Everglades Jetport project. The airport would have had six runways in its final layout and would have been five times bigger than New York's Kennedy Airport.

​LOS ANGELES
​
As the third largest US city at the time (now second largest), Los Angeles was surely to become a major destination for SST jets. Due to the location of LAX, noise considerations were also a major concern, even though most take-offs would have been over the ocean. 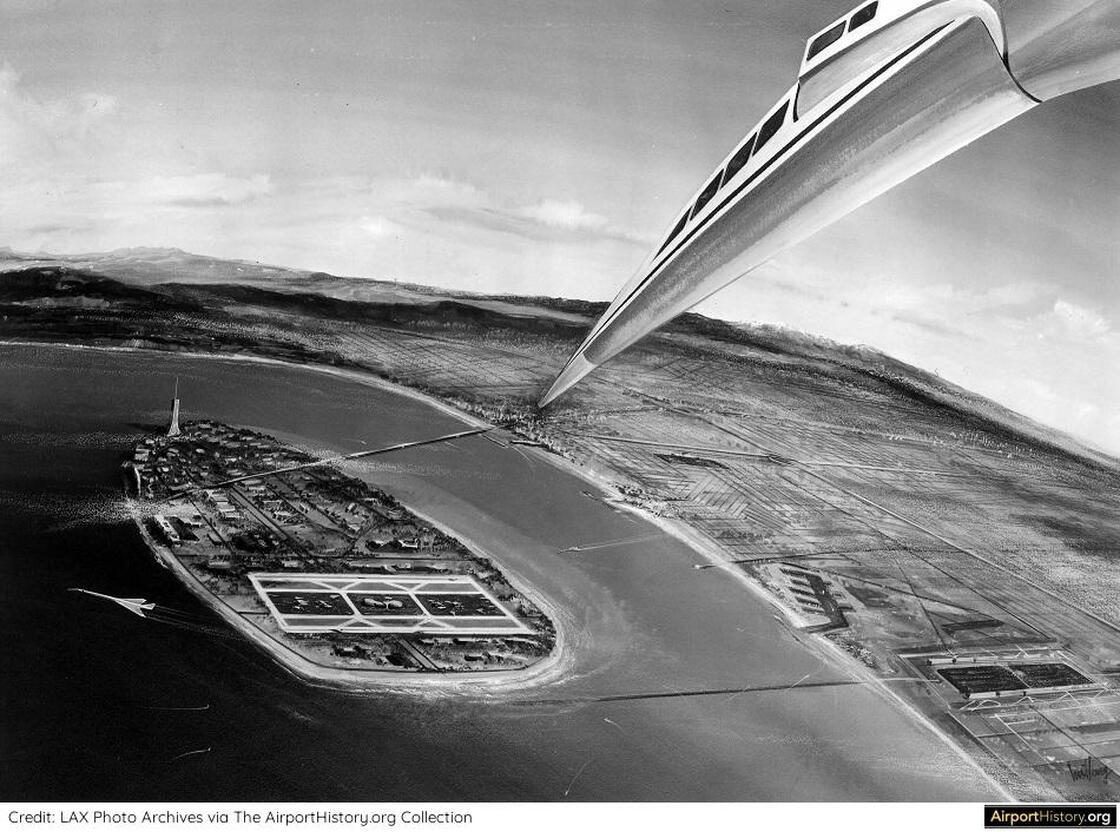 An artist's impression of the supplemental offshore airport serving LAX. The airport would be connected to the existing airport (bottom right) by means of a tunnel. The concept never got beyond the planning stage.

​With the advent of the Jet Age and SSTs, several European capitals, such as London, Paris, Amsterdam and Copenhagen sought to build new airports.

The master plan report mentions that the planners made a special trip to Boeing in Seattle to view the mock ups of the Boeing 2707 (as well as the 747) in order to obtain first-hand knowledge of the problems and possibilities of handling the new generation of aircraft.

Although SST noise was a concern, it was a bit less pressing than at other major airports around the nation. Due to its location bordering San Francisco Bay and its runway configuration, most SST flights would have been able to both land and take-off over the Bay. 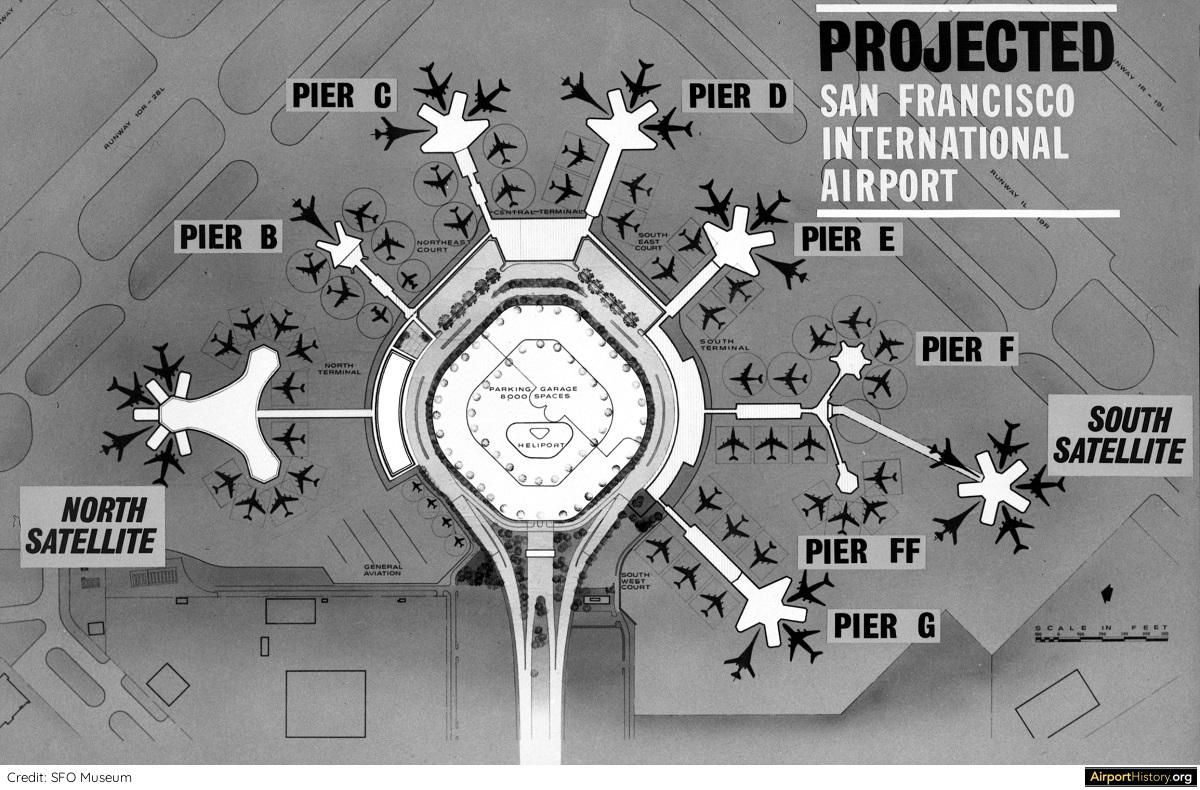 A 1967 draft master plan for the future development of San Francisco International Airport. It's evident that planners considered the SST in their plans with several stands being suitable for this new generation of aircraft. Can you spot them?

HOUSTON, KANSAS CITY, DALLAS
​
Contrary to the coastal US cities, most cities in the Midwest and South had an abundance of space to build new airports.
In the late 1960s and early 1970s, a new generation of large-scale 'jetports' opened in the American heartland: Houston Intercontinental (1969), Kansas City (1972) and Dallas-Fort Worth (1973).

​MONTREAL
​
​​In the late 1960s, at the height of SST development, the Canadian city of Montréal was one of North America's most important international gateways--many inbound flights from Europe on their way to cities like New York, Chicago and Houston made a stopover at Montréal's Dorval Airport.

The airport was quickly becoming saturated and planners started looking ahead. They assumed that traffic would grow with 15% annually into the foreseeable future and that the majority of people would be transported in SST aircraft.

Based on that assumption, it was decided to build a vast new airport one hour north-west of Montréal. In its final layout, the airport would boast six runways and six passenger terminals. A large buffer zone was established around the airport to ensure noise would never become an issue. The first phase of Montréal Mirabel Airport opened on October 4th, 1975. 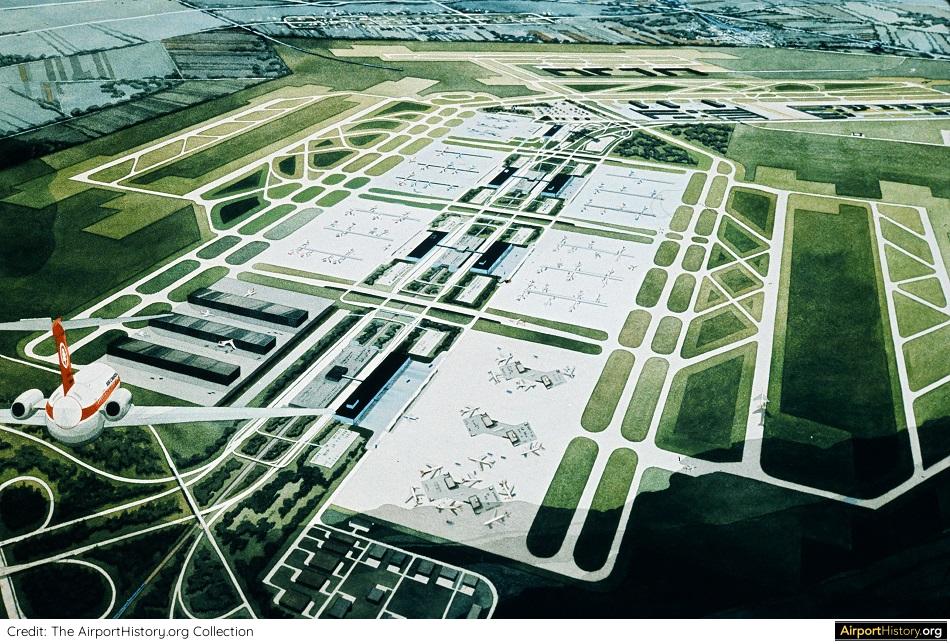 A fantastic artist's impression of Mirabel in the final layout. The airport would boast six runways, six passenger terminals and vast cargo and maintenance areas. The first terminal to be built was located in the top middle of the image.

Contrary to the American heartland and Canada, space in Europe comes at a premium. The development of large-scale greenfield airport projects is generally very difficult in Europe.

With the advent of the Jet Age and SSTs dominance on the horizon, several European capitals, such as London, Paris, Amsterdam and Copenhagen sought to build new airports.

With traffic booming in the 1960s, both Heathrow and Gatwick were thought to reach capacity well before the end of the century.

Heathrow, London's primary airport, was located in the city's western suburbs and aircraft noise was becoming a major concern. In addition, with traffic booming in the 1960s, both Heathrow and Gatwick were thought to reach capacity well before the end of the century. Hence, the construction of a third London airport was deemed necessary.

In 1971, the government selected Maplin Sands, located in the Thames Estuary, as the location for a new four-runway airport. With takeoffs and landings taking place over open water, London Maplin, would have offered an effective solution for the SST noise issue.

However, in late 1973, the Maplin scheme was abandoned due to rising construction costs and falling passenger demand due to the oil crisis. ​

We'll be publishing a separate article on the search for a third London airport in the near future. 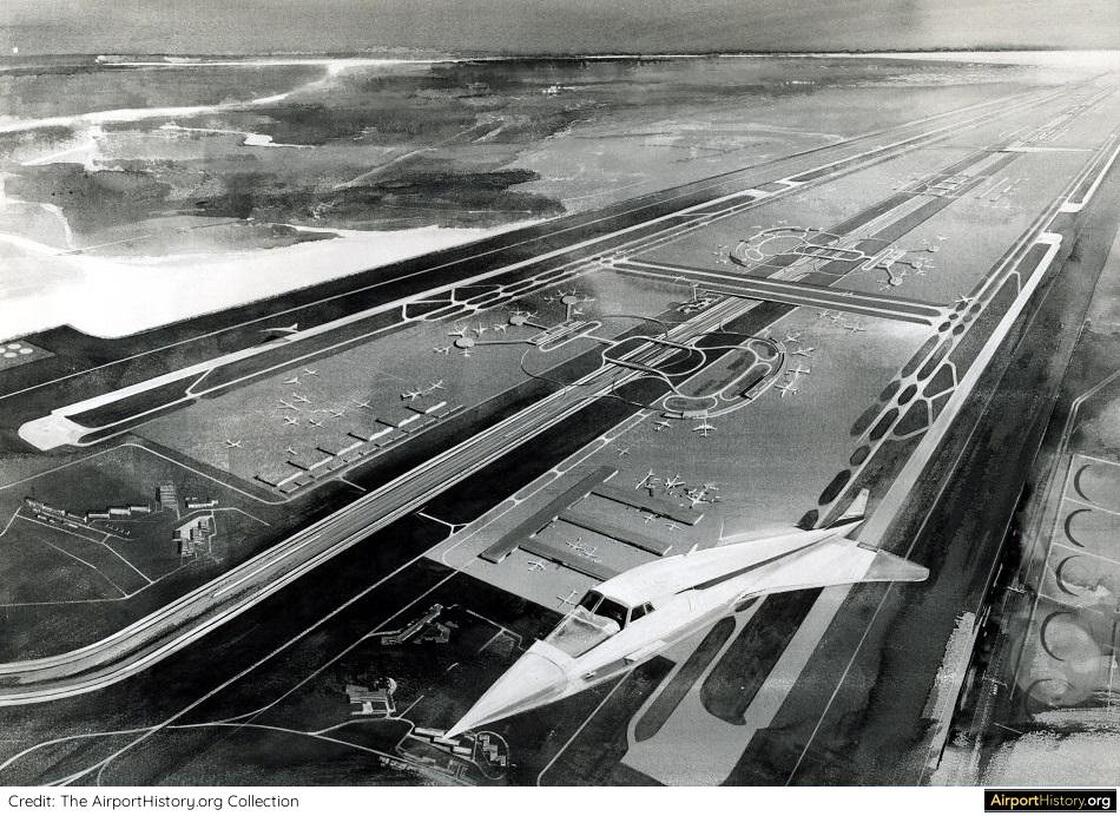 A rare artist's illustration of the unbuilt London Maplin Airport, which was planned to be built on reclaimed land in the River Thames estuary.

​Similar to New York and London, Paris was bound to see plenty of SST operations. In 1964, Air France, declared the intention to buy eight Concorde aircraft. Air France's home base, Paris Orly Airport, was nearing capacity and was located in the middle of built up areas, making it unsuitable for the operation of noisy SSTs.

In 1964, the French government gave the green light to build a new Jet-Age airport north-east of Paris. Planning work on Roissy Airport, named after a nearby village, started in 1966, when it seemed sure that 747s and SSTs would soon rule the skies.

In its final layout, the airport would boast five runways and five massive, futuristic, round terminal buildings, the perfect setting for the SSTs. Seemingly to match the high speeds in the air, the airport's design was optimized for high-speed circulation, loading and unloading of aircraft. Roissy, renamed Paris Charles de Gaulle Airport, opened for service in March, 1973.

A fantastic artist's impression of Phase 1 of the "future" Paris de Gaulle Airport, an airport that was designed with both SSTs and 747s in mind.

RIO DE JANEIRO
​
In the late 1960s and 1970s, Brazil enjoyed very high rates of economic growth. People started to speak about the “Brazilian miracle”. During this period, the government made large scale investments in infrastructure and industry.

​It's within this context that in 1967, a study into the large-scale expansion of Rio's Galeão Airport was commenced. As Brazil's major tourist hub, Rio de Janeiro was expected to see its fair share of SST service. The government engaged Aéroports de Paris--the same organization that designed the brand new Paris de Gaulle Airport--to design a state-of-the-art gateway to Brazil. 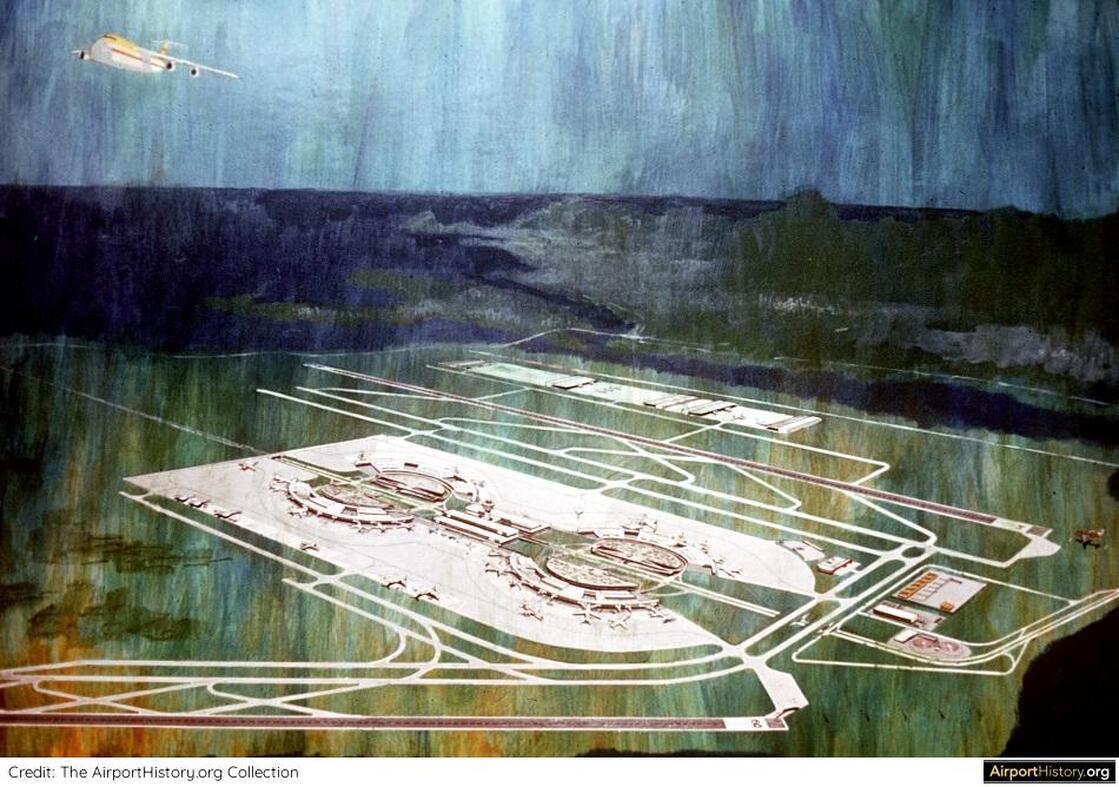 An artist's impression of the expanded Galeão Airport. If you look closely however, you can count four Concordes on the ground. Note the similarity of the taxiway design to that of Paris de Gaulle.
Click here for Part 2, where we will continue the supersonic story and see how things actually worked out for the SST and how SST service was at airports around the world!