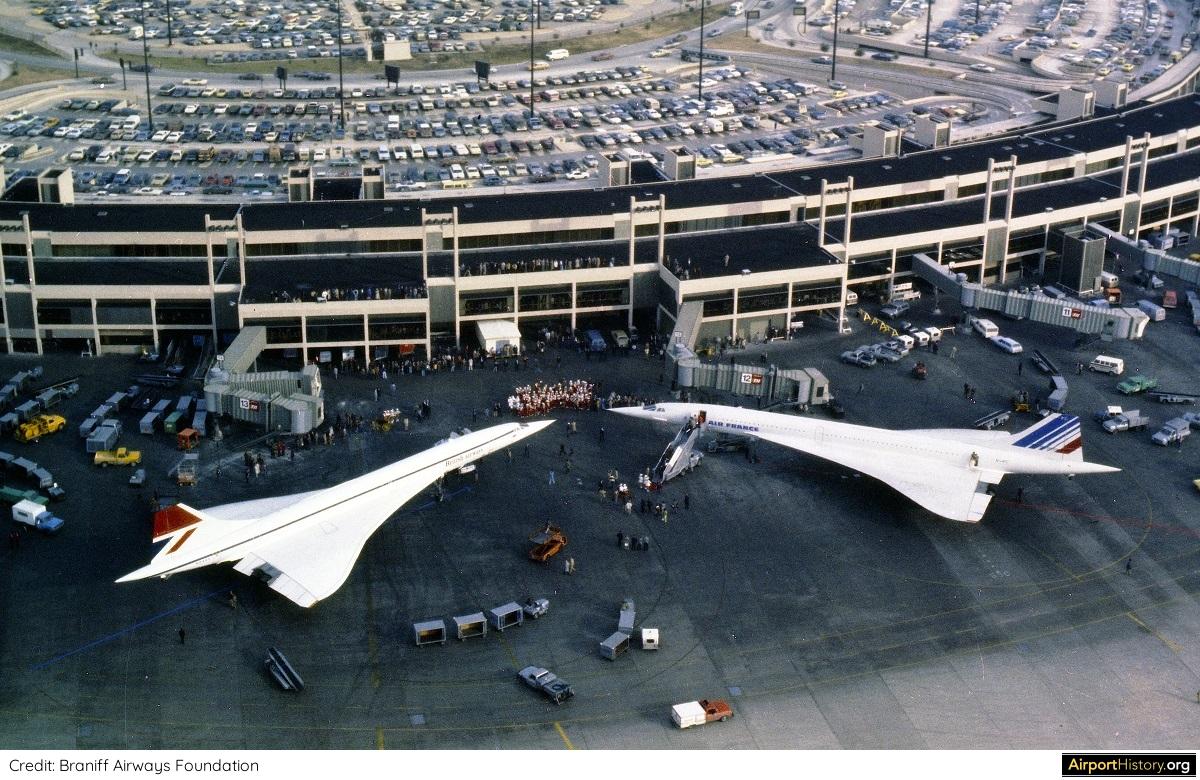 Concordes of both Air France and British Airways visit Dallas Fort Worth Airport on the day of Braniff's inaugural Concorde service to Washington, Paris and London.
Published: March 5, 2019

The future that wasn't

END OF THE SST

As we learned previously, in the 1960s, the expectation was that most people would traverse the oceans and continents by supersonic aircraft by the late 20th century.

​In order to accommodate this development, many cities planned expansive new airports far away from urban areas in order to deal with the noise generated by supersonic transport (SST) aircraft.

​However, by the early 1970s, things looked very different. In 1971, funding for the American SST program was discontinued due to environmental concerns and design issues.

The smaller Anglo-French Concorde did fly however, making its maiden flight in March 1969, as did the Russian built Tupolev TU-144. In the 1960s, most of the world's western airlines had options on Concorde. However, due to flat traffic growth and deteriorating finances, most airlines had cancelled their options by 1973.
SST AIRPORTS

Several of the mega SST airports discussed in Part 1, such as London Maplin and the Everglades Jetport near Miami were cancelled. Others schemes were realized, but never got to see scheduled Concorde service. Ironically, two of the "Concorde capitals", London's Heathrow Airport and New York's Kennedy Airport were constructed just after WWII (not exactly Supersonic-era airports!).

In the second part of Airports for the Supersonic Age, we revisit the airports from Part 1, and see what came to be of their SST ambitions, for better or for worse.

​​​The vast Paris de Gaulle Airport (1974) was the only airport designed for SSTs that actually saw frequent Concorde service.

​Air France operated out of the International Arrivals Building at Kennedy airport, which by that time did not match the glamour of the Concorde. In 1998, Air France moved to the rebuilt Terminal 1. 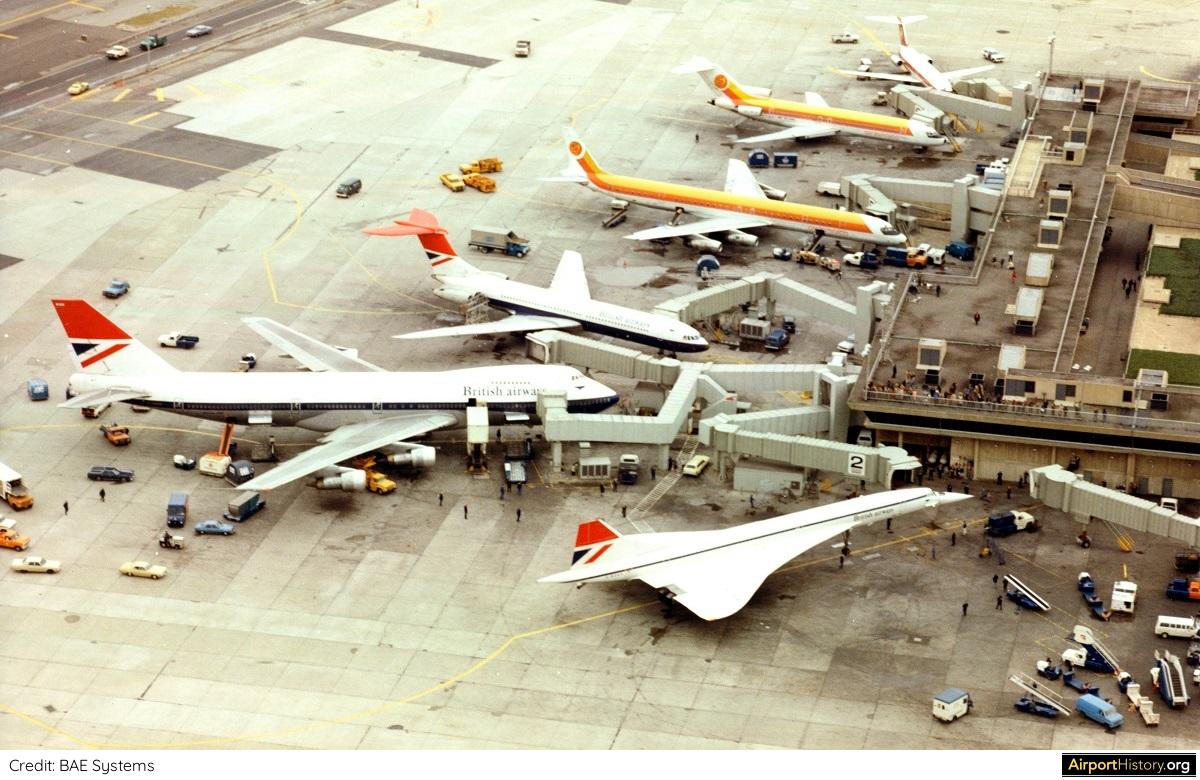 An aerial image of British Airways' Terminal 7 taken on November 22nd, 1977, after completion of the first Concorde flight. In the early years, a one-way ticket from JFK to Heathrow cost roughly USD 1,500. How cool would it be to be one of those observers on the roof!
WASHINGTON

Washington's vast Dulles Airport, opened in 1962, predates the SST. However, due to its then-remote location in the Virginia countryside, it was perfectly suited to host Concorde. The Virginia Senate was the first to clear Concorde flights on January 29th, 1976 and on May 24th, 1976, Air France and British Airways simultaneously began thrice-weekly service to Washington Dulles from their respective home bases.

​Logically speaking, supersonic air service between the main political power centers of the late 20th century—Washington, London and Paris— made sense. However, the routes did not prove to be viable in the long run.  Air France cancelled its Washington service in October 1982, while British Airways discontinued the service in November 1994. 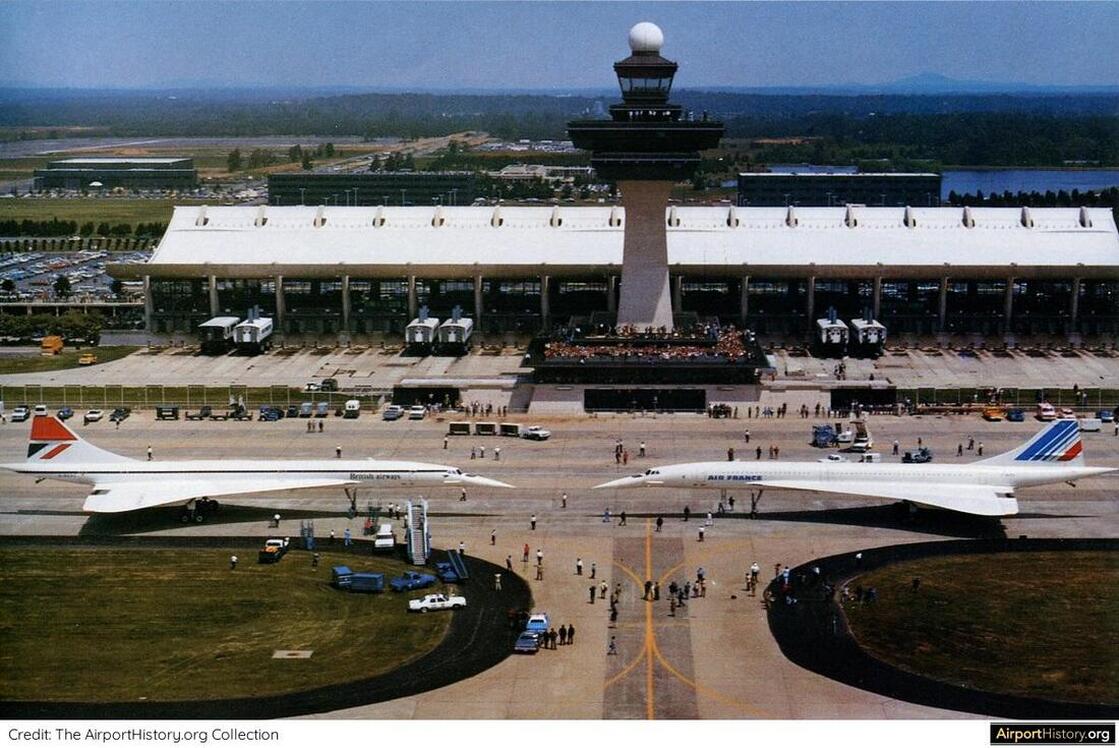 A legendary staredown! This image was taken on May 24th, 1976, when both Air France and British Airways began thrice-weekly service to Washington Dulles.
MIAMI

After cancellation of the Jetport project, Concorde had no other option than to land at the existing Miami International Airport. Miami is one of a handful of airports that had enjoyed Concorde service for a number of years. Commencing in March 1984, British Airways served the city three times a week, through Washington.

The flight took 6 hours 35 minutes, including a 50-minute stop in Washington. The service was discontinued in March 1991, due to a lack of demand, leaving the daily 747 service between Miami and Heathrow. In early 1991, the round-trip fare for the Concorde was USD 7,566 from Miami to London, compared with round-trip first class fare of USD 6,577 on a British Airways 747. 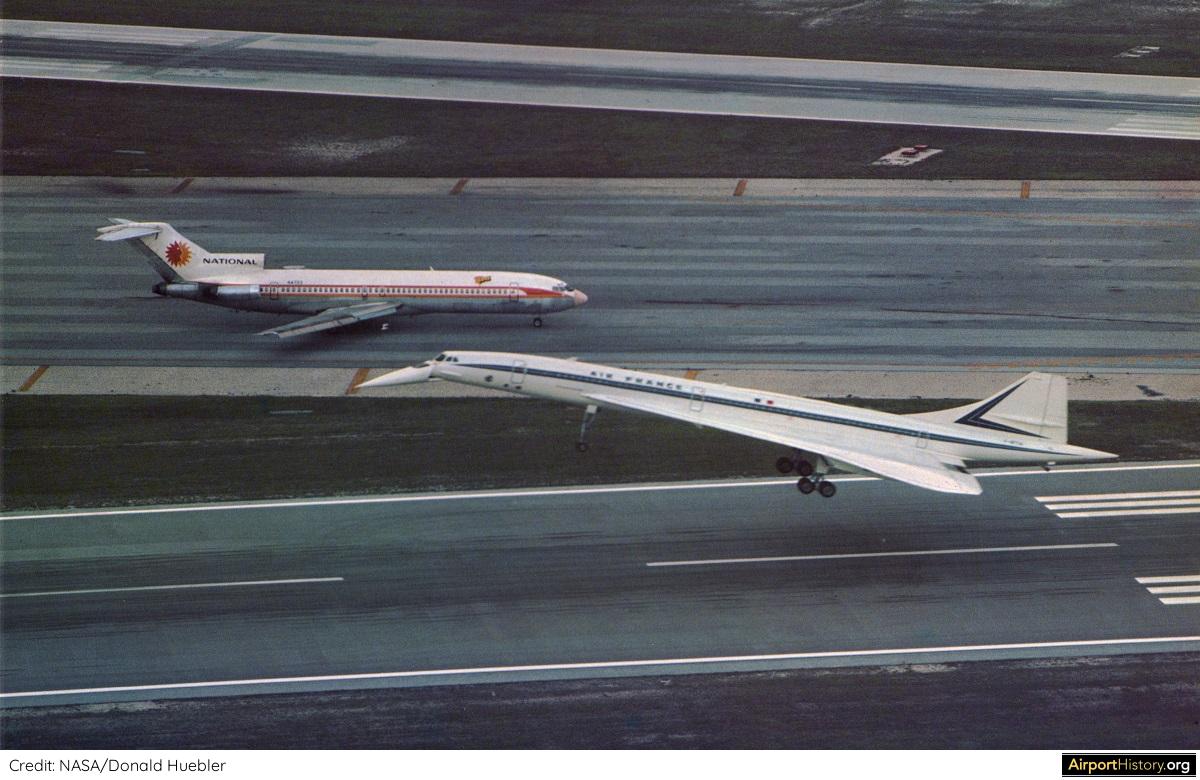 An Air France Concorde is touching down at Miami International Airport during a promotional tour in 1974. By the time British Airways commenced scheduled services in 1984, much of the original environmentalist opposition to the costly aircraft had subsided.
ORLANDO

Not featured in Part 1 of our series, the city of Orlando opened a state-of-the-art passenger terminal complex at the site of the former McCoy Air Force Base, 10 mikes (16 kilometers) southwest of the city.

While nearby Miami could still fill up a Concorde with pop-stars, models and London investment bankers holidaying in Florida, Orlando was too much leisure-focused to be commercially viable as a Concorde destination. Orlando did see its fair share of promotional visits and charters, including the spectacular landing below. 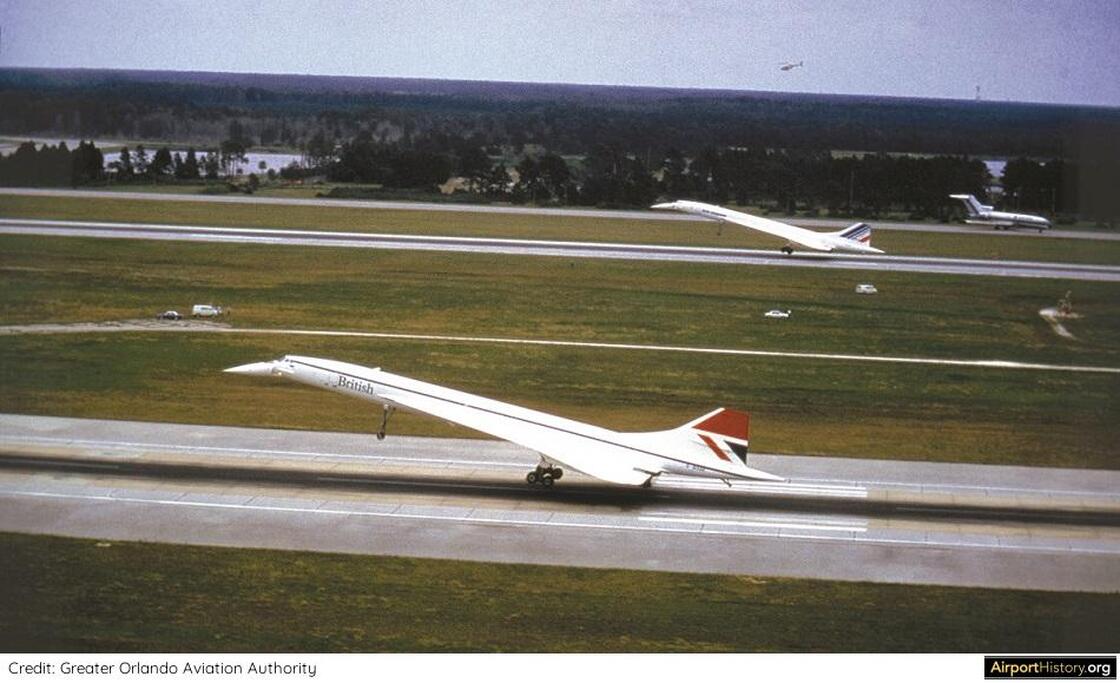 An Air France and British Airways Concorde touch down simultaneously on Orlando's two 12,000-foot (4,000-meter) runways on October 18, 1982, celebrating the opening of Disney's Epcot Center. An estimated 35,000 people came out to see the landing.

When the Concorde made a stopover in the Bay Area during one of its charter flights, it had to do so in Oakland.

The Hollywood crowd, less vocal about environmental causes in those days, would have provided ample demand for service between Los Angeles, London and Paris. However, despite years of battling, the Concorde never would be approved to operate out of LAX.

​Its noise levels, especially on takeoff, were deemed too loud to meet the airport’s stringent noise standards. Moreover, the city's attempt to develop a new airport that could host SSTs did not go anywhere. Of course, local noise concerns were only part of the challenge. Much of the route to Europe would have taken it over land, prohibiting it from flying at supersonic speeds. In addition, a refueling stop in Canada would have been necessary. 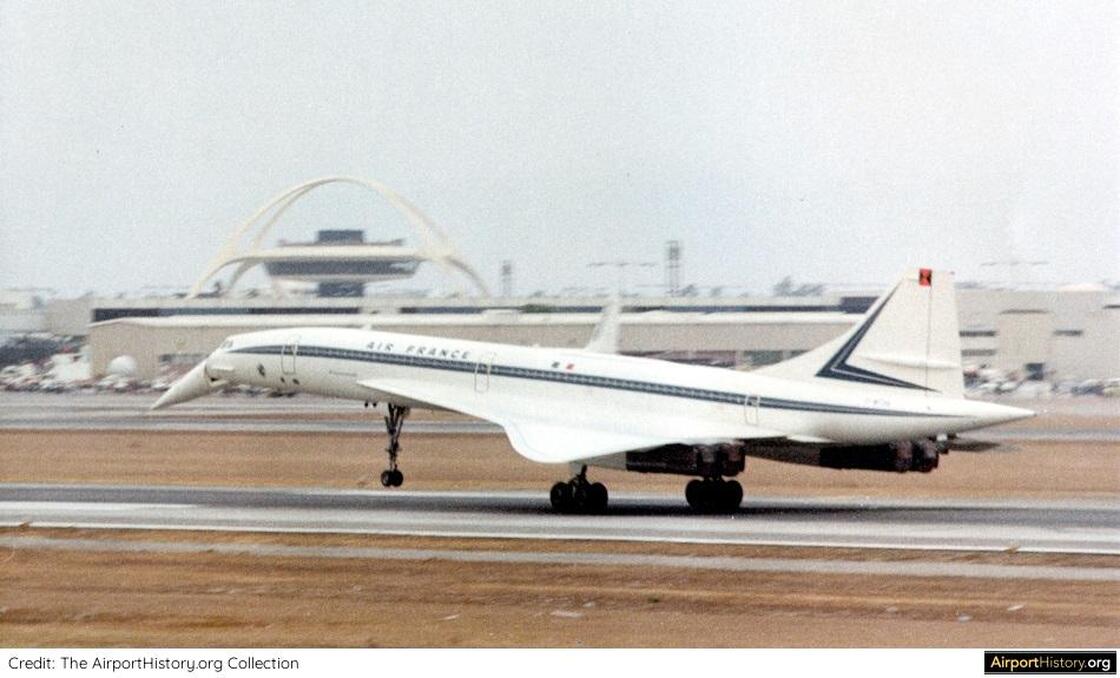 An Air France Concorde visits Los Angeles Int'l on October 23-25, 1974. Its cameo appearance resulted in more than 200,000 sightseers thronging to LAX for a glimpse of the supersonic aircraft.
SAN FRANCISCO

​Contrary to Los Angeles, San Francisco's economy in the 1970s and 1980s would likely not have generated enough demand to sustain luxury Concorde service to Europe. This fact was moot as on November 1, 1977, the San Francisco Airports Commission unanimously adopted noise regulations that effectively banned supersonic jets for good.

When the Concorde made a stopover in the Bay Area during one of its charter flights, it had to do so in (the slightly less glamorous) Oakland.

Nowadays, San Francisco is brimming with busy IT millionaires. If a new generation of quiet supersonic aircraft ever sees the light of day, San Francisco International Airport will see a lot of them! 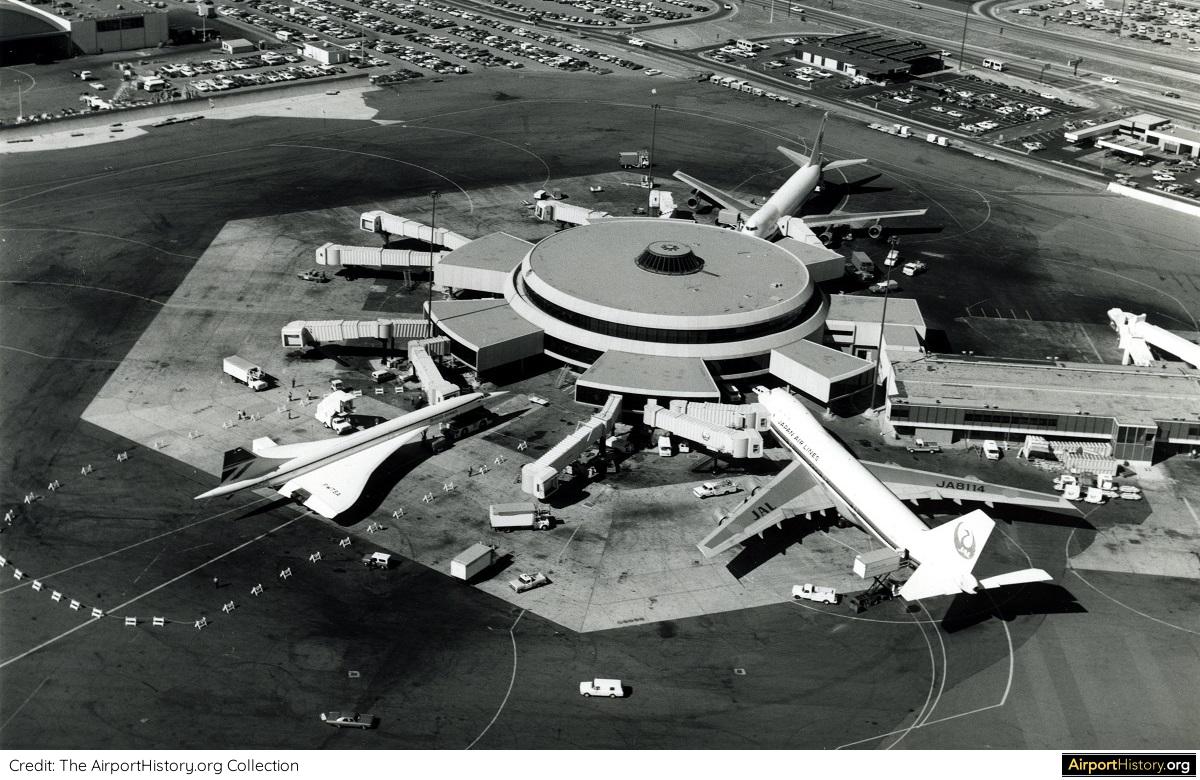 Concorde appears at San Francisco International Airport during a demonstration tour in October, 1974. Concorde was banned from SFO, which is a pity because that fantastic 1970s satellite building complements Concorde very well!

Dallas/Fort Worth International Airport was one of several new mega-sized 'jetports' that opened in the US in the early 1970s. When it opened, DFW was located far away from urban development and was perfectly suitable to host SST service.

Braniff International Airways, based out of Dallas, operated the airplane over the course of one year from 1979 to 1980. The airline used airplanes from both British Airways and Air France to run service between Dallas/Fort Worth International and Europe, with a stop-over in Washington Dulles.

The overland part of the flight had to be carried out at subsonic speeds. The service was cancelled due to a lack of demand with load factors frequently being under 50%. 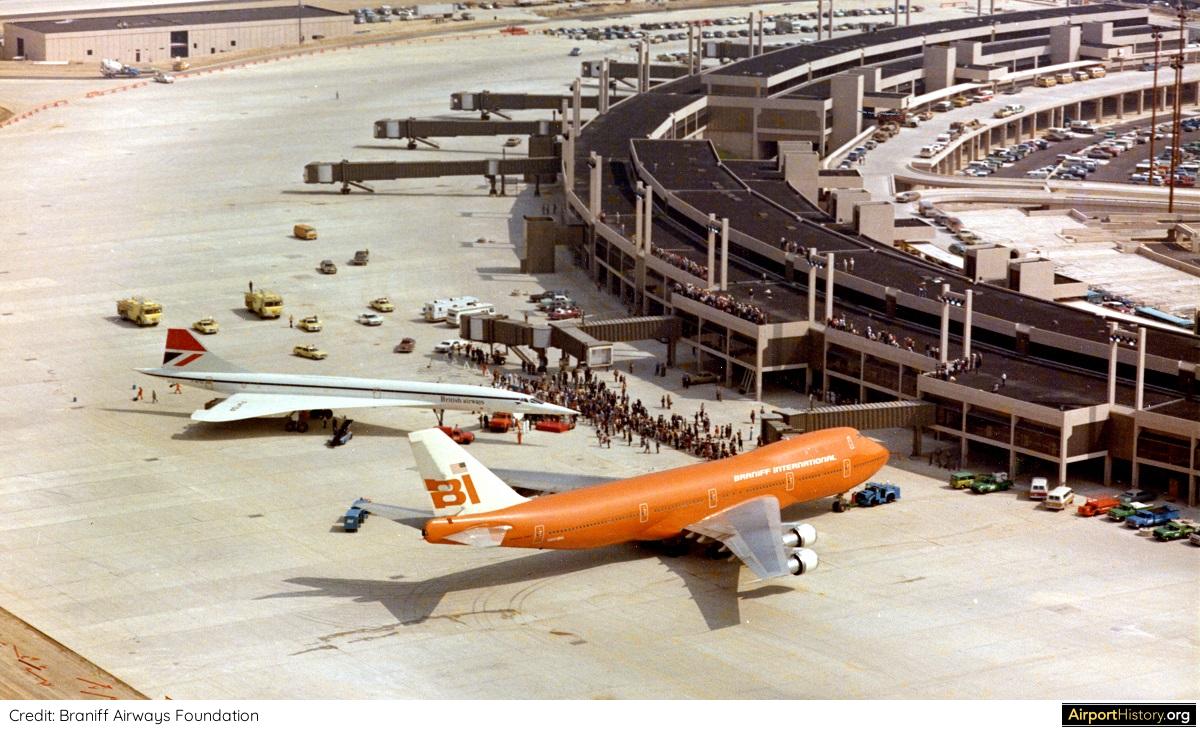 A British Airways Concorde visits the brand new Dallas/Fort Worth Airport during an inaugural event in September 1973.

Being far away from the city and with long runways, Houston's Jet-Age airport was designed for the Supersonic Age. Houston's wealthy oil firms surely would have sustained some scheduled SST routes to other oil capitals at the time, such as Caracas, Amsterdam and Lagos.

However, at the time, all Concorde routes led to London and Paris. And similar to Dallas, its location would have meant subsonic speeds for much of the route as well as refueling stops being necessary.

One of the core assumptions underlying the Montréal Mirabel Airport scheme, was that SSTs would carry the majority of air passengers in the near future. As a result, it was built far away from the city where SST noise would not be an issue.

With its location relatively close to Europe and sonic booms over sparsely populated Canada not being much of an issue, Montréal was one of the few cities on the North-American continent that could be served non-stop and without restrictions.

With Montréal being the world's second largest French-speaking city after Paris, and with strong cultural and economic connections between France and Québec, scheduled Concorde service seemed feasible. However, the opening of Mirabel coincided with the start of Montréal's long-term economic decline and demand to sustain service simply never came. 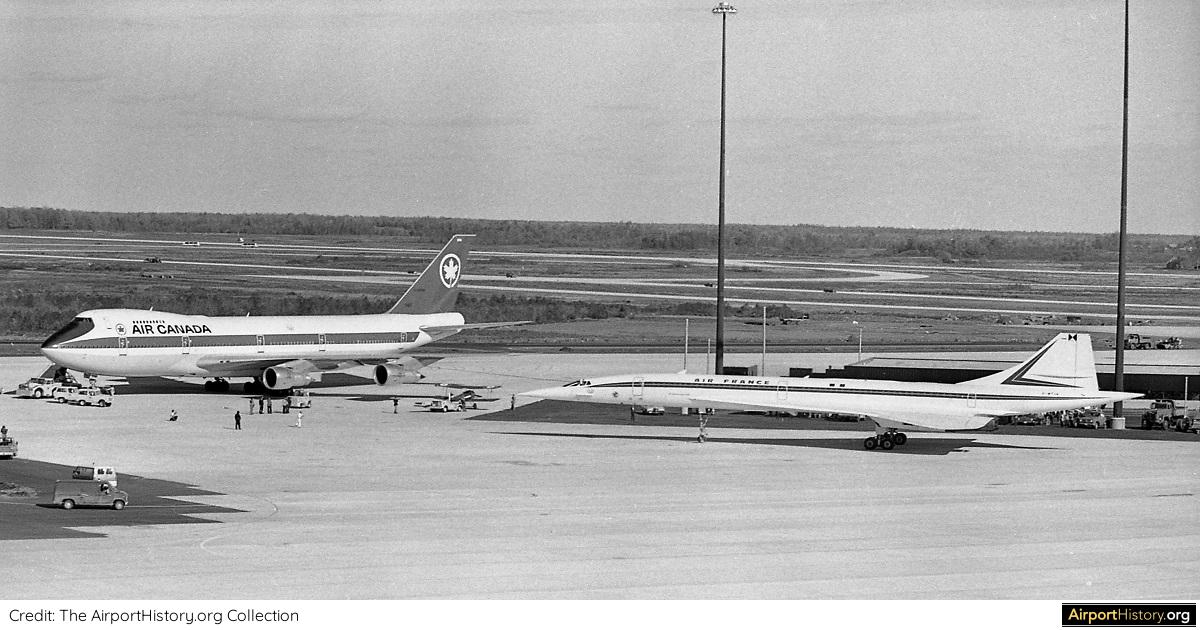 After the cancellation of the London Maplin scheme, British Airways Concordes would have to operate from an outdated and underwhelming Heathrow Airport (after the rebuilding of several terminals, it is now once again a decent airport).

​Terminal 3, then still quite new, provided an adequate but unglamorous experience for Concorde passengers. In 1986, Concorde moved to the then-state-of-the-art Terminal 4, which was a bit more of a suitable home for the beautiful bird!
PARIS

The vast Paris de Gaulle Airport (1974) was the only airport designed for SSTs that actually saw frequent Concorde service. It's spectacular "aérogares", if not always practical in use, certainly matched Concorde's elegant lines.

In the early years of Concorde service, de Gaulle's base carrier Air France operated routes to Caracas, Mexico City, New York Kennedy, Rio de Janeiro and Washington. By 1982 most routes had been cut due to lack of demand and only service to New York Kennedy remained.

Air France operated its last commercial Concorde flight from New York to Paris on May 31st, 2003. 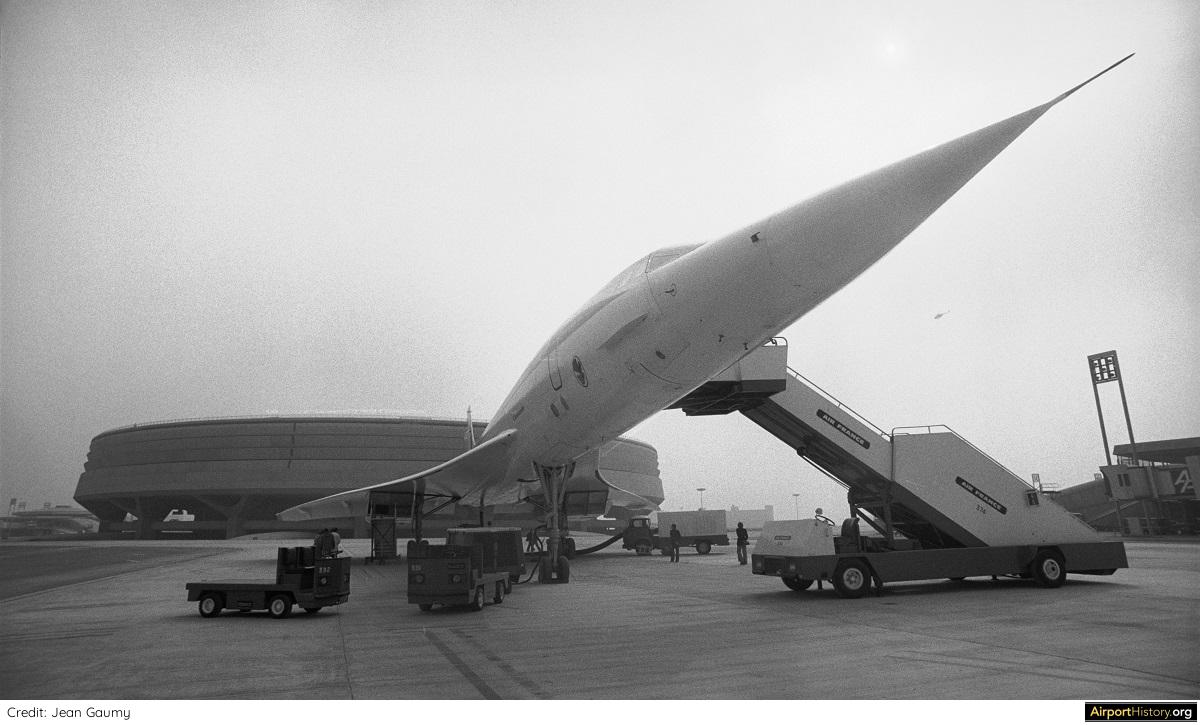 An Air France Concorde posing in front of "Aérogare 1" of the newly-opened Paris de Gaulle Airport in 1974. De Gaulle was designed for the Supersonic Age and what a beautiful couple these two make! 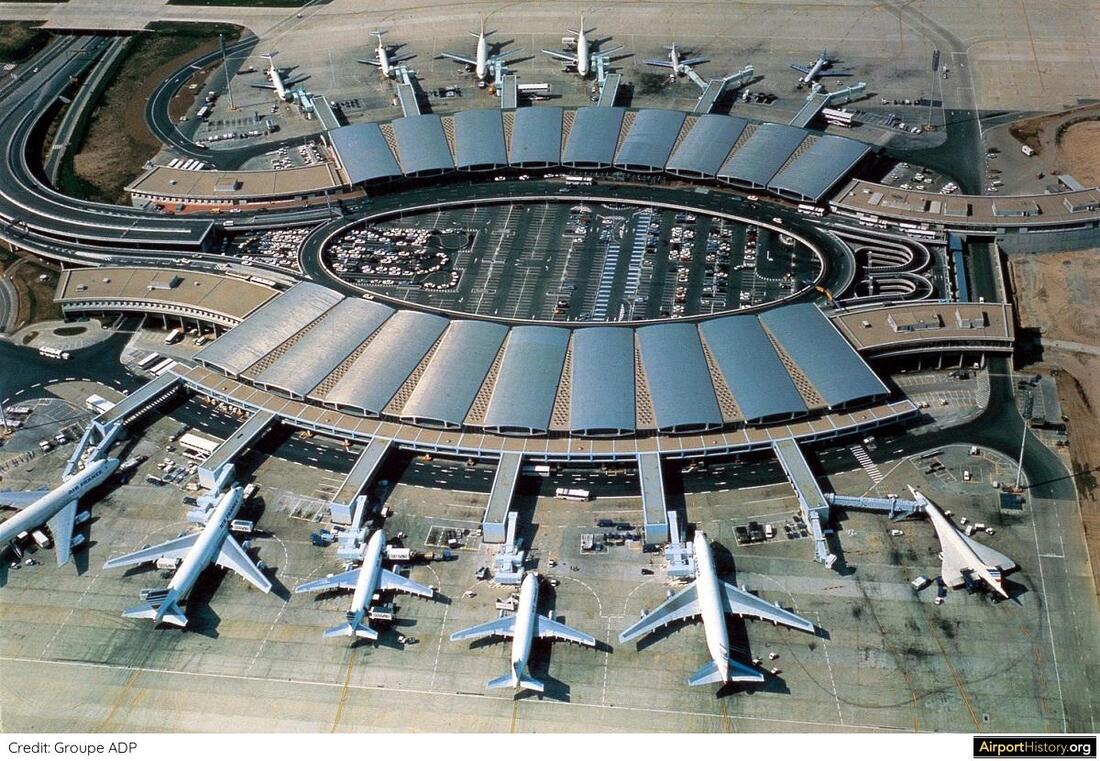 In January 1982, Air France moved its operations to the new Aérogare 2, Contrary to the circular Aérogare 1, Aérogare 2 had a more conventional linear design. It still looks spectacular from the air though! Later that year, in October 1982, Air France cut most of its Concorde routes.

On January 20th, 1977, Rio de Janeiro's Galeão Airport dedicated its new passenger terminal and runway after a three-year delay.  The expanded airport was nicknamed the "Supersonic Airport". However, by the time new facilities were put into use, it was clear that supersonic travel would remain a niche product for the lucky few.

​Rio de Janeiro was the destination of the very first commercial Concorde flight operated by Air France, on January 21st, 1976, a year before the new terminal opened. There were two weekly flights with the flight number AF085. In October 1982, Air France cut the service to due a lack of demand.
With the retirement of Concorde in 2003, the Supersonic Age came officially to an end. As of early 2020 though, several companies are working on a new generation of supersonic aircraft. If and when these will become a reality, we will be back with Part 3!
More airport articles