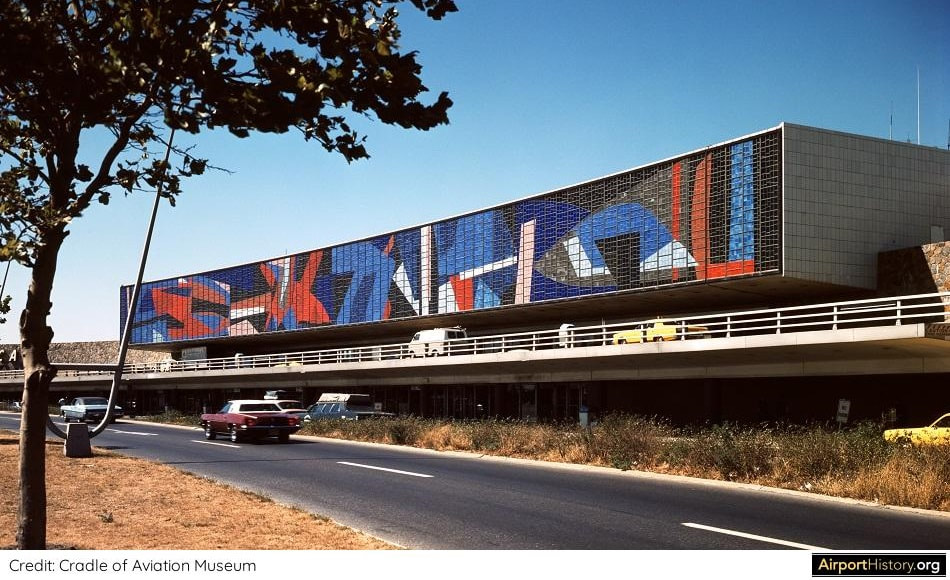 An exterior view of the American Airlines terminal showcasing its facade of multi-colored stained glass, which was projected 15 feet (5 meters) over the departure entrance.
By Marnix (Max) Groot
Airport Development
Expert and Historian
Published: 25 July 2019
Updated: January 2, 2021
In this installment of our history of New York John F. Kennedy Airport, we'll explore the terminal built for American Airlines. Opened in February 1960 and officially dedicated in May of the same year, the American Airlines terminal was the third airline terminal to open after those of United Airlines and Eastern Air Lines.

Having put in an initial order for 30 Boeing 707-123s for its transcontinental routes, American Airlines wanted a terminal that would match the prestige of its new jets. The carrier leased a 11.7-hectare (29-acre) site next to United. It commissioned New York firm Kahn & Jacobs to design its terminal.

American's main requirements were for landside separation of departing and arriving passengers, nose-in parking for its aircraft (see section Nose-in Parking) and room for future expansion.

​​The American Airlines terminal was described by some as a blend of art and architecture.

A BLEND OF ART AND ARCHITECTURE

The architects produced a design featuring a three-level central section with two-level concourses and wings on either side, offering a total of 186,500 square feet (17,326 square meters) of floor space. The central section of the terminal included a huge panoramic window overlooking the ramp. ​The landside featured a 317-by-23-foot (97-by-7-meter) stained glass facade, which was the world's largest stained glass installation in the world for almost 20 years.​

​The facade was slightly concave to the street. Together with the setting of the wings at an angle, this presented a gently curved facade for the extent of its 700-foot (213-meter) landside frontage. The terminal interior also featured several impressive murals. Thus, the American Airlines terminal was described by some as a blend of art and architecture. 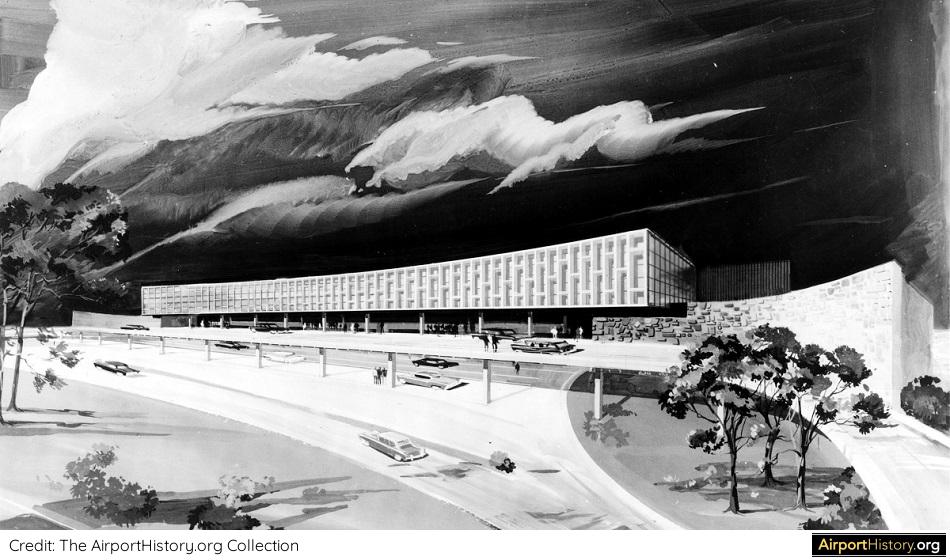 Initial plans for the south-facing landside facade proposed a window wall behind an ornamental cast stone sun screen, but this idea was discarded in favor of an enormous stained glass window.
​NOSE-IN PARKING

The two concourses provided six gates each: four gates for jets served by boarding bridges, and two for propeller aircraft, which would board by stairs. The concourses could be extended to provide four more gates each, raising the total number of gates to 20.

Contrary to most other major airlines at the time, American chose to park its aircraft nose-in, saving valuable space compared with parking parallel to the concourse. In order to enable passenger boarding from the rear, the terminal design featured fixed bridges, which would be fitted with telescoping boarding bridges (see below).

​However, during construction, American decided that double bridges did not justify the investment as it only saved a a few minutes in boarding time.
For a while the fixed corridors would be used to board passengers of propeller aircraft but later dismantled. 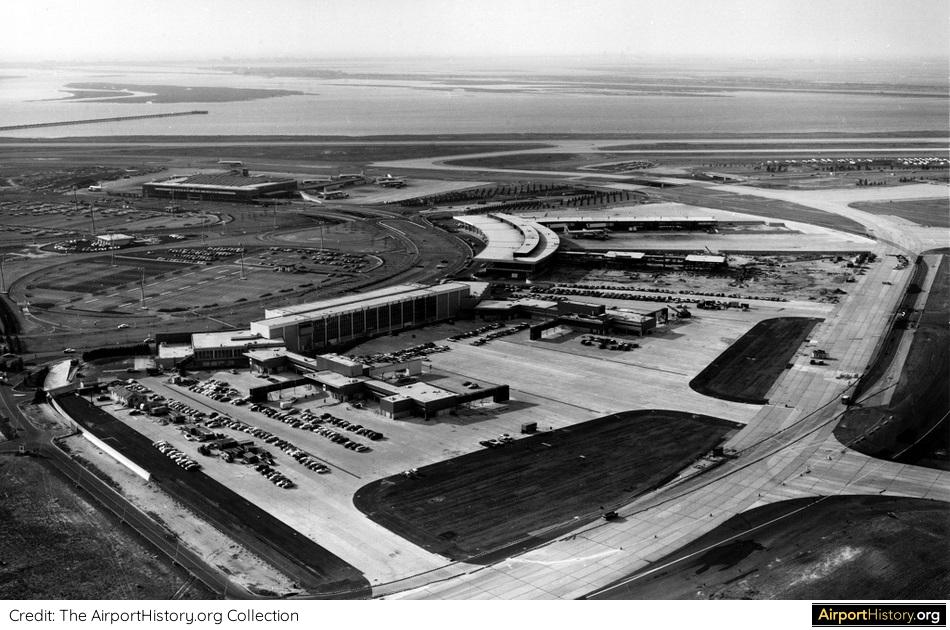 The American Airlines terminal is nearing completion in early 1960 (middle right). One of American's design requirements was that there would be room for expansion. From this view it's appearant that there is plenty of space to lengthen the concourses. Note that United's terminal next door is already in use, with Delta's smaller concourse still under construction. Also visible is Eastern's terminal, which had been inaugurated in October the previous year.

​LAYOUT AND FACILITIES
​
The ground floor of the terminal accommodated the baggage reclaim and arrivals hall; baggage room; a barber shop; operations space; a staff cafeteria; and a flight kitchen for American's catering subsidiary Sky Chefs.

​The second level was dominated by the 300-foot (91-meter), double-height lobby with its panoramic window overlooking the ramp. The check-in desks were arranged in front of the window (see gallery below).
GALLERY: AMERICAN AIRLINES TERMINAL - AERIAL VIEWS 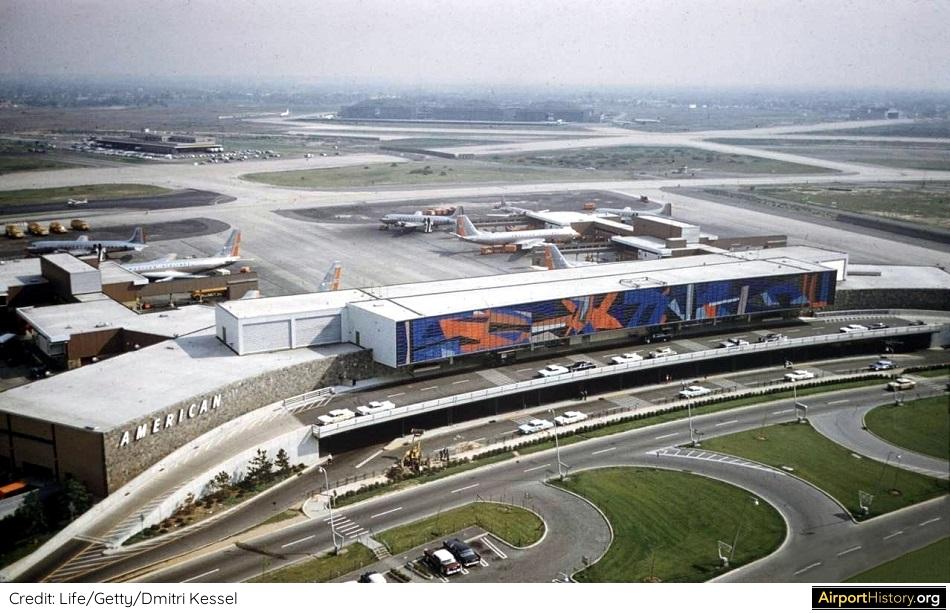 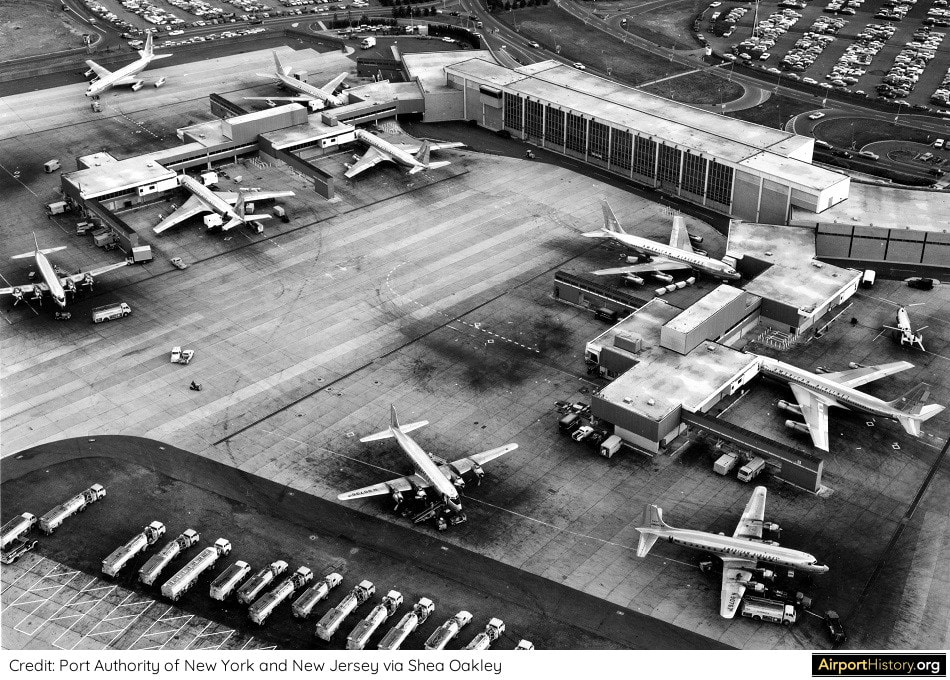 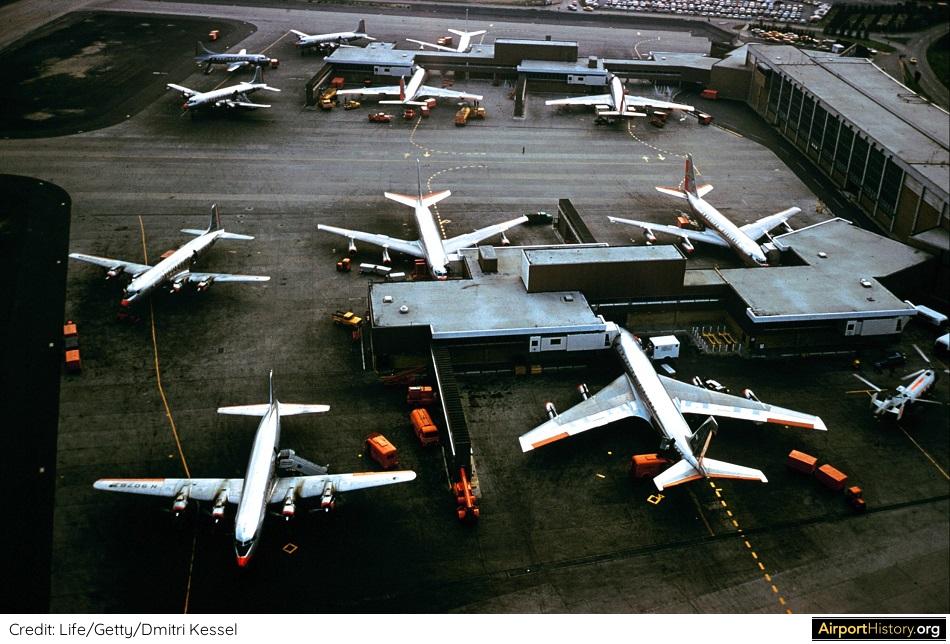 Sign up to our e-mail newsletter to know when new content goes online!
​The east wing featured the main coffee shop, cocktail bar and restaurant, which would later be named "The Astro Room". This name was inspired by American's Boeing 707s, which it named "Astrojets" starting in 1961.

​The west wing featured a smaller snack bar and cocktail bar along with offices for communications, dispatch and meteorology. The second level also contained a souvenir shop, news stand and a flight insurance booth, all of which were a common sight at airports at the time.

​​The third mezzanine level provided two rows of public seats facing the picture window, offices, meeting rooms and the Admirals Club for first-class passengers. The interior of the Admirals Club had a separate lounge, bar and television as well as card-playing areas.
GALLERY: AMERICAN AIRLINES TERMINAL - EXTERIOR AND INTERIOR VIEWS 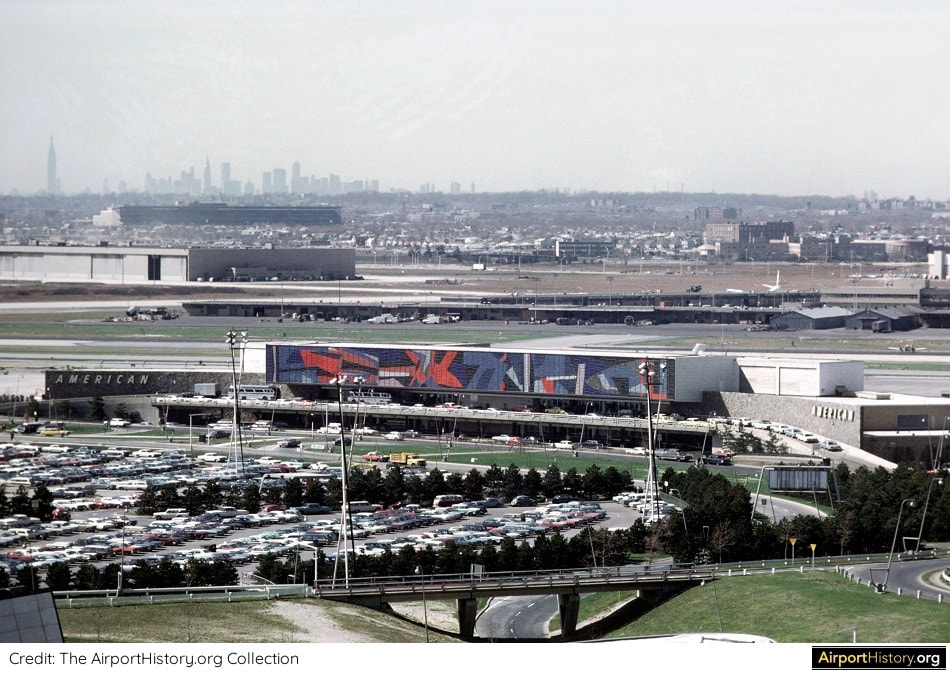 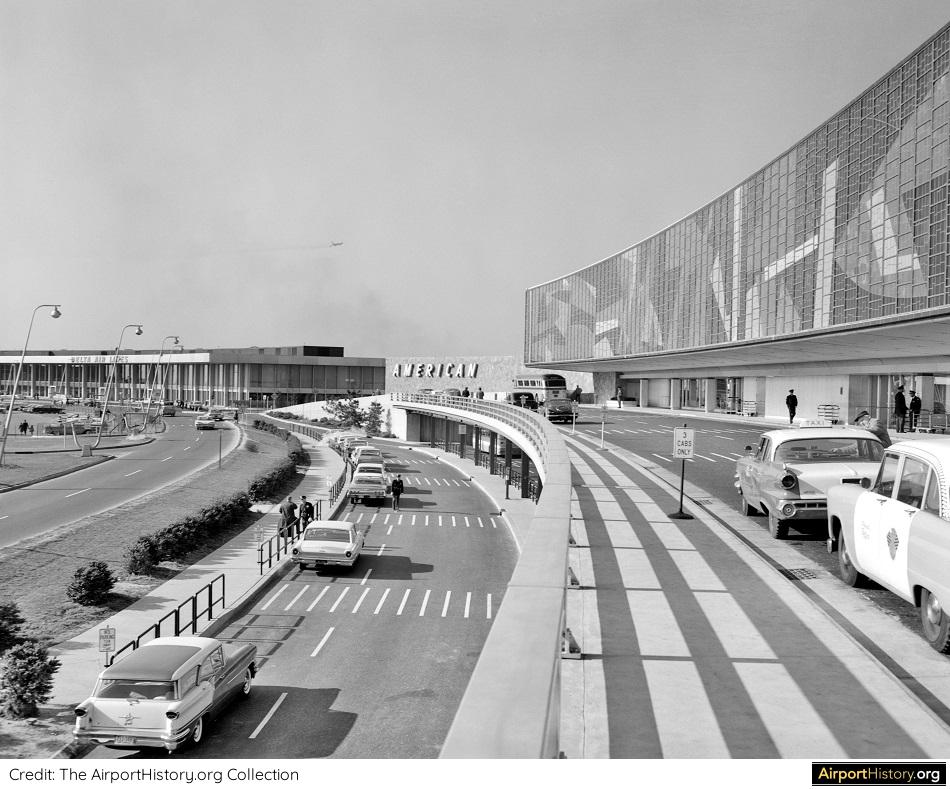 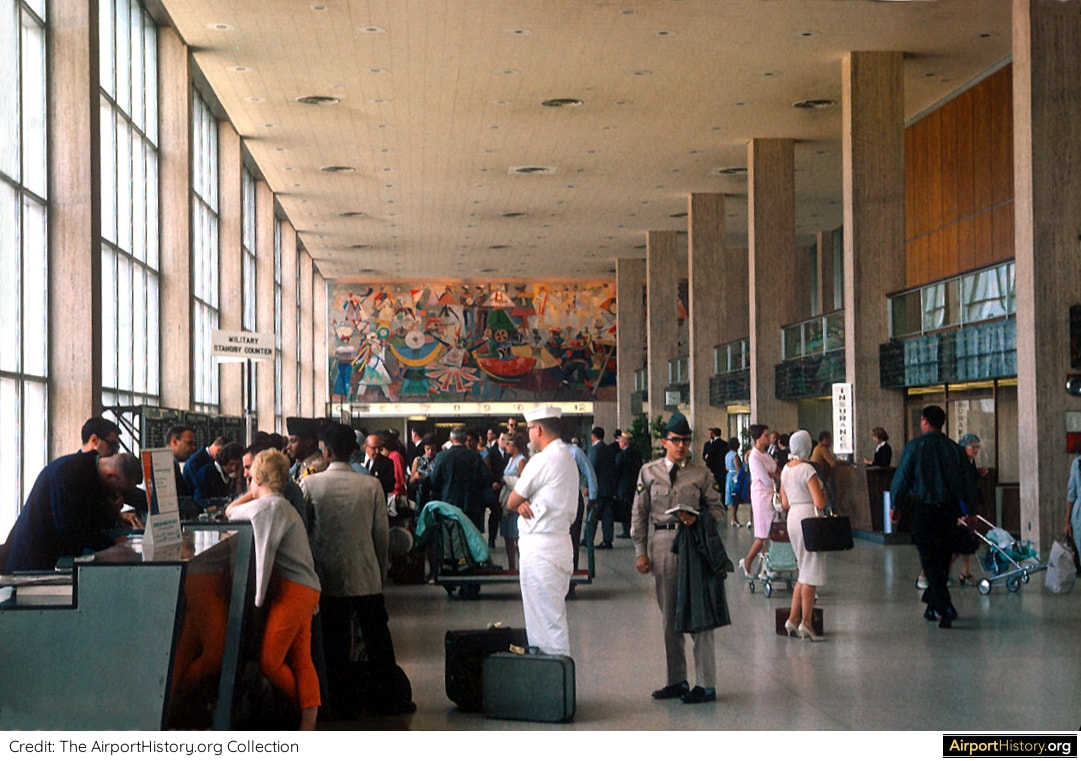 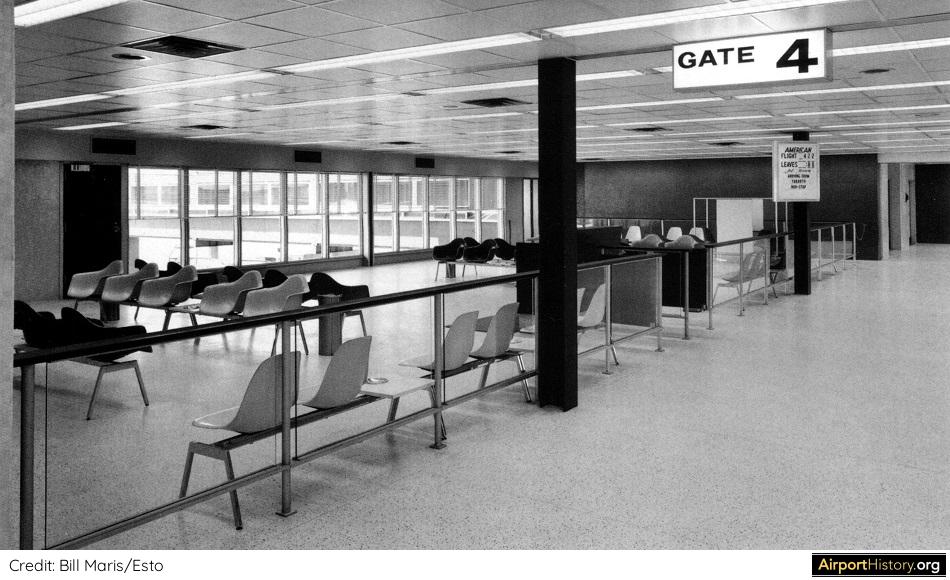 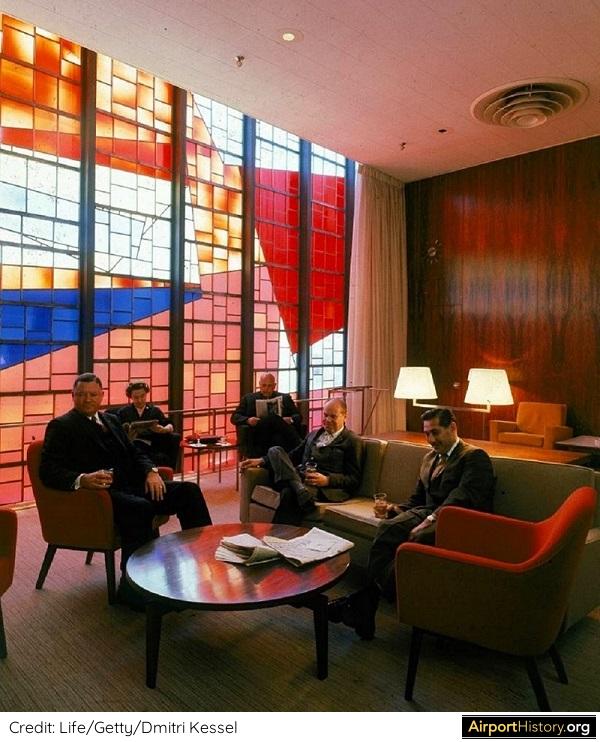 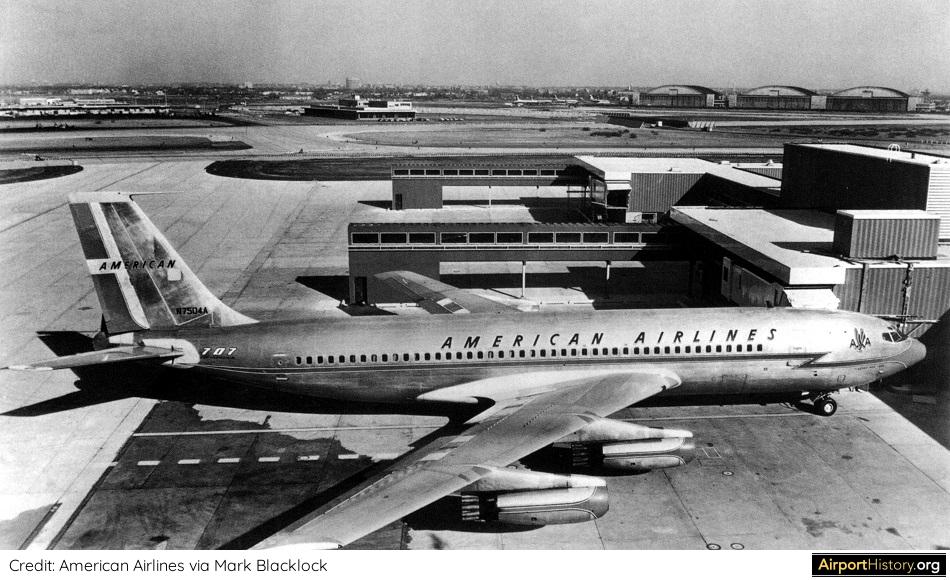 ​We here in New York have the greatest and finest airport in the world.
- New York Mayor Wagner at the dedication ceremony

We will revisit American's terminal later on to follow-up on developments after its opening. In the next installment we will explore the designs of the legendary Pan Am terminal.