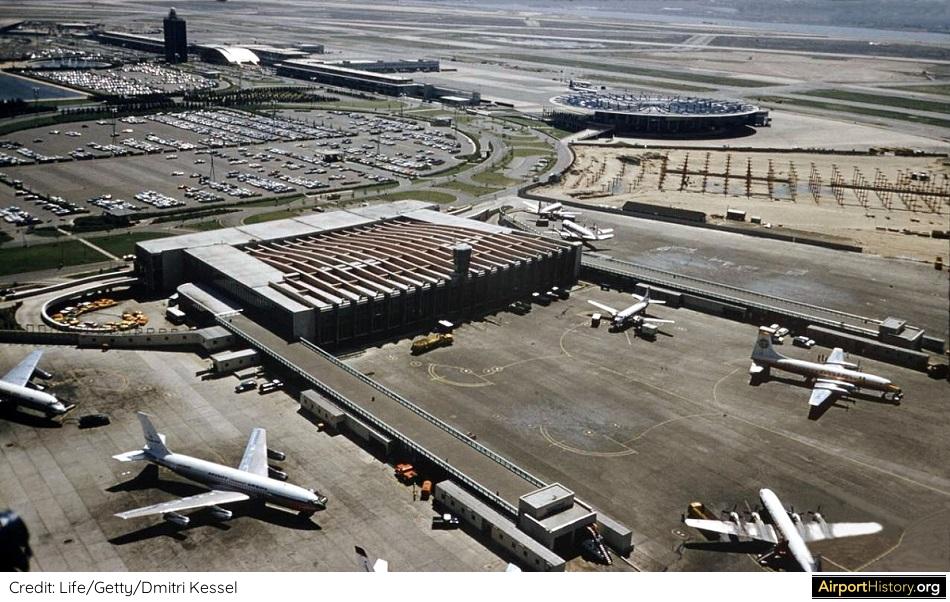 A 1961 aerial view of the Eastern Air Lines terminal. The two concourses were located at ground level and featured observation decks over their entire length. Next door, construction on the combined terminal for Northeast/Braniff/Northwest is in full swing. Also visible at the top are the Pan Am terminal and the IAB.
By Marnix (Max) Groot
Airport Development
Expert and Historian
Published: 25 July 2019
Updated: January 2, 2020
In this installment of our history of New York John F. Kennedy Airport, we'll explore the second airline terminal that opened at Idlewild, that of Eastern Air Lines. Opened in October 29, 1959, the Eastern Air Lines terminal was the second airline terminal to open after that of United Airlines.

An artist's impression of Eastern's future terminal. The design featured a glass curtain wall on the landside.
BIG AMBITIONS
​
​In the mid-1950's, Eastern Air Lines was the largest US airline in terms of passenger numbers. In 1955, the carrier ordered 140 new aircraft worth USD 400 million.

Eastern Air Lines commissioned architect Chester Lindsey Churchill to design the terminal. Churchill designed a building that had a rectangular landside block, a fan-shaped main section and two gate concourses (see below). The terminal was characterized by the use of glass curtain walls, a ribbed roof and the use of lots of marble and granite, which evoked the feel of a railway station, but for aircraft.

Arrivals and departures were placed on separate levels, each served by a three-lane roadway. Above the roadways was a third level of offices. With 361,280 square feet (33,564 square meters), the Eastern Air Lines Terminal would be the largest passenger terminal for use by a single airline anywhere.

The plans were unveiled in March 1957, but three months later, the Port Authority announced a major redevelopment of LaGuardia. Consequently, Eastern decided to keep operating out of both airports. Despite construction not yet having started, the carrier decided to not scale back the size of the terminal at Idlewild.

Unlike other airline terminals, the concourses had a simple one-level design and no boarding bridges were provided.

Beyond the lobby there was an arcade of shops. Beyond the arcade was the north and south waiting rooms, a 130-seat snack bar as well as restaurant and adjoining cocktail lounge seating 200 called the Falcon Room, which overlooked the ramp.

​​​The third floor contained flight crew quarters, communications, operations offices, a VIP room, press room, employee lounges and a lunch room. ​Atop the building overlooking the apron was a glass-enclosed coordinator's tower, from which all movements of aircraft and ground equipment were coordinated. ​

​As the level of the ramp was between the arrivals and departures levels of the main building, passenger flows to and from the concourses were always downward. An interesting design feature was that the terminal lacked any stairs. Instead passengers would use ramps. ​ 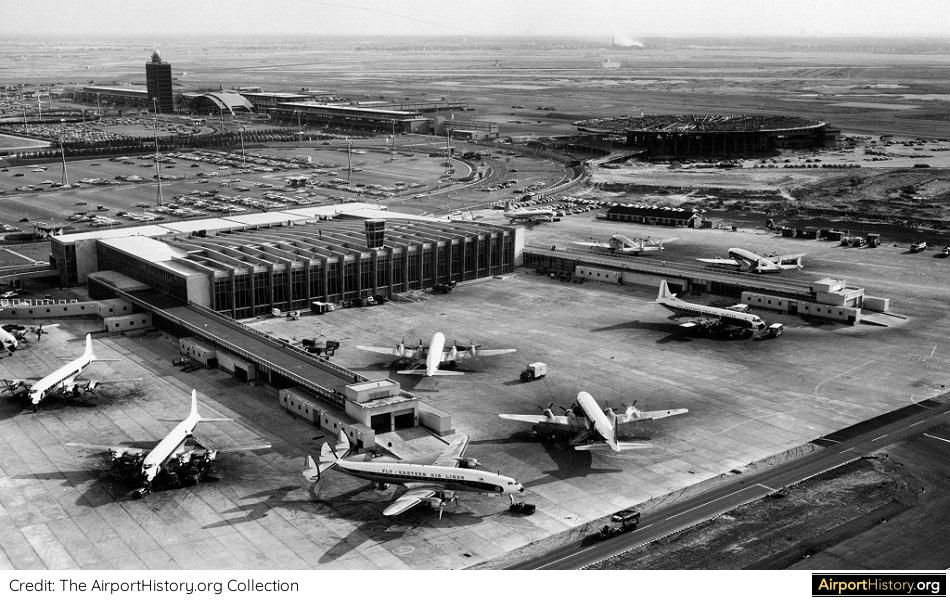 An aerial view taken soon after opening in late October 1959, just before the first jets started to appear on the scene.

Sign up to our e-mail newsletter to know when new content goes online!
​ABSENCE OF BOARDING BRIDGES
​
Passengers boarded aircraft via the two 350-foot (110-meter) concourses called "loading arcades", which provided a total of 16 aircraft stands.

At the time of design, Eastern mostly operated propeller aircraft on short-to medium-haul routes. Thus, unlike the other airline terminals, the concourses had a simple one-level design and no boarding bridges were provided.

From the 1955 order for 140 aircraft, only 20 were for DC-8 aircraft (of which only 16 entered service). Hence boarding bridges were deemed unnecessary.
A UNIQUE AND ILL-CONCEIVED FEATURE
​
A big and strange feature of the Eastern terminal was that all of the baggage systems and baggage roadways were located underneath the terminal. Baggage carts and tugs—all diesel-powered—entered and exited the underground system via portals at the ends of the two arcades.

Passengers in the arcades would hear and feel the diesel tugs and cart trains rattling away, underneath them! This would later prove cramped, impossible to expand, questionably healthy (poor air quality), and vulnerable to shutdowns when roads were blocked or when there was an incident or emergency.
​GALLERY: EASTERN AIR LINES TERMINAL - AERIAL, EXTERIOR AND INTERIOR VIEWS 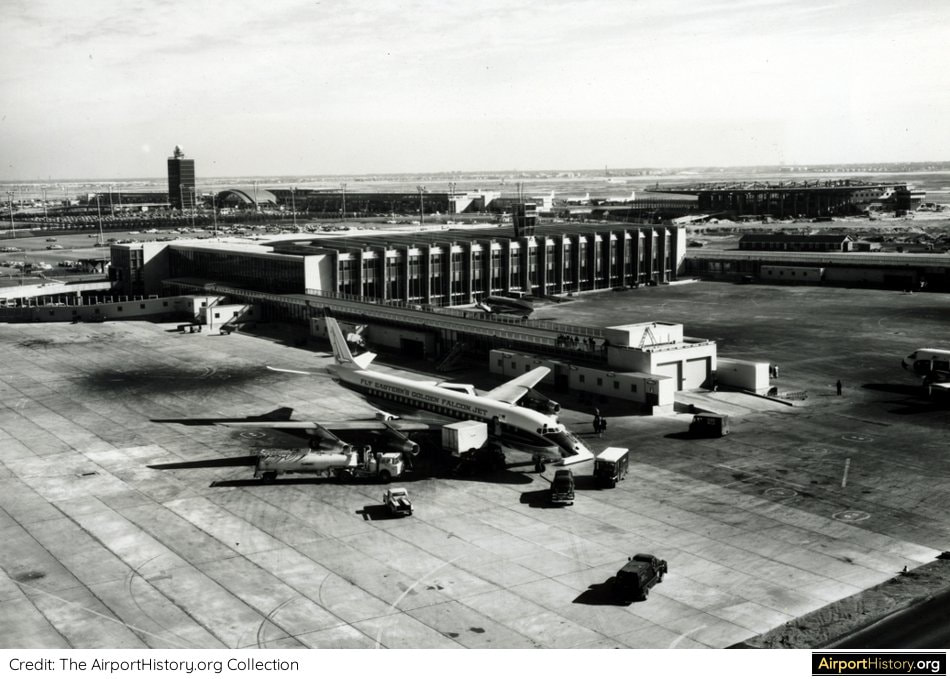 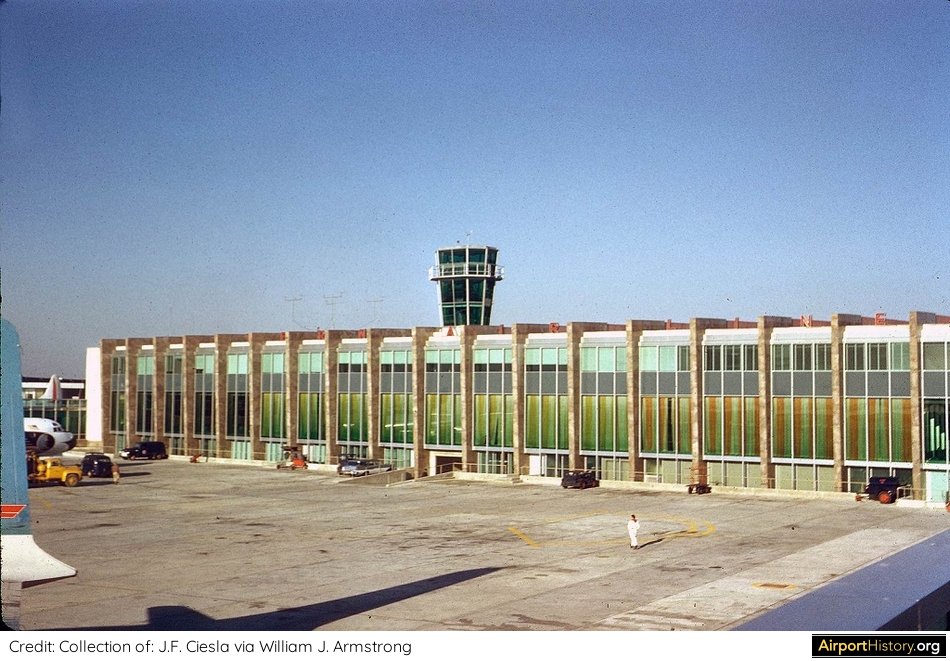 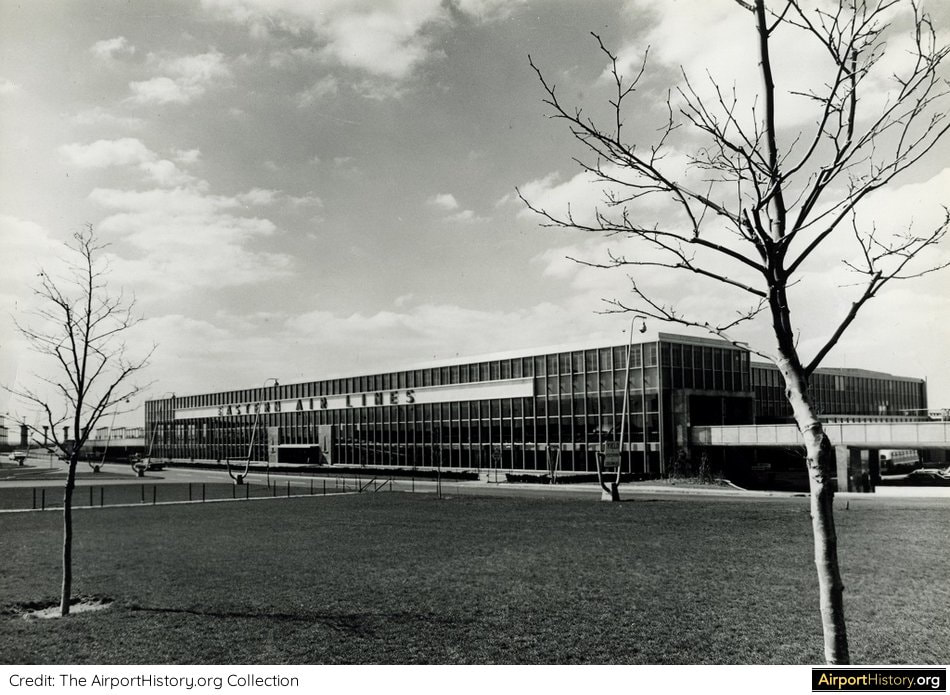 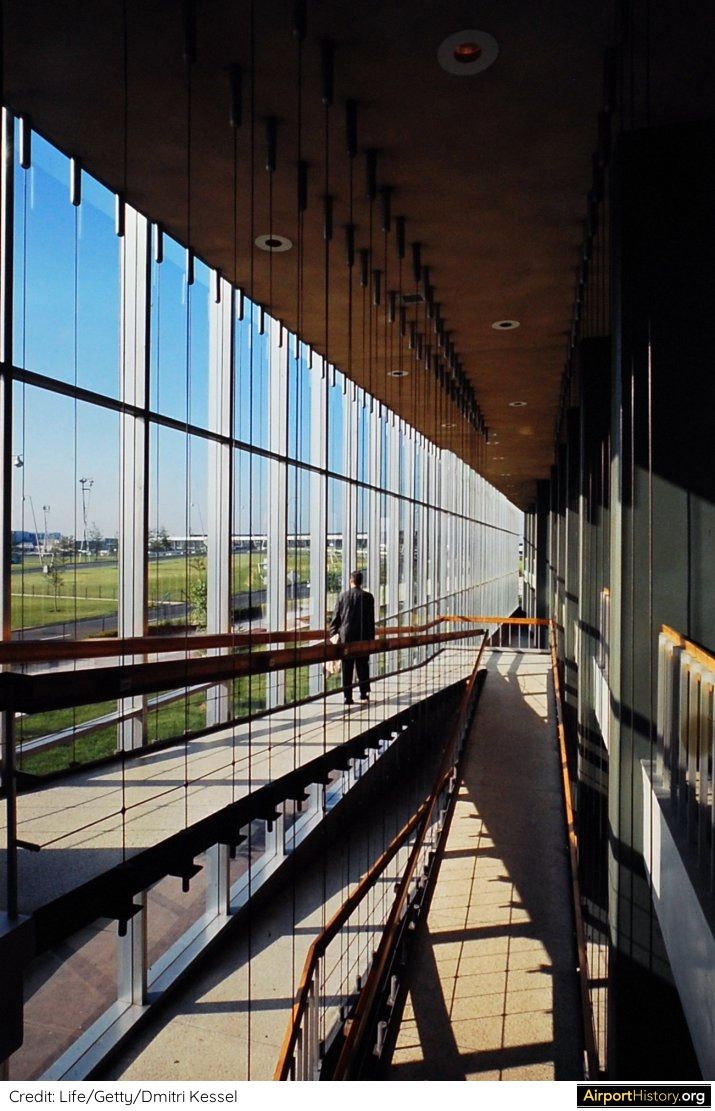 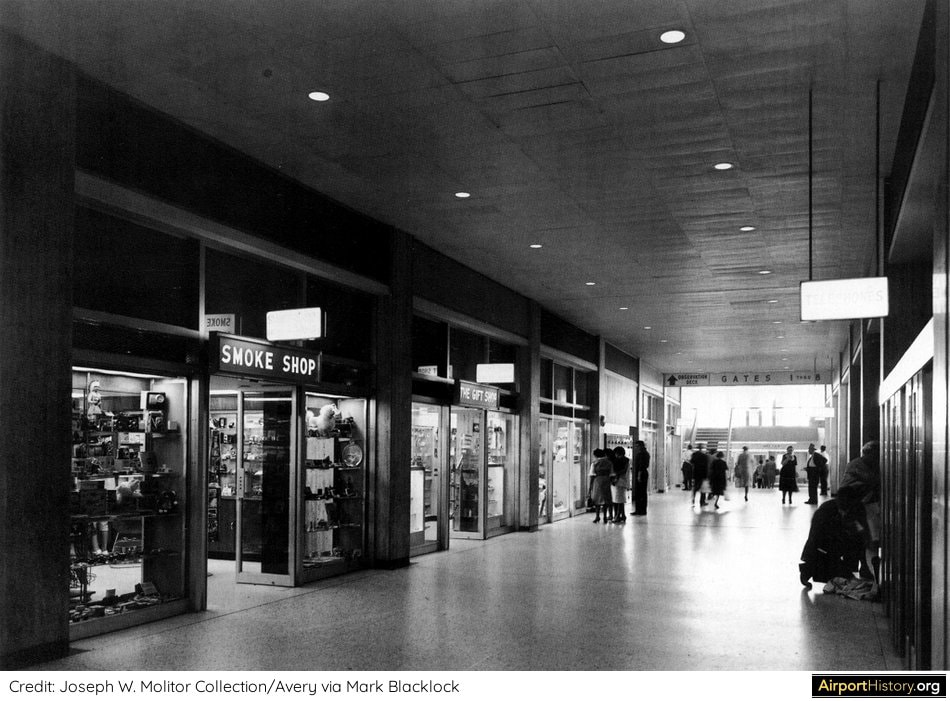 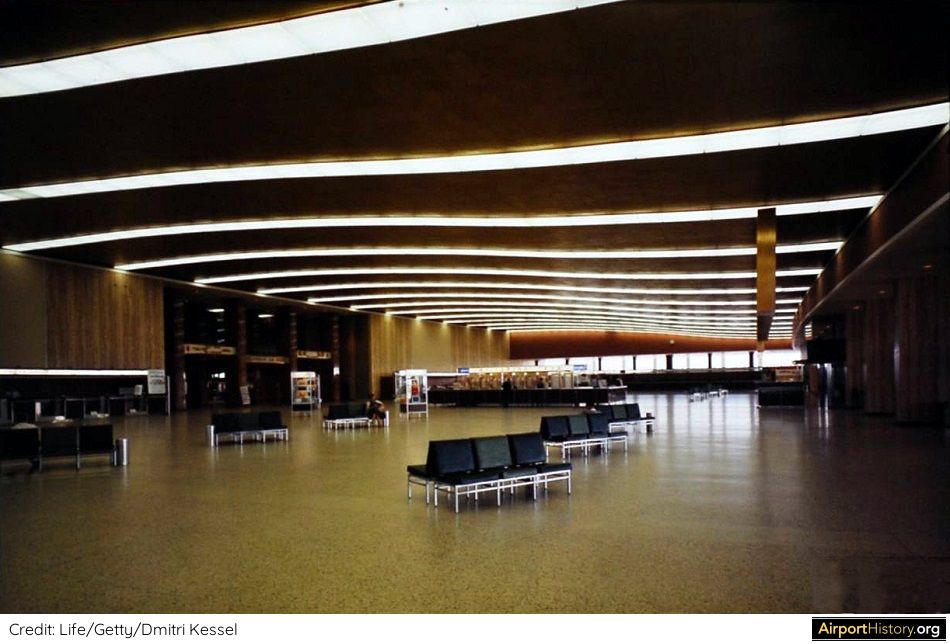 On October 29, 1959, at 4:45 AM, Eastern Air Lines welcomed its first customer to its flagship USD 20 million passenger terminal. It was the second of Idlewild's airline terminals to open, being narrowly beaten by United.

​The first passenger was Donald Kirk, a construction engineer going home to Montreal and making connecting flights from Miami. He left at 8 AM on one of two first outbound flights that departed together.

The first inbound flight arrived a bit earlier at 7:29 AM, the first of 104 flights inbound and outbound flights that day. At the time, major destinations out of Idlewild included Miami, Atlanta, Houston, Washington, San Juan and Mexico City.

​Eastern reported that 222,680 went through the turnstiles to the observation decks and more than 40,000 others had made prior arrangements for special guided tours.

​After opening, the terminal remained underutilized for several years. The situation was partly remedied by taking in the regional carrier Mohawk as a subtenant.

After Eastern discovered that competitors using jet aircraft had a big marketing advantage, it hastily ordered 15 Boeing 720s, which now could only be boarded by stairs. Later that decade, a plan was prepared to replace the concourses with a T-shaped concourse equipped with boarding bridges but this plan never materialized.

​Bridges started being installed on the existing concourses from late 1967, in order to accommodate the new Super DC-8 service. Due to the concourses being located at ramp level, the boarding bridges angled upward, which was not popular with passengers.
We will revisit Eastern's terminal later on to follow up on developments after its opening. Click below to read the next part, where we will explore the design of American Airlines' terminal.

I want to give a special thanks to David Kaufman and Shea Oakley, commercial aviation historian, who provided great insights and feedback on this article.