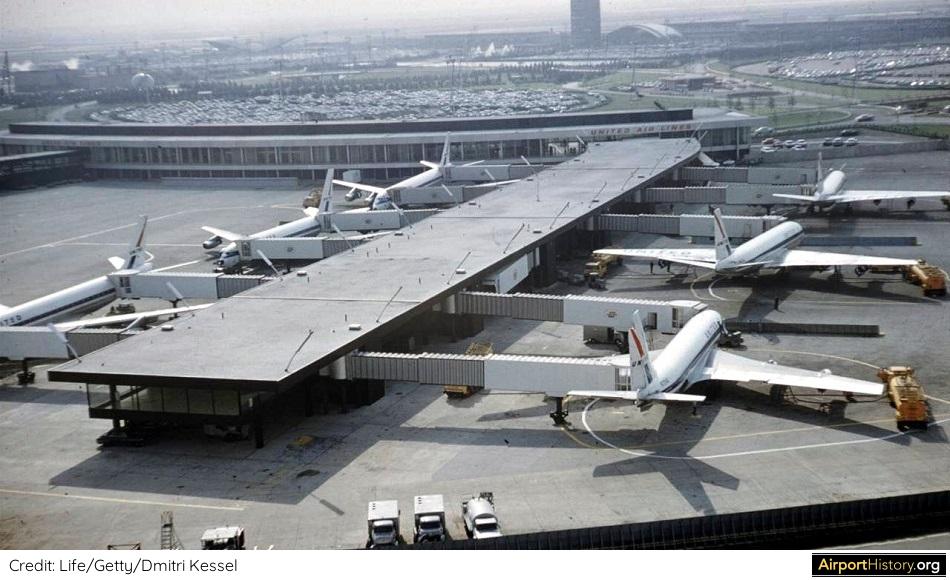 A 1961 aerial view of the United Airlines terminal. The gates are occupied with United DC-8s and Boeing 720s. In the early days of the Jet Age most airlines parallel parked to the terminal, allowing boarding bridges to be connected both at the front and the rear of the aircraft, and enabling aircraft to taxi in and out on their own power. Credit: Life/Getty/Dmitri Kessel.
By Marnix (Max) Groot
Airport Development
Expert and Historian
Published: 25 July 2019
Updated: January 2, 2020

With the International Arrival Building (IAB) completed in December of 1957, the focus shifted to the construction of the individual airline terminals. In this installment of our history of New York John F. Kennedy Airport, we'll explore the the first airline terminal that opened at Idlewild, that of United Airlines.

DESIGNED FOR THE JET AGE
​
​United and Eastern were the first airlines to secure site leases with the Port Authority. United had an 11-hectare (27-acre) site in the northwest area of Terminal City and commissioned Skidmore, Owings and Merrill (SOM), who also planned the IAB, to design the terminal. ​

SOM came up with an elegant, two-level, crescent-shaped building providing 250,000 sq. ft. (23,226 sq. m.) of floor space. The facade, which spanned 691 feet (211 meters), was constructed entirely of glass panels and aluminum frames (see gallery below).​​ Arrivals and departures were both at-grade so there were no ramps to break up the long, low facade. A double-height check-in hall in the center of the building was flanked by baggage claim areas.

The ground floor also accommodated a snack bar, a flight kitchen for United and other operational space. Escalators at each end of the check-in hall led to lounges, offices and concession space on the second level and two gate concourses.​
​DESIGNED FOR FAST LOADING

The terminal was designed to speed passengers from lobby to aircraft in as little as two minutes and incorporated many improvements in baggage handling and ticketing. An example of these innovations was United's "express check-in" system, which had check-in counters set up like supermarket cash counters.

The United terminal was years ahead of its time in that it contained many concessions supplying all the traveler's needs including a bookstore, cosmetic shop, drugstore, camera supply shop, gift shop, haberdashery (selling small articles for sewing) and a rent-a-car counter. Apart from the shops, the concessions also included a 200-seat restaurant, a coffee shop and cocktail lounge.

​The United terminal was designed to speed passengers from lobby to planes in as little as two minutes.

Another notable innovation was the use of boarding bridges. United was one of the driving forces behind this amazing boarding innovation and put in a large order for its new terminals and concourses at Idlewild, O'Hare, Los Angeles and San Francisco (more about that in our feature on the boarding bridge here).

​United's terminal was designed with boarding bridges in mind and was the first terminal at Idlewild to incorporate them. The terminal boasted a large concourse with seven gates equipped with 13 boarding bridges. 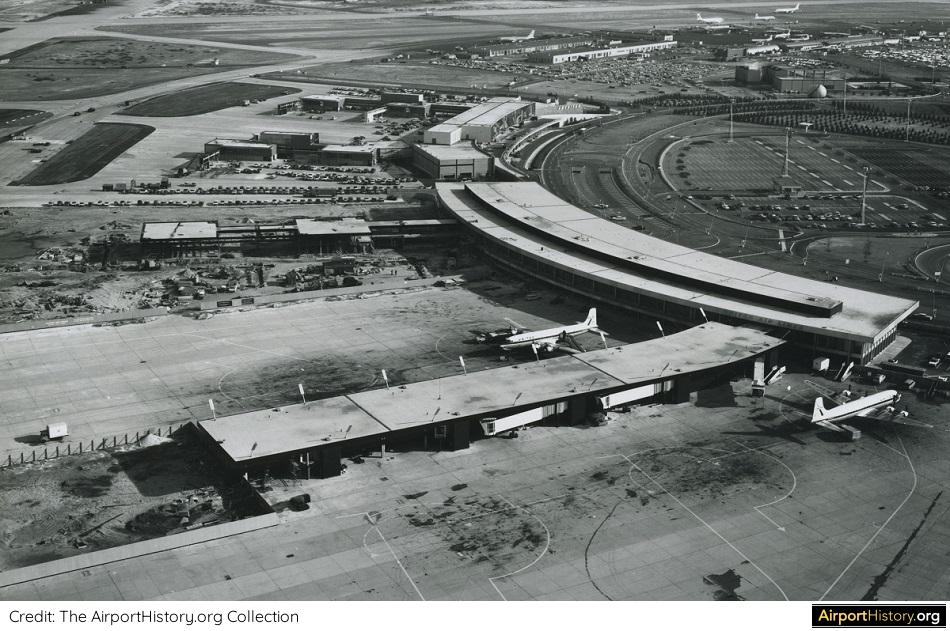 An aerial view of United's terminal looking northeast, taken shortly after opening in October 1959. Note that Delta's concourse is still under construction. American's terminal is nearing completion in the background. The structure behind the American Airlines terminal is a cargo building. To the right of that is the temporary teminal.

Sign up to our e-mail newsletter to know when new content goes online!
There were six gates with double bridges, enabling six of United's DC-8 and Boeing 720 aircraft to be serviced simultaneously, with bridges connected to the front and rear.

​There was also one gate served by a single boarding bridge, which was meant to serve Delta's DC-6 and DC-7 propeller aircraft. The bridges were designed to be deployed and connected to the aircraft in under a minute.

​A smaller second concourse provided four nose-in gates, each with a single boarding bridge. This concourse, together with space at the terminal's eastern end, was sub-leased to Delta Air Lines.
GALLERY: UNITED TERMINAL - EXTERIOR VIEWS 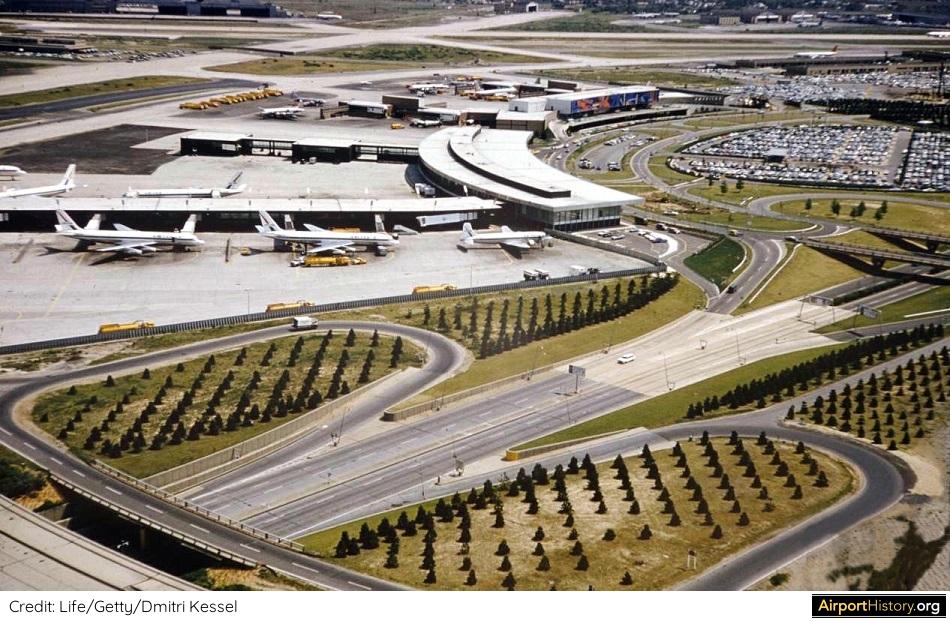 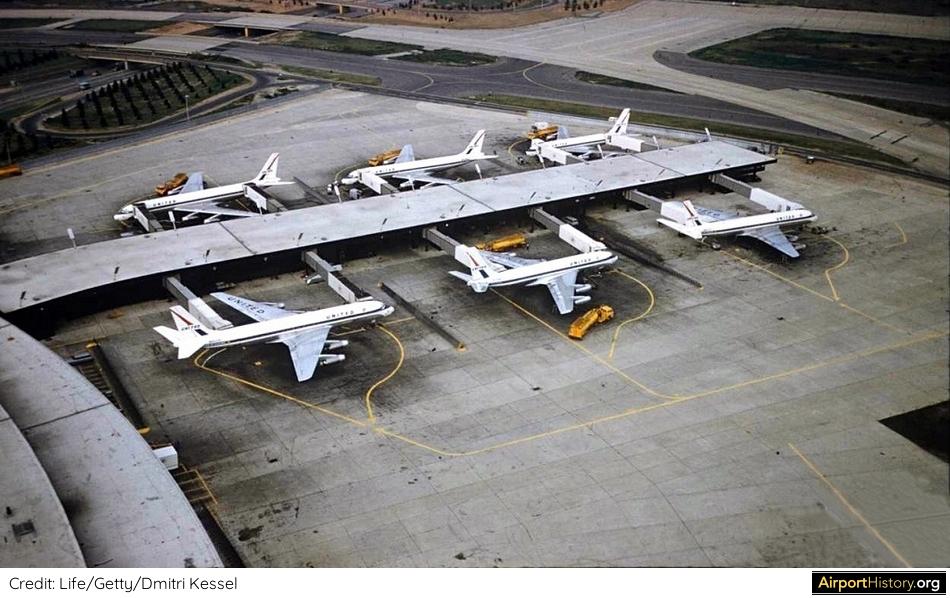 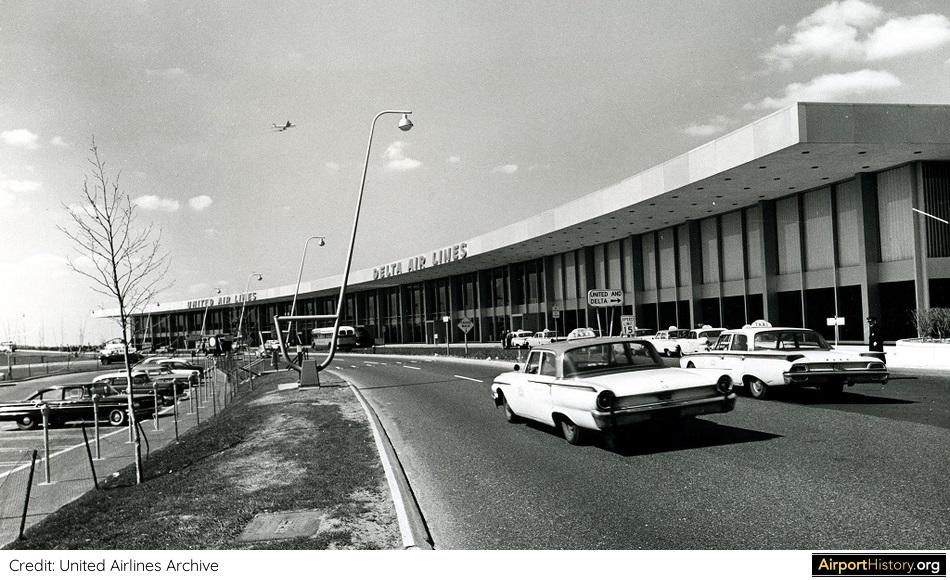 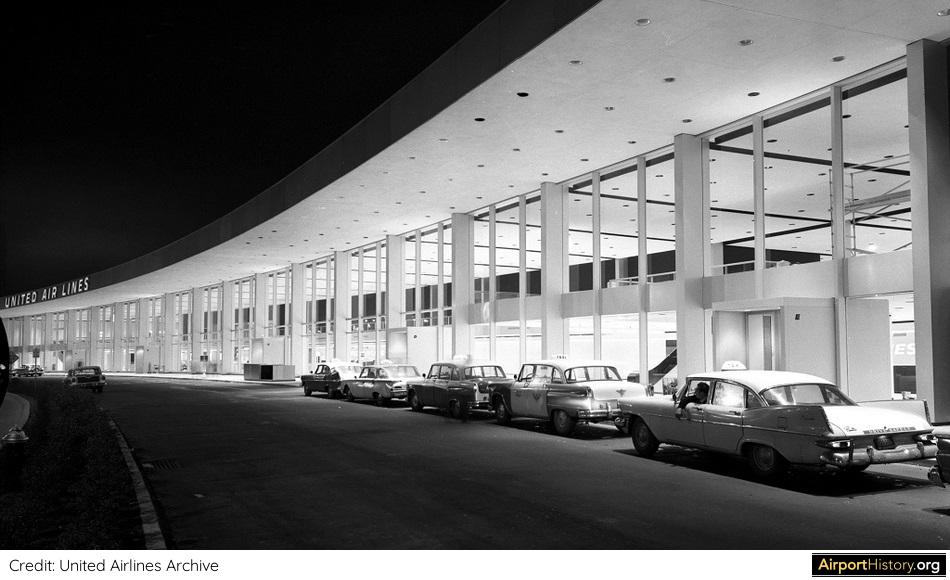 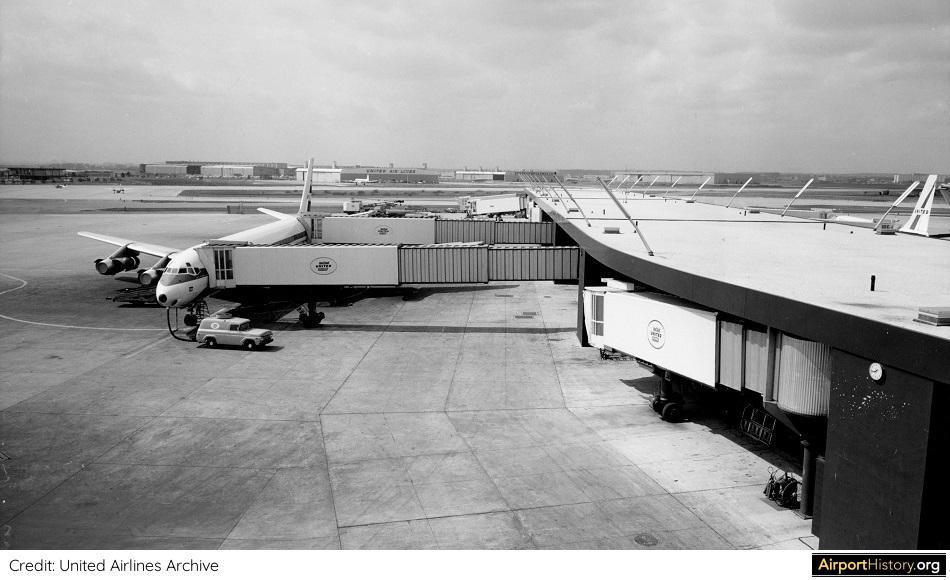 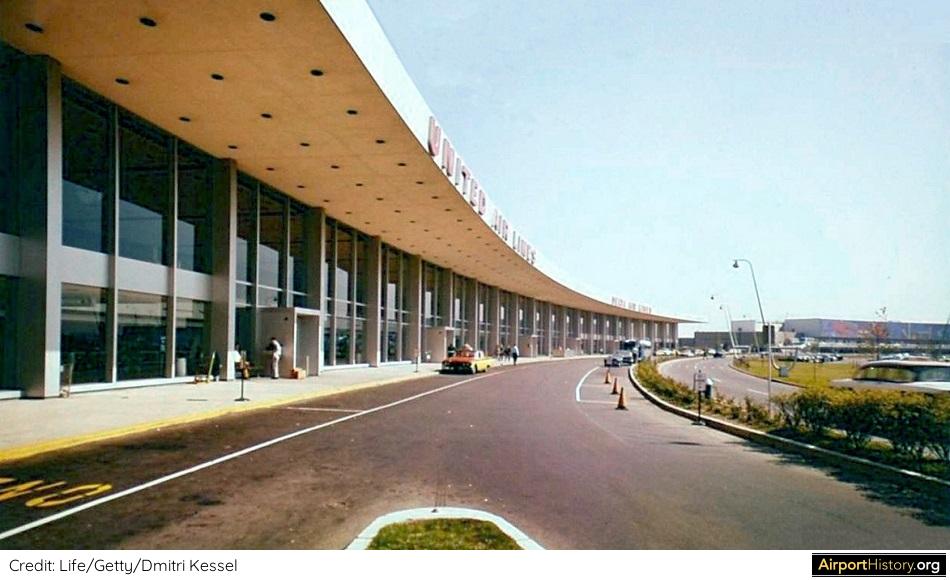 ​​​THE DEPARTURE PROCESS
​
​Pre-ticketed passengers would enter at the first level, then proceed through United's "express check-in" system. The system had positions somewhat like a supermarket where baggage was weighed, tagged and placed on a conveyor. Passengers with excess baggage continued beyond the first bank of check-in stations and paid at an 'excess counter'.

​Passengers then continued on via escalators, located at each end of the check-in hall, to the second level, then along the concourse to a 'hold room' at the gate, where tickets were checked.  An agent at the door directed people to the right or left side of the room, depending on whether they were first-class or economy passengers. When the flight was called they boarded through one of two boarding bridges, first class using the front, economy class by the rear. ​​

Late or not, the United terminal has the distinction of being the first terminal to open that was designed for the Jet Age. ​ 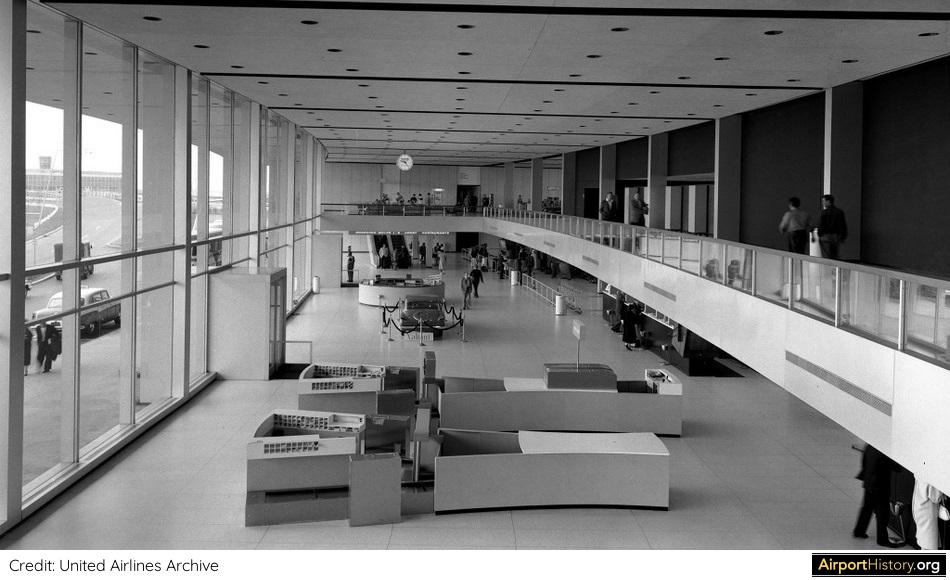 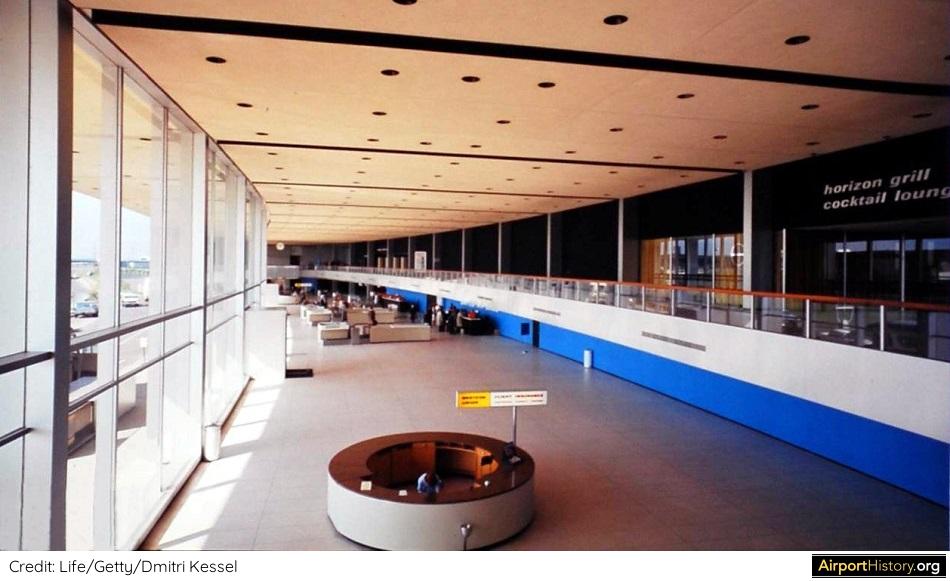 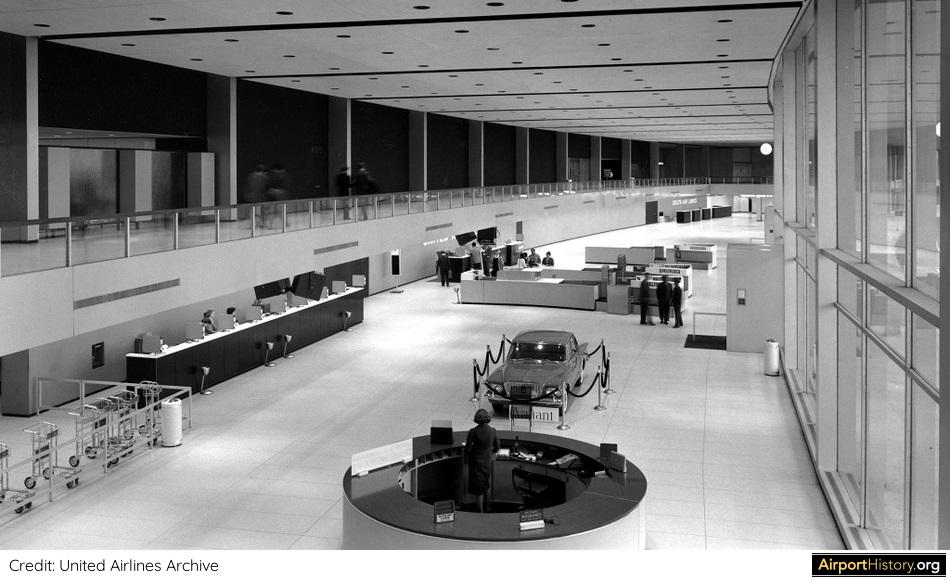 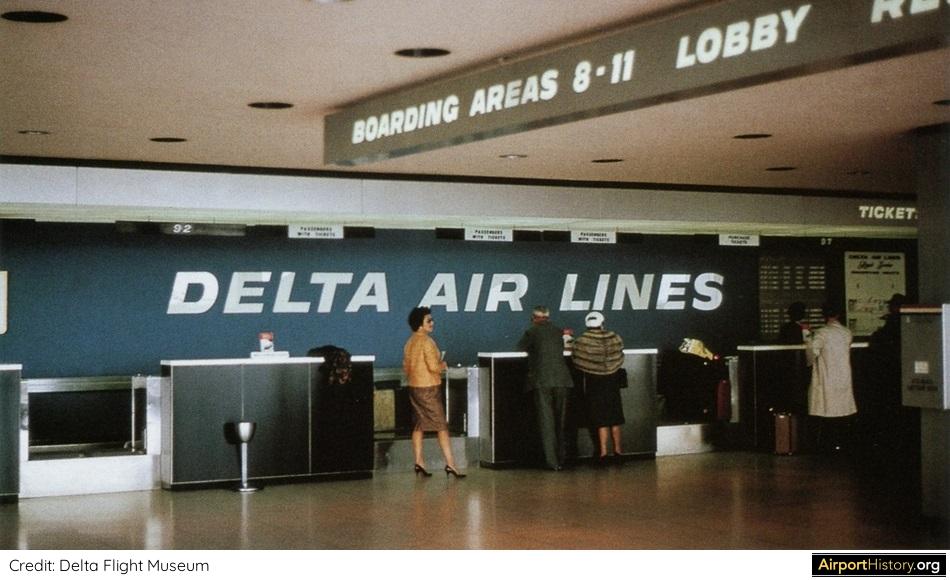 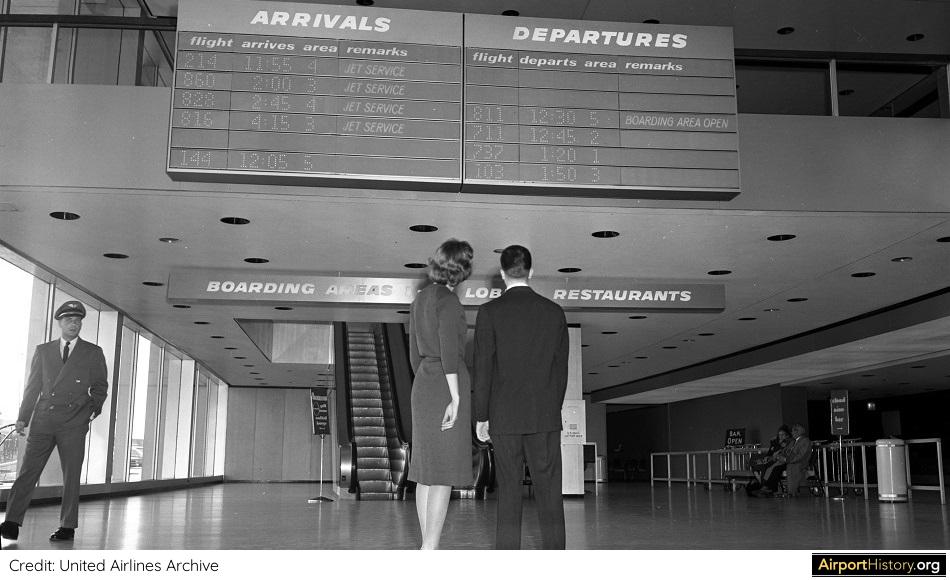 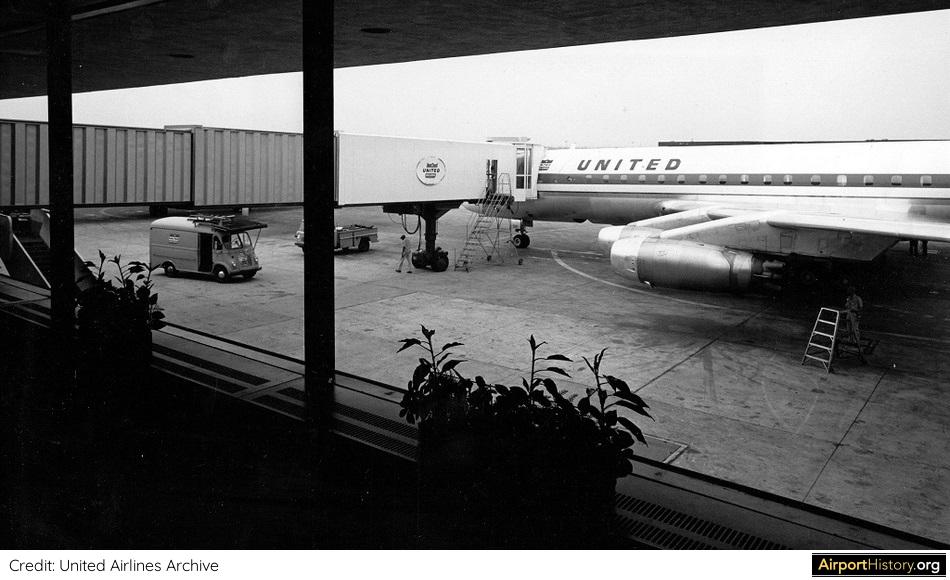 United had hoped to have the terminal ready for its launch of jet services on September 18, 1959, but the opening slipped back to October 15, 1959. On that day the airline shifted 250 workers and its 42 daily flights from the temporary facilities to the new terminal, half a mile away. ​

Having cost USD 14.5 million, United's terminal would initially handle 2,000 passengers per hour at peak times, but according to the airline's forecast, this was expected to double by 1961. Late or not, the United terminal has the distinction of being the first terminal to open that was designed for the Jet Age. ​

Delta, which flew Convair 880s and DC-8s to fly from Idlewild to Atlanta, Houston and New Orleans, was able to move into its section of the terminal on July 21, 1960.
We will revisit United's terminal later on to follow up on developments after its opening. Click below to read the next part, where we will explore the design of the Eastern Air Lines terminal.

I want to give a special thanks to David Kaufman and Shea Oakley, commercial aviation historian. These two JFK Airport knowledge powerhouses provided great insights and feedback on this article. Thanks, Gents!