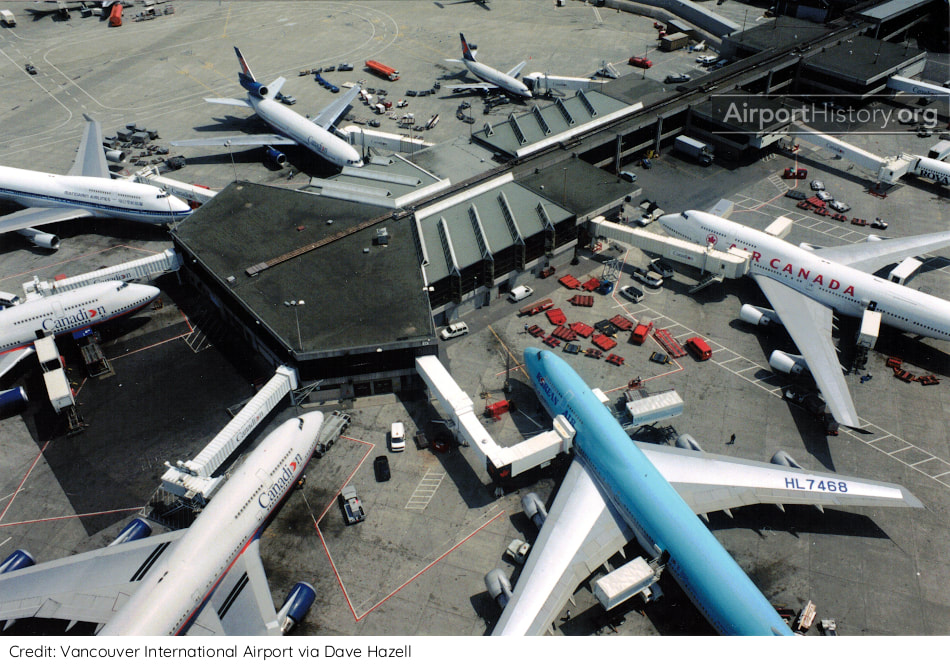 By Marnix (Max) Groot
Airport Development
Expert and Historian
Published: July 21, 2021
Updated: September 2, 2022
In 2021 Vancouver International Airport celebrated its 90th anniversary. In this photo special, featuring many never-seen-before images, we'll take you on a journey from the early Jet Age up to the year 2000.

​During this period "YVR" transformed from a modestly-sized airport into a bustling trans-Pacific hub, and one of the world's leading airports. 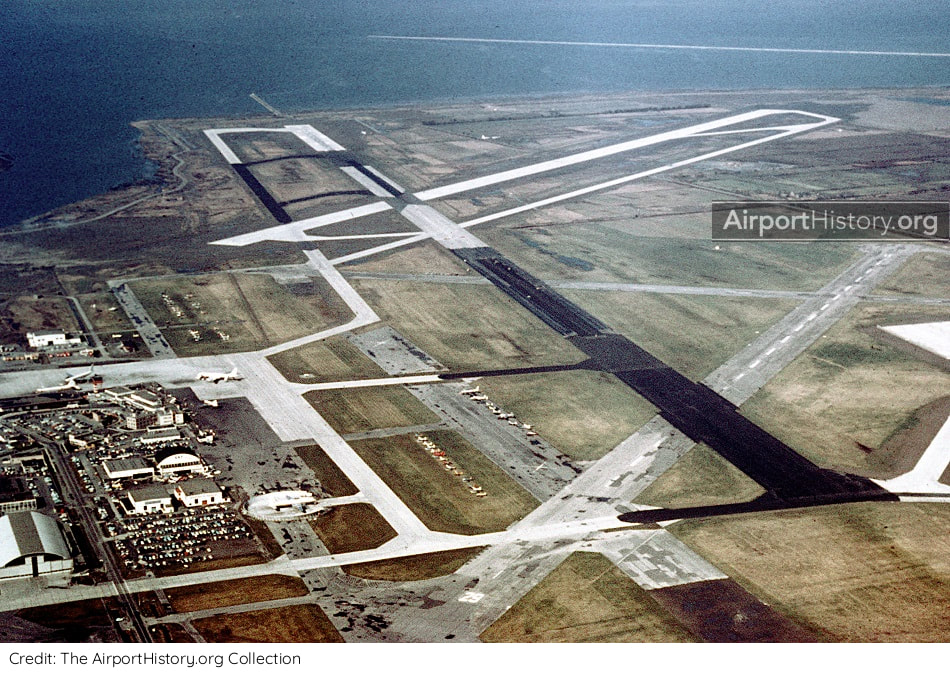 In order to get our bearings, we start with this very rare color aerial, taken ca. 1962.  Looking northwest over Sea Island, we can see Vancouver International Airport's main runway 08/26, which is being resurfaced . The 8,600-foot (2,621-meter) strip was constructed in 1953 at a cost of CAD 1.5 million. When it opened it was the longest commercial runway in Canada. It replaced the original runway, part of which is still clearly visible here.

In 1961, a new runway 12/30 was built (top of image). The airport's passenger terminals were located south of the main runway (left in image). To the right, just outside of the image, is Trans-Canada Air Lines' new maintenance complex which opened in 1961. 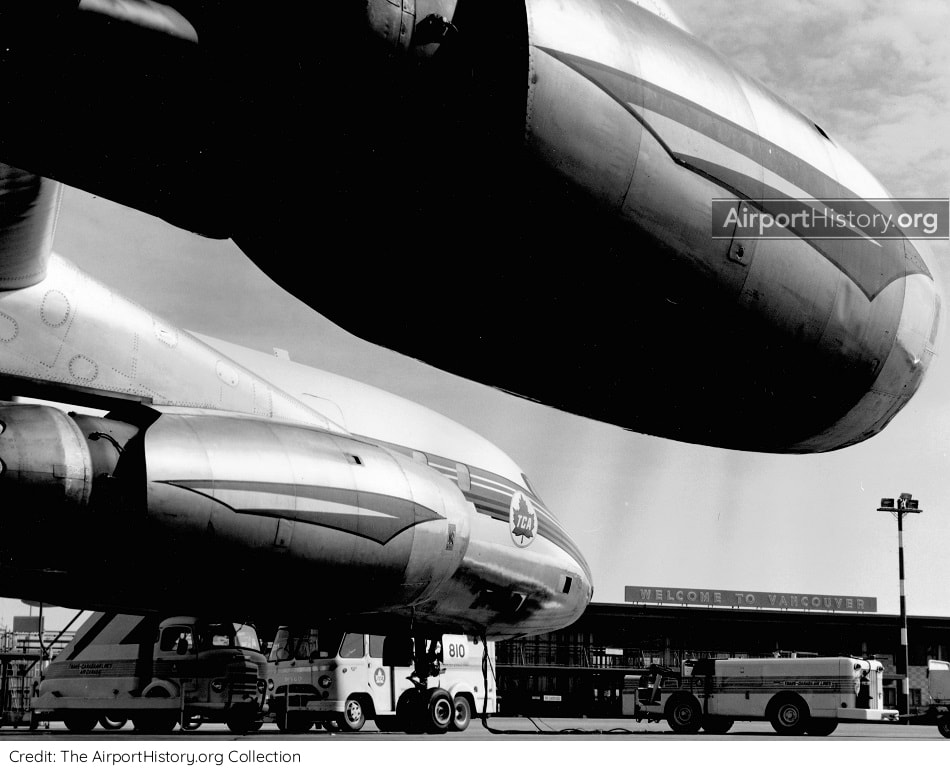 It doesn't get any more early Jet Age than this image: A Trans-Canada Air Lines (later Air Canada) Douglas DC-8-40 is parked in front of the passenger terminal, called the "West Terminal" ca. 1961. The West Terminal was opened on July 1, 1957 and supplemented the existing North Terminal.
GALLERY: THE SOUTH TERMINAL DURING THE 1960S (CLICK TO ENLARGE) 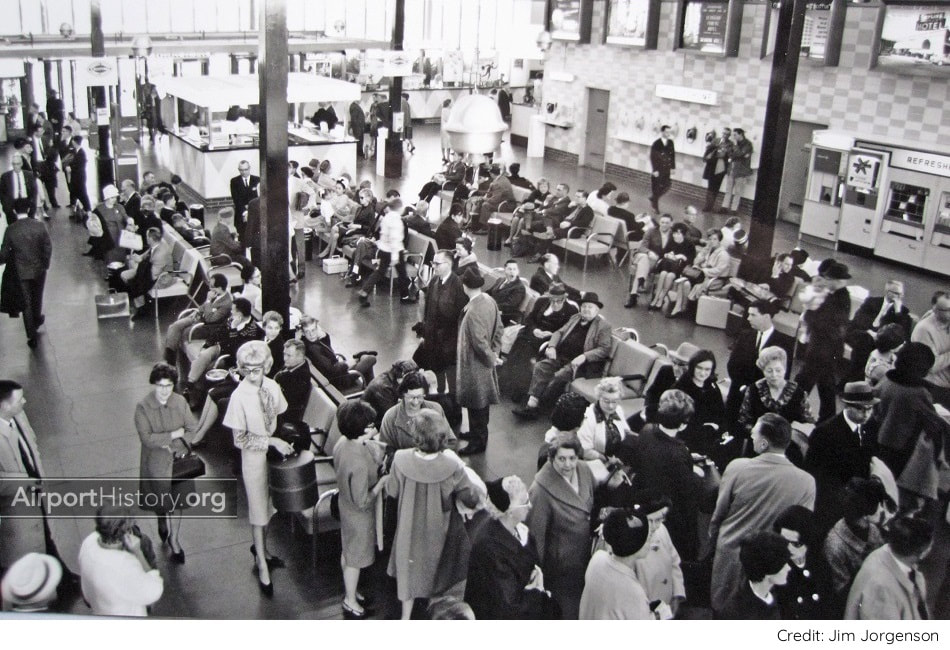 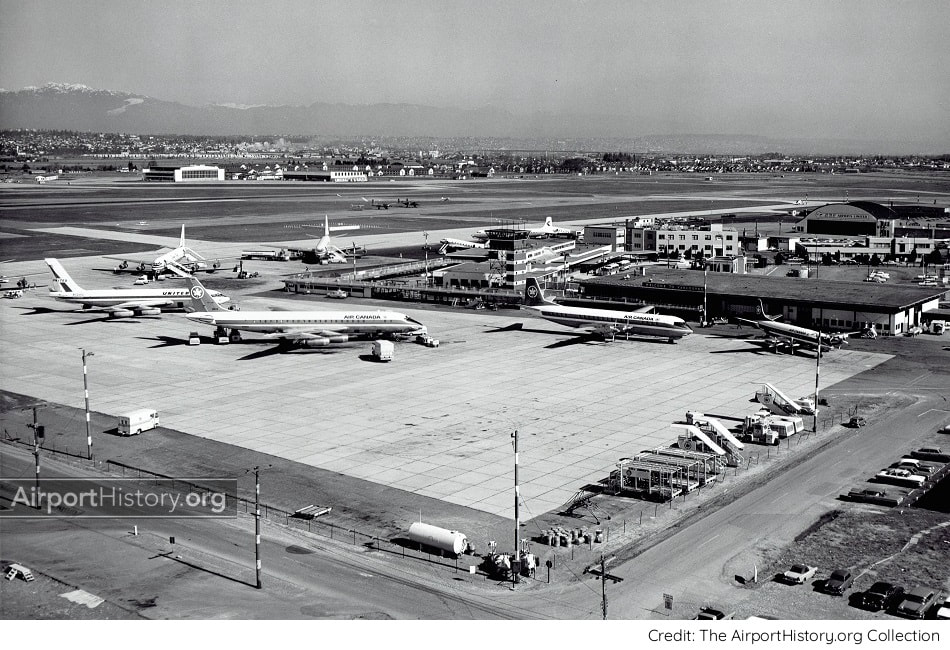 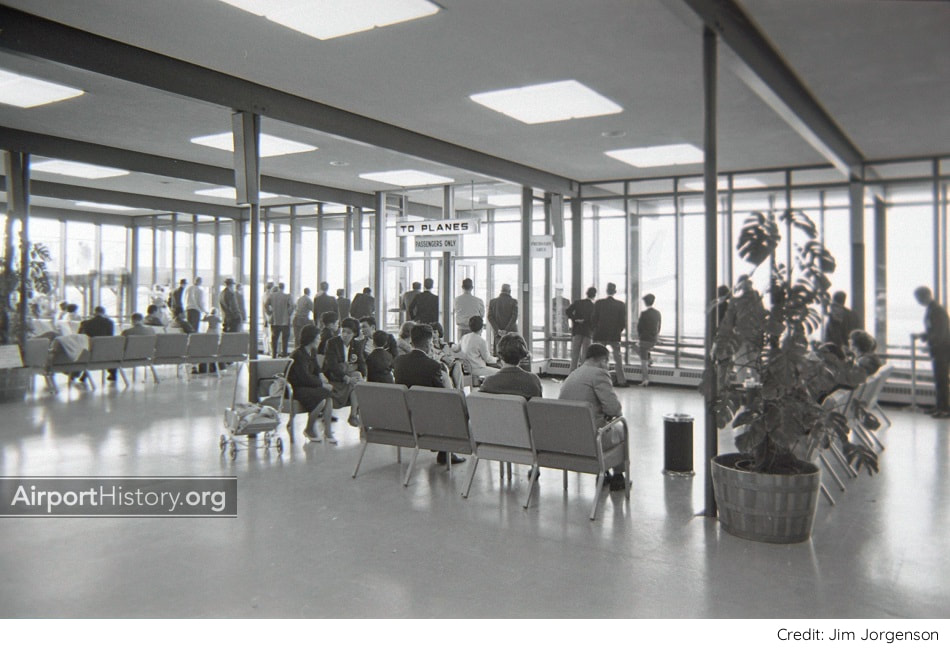 The 1957 blueprint for Vancouver Airport's future development. Even as a brand new terminal had just opened, planners were already looking ahead at the requirements of the upcoming Jet Age.

The plan envisaged construction of a modern passenger terminal complex north of the main east-west runway. A parallel east-west runway of 10,800 feet (3,290 meters) would be added on the north side of the new terminal. This arrangement would allow simultaneous takeoffs and landings without interference under all weather conditions.

A rare artist's impression of Vancouver's "future" Jet-Age terminal. The new terminal would incorporate all the latest insights in airport development: it would be a multi-level building, designed for separation of passengers, baggage, and cargo handling. Passengers would be able to board the airport by means of passenger boarding bridge, a new innovation at the time. What's more, ample space would be provided for restaurants, shops and airline lounges.

Following negative experiences with Toronto's new Aeroquay, which could not be expanded, planners made sure Vancouver's new terminal had plenty of room to expand as demand grew. 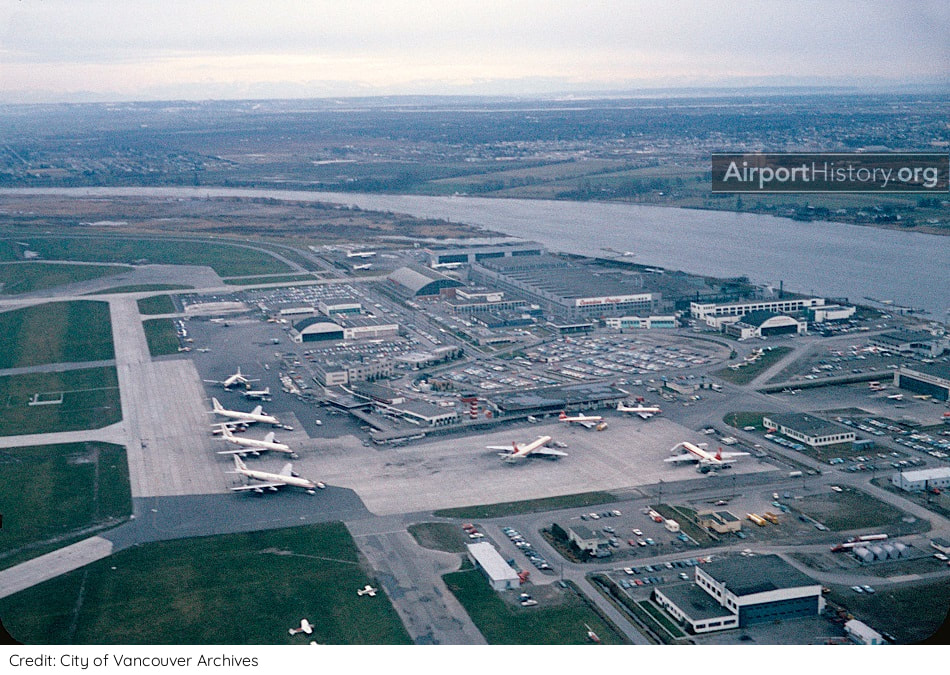 A 1968 aerial view of Vancouver Airport's bustling passenger terminal area, shortly before the opening of the new  terminal on the far side of the runway.

The Jet-Age terminal opens for business (1968) 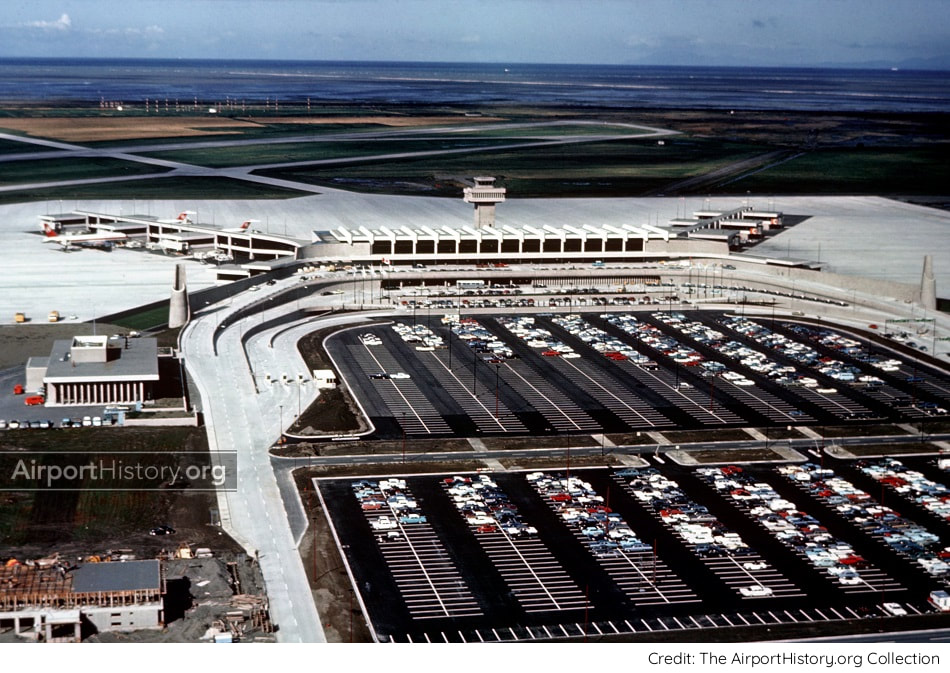 A view of the new passenger terminal taken shortly after becoming operational on September 10, 1968. The CAD 32-million terminal boasted a design capacity of 3.5 million passengers annually and 23 gates, 17 of which were served by passenger boarding bridges. The new terminal was officially dedicated on October 25, 1968. In 1969, Vancouver handled 2.25 million passengers.

​Technology has been moving so fast that many airport terminals are obsolete the day they open. Not so at Vancouver. Ours is the most modern air terminal in Canada and it won't be outdated soon because it's designed to expand.
- YVR Airport Manager Bill Inglis at the opening of the new terminal on October 25, 1968 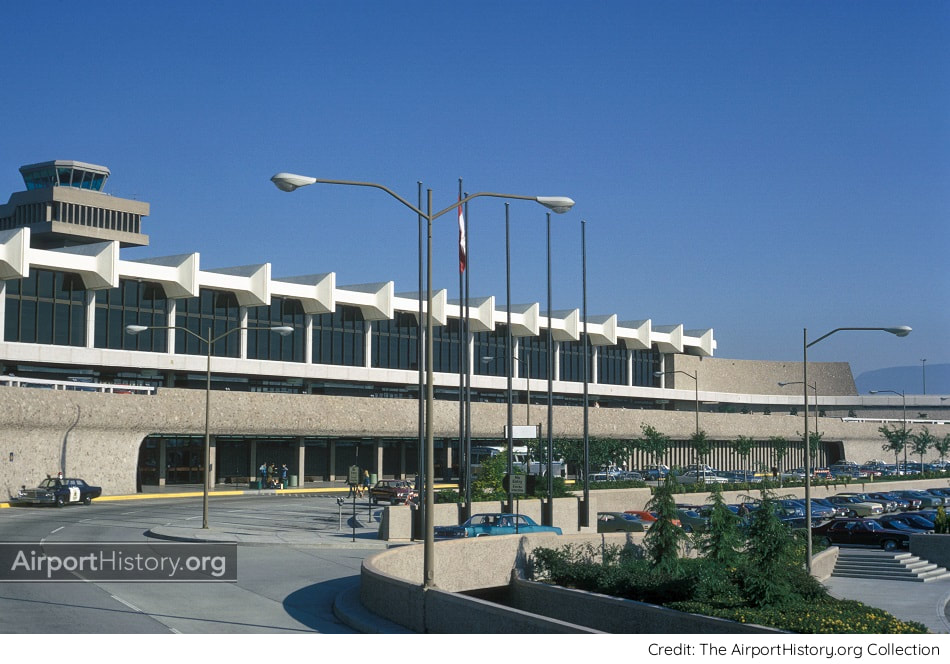 A 1970 view of the passenger terminal, which was locally designed by Thompson, Berwick & Pratt Architects, and  Phillips, Barratt & Partners, Consulting Engineers.

The terminal is a four-level structure. In its initial layout, international arrivals and Customs and Immigration were located on the first level; domestic arrivals and US departures on level two; domestic and international departures on level three; and general offices, public facilities and airline first-class lounges on the uppermost level four. 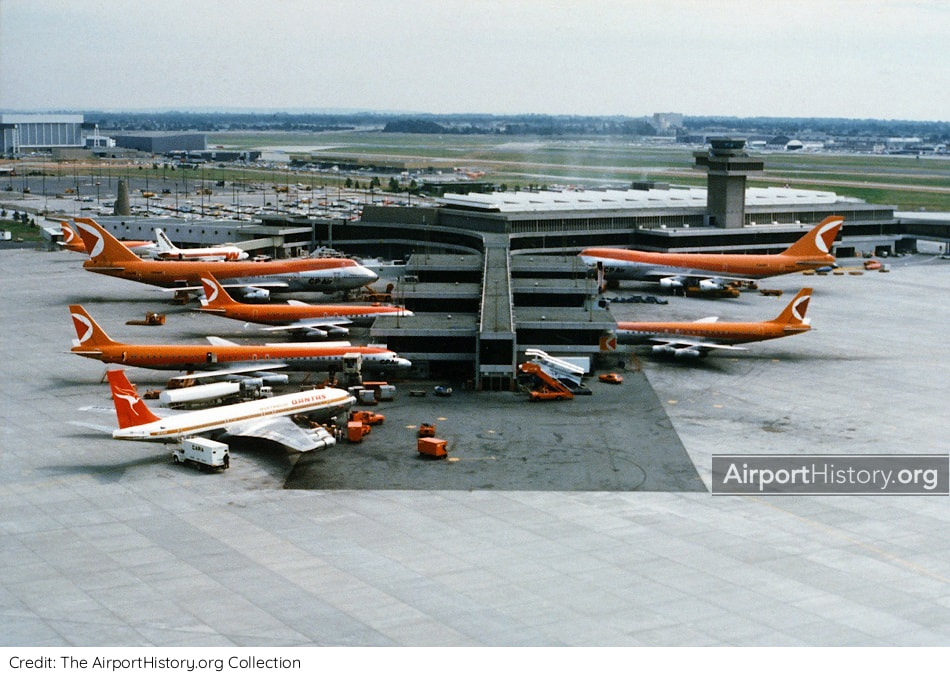 A fantastic aerial of the North Pier ca. 1977, with most of the gates being occupied by CP Air. 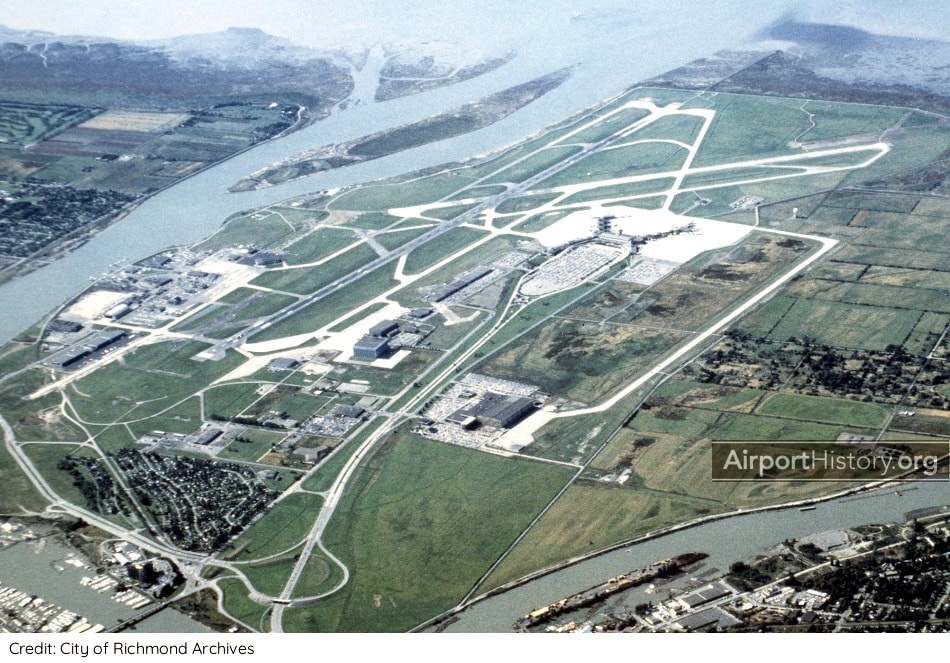 ​A 1982 aerial shot looking west, showing the old terminal area (middle left of image) and the 1968 terminal (center right of image). After the opening of the new terminal, the old terminals were converted to other uses. The West Terminal initially became a cargo terminal and currently is used by regional airlines serving British Columbia.

​The old North Terminal became a general aviation terminal and was destroyed by fire in 1976, the second time a fire had destroyed a passenger terminal at YVR. Also visible (lower middle of image) are the maintenance facilities developed by Air Canada and CP Air on opposite sides of the airport access road, named Grant McConachie Way. More about that below.
​Did you know?
YVR is located on a dike-walled island 3 feet (1 meter) below flood level of the Fraser River. A network of drains, culverts, and a pumping system ensure the airport is not flooded.

A report identified Vancouver as one of the areas especially at risk by sea-level rise. In an effort to safeguard against major floods of the future, it has invested significant resources into a multi-year program to raise dikes to 15.2 feet (4.7 meters) above mean sea level.
Vintage aerial footage of the passenger terminal shot in 1984. Includes a quick glimpse of a Frontier 737-200 and Pacific Western Airlines 767-200! Credit: BC Archives 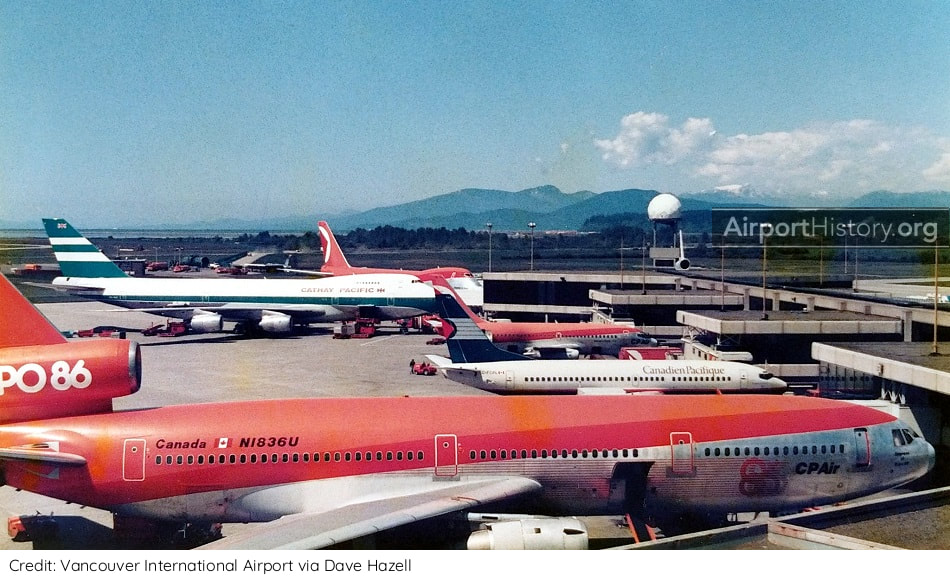 A fantastic 1986 view of the South Pier. During the 1980s, YVR saw tremendous growth for international air service. British Airways became the first European scheduled carrier to operate between YVR and London in the early 80s.

Cathay Pacific Airways and Lufthansa began operations in 1983 and KLM followed in 1986. Canadian Airlines began its first service to mainland China with direct flights to Shanghai, and Air China joined the roster in 1989 as the first carrier based in the People's Republic of China to operate at YVR.

In 1995, YVR handled 11.1 million passengers. Several terminal extensions had been carried out to the in order to cope with growth, including extensions of the main piers. 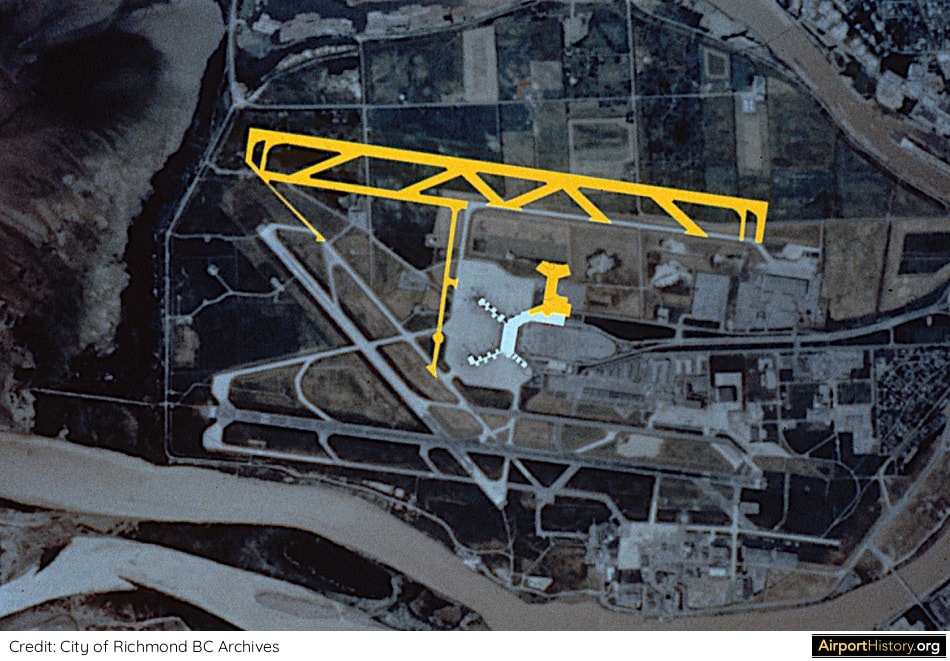 As traffic boomed in the 1980s, planners needed to consider how to accommodate future growth. In 1990 plans were finalized to build a new 9,940-foot (3,030-meter) parallel runway and a new International Terminal Building (ITB). The expansion would give YVR the layout we're familiar with today.

As we saw earlier, the plans to build a parallel runway dated all the way back to 1957. In 1972, the airport first officially proposed to build the parallel runway (pictured above in yellow). However, a public controversy ensued and stopped the project in its tracks. Construction of the runway, together with the ITB, was finally approved in January 1993 with a budget of CAD 355 million. 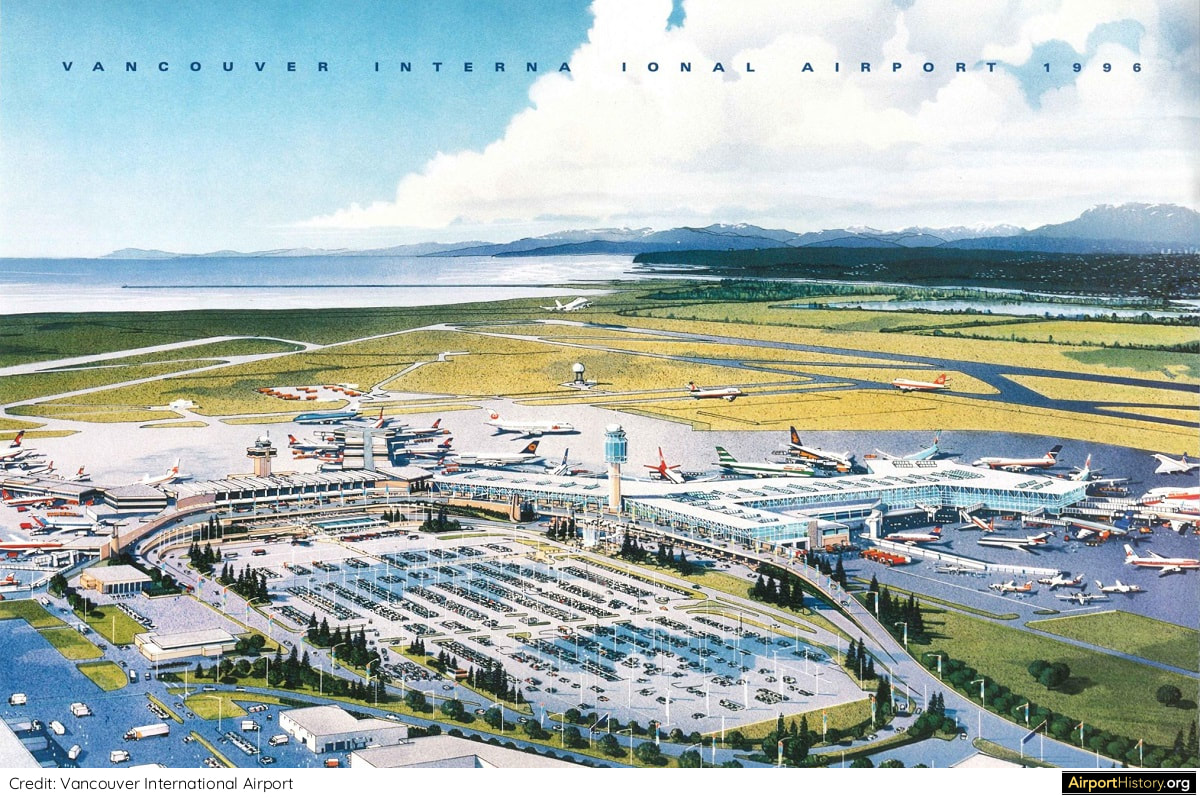 An early 1990s artist's impression of the "future" International Terminal Building. The terminal was designed by Stantec, which had no airport design experience at the time. However, it did have plenty of experience in creating a sense of place and maximizing revenue potential through design, and this proved critical.

At the time the market was shifting as the Canadian airport system had recently been privatized. With this, airport owners and operators were looking for ways to change their terminals from processors of people and baggage to experiences that residents and visitors alike would enjoy and remember. Since designing the ITB, Stantec has gone on to design airport terminals around the world. 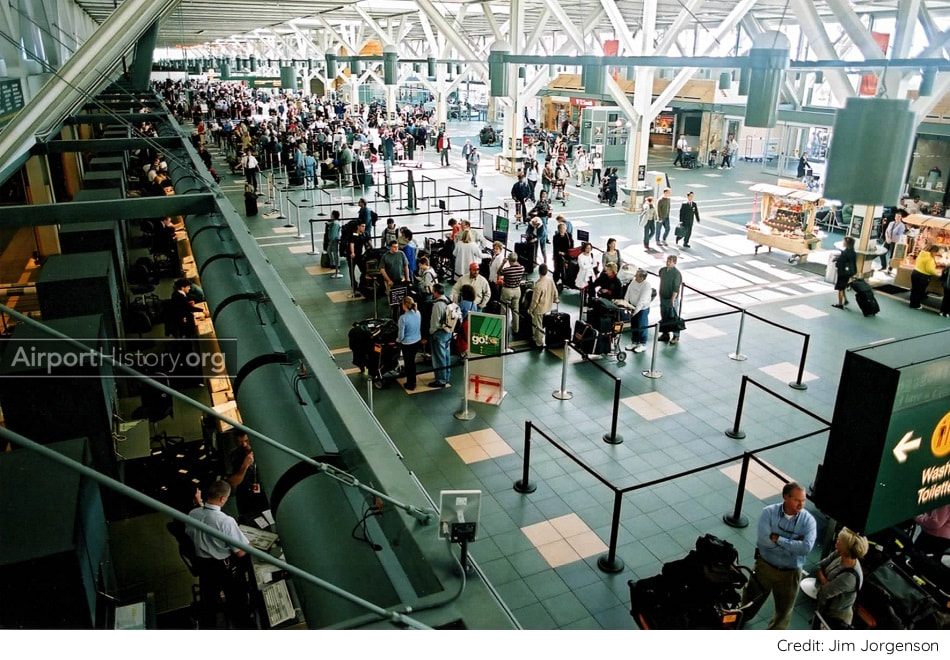 The check-in hall of the completed International Terminal Building, which was fully opened in June 1996.  Having cost CAD 250 million, the ITB boasted a total of 105,000 square meters (1.1 million square feet) of floorspace. The terminal featured 113 check-in positions, 50 Canadian Inspection Services (CIS) positions, and had a capacity of 11 million annual passengers. 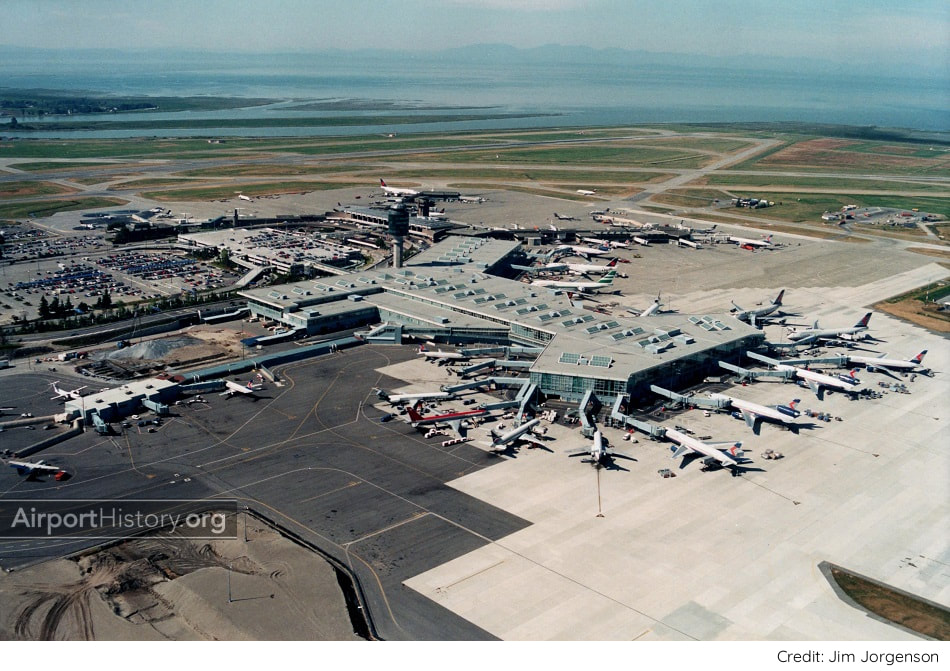 A 1997 aerial view of the ITB, which featured 15 gates served by boarding bridges as well as a separate concourse for commuter aircraft (left in image). Visible in the middle of the image is the new CAD 20-million air traffic control tower, which was built along with the ITB.

​Another major project was the construction of a multi-level parking garage, called "Parkade" in Canada. The Parkade could accommodate up to 2,080 vehicles. 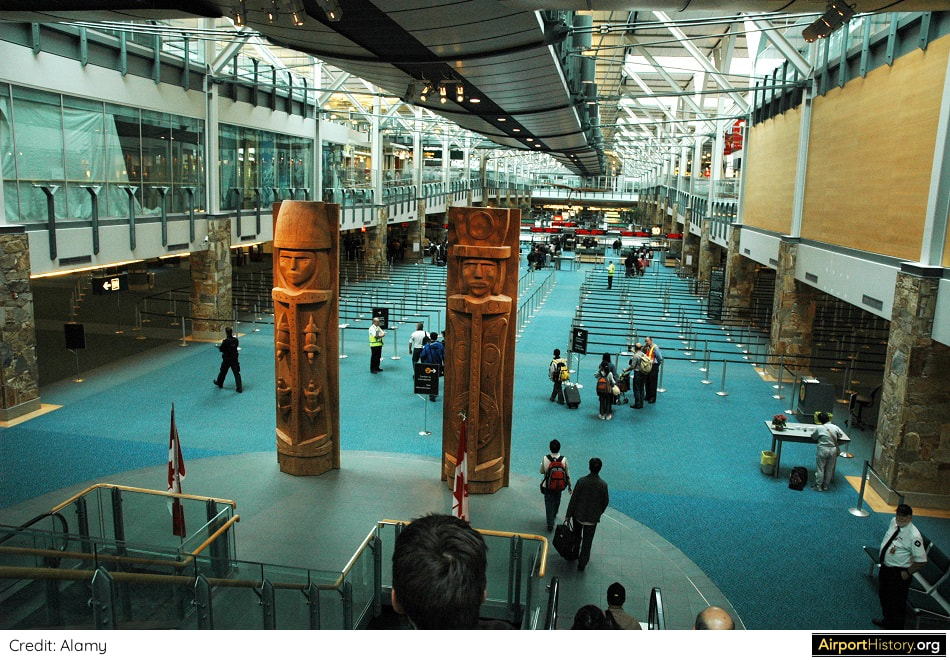 The immigration area of the ITB. It was decided early in the project that British Columbia's rich aboriginal heritage would be the key cultural art focus of the new ITB. The themed areas have won wide acclaim with the First Nations, passengers and the art community. Vancouver International Airport is now considered to have one of the more important aboriginal art collections in British Columbia. 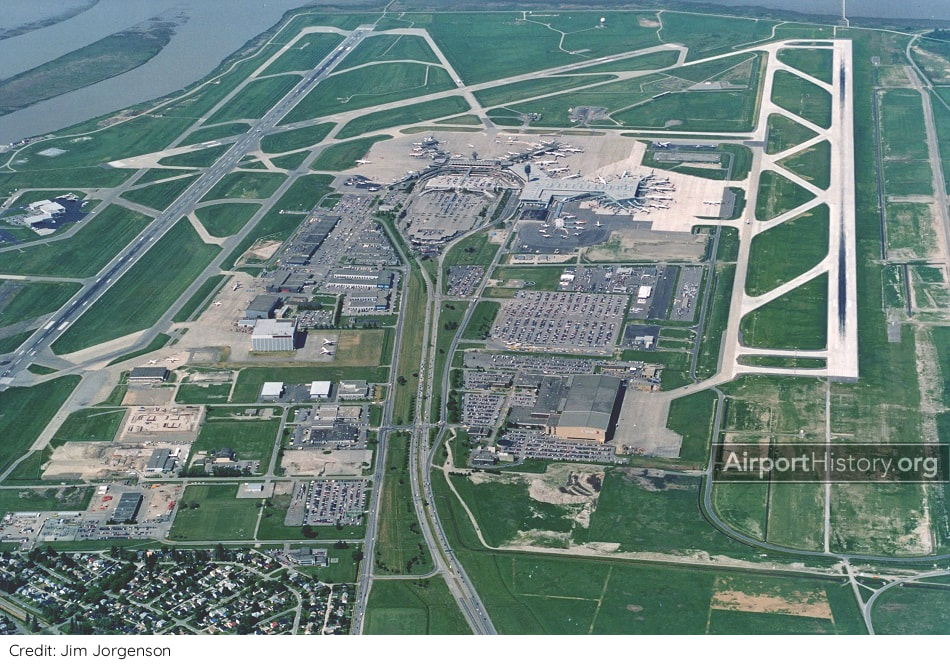 We close this feature with this aerial image looking west, taken in the year 2000, during which YVR handled 15.1 million passengers. After the opening of the third runway (right in image) in 1996, we can now clearly recognize today's YVR. Having said that, numerous developments have taken place since, developments which AirportHistory.org will chronicle sometime in the future!
We hope you enjoyed our tribute to YVR! Would you like us to cover the airport's early and more recent history as well? Let us know in the comments below!
​ACKNOWLEDGEMENTS

I want to give a special thanks to Dan Farrell, Dave Hazell, Jim Jorgenson, Thomas Kim, Danielle Palfery, and Henry Temby, whose kind assistance made this article possible.
​See more airport articles

Do you have memories of Vancouver? Share them below!